Republican members of Congress, aides and onlookers have expressed their frustration with Capitol Police and Democratic leadership for canceling votes Thursday due to an unknown security threat.

The Daily Caller spoke with a number of Republican members, including Ohio Rep. Jim Jordan, Georgia Rep. Jody Hice, and Ohio Rep. Warren Davidson, who all slammed Democratic leadership for calling off votes Wednesday night after Capitol Police announced that a militia group possibly posed a threat to the Capitol’s security on March 4. The Senate is still in session.

United States Capitol Police (USCP) announced Wednesday that it would increase security around the Capitol building following reports of a threat on March 4, citing intelligence that a militia group, which it did not name, was possibly plotting actions against the Capitol.

March 4 is a day considered important by some QAnon conspiracy theorists. Followers of the conspiracy theory believe that former President Donald Trump will be sworn into his second term of office on March 4, since presidents were inaugurated on March 4 before Franklin Roosevelt’s second inauguration in 1933, according to USA Today.

The House’s acting Sergeant at Arms later circulated an email to all members of Congress in which he recommended that members “consider telework options through Saturday for staff who don’t need to be onsite.” The email, obtained by the Daily Caller, explains that Capitol Police will be sending extra officers to the Capitol due to “additional interest in the Capitol for the dates of March 4-6 by a militia group.”

The Daily Caller contacted Capitol Police and USCP chief of staff Salley Wood about the possible “security threat” they mentioned in their press release, to which they did not respond after multiple inquiries.

The members of Congress the Caller spoke with shared their frustrations with Democratic leadership and wondered why the Senate was still in session.

“Only Speaker Pelosi knows why. She’s the one who made the decision. So, some people said there was a threat. Some people haven’t. Who the heck knows? I haven’t gotten any briefings. Most members of Congress haven’t got any briefings to say that there was some kind of threat that warranted us not being here,” Jordan told the Caller.

“I guess the good news is, it’s one less day that the Democrats can pass ridiculous, crazy policy. Of course on the other hand, if there was a real concern, shouldn’t we be showing people who want to do harm that we’re working and not intimidated by it,” he continued.

Jordan went on to say that Democrats are “totally opening up the southern border while you’re building a wall around (the Capitol). So you can’t have a wall to protect the country, but you can put razor wire and a wall around the Capitol to protect the politicians. I heard John Ratcliffe the other day say there’s no intelligence that says that you need any such measure here at the Capitol.” 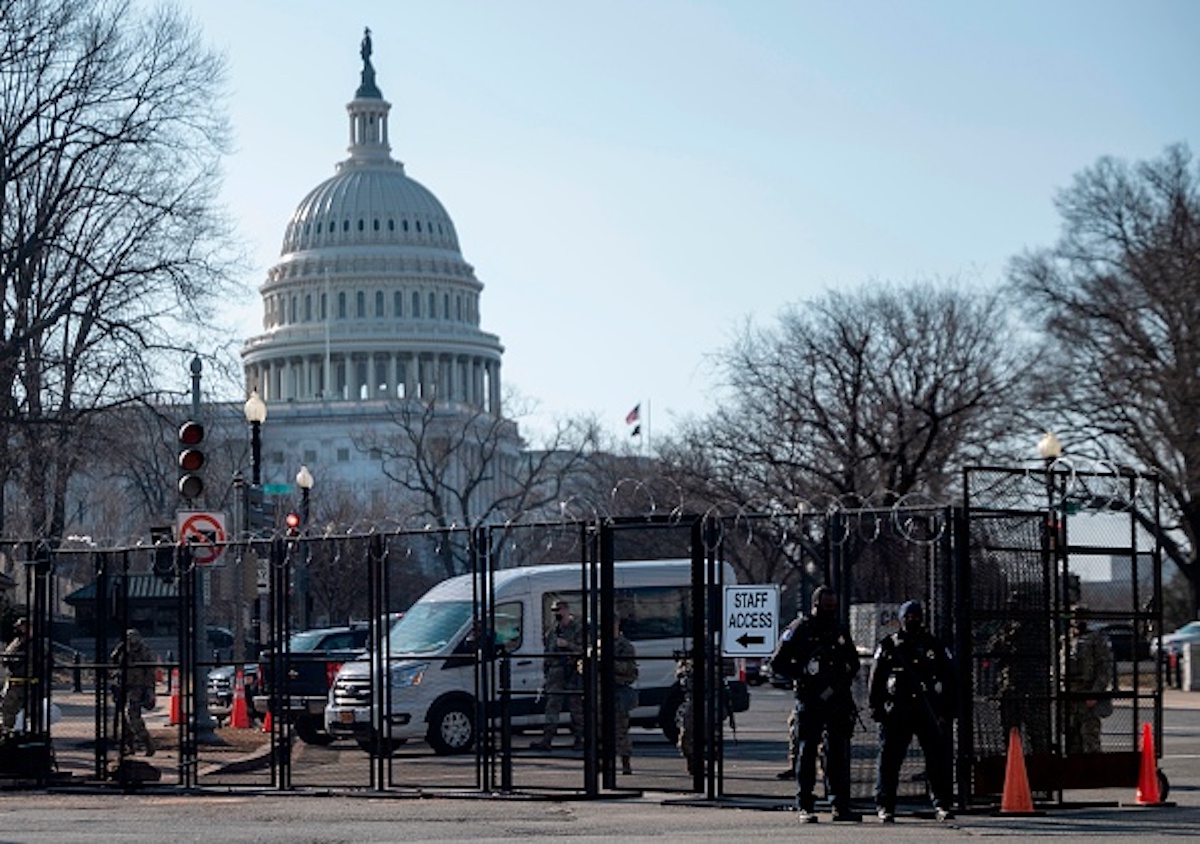 US Capitol police officers and US National Guard soldiers guard an entrance to the Capitol grounds in Washington, DC, on March 4, 2021. (Photo by ANDREW CABALLERO-REYNOLDS/AFP via Getty Images)

The FBI confirmed to The Washington Post, with regard to threats on the Capitol for March 4, they “don’t have any indication of violence or a specific, credible plot at this time.”

“Even as Democrats continue to hide behind barbed wire fencing and an army of law enforcement, Speaker Pelosi has rammed through legislation to undermine and defund police departments across America. This bill, H.R. 1280, might as well be called the ‘Disable the Police Act.’ Concerned for their safety, House Democrats have canceled legislative business for the remainder of the week — the Senate, meanwhile, remains in Washington working,” Hice told the Daily Caller.

“Why is it the House isn’t able to vote today, but the Senate is still working on President Biden’s $1.9 trillion COVID bill? It’s also worth noting that members weren’t briefed on the security threats,” Davidson told the Caller.

Rachel Bovard, the Policy Director at Conservative Partnership Institute, explained her frustration with the decision to cancel votes in the House.

“This is transparently security theater. The FBI has confirmed no evidence of a plot. The Senate is working, likely overnight, as it considers reconciliation legislation. This is unnecessary political opportunism that has nothing to do with any real threat of violence or even protest,” Bovard said.

Onlookers on Twitter immediately began asking questions after the decision was made and there appeared to be no real “threat” on the Capitol.

Chris Bedford, a senior editor at the Federalist posted a video of himself outside of the Capitol, asking where the alleged insurrection would be taking place. (RELATED: Pentagon Reportedly Reviewing Request For National Guard To Remain At US Capitol For 60 Additional Days)

I was told there was going to be an insurrection? Guys you’re making me feel kinda silly down here. pic.twitter.com/E2peIa6gvc

Saagar Enjeti, the host of “Rising” on Hill TV, said he believes the military presence is an “overreaction.” (RELATED: House Cancels Scheduled Votes After Report Of Possible Threat To Capitol, Senate To Stay In Session)

This is outrageously expensive, unnecessary, and a ridiculous overreaction https://t.co/vsBe0cPwr4

Police officials did not announce a link between the QAnon theory and the stated threat.