Pope Francis’ upcoming visit to Iraq will happen amid a pandemic and recent rocket attacks targeting air bases in the country, making it an especially dangerous trip.

The long-awaited historic visit has been eagerly anticipated by the country’s dwindling Christian population, the future of which could be greatly impacted by the Pope’s activities in the country. 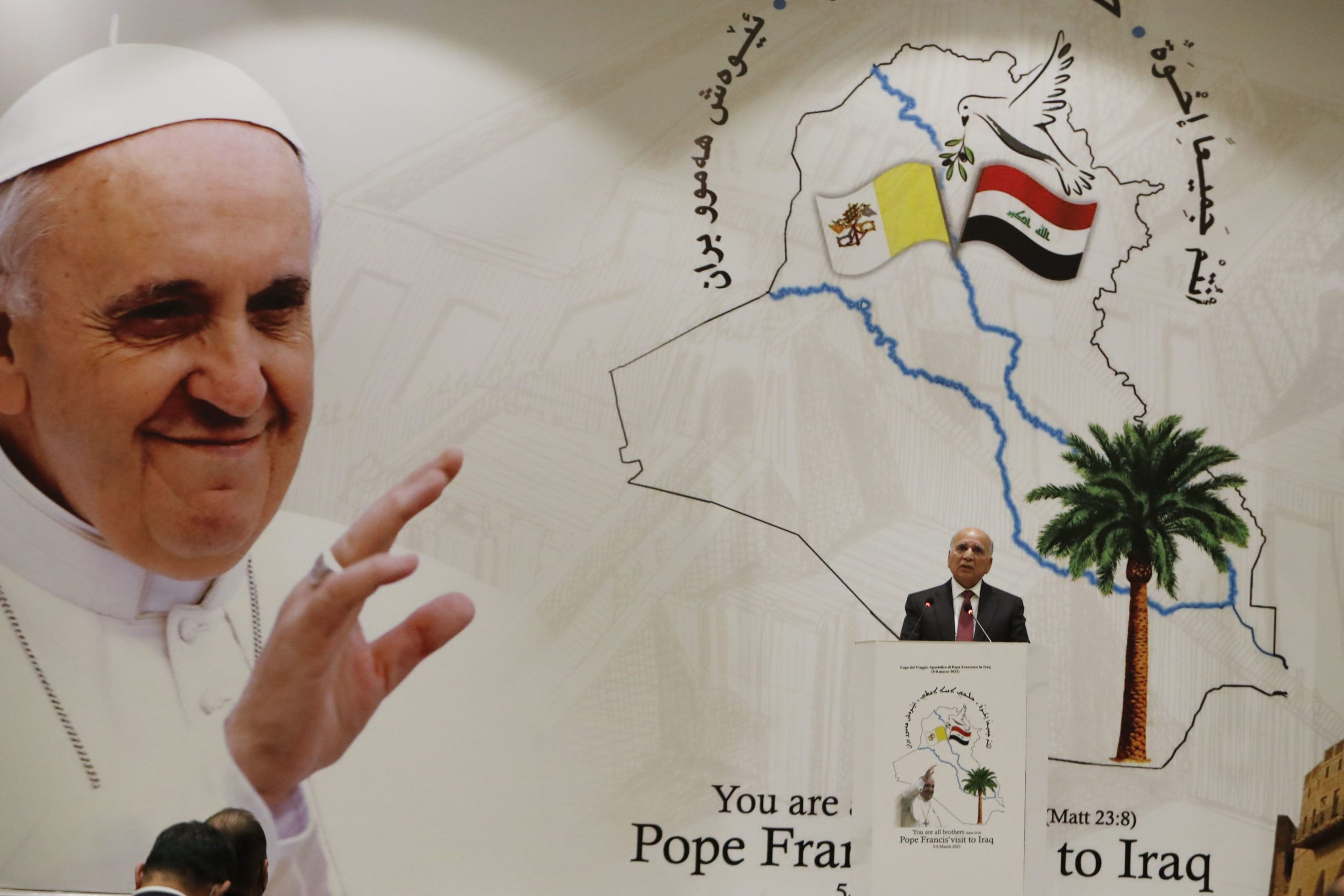 Iraqi Foreign Minister Fuad Hussein holds a press conference at the Babylon Hotel in the capital Baghdad, on March 4, 2021. (Photo by SABAH ARAR/AFP via Getty Images)

The March 5-8 visit will make Francis the first Catholic pontiff to visit Iraq after John Paul II was unable to visit in 2000 when negotiations with Iraqi leader Saddam Hussein broke down.

Christian leaders and advocates in Iraq are hoping Francis will bring words of hope to Christians in the country and that the visit will turn the world’s attention to the plight they face after years of persecution and displacement.

Catholic priest Father Benedict Kiely, who devoted his entire ministry to aid the persecuted, has traveled to Iraq several times and keeps in regular contact with church leaders and residents who still live in the country. He told the Daily Caller that the Pope’s visit could have the potential to be a watershed moment in the history of Iraq’s Christian community.

“In a sense, it’s long overdue. It wasn’t possible for the Pope to go before this time and I’m very glad, and I think all Iraqi Christians are very glad he’s coming,” Kiely said.

“The principal hope which I heard directly from people and priests there is that the visit focuses the world’s attention on the persecution, on what happened to them, and that world governments and media look again and acknowledge what happened.”

The exodus of Christians from the region has been attributed to a number of factors, inlcuding persecution and conflict. The U.K.’s former foreign Secretary Jeremy Hunt ordered a report published in 2019 that found that since the U.S. invasion of Iraq in 2003, the country’s Christian population had fallen from 1.5 million people to less than 120,000. 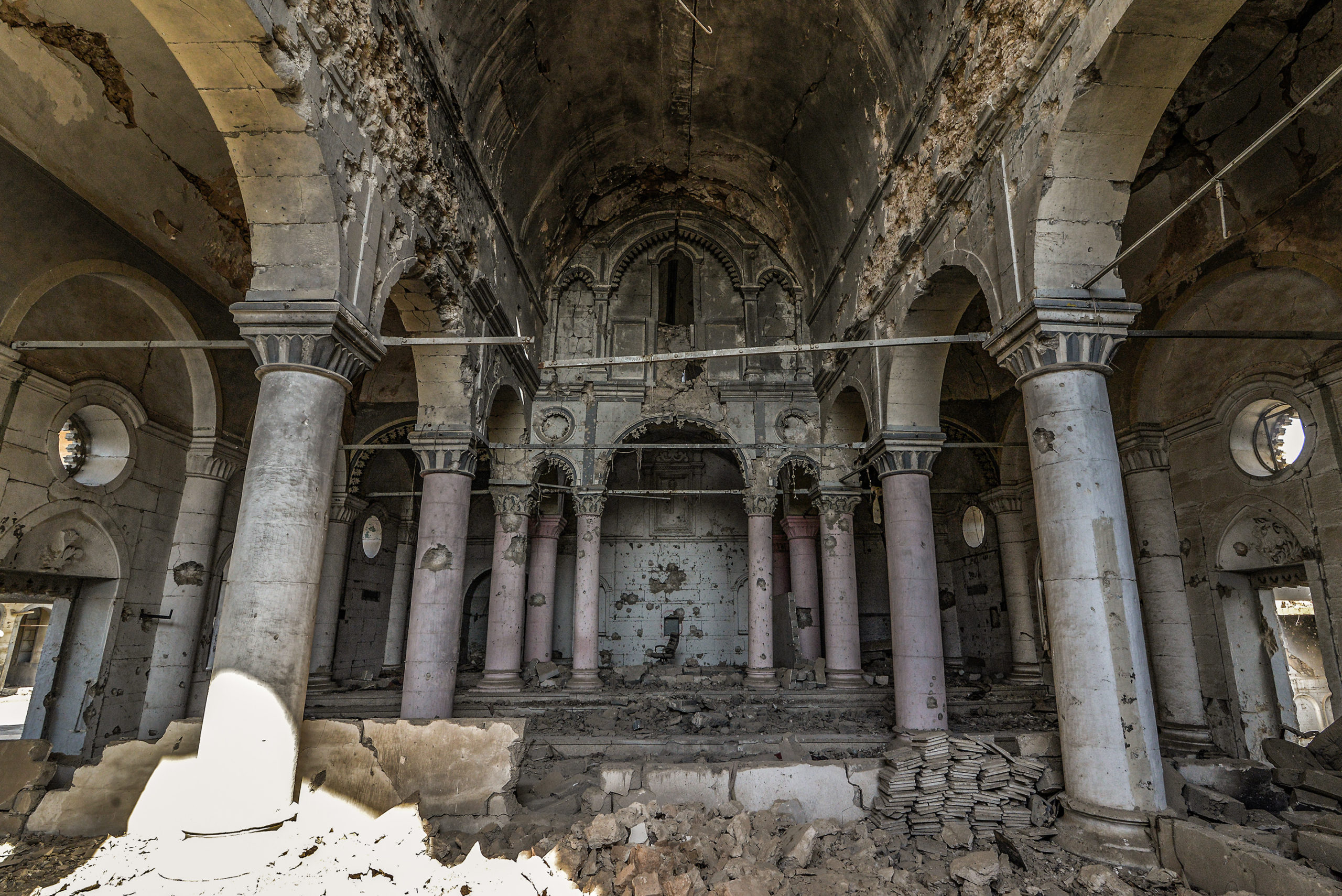 This picture taken on February 27, 2021 shows a view of the interior of a devastated Catholic school building in the old city of Iraq’s northern city of Mosul, which has remained in a state of devastation since the battles to oust Islamic State (IS) group fighters in 2017, and where Pope Francis is expected to visit in March. (Photo by Zaid AL-OBEIDI / AFP) (Photo by ZAID AL-OBEIDI/AFP via Getty Images)

Christians in Iraq have faced multiple waves of persecution over the last century, most recently at the hands of ISIS. The terrorist organization killed Christians as they worshipped in church and often marked their homes with the Arabic letter “N” which meant “Nasrani,” or Christian. ISIS destroyed some of Iraq’s ancient Christian sites like Dair Mar Elia, the oldest monastery in the country, during its campaign. In Mosul, most churches within the city were destroyed. (RELATED: Future Of Middle East Christians Looks Bleak, Experts Say — Will A Biden Administration Take Steps To Protect Them?)

Although United States Agency for International Development (USAID) has provided more than $389 million in support of the Genocide Recovery and Persecution Response initiative to help ethnic and religious minorities after ISIS carried out genocide against them, Kiely and Nadine Maenza told the Caller that Christians are continuing to leave the country due to lack of jobs and security.

Maenza, a commissioner at the United States Commission on International Religious Freedom (USCIRF) said she’s hoping the Pope’s visit will highlight the security issues Christians in Iraq face, possibly leading to policy changes that give religious minorities more control over their futures.

Maenza said that while Iraq’s Christian leaders have expressed gratitude for the U.S. aid, they were concerned about whether the aid was conducive to long-term prosperity for Christians and other religious minorities, including Yazidis, in Iraq.

“They literally said to me, ‘stop building churches,’” Maenza said. “We can’t live here with nothing. Help us with security, we need jobs for our young people and how can we have jobs if it’s not safe?” 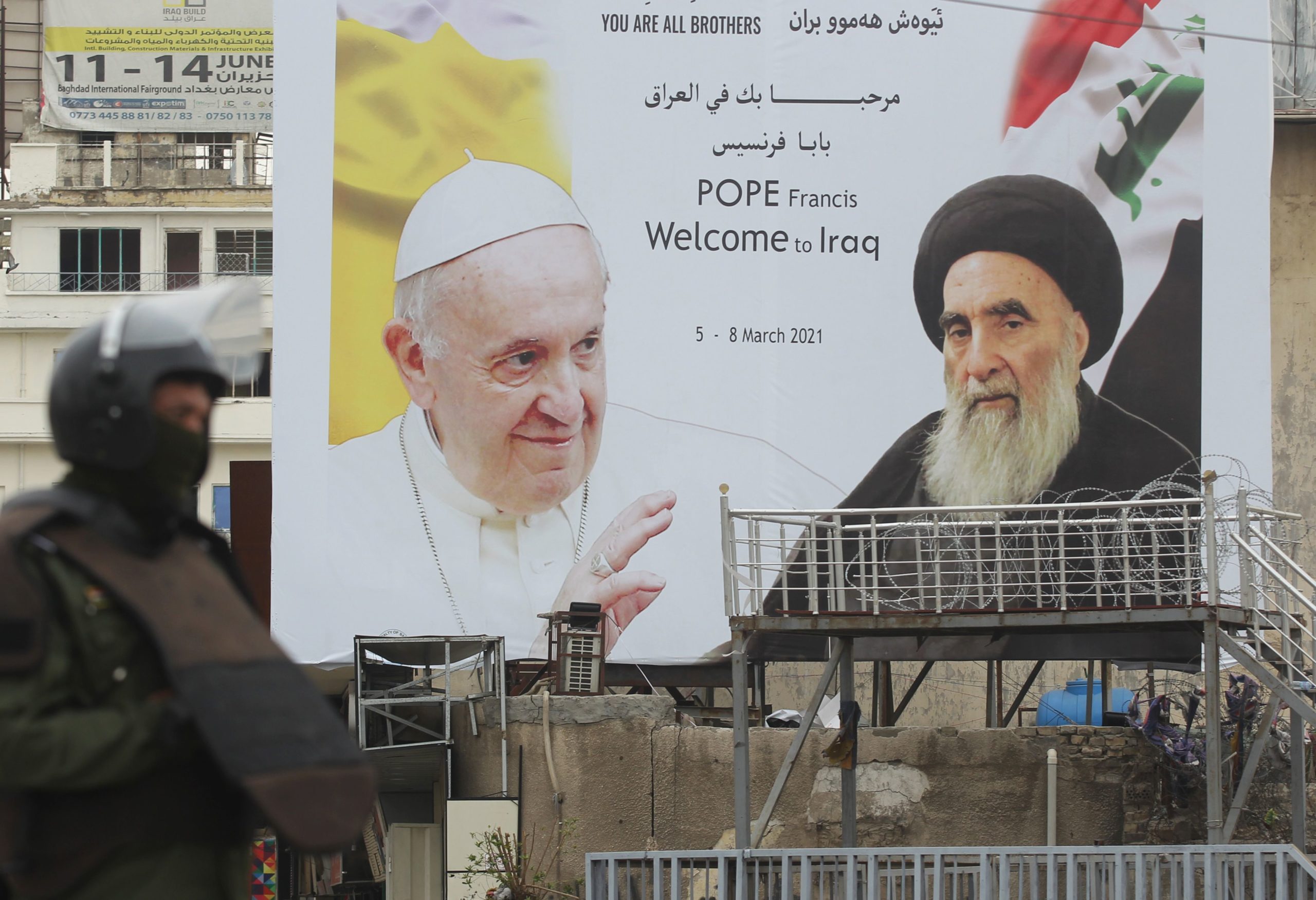 The visit will include a meeting with Iraq’s top Shiite cleric, Grand Ayatollah Ali al-Sistani, whose 2014 fatwah called on men to form militias to fight ISIS. The militias are accused of intimidating Christians and preventing them from returning home, the Associated Press reported.

Maenza also pointed to Turkey’s threats against religious minorities as contributing to fears about security. Turkish airstrikes shook Sinjar in June 2020, where Christians and Yazidis were forced to flee.

“We all know when Turkey invades they don’t leave, and they’ve used a lot of former ISIS fighters and they’ve committed atrocities against religious minorities,” Maenza said.

Kiely said that given Christians status as second-class citizens in Iraq, he hopes the Pope offers a message of solidarity with the suffering of Christians, rather than one mainly focused on coexistence between faiths.

The Pope has spent several years trying to improve relations with Muslims. In 2019, the Pope and the grand imam of al-Azar, Shiek Ahmad el-Tayeb, signed “A Document on Human Fraternity for World Peace and Living Together,” which called on Christians and Muslims to work together for the good of humanity.

But Kiely fears that inter-religious dialogue on its own would not lead to equality for Iraq’s minorities, and could risk sending the message to Christians that there is little reason to remain in the country if political leaders still seem unwilling to give Christians representation. Young people have sought work, and more critically, security, in countries throughout Europe even after ISIS lost its territory in Iraq. 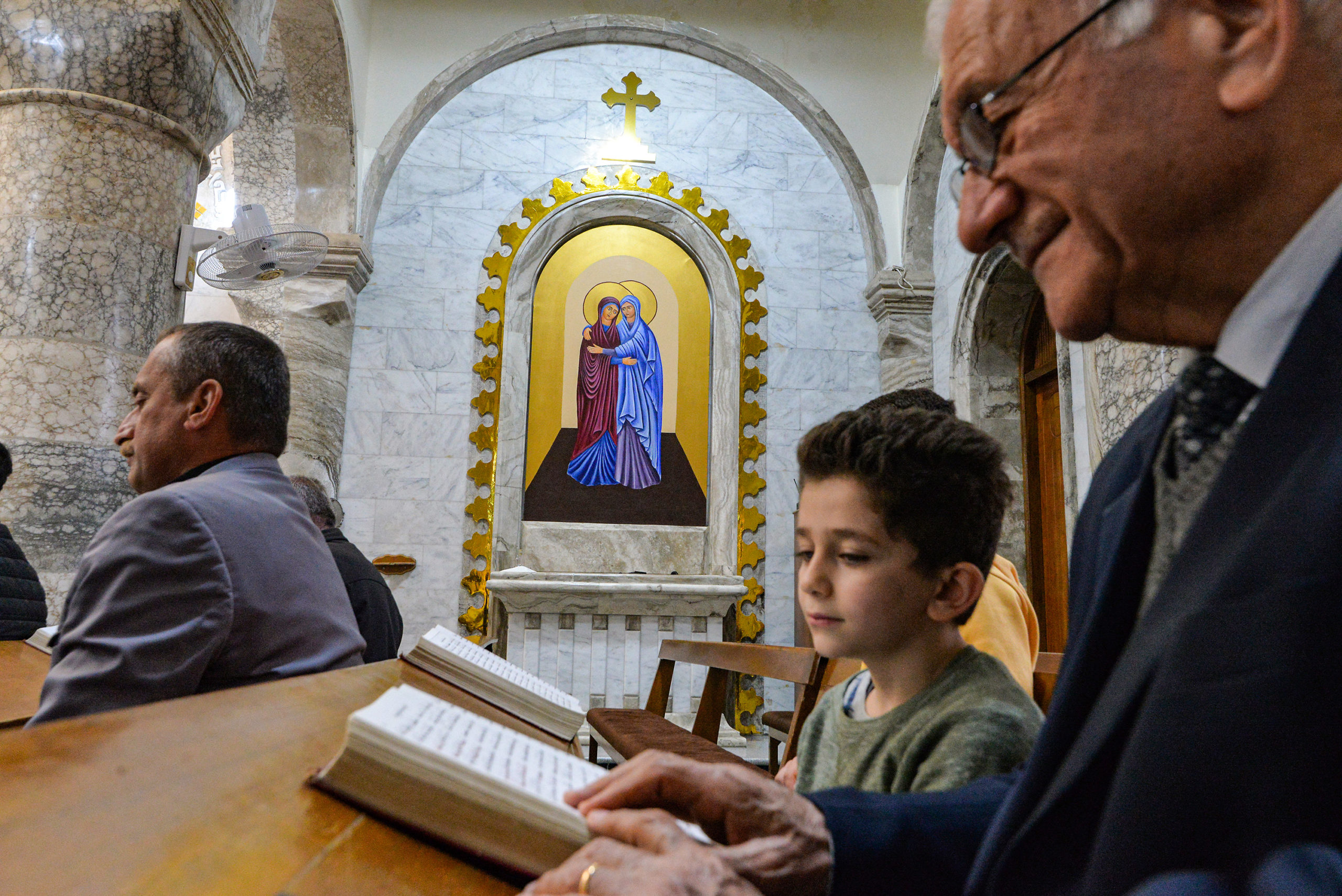 Christian worshippers attend a Saturday prayer service at the Syriac Catholic Church of the Immaculate Conception (al-Tahira-l-Kubra), in the predominantly Christian Iraqi town of Qaraqosh. (Photo by ZAID AL-OBEIDI/AFP via Getty Images)

“They don’t need to be lectured about living in peace with their neighbors,” he told the Caller. “In one town in Bartella, the local imam has told Christians in the town not to use Christian shops. That’s an economic boycott to basically try and destroy Christian businesses. [Christians] want to be equal citizens in an equal Iraq.”

“This is almost the last chance. If the Pope gives them hope and focuses the world’s attention on giving them security, then people might stay, if it doesn’t work, then the Iraqi Christian community is going to shrink to basically extinction levels.”

Maenza said that the Pope’s meeting with the Muslim leaders can only benefit Christians, but substantial change that allows Christians to stay in their homeland “is much deeper” than one conversation.

“I hope the U.S. government takes a fresh look at Iraq and how their policies could help tilt the needle for Christians there, more than just rebuilding, although that’s important. I hope economically the international community will look at Iraq and Sinjar and help them recover from ISIS.”