Tikka’s T3x rifles are well-known among hunters and precision rifle shooters alike. The Finnish brand has roots in the Tikkakoski district of the city of Jyväskylä, where the factory produced a variety of items, including firearms and typewriters. Sako bought the company in 1983, and today uses the Tikka name to sell a line of budget-friendly, but highly capable, rifles—with many components for both of the companies’ product lines coming from the same factory.

The Tikka T1x is the rimfire analog to Tikka’s T3x line of center-fire rifles; its action occupies the same footprint and can share many aftermarket stocks and accessories, such as triggers, designed for the T3x. Our sample for this evaluation is the 20″-barreled MTR version, which stands for Multi-Task Rimfire, and is chambered in .22 Long Rifle, although the company also offers the T1x with a 16″ barrel, as well as .17 HMR-chambered versions in each barrel length.

With a 20″ barrel, the rifle is 37.5″ long and weighs 5 lbs., 11 ozs.; its injection-molded polymer stock weighs 28.7 ozs. including the tightly fitted polymer trigger guard. The stock includes 35 percent fiberglass to increase rigidity, and we noted very little flex while actively trying to deflect it. Some components, such as the grip and fore-end, are modular and user-replaceable for better fit to the shooter.

We noted that the gently swept grip area is aggressively textured, but the fore-end is less so. The butt of the stock is hard plastic, and the length of pull measures 13.25″, but Tikka offers aftermarket spacers and recoil pads that would allow the shooter to customize the rifle to his or her needs. Two sling studs are located at the bottom of the stock fore and aft for convenient attachment of a carry strap or shooting aid.

The hammer-forged barrel has a six-groove, 1:16.5″ twist and features a 1/2×28 TPI threaded muzzle capped with a plastic protector. The barrel’s profile measures 0.730″ through the midpoint and muzzle, a semi-heavy pattern to split the difference between hunting and competition use. Three heavily torqued set screws hold the barrel to the action, and Tikka also applies a strong adhesive bedding compound between the barrel shank and the interior of the receiver. This feels sturdy, but the extra adhesive compound may complicate the swapping of barrels in the future.

The T1x feeds from a detachable 10-round polymer magazine, of which Tikka includes only one. Its magazine housing is part of the action rather than the stock, which permits the T1x to utilize the many aftermarket stocks designed for the center-fire T3x series. The front-facing magazine release, also part of the action, could be prone to accidental bumping, though we never experienced an issue with it during testing.

The adjustable, single-stage trigger measured, on average, a crisp 3 lbs., 8 ozs., from the factory using a Timney trigger gauge. Adjustment occurs with a single set screw at the front of the housing, and while we were able to adjust it down as far as 1 lb., 3 ozs., Tikka suggests going no lower than 2 lbs. Since this is the same trigger as used by the T3x series, all of the same aftermarket options work here as well, however, the bolt, bolt knob and shroud are unique to the T1x. Operating the bolt requires a scant 45 degrees of throw and then 1.5″ of travel in order to cycle.

The T1x receiver has a pre-tapped 11 mm dovetail along its top surface. For testing, we utilized an Area 419 scope base with 30 m.o.a. of built-in elevation. Our selected optic was a Vortex Strike Eagle 5-25X 56 mm mounted with 34 mm Vortex Precision Matched Rings. We tested the rifle’s accuracy at 50 yds. using three different types of ammunition—CCI’s Mini Mag Segmented HP, Eley’s Target and Lapua’s Center-X. Each was fired for 10 rounds over a chronograph to obtain velocity numbers, and then shot for accuracy using five, 10-shot groups each.

Our test gun proved to be outstandingly accurate. The Lapua load produced the best overall groups of the session, with an average center-to-center group size of 0.54″, but all three ammunitions grouped very well. We experienced zero malfunctions of any kind throughout approximately 300 rounds fired during zeroing, velocity testing, function testing and accuracy testing. Something to note is that lifting the bolt knob to cock the rifle has more resistance than expected for a .22 Long Rifle, and this is due to the steep cocking angle required for the 45-degree throw. After growing accustomed to it, this slight stiffness did not hinder us from quickly cycling the rifle. 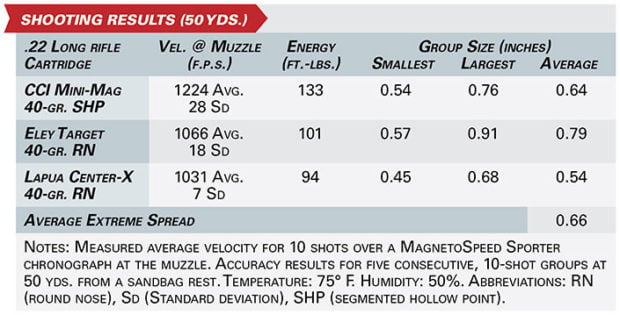 In all, the Tikka T1x rifle is an excellent entry into the rapidly growing precision rimfire market. We think it will perform well at a variety of tasks right out of the box, from plinking to varmint hunting to competition.