Georgia’s Republican state Senate passed an election bill late Monday that would restrict absentee voting and implement other expansive changes to its elections.

The bill passed 29-20 after its introduction last week and now returns to the state House, where it is expected to pass before heading to Gov. Brian Kemp’s desk. Its passage follows record turnout across the state, resulting in President Joe Biden’s narrow victory and Democrats flipping both of the state’s Senate seats in the Jan. 5 runoff.

To vote absentee under the new bill, Georgians would either need to be at 65 or older, away from their home precinct, or observing a religious holiday. Residents could also get an absentee ballot if they are working in an essential role “the entire time polls are open” or if they are overseas or in the military.

It also enforces strict voter ID measures, with identification required to both obtain an absentee ballot and return it.

If signed, the bill would reverse Georgia’s no-excuse absentee voting policies, which were adopted in 2005 with widespread GOP support. 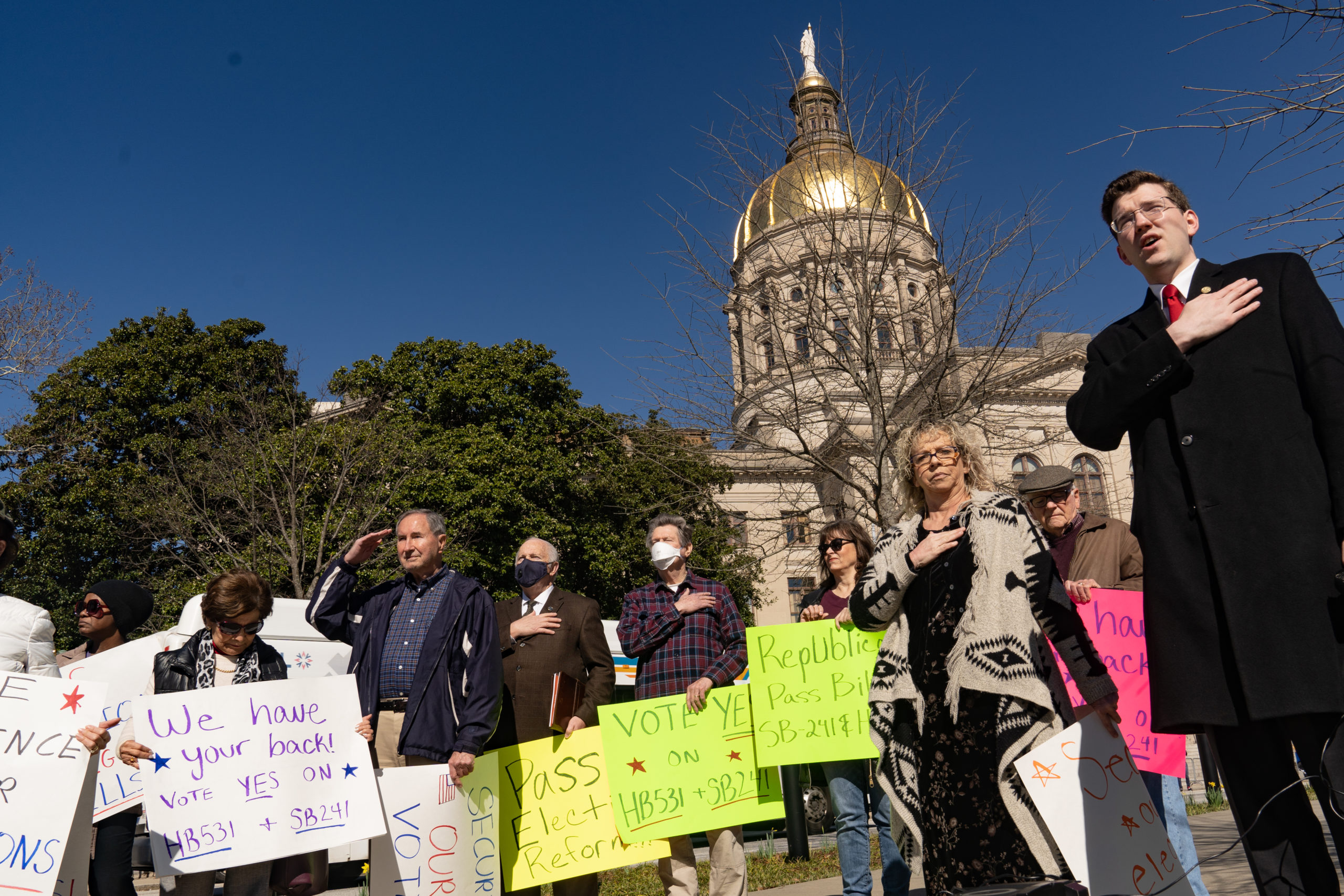 Republicans have said that the bill was aimed at restoring voter confidence in elections, following the 2020 election that was met with constant, baseless allegations of widespread fraud. (RELATED: RNC To Create Election Integrity Committee)

“I want every legal vote counted, timely and accurately, and I want better access for all voters,” Georgia Senate President Butch Miller told CNN. “Even those of us who never claimed that the election was stolen recognize that the electorate has lost confidence in the legitimacy of the system. We must work to restore that.”

The bill would also limit the use of mobile voting locations, require court approval to extend polling hours and grant the state legislature power to block emergency voting changes.

Democrats have claimed that the law is plainly unconstitutional, and have vowed to contest it if enacted.

“This blatantly unconstitutional legislation will not go unchallenged,” Lauren Groh-Wargo, the CEO of the voting rights group Fair Fight Action, said Monday. “It’s time for leaders across Georgia to step up and oppose this dangerous bill before it goes any further. We will continue to fight in Georgia, in the courts, and in Congress to make sure that Georgians’ voting rights are not infringed.” 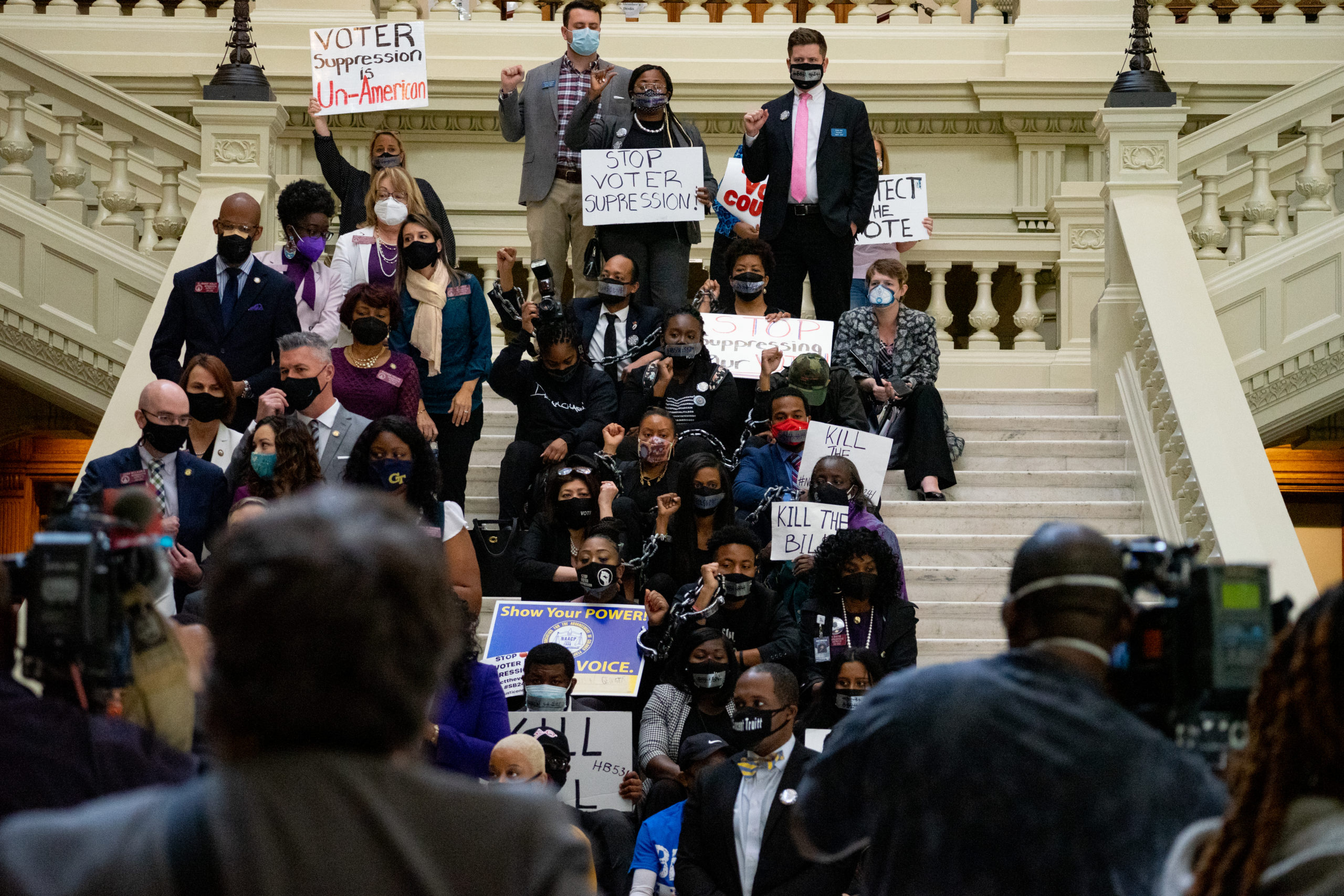 Demonstrators hold a sit-in inside of Georgia’s state Capitol building in opposition of a Republican bill that would restrict early voting hours, remove drop boxes, and require the use of a government ID when voting by mail. (Megan Varner/Getty Images)

The bill is one of many that would overhaul states’ election laws that have been introduced across the country. Iowa Republican Gov. Kim Reynolds signed a law Monday that required voters to request an absentee ballot application instead of automatically receiving one from the state, shortened early voting from 29 to 20 days and closed polls 8 p.m. instead of 9 p.m. on Election Day.

In Arizona, a bill introduced by Republican state Rep. Shawnna Bolick would give the legislature the power to put aside the will of voters and overturn the state’s election results, even if they have been certified by the governor and counted by Congress.

In Congress, Democrats passed H.R. 1, a sweeping election bill meant to combat voting restrictions and increase voting access. If passed, it would outlaw partisan gerrymandering and adopt multiple ethics reforms, but would also completely federalize the electoral process, legalize controversial measures like ballot harvesting and lower the voting age to 16.