China’s President Xi Jinping told the Chinese military on Tuesday it must be “prepared to respond” to various security situations amidst growing instability and uncertainty, the South China Morning Post reported.

“The current security situation of our country is largely unstable and uncertain,” Xi said, according to the report. “The entire military must coordinate the relationship between capacity building and combat readiness, be prepared to to respond to a variety of complex and difficult situations at any time, resolutely safeguard national sovereignty, security and development interests, and provide strong support for the comprehensive construction of a modern socialist state.”

Xi reportedly also called for “high-level strategic deterrence and a joint combat system” along with more technological innovation within the military.

“We are facing mounting tasks in national defense … and we must comprehensively improve military training and preparedness for battle so as to increase our strategic capabilities to prevail over our strong enemies.” (RELATED: Chinese Military Takes Control Of War Powers With New Legislation)

China and the U.S. have had an increase in tension, with China’s Foreign Minister Wang Yi saying on Sunday the U.S. needs to stop “crossing lines and playing with fire” in regards to Taiwan, according to Bloomberg. Wang also said there was “no room for compromise or concessions” when it comes to Beijing’s claim on Taiwan, according to the report. Wang reportedly alleged the U.S. was interfering with Beijing’s internal affairs under the guise of “democracy and human rights.”

“It is important that the United States recognizes this as soon as possible,” Wang said in reference to the United States’ alleged unwarranted interference. “Otherwise, the world will remain far from tranquil.” 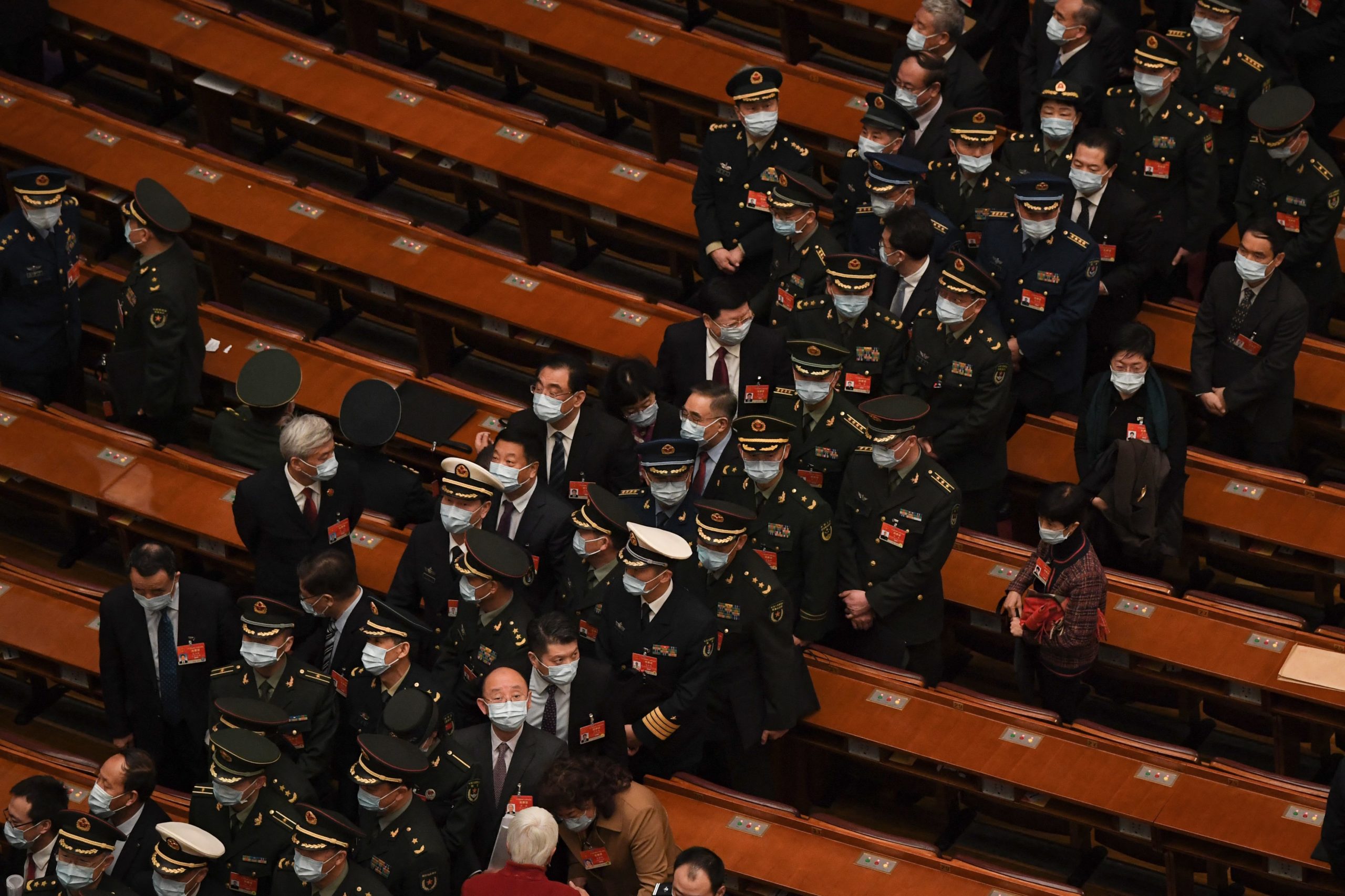 Military delegates leave after the second plenary session of the National Peoples Congress (NPC) at the Great Hall of the People in Beijing on March 8, 2021. (NOEL CELIS/AFP via Getty Images)

While the U.S. and Taiwan have no official ties, Trump sent Cabinet officials to visit Taiwan as a show of support, according to the AP.

The U.S. also cut a 10-year, $62 billion weapons deal with Taiwan in August. The Trump Administration also announced it would be selling advanced military equipment to Taiwan, angering Beijing officials.

The State Department clarified on Sunday that the U.S. still supports Taiwan.

“We urge Beijing to cease its military, diplomatic, and economic pressure against Taiwan and instead engage in meaningful dialogue with Taiwan’s democratically elected representatives,” the department said, according to the AP.

U.S. warship fleets have also sailed near Taiwan in recent weeks and through disputed South China Sea territory, according to Reuters.

There is also an ongoing dispute along the Chinese-Indian border, with a deadly clash occurring in June that left 20 Indian soldiers dead along with an undetermined number of Chinese soldiers dead, according to The Wall Street Journal (WSJ).

China announced last year they were boosting their defense budget by 6.6%, according to Reuters.

China has been warning their military to prepare for war, with Xi telling the military to “put all (their) minds and energy on preparing for war,” in October, according to CNN.