University of Virginia (UVA) staff helped advise other universities on how to illegally avoid returning excess grant funding to the federal government and discussed the potential consequences if the public became aware of the scheme, according to an investigative report from the Department of Education that was obtained by the Daily Caller.

UVA agreed to pay $1 million to settle claims that it did not properly account for discounts it received on equipment and material it purchased with federal grant money and failed to return the excess funds, the Justice Department announced in June 2020. 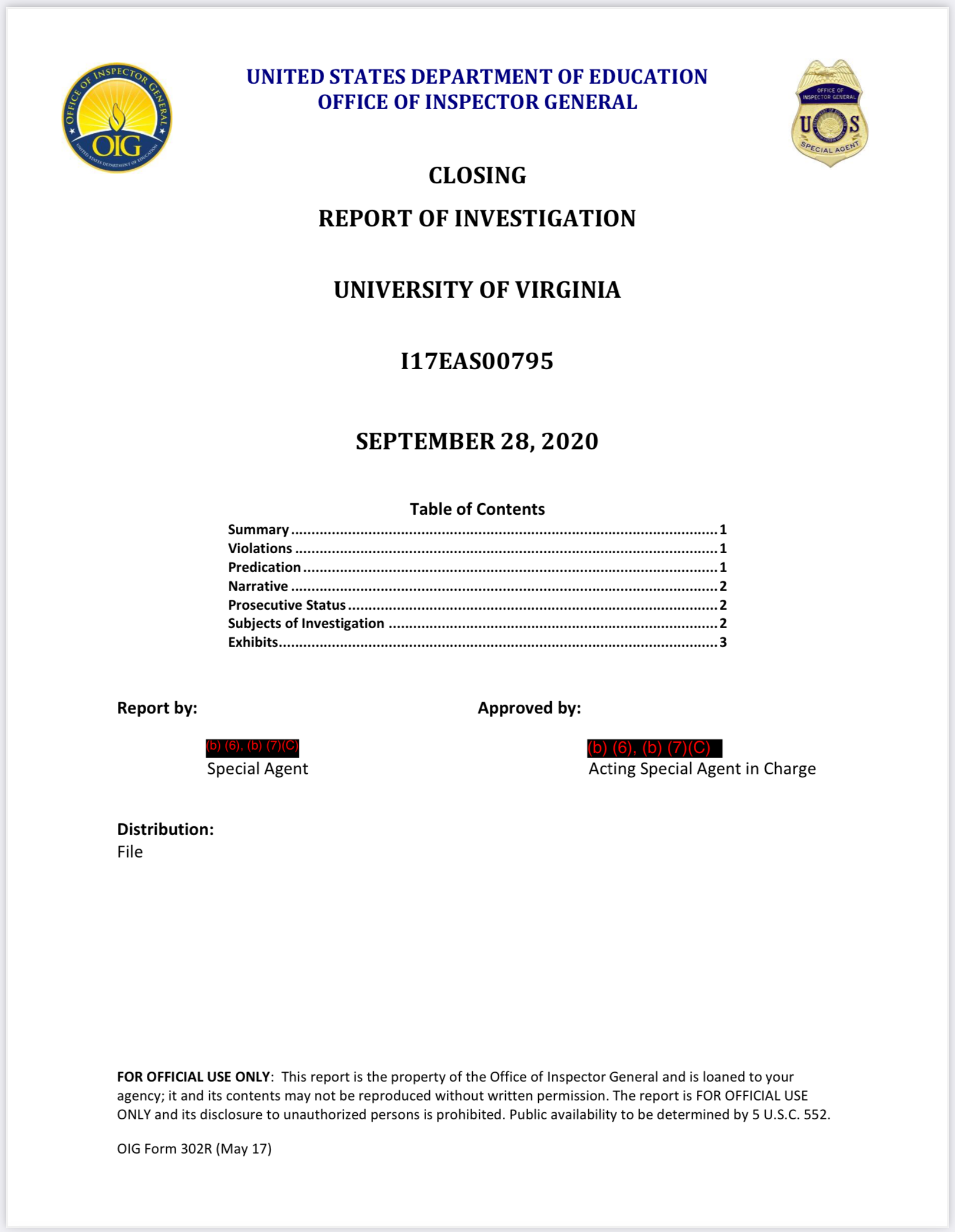 Department of Education FOIA of University of Virginia Investigation

A Freedom of Information Act (FOIA) request to the Department of Education revealed that federal officials also allegedly uncovered internal communications between UVA executives discussing “in plain terms the illegality of their actions” and the ramifications if the scheme became “front page news.” 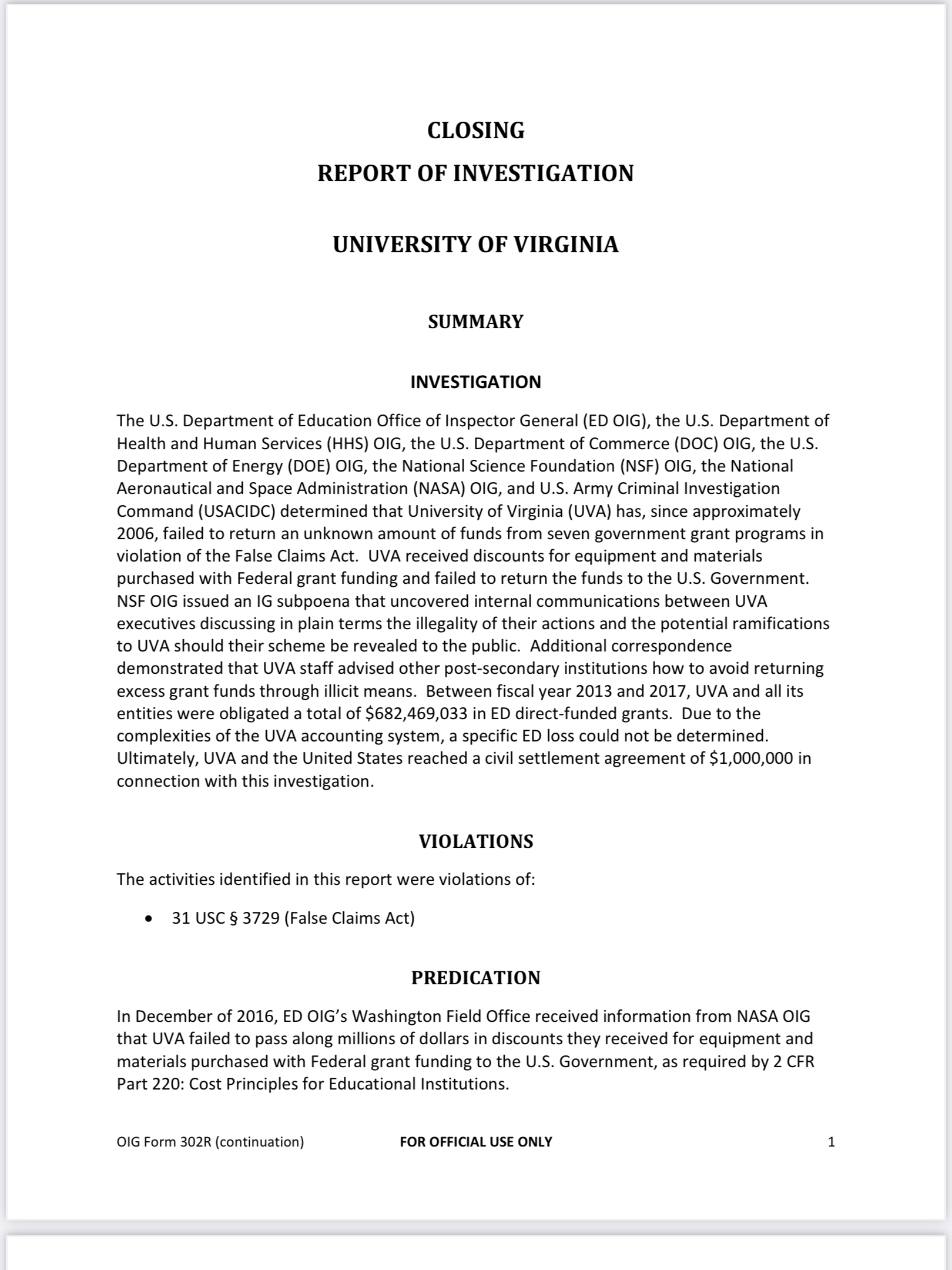 Department of Education FOIA of University of Virginia Investigation 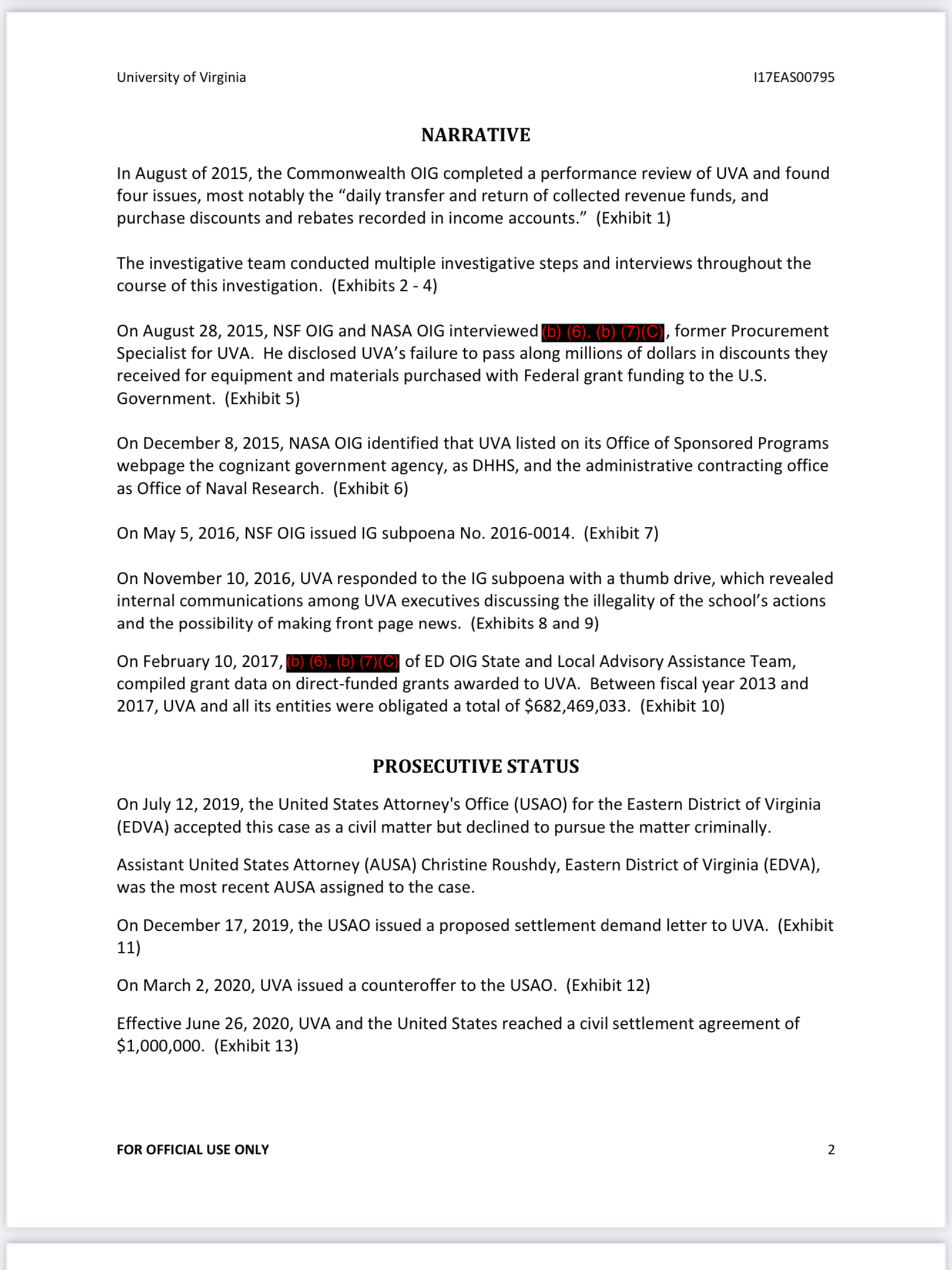 The investigation revealed that UVA staff had also “advised other post-secondary institutions” on how to avoid returning excess grant funds so the colleges could instead keep the money, a violation of the False Claims Act, according to the report.

In August 2015, officials interviewed UVA’s procurement specialist, who disclosed the failure to pass along millions of dollars in discounts UVA received for materials purchased with the federal funding to the government.

The report said UVA was obligated to a total of $682,469,033 in direct-funded grants between fiscal year 2013 and 2017, but investigators could not determine an exact loss in federal funds due to the university’s complex accounting system.

The Caller asked UVA whether any of the staff involved in the scheme that were mentioned in the Department of Education’s report were disciplined.

“The University is pleased to have resolved this matter with the federal government,” a UVA spokesperson responded. “The University takes seriously its responsibility to be a good steward of federal funds and addressed areas of potential disagreement regarding accounting for rebates and credits for the time period between 2009-2017. The University has fully cooperated with the investigation and implemented new policy changes to our accounting practices.”

Numerous universities have been the subjects of cases involving False Claims Act violations. In 2015, the University of Florida paid $19.8 million to settle allegations that it had improperly charged the government for hundreds of federal grants while also inflating costs for services performed at a third party entity.

The University of Missouri, Columbia paid a $2.2 million penalty in 2016 after the government determined the university billed it for medical services performed by physicians when the services did not occur. Columbia University paid a $9.75 million settlement in 2016 after allegedly inflating charges to the government for 423 grants by applying its high “on-campus” cost rate instead of a much lower “off-campus” cost rate for research services.