American companies with substantial business interests in China have largely remained silent since the Trump administration in late January condemned the Chinese Communist Party’s treatment of Uyghur Muslims as “genocide,” a position that was later reaffirmed by the new Biden administration.

The Daily Caller reached out to several companies with business ties to China multiple times in the weeks following and only received responses from Nike, Caterpillar, and Cummins.

Days before former President Donald Trump left office, then Secretary of State Mike Pompeo issued a seething condemnation of the Chinese government and its treatment of the Uyghur population spanning almost seven years.

“I have determined that the PRC [People’s Republic of China], under the direction and control of the CCP [Chinese Communist party], has committed genocide against the predominantly Muslim Uyghurs and other ethnic and religious minority groups in Xinjiang,” Pompeo said in a statement. “I believe this genocide is ongoing, and that we are witnessing the systematic attempt to destroy Uyghurs by the Chinese party-state.” 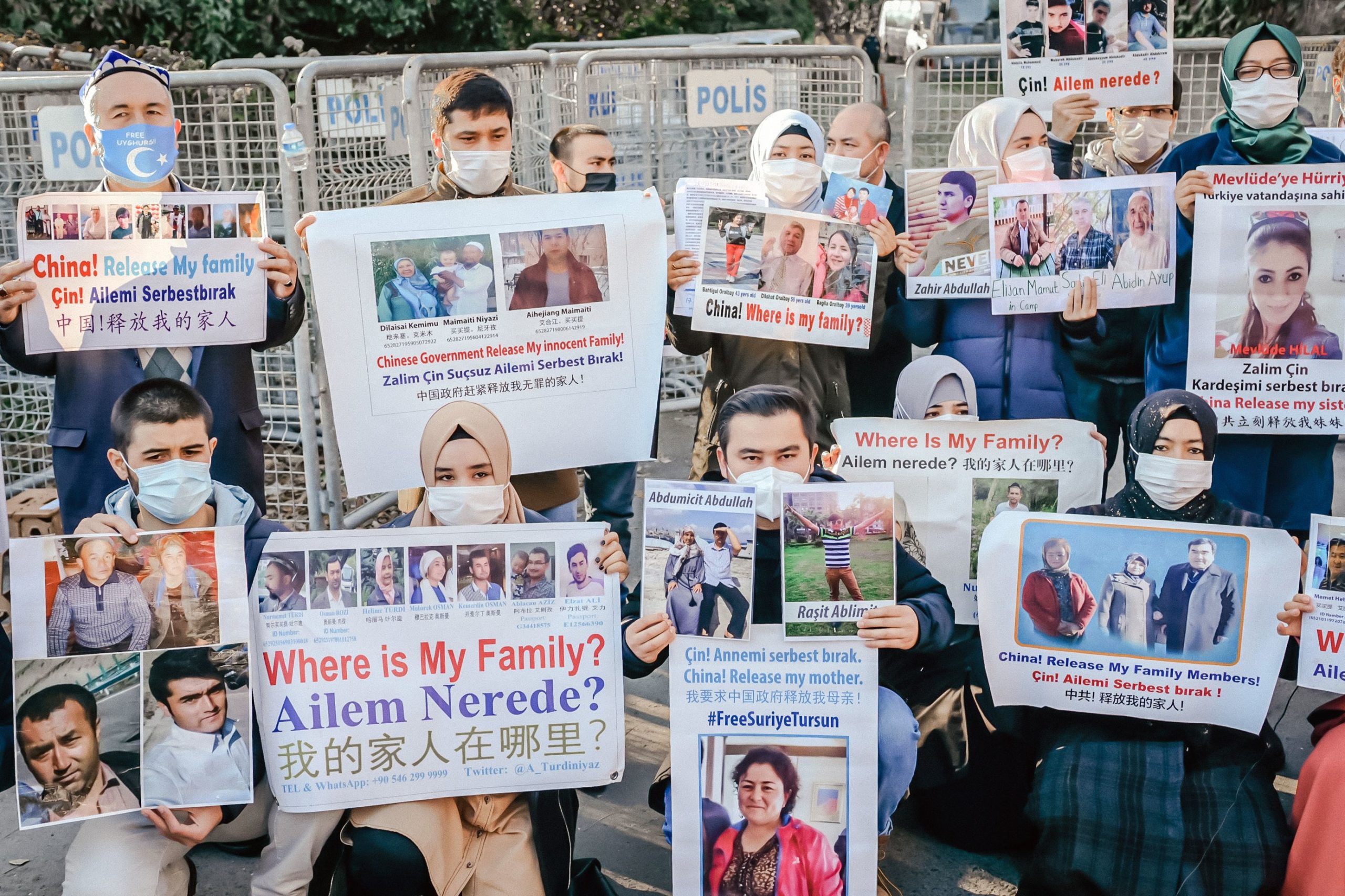 Members of the Muslim Uighur minority hold placards as they demonstrate in front of the Chinese consulate on December 30, 2020, in Istanbul, to ask for news of their relatives and to express their concern after China announced the ratification of an extradition treaty with Turkey. (Photo by BULENT KILIC / AFP) (Photo by BULENT KILIC/AFP via Getty Images)

Dating back to 2014, China has created specific legislation targeting Uyghurs in the Xinjiang province under the facade of “counterterrorism.” According to the Human Rights Watch, China’s “Strike Hard Campaign Against Violent Terrorism” has resulted in a significant increase in arrests as well as the subjugation of a reported one million Uyghurs to government-organized detention camps, prisons, and education camps. (RELATED: The Netherlands Declares China’s Treatment Of Uighurs A Genocide)

As a result, those detained have suffered tremendous abuses and clear human rights violations. According to accounts obtained by the BBC, details have emerged about “an oppressive system of mass surveillance, detention, indoctrination, and even forced sterilization.”

Under the new Biden administration, Secretary of State Antony Blinken reaffirmed the U.S.’ stance on the CCP’s actions.

“That would be my judgment as well … Forcing men, women, and children into concentration camps, trying to in effect reeducate them to be adherents to the Chinese Communist Party – all of that speaks to an effort to commit genocide,” Blinken said in a statement to the Senate Foreign Relations Committee.

Corporate America has reaped significant rewards from doing business in China, even over the course of this past year in the midst of a global pandemic. Nearly 80% of Walmart’s merchandise is imported from China, and Goldman Sachs’ recent business venture announced in December has been heralded as a “significant commitment to and investment in China,” in a company memo.

While some companies, such as H&M, have stopped business dealings in the province since details of targeted abuse towards Uyghurs emerged in September, others have continued to invest huge amounts of money into their China dealings at the expense of maintaining any sense of moral obligation.

Disney, after previously coming under fire for filming “Mulan” in Xinjiang, continues to run its theme park resort in Shanghai, in which they’ve invested an estimated $5.5 billion, according to a 2016 report from International Director. The park continues to operate as a revenue source for Disney and has updated COVID-19 restrictions.

Since the Biden administration’s comments on genocide, Nike has publicly remained silent and continues to do business and manufacturing in China, but pointed the Daily Caller to a statement from 2020 condemning forced labor in the country when asked for comment.

“The Nike Code of Conduct and Code of Leadership Standards have requirements prohibiting any type of prison, forced, bonded or indentured labor, including detailed provisions for freedom of movement and prohibitions on discrimination based on ethnic background or religion,” the statement said. “We continue to regularly engage with all of our suppliers to evaluate compliance with Nike’s Code of Conduct and Code Leadership Standards.”

In recent weeks, Mark Cuban, owner of the Dallas Mavericks, attempted to stop playing the national anthem before games. Although it has become common practice in the NBA to denounce racism in America, Cuban and other NBA leaders have bluntly refused to condemn the genocidal events in China. Speaking with Megyn Kelly in October, Cuban said, “They are a customer. They are a customer of ours. And guess what, Megyn? I’m okay with doing business with China.”

A report from NBC News delved deeper into the amount of money the NBA has poured into China, citing data from the Sports Business Journal. The 2018 season saw 800 million Chinese people watch at least one game and the league is worth an estimated $5 billion in the country alone.

Caterpillar, a construction company that has been involved with business in China for over 40 years, told the Daily Caller it is “committed to respecting internationally recognized human rights throughout our global operations.”

Caterpillar does not condone any form of forced labor. Our human rights policy statement is available online here. Caterpillar does not manufacture apparel. We carefully license our trademark to a limited number of companies that produce apparel. No Caterpillar licensee is approved to receive products from the Xinjiang region. Licensees are required to comply with Caterpillar’s sound business practices, follow the law and conduct activities in a manner that reflects Caterpillar’s Code of Conduct.

When asked about China being engaged in genocide, a representative from Cummins, which manufactures and distributes engines, told the Daily Caller, “We are committed to respecting the rights of all people. We also believe our presence in China has a positive impact and has led to improvements over time on a range of aspects including the rights of people as well as labor rights and environmental conditions. As the situation and government policy evolve, we will continue to monitor and take action as appropriate.”

Walmart, the NBA, Goldman Sachs, and Disney did not respond to the Caller’s requests for comment.

While companies such as Goldman Sachs and Disney participate in Black History Month, often pointing to a “race crisis” in America, they remain largely silent on the plight of ethnic Uyghurs in China since the term “genocide” has been confirmed by the Biden administration.