While the national conversation about “misinformation” overwhelmingly links conservatives with the material — and censors or de-platforms them as a result — a recent study has shown that “very liberal” Americans are themselves deeply misinformed when it comes to the critical issue of racially-motivated brutality in policing.

Skeptic Research Center studied 980 participants who had a range of political ideologies. Participants were first asked where they placed themselves on the political spectrum in reference to financial/economic orientation and social/cultural orientation.

Participants were then asked two questions:

Participants could answer anywhere in the range from “about 10” to “more than 10,000” for the first question and could choose a number anywhere between zero to 100 for the second question.

When it came to the second question, those who self-identified as being “liberal” or “very liberal” were “particularly inaccurate,” estimating the percentage of black people killed by police were 56% and 60% respectively, according to the report. Self-identifying conservatives estimated around 37.80% of victims were black.

BBC News’ “Reality Check Team” reported that 23.4% of victims of fatal police shootings in 2019 were black. The Washington Post estimates 24.9% of victims were black. The results of the study have been seen elsewhere, with a 2020 Prager University video showing that college kids believed “1,400 unarmed blacks” were killed by police each year.

Mapping Police Violence estimates that in 2020, black people made up 28% of those killed by police despite being only 13% of the population. 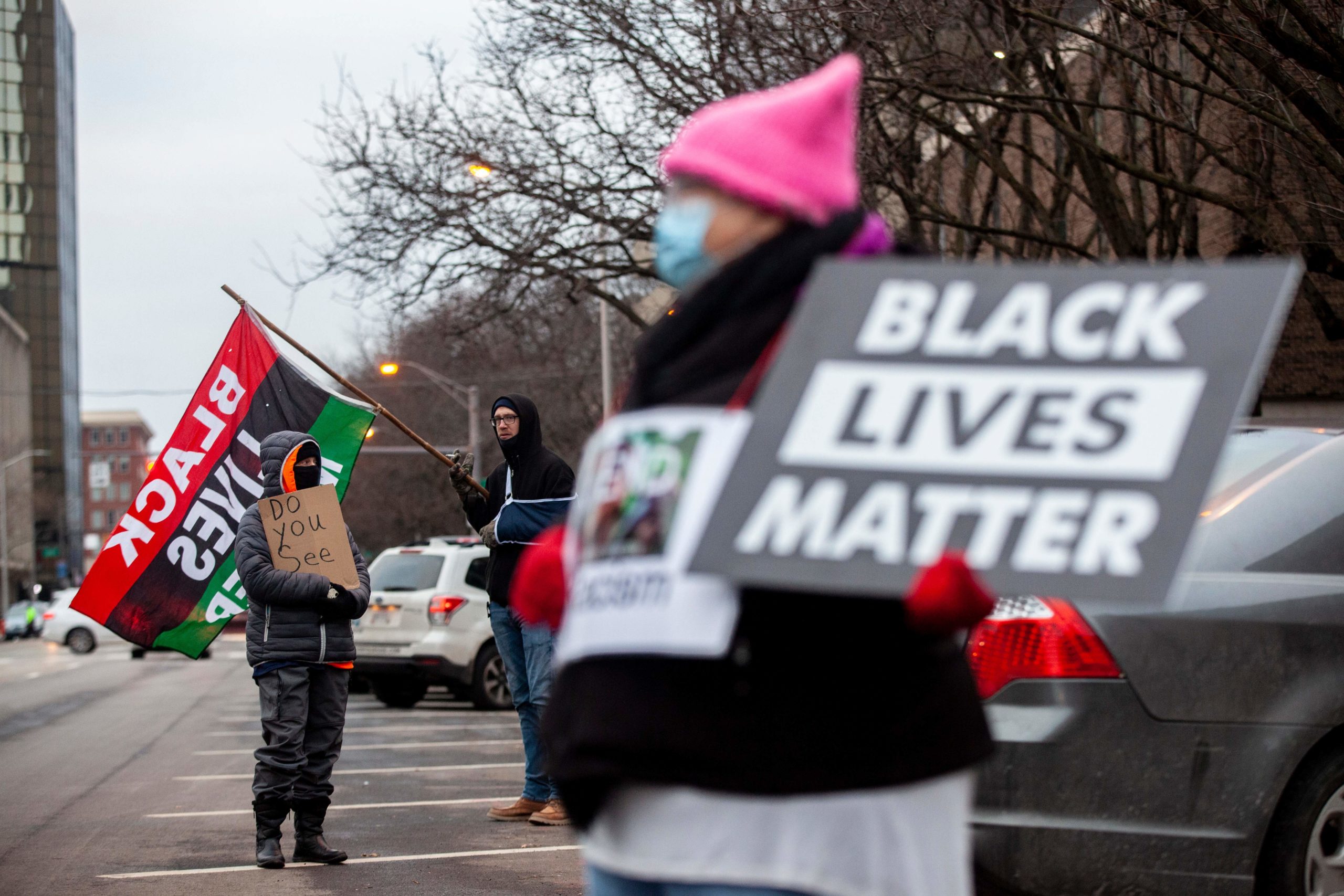 Protesters hold signs and flags during a demonstration against police brutality in front of the Fraternal Order of Police in Columbus, Ohio on Dec. 28, 2020. –  (STEPHEN ZENNER/AFP via Getty Images)

Public perception of police brutality has taken a drastic turn in light of George Floyd’s May 2020 death and the subsequent riots and protests. Calls to “Defund the Police” echoed through the nation all summer long, being quickly amplified by progressive policymakers.

Some cities went so far as to begin fully dismantling their police forces, including Minneapolis, where Floyd was killed. The city council passed a resolution in June that took funds from the police department and redirected the money toward a “community-based public safety model.” Approximately $7.7 million of the Minneapolis Police Department Budget was redirected to community violence prevention and mental health response teams.

“The City Council has stepped up to lead, working together to respond to complex demands from a community reeling from police violence, community violence and the social unrest that followed George Floyd’s death,” Council President Lisa Bender said, noting that the budget cuts would allow the city to take “concrete actions to transform community safety starting in 2021.”

Just months after the decision to slash the budget, however, the city grappled with a spike in carjackings, robberies and street racing. Several of the city council members who voted to defund the police even told police chief Medaria Arradondo that they were concerned over the recent spike in crime.

This unfortunate storyline aside, there were racial tensions at the protests themselves — in part because white liberals were overrepresented there. White people joined the Floyd protests en masse, with The New York Times (NYT) noting that “some of the white protesters identify as liberal.” (RELATED: New Study Undercuts The Argument That American Law Enforcement Is Systemically Racist)

In fact, the greater presence of white protesters made some black protesters feel uneasy, according to the NYT.

“I looked around and I was like: ‘I feel outnumbered. Is my life in danger?'” President of Black Lives Matter Brooklyn Anthony Beckford told the NYT.

A majority of white Democrats also said police officers were more likely to use deadly force against a black person than a white person, according to a poll conducted by the Associated Press-NORC Center for Public Affairs Research. The poll also found that 64% say police violence against the public is very or extremely serious, compared with 29% in July 2015.

The poll also found that Democrats were more likely in 2020 to say police use more force against black people than they did in 2015.