In a Friday press release, Noem clarified that she believes “boys should play boys’ sports, and girls should play girls’ sports” but warned that the bill’s “vague and overly broad language could have significant unintended consequences.”

I believe that boys should play boys’ sports, and girls should play girls’ sports. I’m returning House Bill 1217 with the following recommendations as to STYLE and FORM. (1/)

“For example, Section 2 of House Bill 1217 requires a student athlete to verify, each year, that the student ‘is not taking and has not taken, during the preceding twelve months, any performance enhancing drugs, including anabolic steroids,” Noem said. (RELATED: Kristi Noem Wavers On Bill Banning Biological Males From Women’s Sports)

“Presumably, this requirement was included to address a student taking these drugs as a part of a gender transition, but House Bill 1217 is not limited in this way,” she continued. “Rather, if a male student athlete failed to make the football team, and later learned that another student on the team was taking steroids without disclosing it, the student who didn’t make the team would be entitled to sue both the school and the steroid-using student for damages.”

Noem’s comments followed a Friday morning report from the Daily Caller News Foundation that the governor was wavering in her support for the legislation due to pressure from groups in South Dakota.

The South Dakota Republican said as recently as March 8 that she was “excited” to sign the bill, which was sent to her desk on March 10, but has since suggested that she may not sign it.

“Governor Noem is still weighing 106 pieces of legislation that have action due next Friday, and that is one of them,” Noem’s communications director Ian Fury told the DCNF Friday morning. 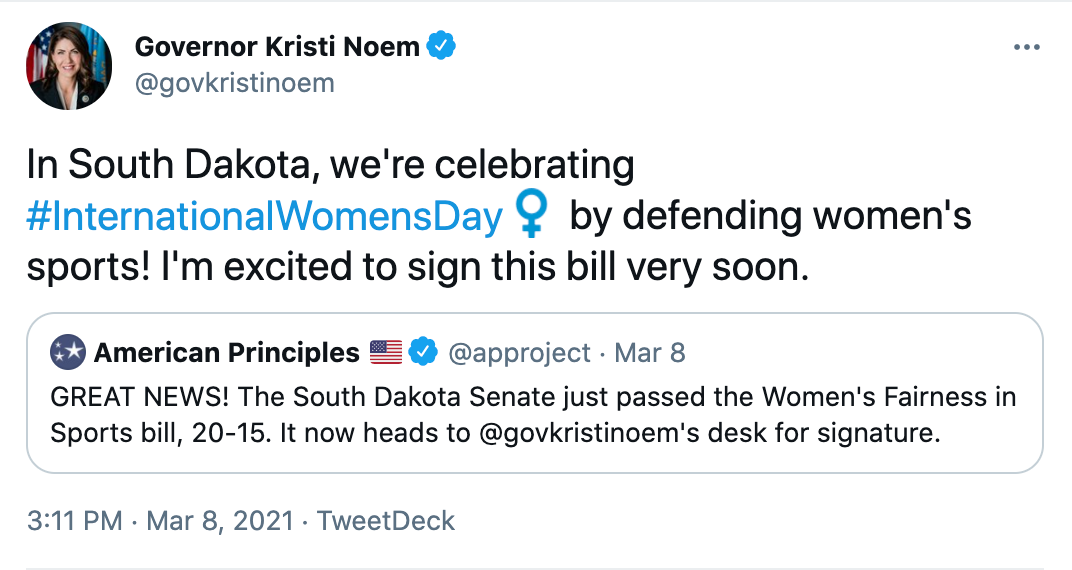 American Principles Project (APP) Director of Policy and Government Affairs Jon Schweppe told the DCNF that the governor faces pressure from the NCAA, the South Dakota Chamber of Commerce, and an Amazon plant in Sioux Falls, which is “quietly threatening” to leave over the bill, the APP leader told the DCNF.

Schweppe warned “she’s already kind of backtracking and preparing the stage for a veto.”

“I’m hoping she doesn’t do that because she will destroy her political career,” Schweppe told the DCNF. “She’s trying to become president or have a national profile.”

Noem also suggested that Section 2 of the bill “creates an unworkable administrative burden on schools, who under its terms must collect verification forms from every student athlete, every year, as to age, biological sex, and use of performance-enhancing drugs.”

“In South Dakota, we are proud of our universities’ athletic programs, and in particular the great strides we have taken to gain national exposure and increase opportunities for our next generation over the past two decades,” she continued.

“South Dakota has shown that our student athletes can compete with anyone in the country, but competing on the national stage means compliance with the national governing bodies that oversee collegiate athletics,” Noem said. “While I certainly do not always agree with the actions these sanctioning bodies take, I understand that collegiate athletics requires such a system – a fifty-state patchwork is not workable.”