Former President Donald Trump said in a statement Sunday that the Biden Administration must “immediately complete the wall” to stop the influx of illegal immigrants crossing the U.S.-Mexico border.

“They must immediately complete the wall, which can be done in a matter of weeks – they should never have stopped it,” the statement said. “They are causing death and human tragedy. In addition to the obvious, drugs are pouring into our country at record levels from the Southern Border, not to mention human and sex trafficking. This Administration’s reckless policies are enabling and encouraging crimes against humanity. Our Country is being destroyed!” 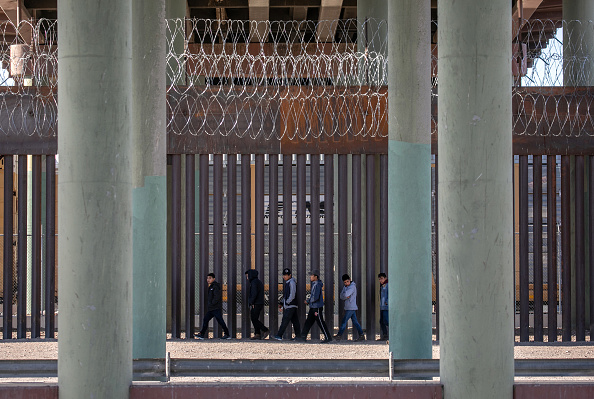 Illegal immigrants walk along the U.S.-Mexico border wall after running across the Rio Grande into El Paso on March 17, 2021 in Ciudad Juarez, Mexico. U.S. immigration officials are dealing with an immigrant surge (By John Moore/Getty)

Trump added that Department of Homeland Security (DHS) Secretary Alejandro Mayorkas’ appearance on a Sunday news show was a “national disgrace.” (RELATED: ‘How Can You Say The Border Is Closed’?: MSNBC’s Chuck Todd Presses Biden DHS Secretary On Migrant Crisis)

“His self-satisfied presentation – in the middle of the massive crisis he helped engineer – is yet more proof he is incapable of leading DHS,” the press release stated. “Even someone of Mayorkas’ limited abilities should understand that if you provide Catch-and-Release to the world’s illegal aliens then the whole world will come.”

Last month, U.S. Customs and Border Protection (CBP) encountered 100,441 people attempting entry along the southwest border, according to the agency.