An image shared on Facebook claims President Joe Biden in 1990 said, “Negroes should not be allowed to hold positions of power in Government.” 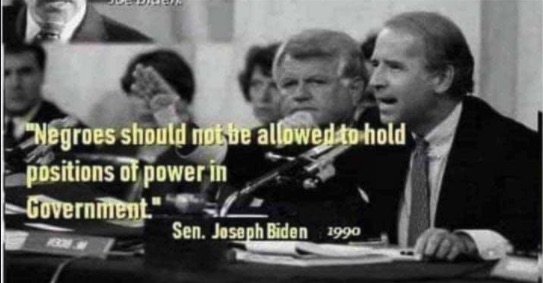 Check Your Fact didn’t find any record of Biden making the statement attributed to him in the Facebook post.

The image shows a black-and-white photo of Biden sitting next to the late Democratic Sen. Ted Kennedy. Text inside the image attributes to Biden a quote he allegedly said in 1990: “Negroes should not be allowed to hold positions of power in Government.”

While some social media users sharing the image seem to believe the alleged statement is real, it does not appear to actually be genuine. (RELATED: Did Joe Biden Say The N-Word During A Recent Speech?)

Check Your Fact didn’t find any news outlets quoting Biden as saying the statement in 1990 or any other year. The quote also does not appear in the congressional record or C-SPAN’s archive of footage and transcripts featuring Biden. Nor can it be found in Factba.se, a database of Biden’s public remarks.

It is possible the alleged quote is a distorted paraphrasing of a comment Biden made in the Senate in 1985 while questioning William Bradford Reynolds, a nominee for U.S. associate attorney general. At the time, Biden quoted a racist comment from a white Louisiana state lawmaker as part of a point in his argument against Reynolds’ fitness, according to the Associated Press.

“They brought to your attention the allegation that important legislators in defeating the Nunez plan, in the basement, said, ‘We already have a n—– mayor, we don’t need any more n—– big shots,’” Biden said, according to C-SPAN footage of the 1985 hearing.

The context of that comment makes it clear Biden was quoting a white Louisiana state legislator to make an argument against Reynolds’ nomination, not expressing his own beliefs. That quote has been taken out of context in the past, according to Reuters.