Amazon is confident that its nearly 6,000-person workforce at a new Bessemer, Alabama warehouse will reject a unionization bid as the historic vote comes to an end.

The online retail giant compensates and treats its workers well while the Retail, Wholesale and Department Store Union (RWDSU) — the labor union attempting to unionize the employees — has misrepresented the facts, Amazon spokesperson Heather Knox told the Daily Caller News Foundation. Amazon warehouse workers in Bessemer, Alabama are paid $15.30 per hour on average, receive health and dental insurance, are able to have their 401(k) plans matched and may receive college tuition reimbursement, Knox said.

“We work hard to support our teams and more than 90% of associates at our Bessemer site say they would recommend Amazon as a good place to work to their friends,” Knox said in a statement. “We don’t believe the RWDSU represents the majority of our employees’ views.”

“RWDSU membership has been declining for the last two decades, but that is not justification for its president Stuart Appelbaum to misrepresent the facts,” she said. (RELATED: Marco Rubio Endorses Amazon Workers Unionization, Tells Business Community To Stop Taking Republicans For Granted) 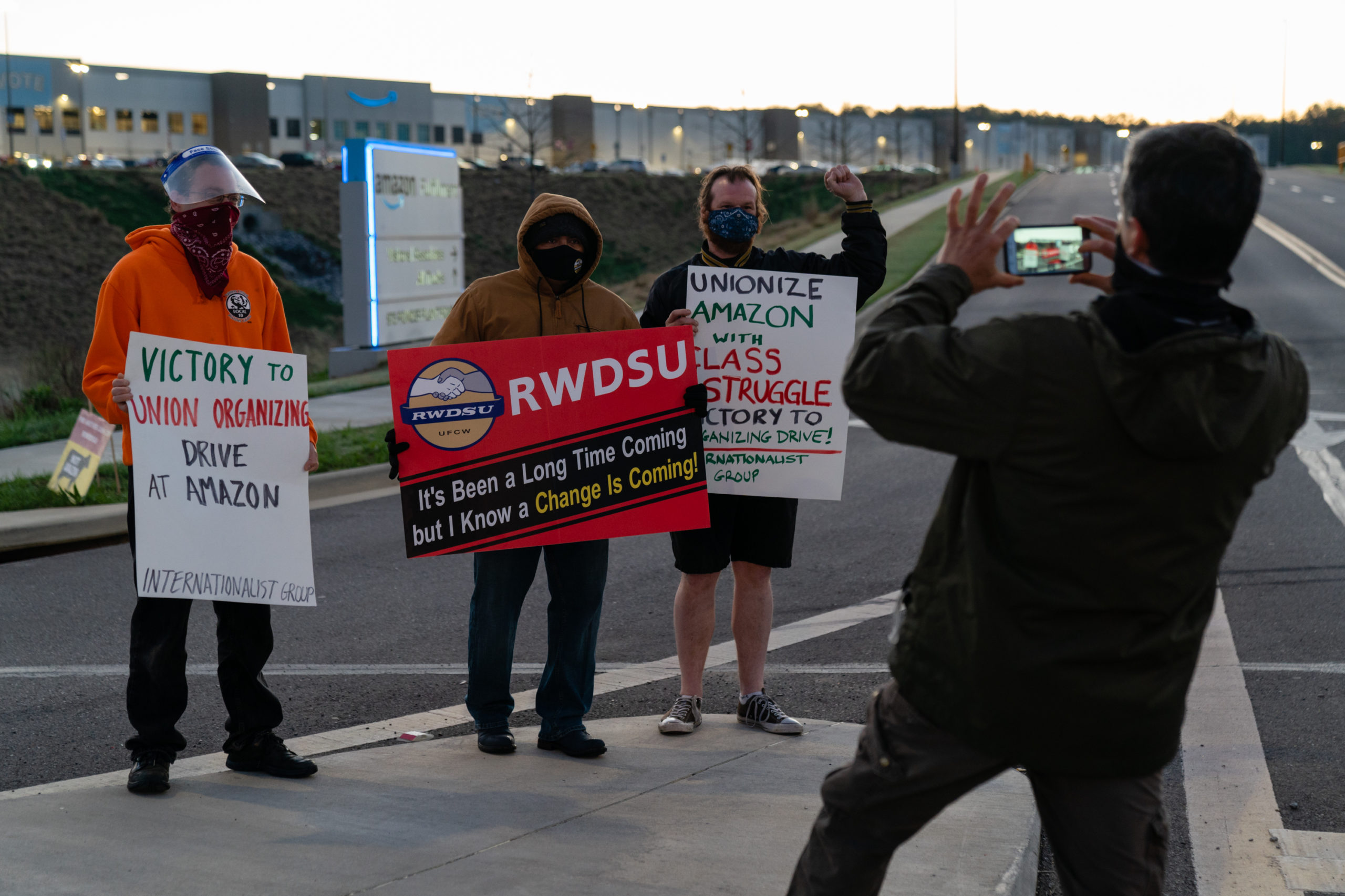 Supporters of the RWDSU unionization effort take a photo outside the Amazon fulfillment warehouse in Bessemer, Alabama on Monday. (Elijah Nouvelage/Getty Images)

The Bessemer Amazon workers first filed a notice of a vote to form a union in November. The workers would become the company’s first unionized workforce if a simple majority approves unionization in a vote that began on Feb. 8 and concluded Monday.

“Having a union at Amazon would give us the right to collectively bargain over our working conditions including items such as safety standards, training, breaks, pay, benefits, and other important issues that would make our workplace better,” RWDSU’s website devoted to the effort said. “Amazon sometimes addresses issues at work but it’s all temporary.”

But Amazon pushed back and noted the range of benefits available to its employees that aren’t available to competitors. Amazon characterized its work environment as safe, innovative and inclusive and touted opportunities for training, continuing education and long-term career growth.

“Our employees choose to work at Amazon because we offer some of the best jobs available everywhere we hire, and we encourage anyone to compare our total compensation package, health benefits, and workplace environment to any other company with similar jobs,” Knox told the DCNF.

Dawn Hoag, a 43-year-old Amazon warehouse worker opposed to unionization, echoed Amazon’s arguments, saying that she doesn’t need a union to stand up for her, The Associated Press reported. 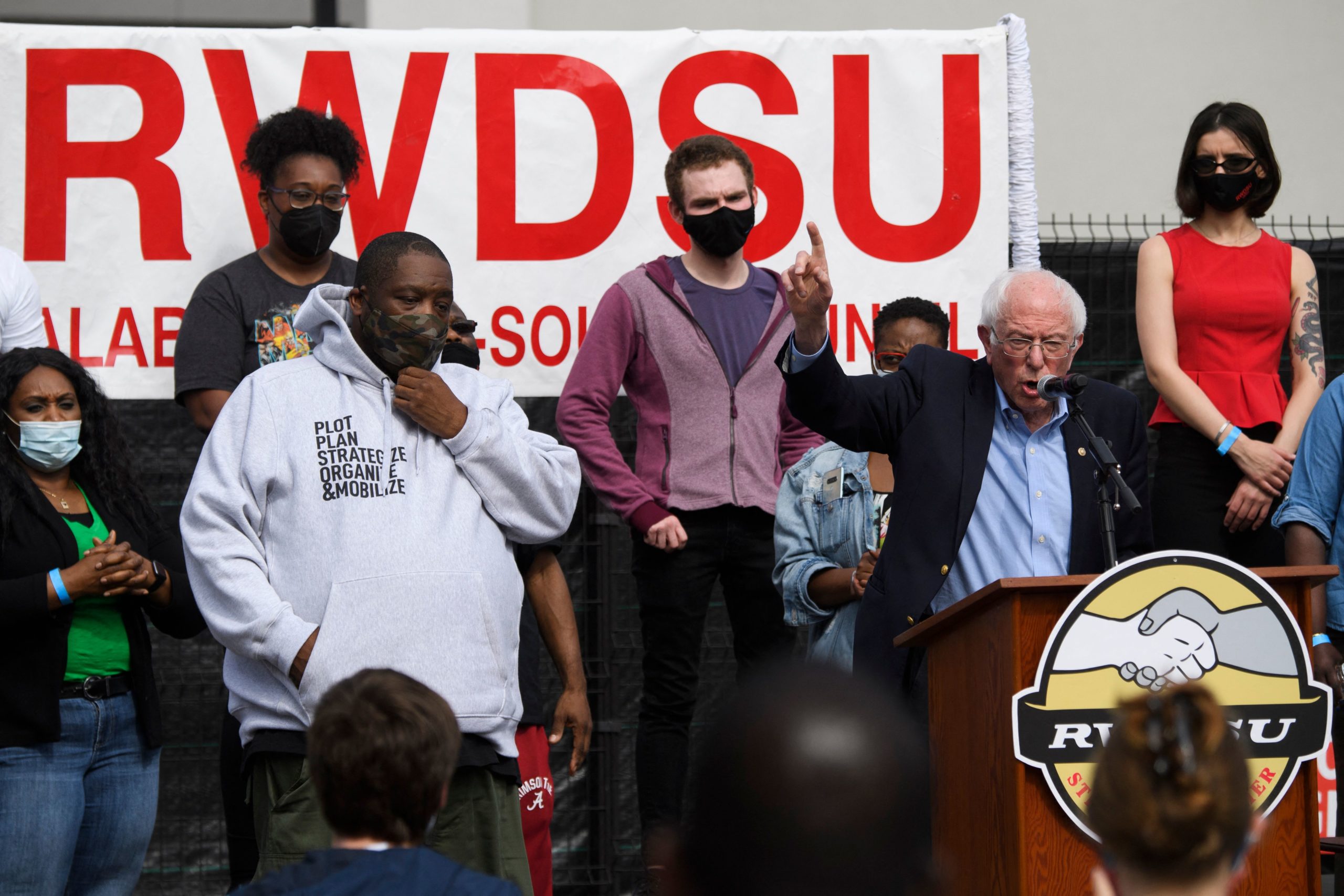 Critics have accused Amazon of improperly attempting to interfere in the union vote with tactics such as posting anti-union posters in the facility’s bathrooms. The company introduced an initiative to pay $1,000 to unhappy workers to quit, which critics said was an attempt to bribe pro-union workers to leave, The Washington Post reported.

Amazon defended its actions, saying it regularly posts fliers in bathrooms to ensure all 5,800 of its workers know about important information. Additionally, the company said its initiative to pay workers to quit, a program called “The Offer,” is nothing new and has been in place since 2014.

The company has also been criticized for hiring Russ Brown, a consultant who specializes in helping businesses prevent unions from entering their workplace. Amazon agreed to pay Brown $3,200 per day plus expenses, according to Department of Labor filings. (RELATED: Amazon Fights To Quash Unionization Effort As Thousands Of It Employees Nationwide Seek Union Info)

Amazon attacked Sens. Elizabeth Warren and Bernie Sanders, who both endorsed the RWDSU’s effort in Alabama, on Twitter last week after the pair slammed the company for its allegedly anti-union actions. Amazon tweeted that it follows through on promises to make its workplace more progressive while they fail to legislate progressive policies into law.

Brown declined to comment on the unionization drive in Alabama. The RWDSU didn’t respond to multiple requests for comment.

The warehouse workers had until the end of the day Monday to mail their ballots to the National Labor Relations Board (NLRB). The NLRB will begin counting votes Tuesday.