Dozens of America’s top media outlets parroted the conclusions of the World Health Organization’s (WHO) COVID-19 report despite warnings, even from the Biden administration, that the document was heavily-influenced by Chinese propaganda.

The WHO buried its dismissal of the much-debated lab leak theory at the very end of its lengthy COVID-19 report. Secretary of State Antony Blinken told CNN on Sunday that he was worried “about the methodology and the process” behind the report, noting “that the government of Beijing apparently helped to write it.”

Despite Blinken’s red flag, many media publications opted to take the report at face value. One day prior to the WHO document’s official release, the media widely obtained a draft copy of the report – and ran with it.

The publications amplified China’s preferred conclusions, flying in the face of concerted warnings from experts (in addition to Blinken’s comments on Sunday) against trusting the findings months ago. (RELATED: REPORT: China-Led WHO Investigation On Chinese Lab Expected To Say Exactly What China Wanted it To Say)

The Associated Press was the first to break the story, titling the news “WHO report: COVID likely 1st jumped into humans from animals.” While the wire service added in Blinken’s concerns and provided a bit of nuance in its writeup, it largely appeared to take the report as is.

The AP described the lab leak idea as “a speculative theory that was promoted by” Trump. It also noted that China “rejected” Blinken’s criticism and blamed “suspicion of China” for fueling “the theory.”

“The team proposed further research in every area except the lab leak hypothesis,” according to the AP. 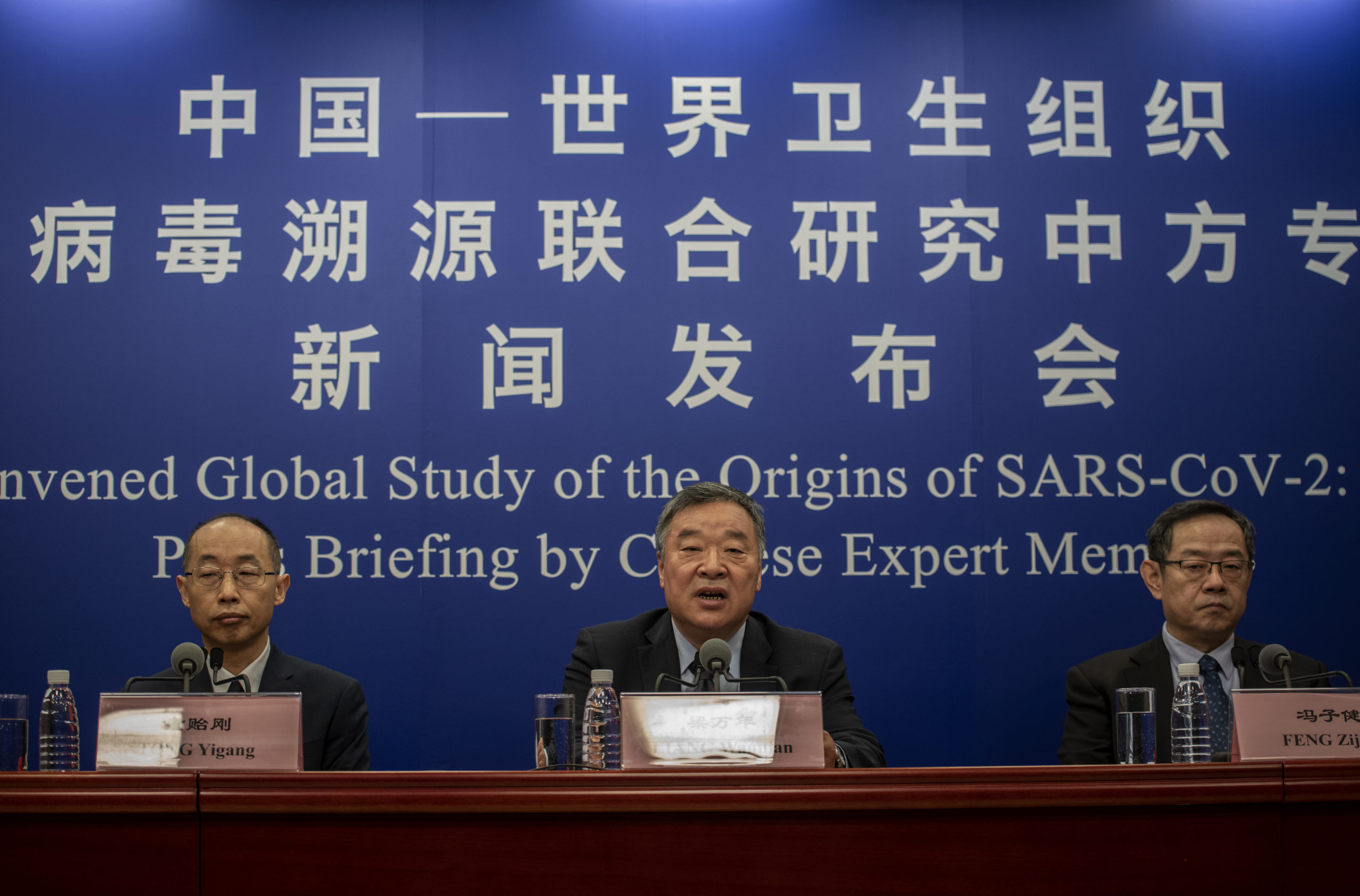 BEIJING, CHINA – MARCH 31: Head of the Expert Group on Covid Response at China’s National Health Commission Liang Wannian, center, answers a question as Tong Yigang, left, and Feng Zijian, right, listen during a press conference addressing the World Health Organization (WHO) report on the origins of SARS-CoV-2, at the National Health Committee on March 31, 2021 in Beijing, China. (Kevin Frayer/Getty Images)

This AP report spread like wildfire. ABC News, The Washington Post, Voice of America, U.S. News, the Boston Herald and countless other smaller publications syndicated the AP’s headline. ABC News’ syndication, in fact, even declared that “the findings were largely as expected.”

Monday’s Playbook PM newsletter linked out to the AP article as well, writing only that: “A joint WHO-China study on the origins of COVID-19 says that transmission of the virus from bats to humans through another animal is the most likely scenario and that a lab leak is ‘extremely unlikely,’ according to a draft copy obtained by The Associated Press.”

Following the AP’s report, a swarm of other news outlets began writing their own articles on the subject – these, too, lacked rigor and skepticism.

“WHO probe finds Covid lab leak ‘extremely unlikely’: An expert team assembled by WHO and China said that an animal most likely passed the virus to humans after catching it from a bat,” Playbook declared, linking to an article that provided little nuance into various concerns regarding the organization’s findings.

The Politico article linked in the newsletter simply declared that the report found the “lab leak of Covid” to be “extremely unlikely” and hardly pointed out any of the potential issues with regards to the report – scant for one sentence where it noted that “U.S. national security adviser Jake Sullivan previously raised concerns about a lack of transparency in the investigation.”

A Politico spokesperson pushed back on the idea that its article downplayed concerns regarding the report.

“The piece includes comments from Trump CDC chief Robert Redfield expressing the view that the virus escaped from a Wuhan lab, provides context about the current administration’s concern about a lack of transparency in the investigation, and accurately depicts the findings from the WHO report,” a spokesperson told the Caller in a statement.

NBC News also repeated the investigation’s findings at face value, reminding readers that the lab leak theory was “touted” by former President Donald Trump and citing certain scientists who agreed with the dismissal. This article referred to the lab leak theory as one that has “flourished among China skeptics even though it is based largely on circumstantial evidence.”

NBC News noted “political tensions” amid the WHO’s investigation and point out that “critics” believe “the inquiry was insufficient” due to some of the Chinese scientists’ affiliations and a lack of access to lab records.

“In other words, the scientists found no evidence that the virus was engineered or altered in a research facility,” NBC declared, referring to a scientist who believes the WHO’s dismissal of the lab leak theory is the right move. 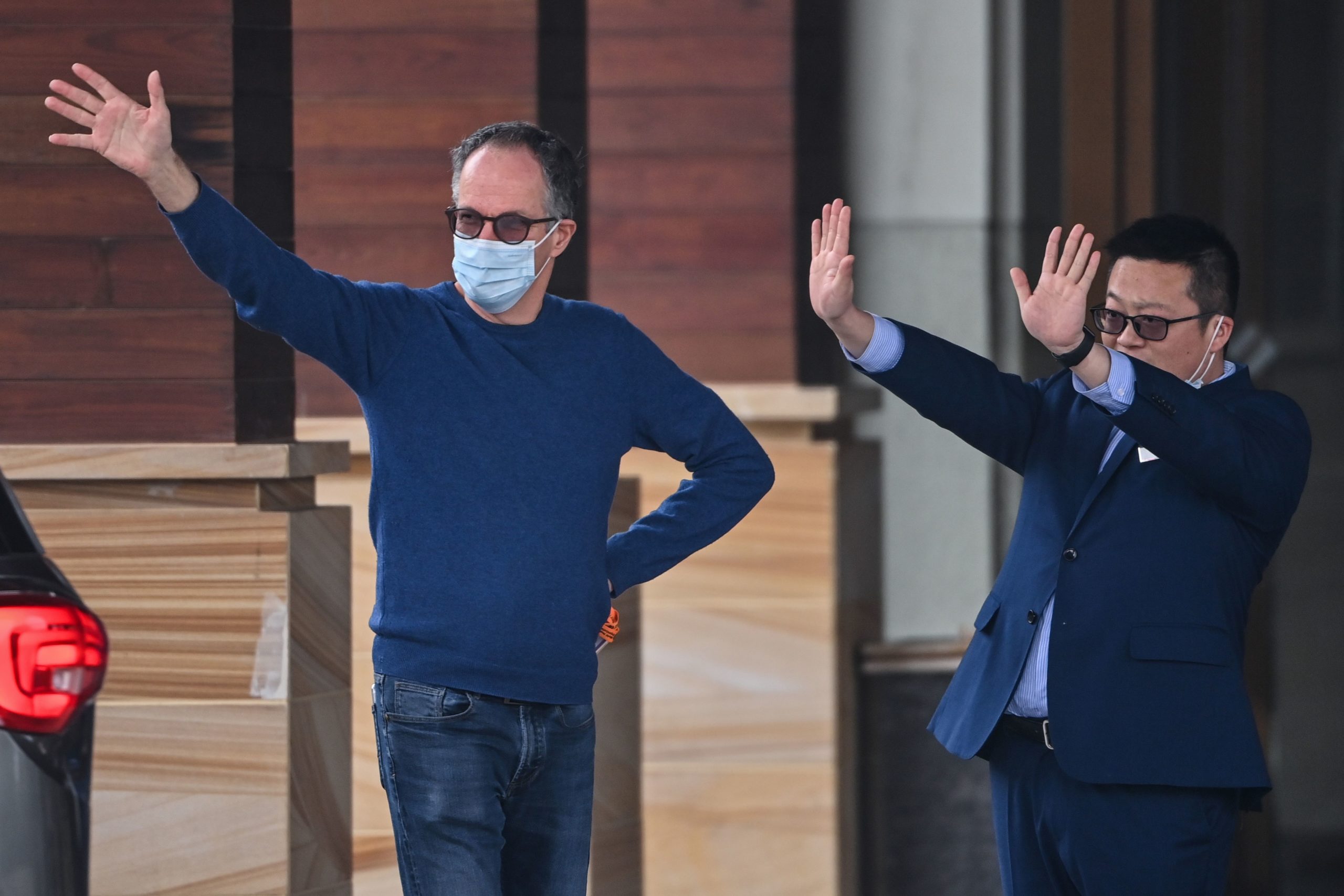 WHO team member Peter Ben Embarek (L) waves as group members Marion Koopmans and Peter Daszak leave their hotel after the World Health Organization (WHO) team wrapped up its investigation into the origins of the COVID-19 coronavirus in Wuhan in China’s central Hubei province on February 10, 2021. (HECTOR RETAMAL/AFP via Getty Images)

Other write-ups, such as one published Monday by Forbes, briefly noted the concerns regarding China’s transparency and attempts to “skew the findings.” Forbes dedicated a brief paragraph at the end of one if its write-ups to these concerns, but ultimately declared that there is “no evidence supporting” the lab leak theory.

The Forbes write-up did not mention a lengthy and comprehensive NY Mag report, published in January, diving into the possibility of the theory.

None of these reports highlighted that the WHO’s findings hardly addressed the theory that the virus may have escaped from a Wuhan lab. The articles also ignored or heavily downplayed the fact that the organization wasn’t able to conduct an independent investigation, as The Wall Street Journal noted.

After the report’s official Tuesday release, the U.S. joined 13 democracies in issuing a public statement condemning China’s influence into the WHO’s findings. The statement pointed out “shared concerns regarding the recent WHO-convened study in China.”

Ghebreyesus ultimately said the investigation was not “extensive enough” and noted that “further data and studies will be needed.” (RELATED: White House Slams ‘Incomplete’ WHO COVID-19 Report, Says China Is Not Cooperating)

Even with the U.S., Biden officials and the WHO’s director-general pointing out legitimate concerns regarding the report’s findings, much of the media opted to instead highlight the idea that the lab leak theory is not deserving of further research.

Though the media’s reports came prior to some of the most recent concerns, members of the press still chose to downplay past worries and failed to adequately update articles after the public was warned on Tuesday. These reports also coincided with members of the press dismissing the theory for months throughout 2020.