Amid a rise in attacks against Asian Americans, one big, bold, recurring claim stands out: The attacks, many say, are a product of white supremacy and are perpetuated by former President Donald Trump’s rhetoric on the “Wuhan Virus.”

This narrative is convenient precisely because it is not tangible – it cannot be proven, and therefore is difficult to definitively disprove. Despite a lack of compelling evidence, the media has run with the claim.

“If you can’t disprove something based on data, then you can perpetuate the narrative,” writer Ryan Girdusky pointed out. “The same liberals who’ve said that white supremacy is to blame for anti-Asian crime are also some of the same people who have said Asians are white-adjacent and benefit from white privilege.”

Vox, for one, published a lengthy article describing “how white supremacy tried to divide Black and Asian Americans.” The top line according to the Voxsplainers: white supremacy is at the root of “lingering Black-Asian tensions.” In other words, it does not matter whether the majority of individuals attacking Asian Americans are non-white—white supremacy, Vox argued, is the ghost in the machine animating literally all racial angst. (Note: Comprehensive data for recent attacks has not yet been compiled.)

Ultimately, there is a failure to remember what got America to this place of racial hierarchies and lingering Black-Asian tensions: white supremacy. White supremacy is what created segregation, policing, and scarcity of resources in low-income neighborhoods, as well as the creation of the ‘model minority’ myth — all of which has driven a wedge between Black and Asian communities. In fact, it is white Christian nationalism, more than any other ideology, that has shaped xenophobic and racist views around Covid-19, according to a recent study. And for Black and Asian American communities to move forward, it is important to remember the root cause and fight together against it.

CNN similarly published an evidence-free article arguing that “white supremacy” was “haunting Asian Americans.” The piece, labeled “analysis,” detailed “the white supremacist threat,” noting that a “flurry of current events—from the crisis on the southwestern border, to Republicans’ voter suppression efforts, to the disparities in Covid-19 vaccine availability—all revolve to some extent around questions of ethnicity.”

These articles and many others blaming white supremacy all have one thing in common: they neither highlight nor rely on any measurable data or evidence.

Unfortunately, there is no solid data compiling for recent crimes against Asian Americans. Stop AAPI Hate published a national report regarding incidents that occurred from March 19, 2020, to February 28, 2021, but this report did not include a roundup of suspects’ race or note alleged motives. Since the motive could be anything at this point, it seems the rest of the media filled in the blank.

Looking back at past data, however, puts a bit of a hole in the narrative that white Trump supporters and white supremacists have been pushing minority groups toward violence, Girdusky argued.

2018 data from the Justice Department shows that black people committed 27.5% of violent crimes against Asian Americans for that year. White and Asian attackers each made up for 24.1% of attacks against Asians.

“In 2019, Asians made up 6.2% of the population but just 1% of the perpetrators of violent crime. White people are 62% of the population but commit 50% of violent crimes,” Girdusky noted. “This bears note in light of the Left’s narrative that white Trump supporters are propelled toward violence against Asian Americans because of xenophobia, racism, and Trump’s usage of ‘China virus’ when speaking about the coronavirus. The narrative falls apart very quickly when observing the data.”

The narrative continues to fall apart when researching the race of those perpetuating more recent crimes against Asian Americans. With at least some of the attacks, the suspects are black and Hispanic, according to various news articles.

Many other articles have conveniently left out the race of the attackers.

For those playing at home, Vicha Ratanapakdee was killed by a black teen. https://t.co/18mLxXZMsj

Provisional data from 2020 hate crimes against Asians in New York City also throws a wrench into the now-common narrative. In 2020, 20 arrests for hate crimes were recorded against Asians, according to the data. Eleven of the offenders were black, two were black-Hispanic, five were white Hispanic and two were white.

“If you drill down on some recent incidents in the news in California, and get past the media gloss to the actual mugshots, you also find as many black as white offenders,” writer Andrew Sullivan noted in a recent Substack article.

Amid a rise in attacks against this community, a few incidents have stood out in particular, becoming the face of the push to slap the blame on white supremacy. First: The white man in Atlanta who shot up multiple massage parlors and stands accused of killing eight people.

Of the eight people shot dead, six were of Asian descent and two were white. A ninth person was also injured in the attack.

But the story is not as simple as liberal publications would like it to be. For one thing, the suspect, Robert Aaron Long, has said that the attacks were not racially motivated.

While Long could be lying, the investigation is still ongoing. To assume why an individual committed a crime and then amplify the assumption—that is akin to journalistic malpractice, Sullivan explained. What’s more? Typically, mass killers motivated by hate are open about their motives after committing the crime.

“What you see here is social justice ideology insisting, as [The New York Times executive editor] Dean Baquet temporarily explained, that intent doesn’t matter,” Sullivan wrote as he explained the media’s rush to assumptions. “What matters is impact. The individual killer is in some ways irrelevant. His intentions are not material. He is merely a vehicle for the structural oppressive forces critical theorists believe in. And this ‘story’ is what the media elites decided to concentrate on: the thing that, so far as we know, didn’t happen.”

“If the victims are white, they don’t really count,” he added, pointing out that various social justice warriors online immediately declared the attack as white supremacy while conveniently ignoring that two victims were white. “Everything in America is driven by white supremacist hate of some sort or other. You can jam any fact, any phenomenon, into this rubric in order to explain it.”

Within a week, another mass shooting occurred in a Boulder, Colorado, supermarket. This attack ended with 10 people dead.

Immediately, some prominent leftists assumed the shooter was white and began tweeting about the attack online. CJ Werleman, a Global Correspondent for the Byline Times, wrote that “the suspected gunman in the Boulder, Colorado mass shooting is a white guy” and lamented about what he believed were inevitable excuses with regards to a motive. 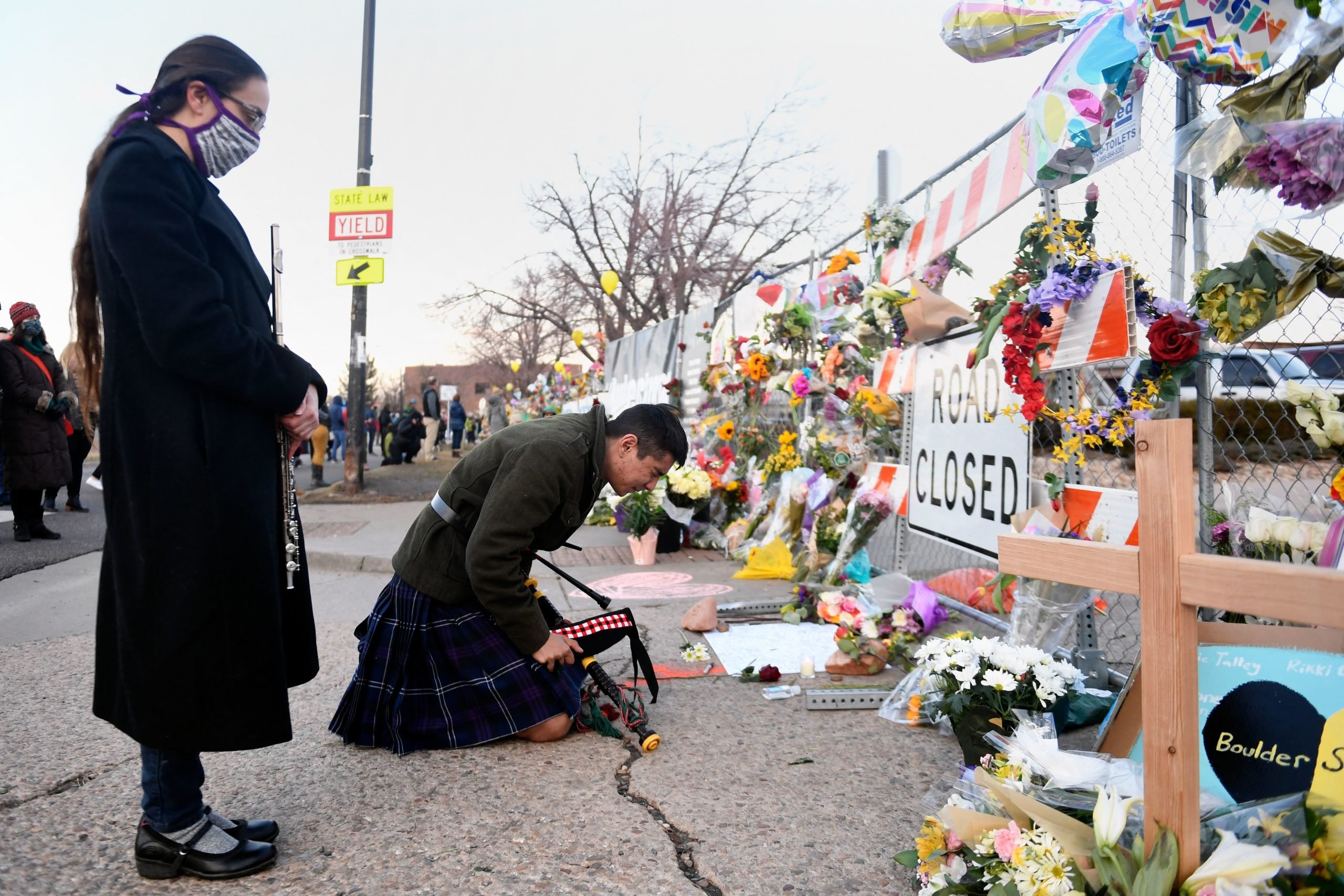 Geoffrey Nicosia (R) and Nikki Guillory reflect after playing music outside of a King Soopers grocery store in Boulder, Colorado on March 24, 2021, to honor the ten people killed during a mass shooting three days prior. (JASON CONNOLLY/AFP via Getty Images)

Just one day later, police released the man’s name: 21-year-old Ahmad Al Aliwi Alissa. His family, according to CNN, emigrated from Syria. Alissa is also a Muslim. Following the revelation, some individuals who had rushed to pin the attack on a white man issued corrections or deleted their tweets. However, others left them up or doubled down.

“Screenshots of what was believed to be Alissa’s Facebook page hint of fears that he was secretly being tracked on his phone and reflect his interest in Islamic teachings, immigration and martial arts. The screenshots and dozens of postings were captured by the online extremist tracking firm SITE Intelligence Group,” The Associated Press reported.

Between Long, Alissa and the many attacks against Asian Americans, it’s evident there’s no clear-cut motive that will fit neatly into every incident. Still, the media has jumped and consistently pushed the race narrative – even when it doesn’t fit the information available. (RELATED: Why Won’t The Media Say Who Keeps Attacking Asian People?)

Any available hard evidence, even anecdotal, cuts across the media’s theme. On the off chance that the perp’s race was reported, the white supremacy narrative barrels forward anyhow. 84-year-old Vicha Ratanapakdee, for example, was allegedly killed by a black teenager, according to video footage of the attack.

Activists used the attack to put together a “March Against White Nationalism” rally. And once again, not a peep from the media, because this inconvenient story flies against their convenient, albeit unfalsifiable narrative.