Austin’s visit will be the first time a top-level member of President Joe Biden’s administration has traveled to the Middle East. He is expected to discuss a number of issues, but chiefly the ongoing efforts to rekindle the Iran nuclear deal. Israel long opposed the Obama-era nuclear deal, and tensions between Israel and Iran have been growing more strained in recent weeks.

Biden held his first call with Netanyahu on Feb. 17, waiting longer than most presidents do to contact America’s greatest Middle Eastern ally. 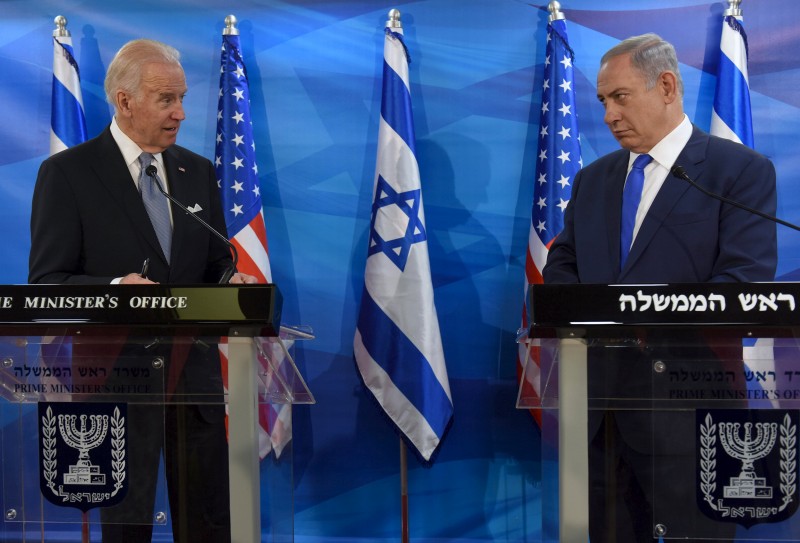 U.S. Vice President Joe Biden (L) and Israeli Prime Minister Benjamin Netanyahu look at each other as they deliver joint statements during their meeting in Jerusalem March 9, 2016. (REUTERS/Debbie Hill/Pool)

The Biden administration took the first step toward rejoining the Joint Comprehensive Plan of Action (JCPOA) on Friday, announcing a meeting on the issue with European, Russian and Chinese officials to be held Tuesday. White House Press Secretary Jen Psaki told reporters that the meeting was well underway Tuesday afternoon, but said they are likely to meet for several days. (RELATED: Iran Ends Nuclear Deal Commitment, Will No Longer Limit Uranium Enrichment)

Biden has sought for both the U.S. and Iran to return to the agreement after both countries formally withdrew under former President Donald Trump’s administration. He has said Iran must make the first move, however, and he is not willing to remove existing sanctions until Iran returns to compliance.

Secretary of State Tony Blinken said before his confirmation Iran could have enough fissile material to create a nuclear bomb in “a matter of weeks” if it and the U.S. do not rejoin the nuclear deal.

While there is a separate timeline for creating a working nuclear bomb once the fissile material has been obtained, Iran is much closer to obtaining the material than it was under the Iran Deal, Blinken told Andrea Mitchell on MSNBC. Blinken argued that Iran was at least a year away from obtaining sufficient fissile material under former President Barack Obama’s Iran deal.

“The time that it would take Iran – based on public reports, the time that it would take Iran to produce enough fissile material for a nuclear weapon is down to, we think, a few months,” he said at the time. “So that’s a real problem, and it’s a problem that could get more acute, because if Iran continues to lift some of these restraints imposed by the agreement, that could get down to a matter of weeks.”