Critics of Georgia’s new voting regulations question the seriousness of “line warming” tactics, but multiple state officials are already under investigation for illegally giving food and drinks to voters.

Gwinnett County Solicitor General Brian Whiteside has said in previous interviews that he does not believe that line warming, the inappropriate distribution of goods outside polling areas, is a serious issue in Georgia.

“There is no rational basis for the law,” he told MSNBC’s Ari Melber on April 6. “When you commit to a criminal law, there has to be a basis that there will be harm to a party or to property.”

However, multiple officials within the state are already in hot water over the practice, and many have admitted to distributing food outside polling areas. Groups have previously argued that the distribution of food allowed them to communicate and sway voters.

Georgia election officials received so many complaints about line-warming that Secretary of State Brad Raffensperger released a statement shortly before the state’s Jan. 5 Senate runoffs emphasizing that the state would “not tolerate efforts to electioneer near polling sites in violation of the law.” 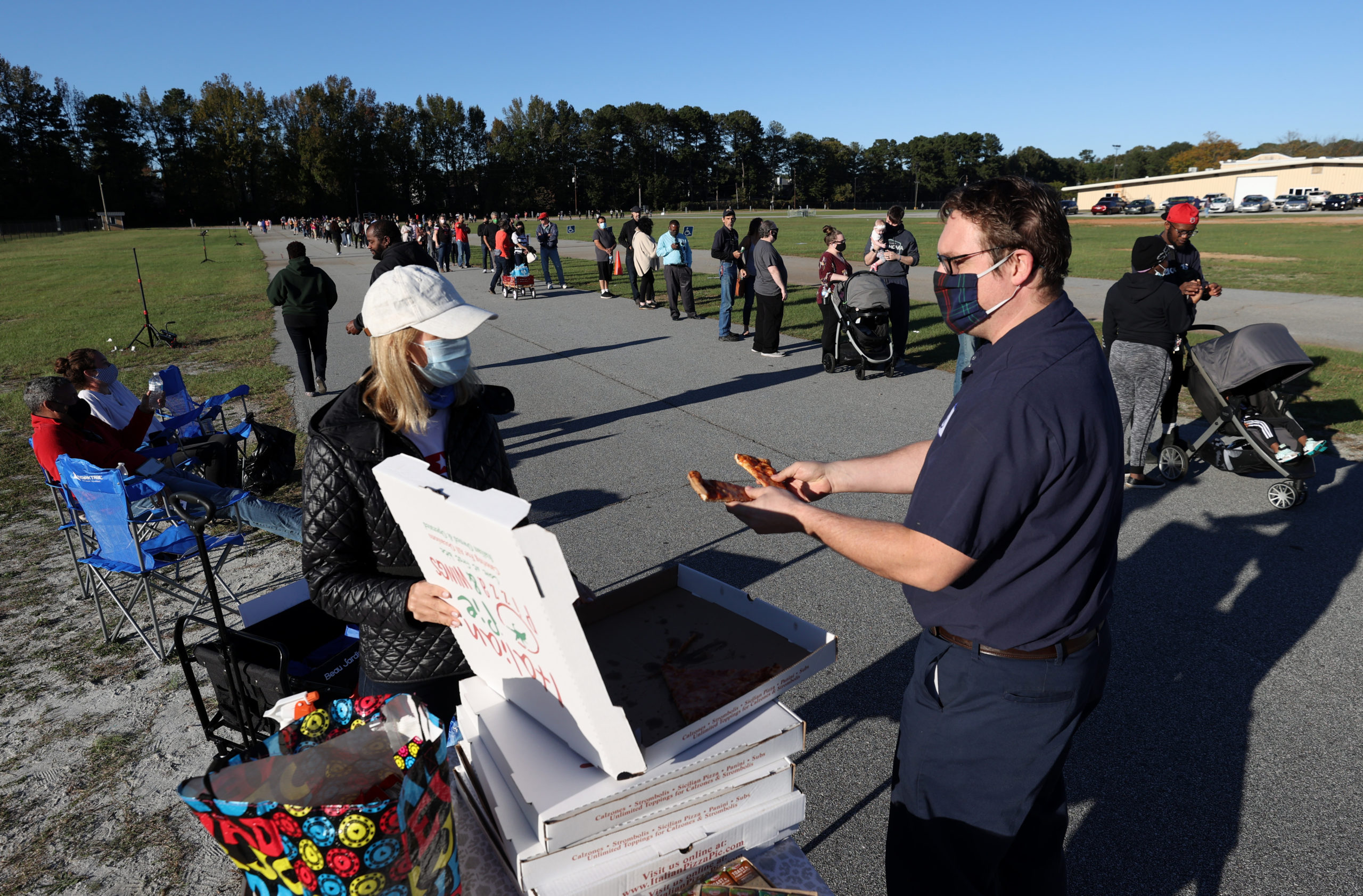 LAWRENCEVILLE, GEORGIA – OCTOBER 30: Katie LaFleur (L) passes out pizza to people waiting in line to vote at the Gwinnett County Fairgrounds on October 30, 2020 in Lawrenceville, Georgia. Hundreds of people lined up for about an hour to cast their ballot on the final day of early voting in Georgia. (Photo by Justin Sullivan/Getty Images)

“We received numerous complaints and have multiple investigations into active campaigning within restricted areas and to giving away things of value for voting, both of which are illegal,” Raffensperger told National Review.

Democratic Georgia state Rep. Matthew Wilson is currently under investigation by the state attorney general’s office for allegedly passing out pizzas outside a polling station in 2018, according to the Brookhaven Reporter. Multiple voters filed complaints against Wilson.

Democratic Georgia state Rep. Roger Bruce is also under investigation for line-warming. He was photographed passing out snacks to voters at a county courthouse wearing a “State Representative Roger Bruce” shirt, the Douglas County Sentinel reported.

The right to vote is sacred and fundamental to our democracy, and I am committed to upholding that right for all Georgians. pic.twitter.com/EQTKWh6yEa

Even before SB 202, Georgia’s new election integrity law, the state had banned “giv[ing] or receiv[ing], offer[ing] to give or receive, or participat[ing] in the giving or receiving of money or gifts for the purpose of registering as a voter, voting, or voting for a particular candidate in any primary or election.” (RELATED: State Sen: Georgia Modeled Polling Station Food And Drink Ban On New York Law)

Despite these warnings, the 501(c)4 organization Pizza to the Polls delivered 243 pizzas to Georgia polling stations on Jan. 5.

Pizza to the Polls delivers free pizza to polling stations where voters or campaigns request it.

Multiple groups even admitted to engaging in line-warming in a federal lawsuit. The African Methodist Episcopal (AME) Church, the Muslim Voter Project, the Latino Community Fund of Georgia, and Delta Sigma Theta sorority argue that “providing water and other resources” allows those groups to “engage in ‘the type of interactive communication concerning political change that is’… protected speech under the First Amendment.”