Less than three months ago, President Joe Biden stood in front of the U.S. Capitol in the wake of the Jan. 6 riots and delivered his inaugural address. He called for unity, and Americans who see a politically fractured country welcomed it. He could have then put together an agenda that would have accomplished many of his goals while also helping heal the country. On COVID-19, infrastructure and other matters, there was a road to garnering massive bipartisan support. We focus a lot on disagreements, but in each of these areas, average citizens share a broad consensus that Biden could have reached.

Oddly, after dedicating his inauguration to national unity, Biden has abandoned the pursuit entirely.

Biden pushed through a thoroughly partisan COVID-19 bill. The lockdowns smashed the livelihoods of many Americans. There was broad bipartisan consensus to provide further relief to small businesses and individual Americans. There was also support for further funding to speed vaccine deployment. By focusing on these core COVID-19-related areas, Biden could have achieved the first major bipartisan success in many years. 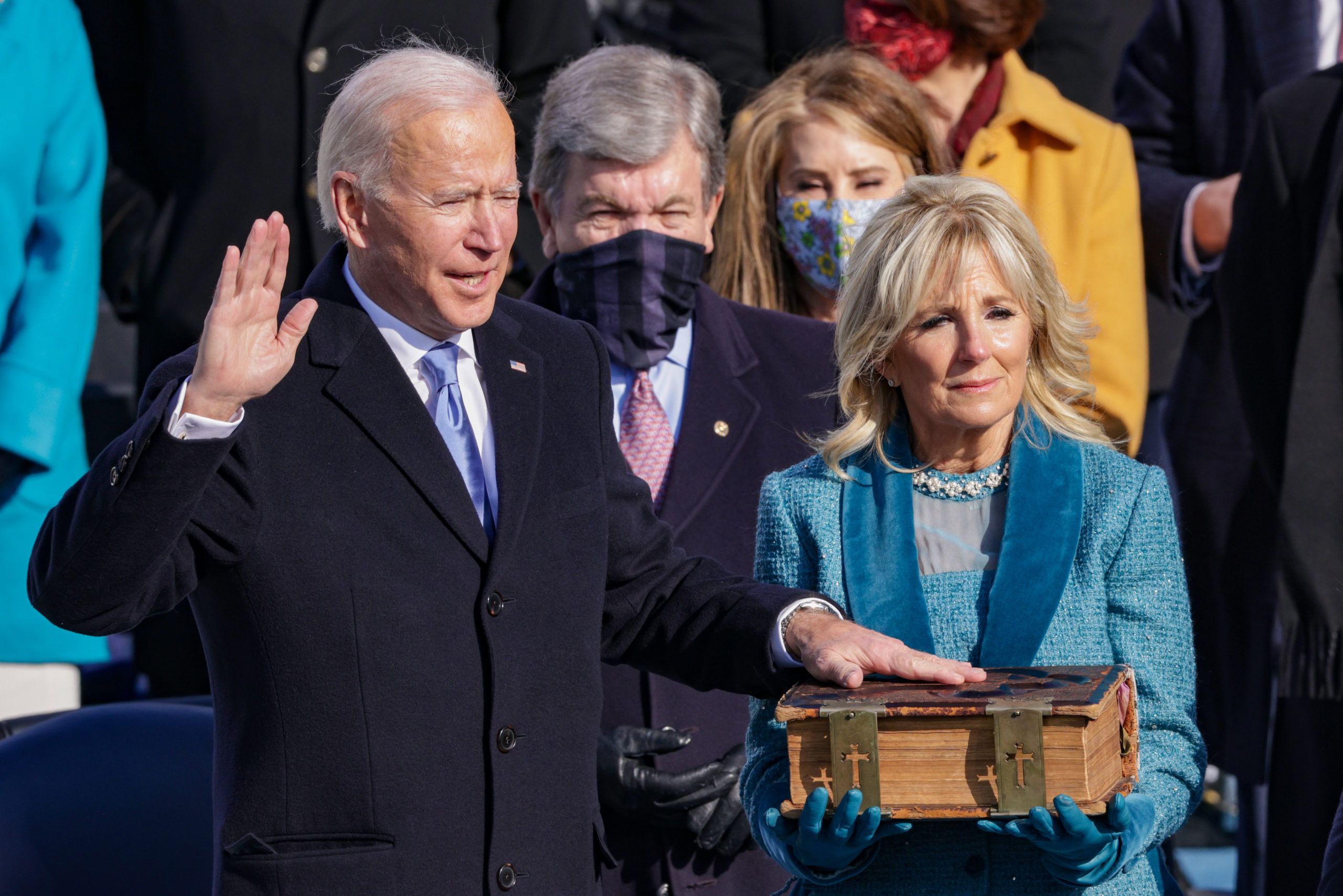 WASHINGTON, DC – JANUARY 20: Joe Biden is sworn in as U.S. President as his wife Dr. Jill Biden looks on during his inauguration on the West Front of the U.S. Capitol on January 20, 2021 in Washington, DC. (Photo by Alex Wong/Getty Images)

A group of 10 influential Republicans approached him with such a package. Biden rejected them and instead signed the most expensive spending bill in U.S. history, without a single Republican vote. This $1.9 trillion monstrosity delayed relief for average Americans by weeks in order to include non-COVID-19 related pork. It even changed the formula for aid to state and local governments to favor larger blue states over smaller red states. (RELATED: Biden’s $1.9 Trillion Stimulus Plan: Here’s What’s In It)

Furthermore, Biden’s positions on voting and elections are not only partisan but corrosive. Biden, like all Democrats and Republicans, believes that looser voting rules help Democrats. Democrats and their media allies therefore scream about disenfranchisement, racism and voter suppression in the face of even the most reasonable proposals.

This debate has come to a head over Georgia’s new voting laws. Georgia has endured two consecutive election cycles fraught with accusations of foul play. Former Democrat gubernatorial candidate Stacey Abrams still insists her 2018 race was stolen. Former President Donald Trump similarly insists he was robbed. Putting aside the merits of either claim, confidence in our elections is essential.

It is not just reasonable but necessary to take a close look at Georgia’s voting laws — but Biden is not engaging in reasonable debate. He immediately blasted the law as “Jim Crow on steroids.” It’s about as divisive a charge as can be made. Jim Crow laws enforced segregation in schools, restaurants, hospitals and even marriage. They were completely antithetical to the ideals of our country. It’s hard to envision anything as destructive to the cause of national unity as comparing election security to racial segregation. (RELATED: ‘Jim Crow 2.0’: Critics Compare Georgia’s Voting Integrity Bill To Racial Segregation)

Biden provided three main arguments. First, he said the new law in Georgia was “sick” and “un-American” because it ended voting at 5 p.m., when working people were just getting off work. But that’s false. Voting in Georgia is open until 7 p.m., and anyone in line by then is entitled to vote. The new law made no changes to that rule. Biden was so wrong that even The Washington Post’s fact-checkers gave him four “Pinocchios” — their worst score. The Post explained that “the law did make some changes to early voting. But experts say the net effect was to expand the opportunities to vote for most Georgians, not limit them.”

Second, Biden claimed the Georgia law prohibited giving water to people waiting in line to vote. Here, again, the president was not telling the truth; the Georgia law allows polling officials to provide water. What the law prohibits is interested parties giving gifts of any kind (including food or water) to try to influence voters in line. Georgia’s secretary of state justified this restriction based on numerous cases of “line warming.” Examples include a candidate giving out pizza to influence voters in line within restricted voting areas designed to be free from campaigning. 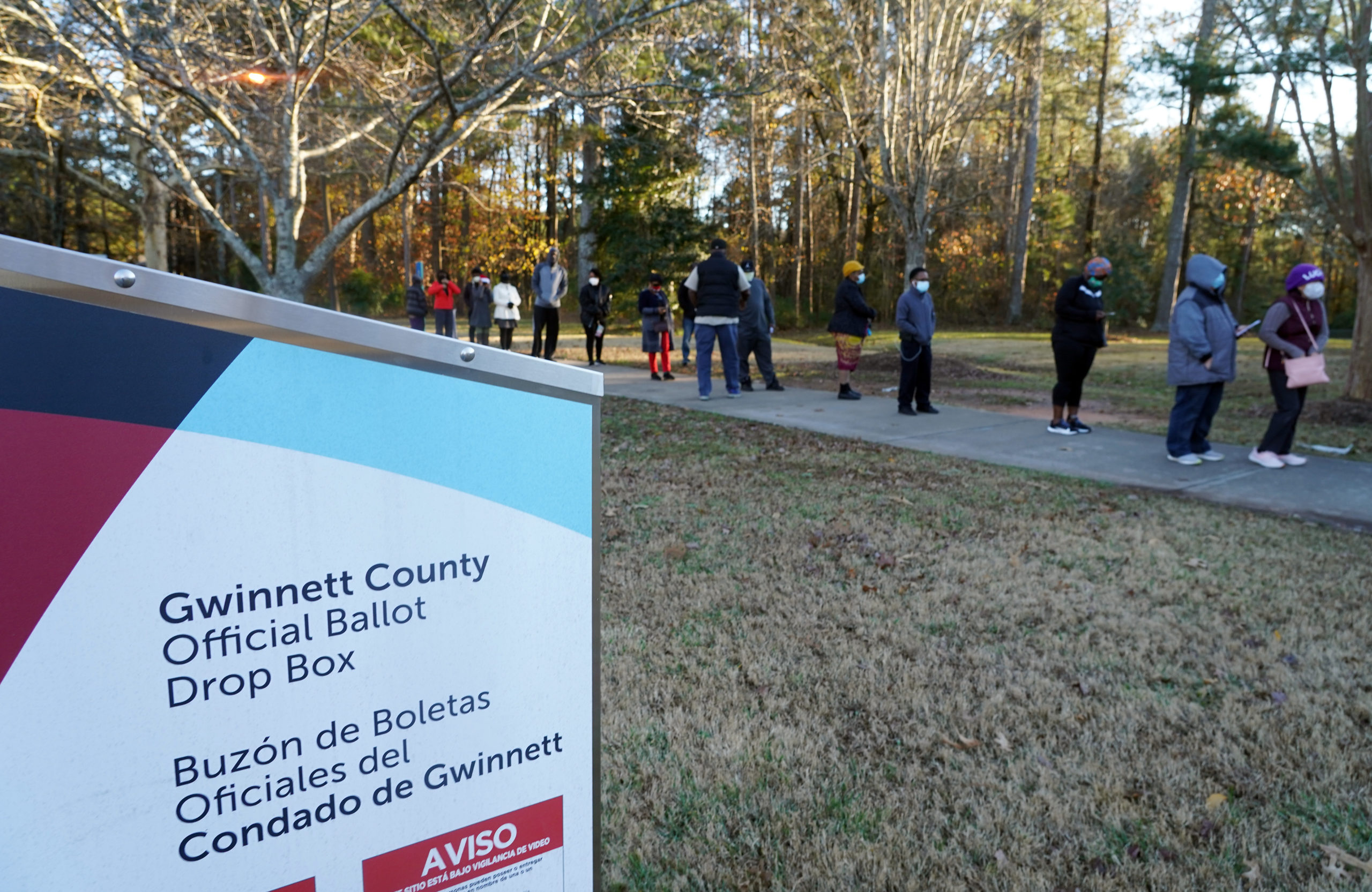 Voters stand in line to cast their ballots during the first day of early voting in the US Senate runoffs at Lenora Park, December 14, 2020, in Atlanta, Georgia. (Photo by Tami Chappell / AFP) (Photo by TAMI CHAPPELL/AFP via Getty Images)

Finally, Biden attacked the Georgia law for requiring photo IDs to vote. Democrats love to claim ID requirements are racist, but the argument is hard to defend. Georgia offers free IDs to any resident. Thirty-five states have some form of ID requirement for voting. Allowing voting without ID significantly increases the chances or perception of fraud. And most importantly, IDs are required for numerous activities in day-to-day life. To assert that black people are somehow incapable of procuring them is belittling and racist. (RELATED: Poll: 75% Of Likely US Voters Support Voter ID, Including 60% Of Democrats)

Biden has every right to oppose the Georgia election law. But the way he has done it is corrosive to the healing he has promised. The president even encouraged Major League Baseball to move their All-Star Game in response to the law. Supporting economic boycotts based on false charges of racism is, of course, the polar opposite of promoting national unity.

Biden’s next signature piece of legislation, infrastructure, should be super popular. Biden could pass a bill to fix bridges and roads, and even provide broadband internet, with massive bipartisan support. Instead, he’s proposing a multitrillion-dollar spending plan filled with partisan, noninfrastructure goals. He’s using the popularity of infrastructure investing to shoehorn a left-wing agenda into the bill.

It’s not clear what changed so drastically for Biden since his inauguration. Reporters say he now envisions himself as the next FDR — changing our country through massive government intervention. In a nation as divided as ours, this sort of aggressive left-wing movement is sure to increase the already gaping political fault lines. It’s also likely to boomerang. People did not vote for change of this nature. Just because it may be possible to squeeze through these changes doesn’t mean it’s smart. The political backlash could be severe.

The saddest part is Biden never even gave a unity agenda a chance. Our country needs the healing he promised. Biden delivers the opposite.