Firearm retailers reported to their trade association, the National Shooting Sports Foundation, that 40% of their customers during the Surge of 2020 were first time gun buyers. This works out to an estimated 8 million new gun owners in 2020, and March NICS data shows that surge in sales is a new era rather than a short-lived spike.

One year ago, we marked a new all-time record for monthly NICS background checks numbers after March 2020 saw more than 3.7 million, which bested the previous record by more than four hundred thousand checks. As the pandemic was joined by additional societal stressors, the surge in gun sales only picked up the pace. The March 2020 record only lasted until June 2020, and that record only stood until December. Comparatively low-points in between still set the records for each calendar month.

This total includes 1,145,307 handgun-related NICS checks and 666,772 related to long guns. It also includes 663,609 permit checks, bringing the year-to-date permit total to 1,816,772. Permits are important because some states allow the presentation of a valid permit in place of a NICS check for the purchase of a firearm. The NRA has also led efforts to allow Permitless Carry in twenty states, so far. Alternatively, some states require a permit to be obtained before one can lawfully acquire a firearm. The chart below shows the number of background checks for permits – not including permit re-checks – by year.  By the end of the first quarter of 2021, we are outpacing last year in terms of permit checks. 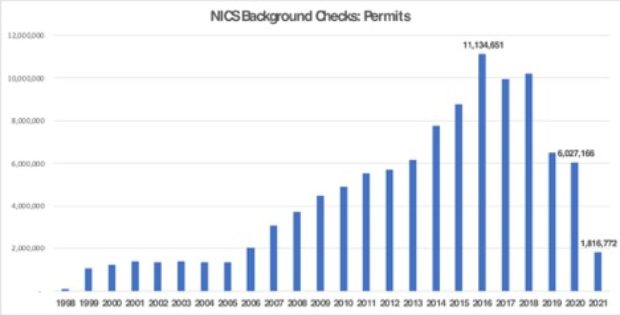 Let’s take a look at the checks related to handgun and long guns by year. Long gun related checks have been fairly steady since NICS came online but did peak last year at more than 7.13 million. Handgun related NICS checks increased steadily since the early 2000s, though 2015, 2016, and 2017 saw a larger than usual increase.

Then there was 2020. The number of handgun related NICS checks conducted last year beat the old record by more than 3.8 million. These numbers do not include checks related to multiple sales, sales finalized with a permit instead of a NICS check, or sales of certain types of pistols in some states. Again, there is nothing to suggest that interest in firearms among non-owners has changed since last summer and so we could reasonably apply that 40% estimate to the sales-related numbers. Not every background check leads to a sale and some sales involve multiple firearms, but we’re looking at estimates only. Based on that 40% report from retailers, there may be more than 1.2 million new handgun owners and 738,507 new long gun owners so far in 2021.

That is an estimate based on an estimate, but it is unlikely to be far off. It’s clear that the growth of the firearms-owning community experienced in 2020 is continuing into the new decade.

Established in 1975, the Institute for Legislative Action (ILA) is the “lobbying” arm of the National Rifle Association of America. ILA is responsible for preserving the right of all law-abiding individuals in the legislative, political, and legal arenas, to purchase, possess and use firearms for legitimate purposes as guaranteed by the Second Amendment to the U.S. Constitution. Click here to follow NRA-ILA on Facebook.