Ambassador to the United Nations Linda Thomas-Greenfield’s recent embrace of “woke” rhetoric has caused concern that progressive self-flagellation on the world stage could allow human rights offenders to get away with actions such as genocide.

Thomas-Greenfield told an activist group last Wednesday the U.S. is seeking to rejoin the U.N. Human Rights Council (UNHRC), from which former President Donald Trump withdrew in 2018. But she added that attempting to rejoin would have to be done with “humility” given America’s history of racial discrimination.

“I have seen for myself how the original sin of slavery weaved white supremacy into our founding documents and principles,” Thomas-Greenfield said. “We are an imperfect union — and have been since the beginning.”

“I’ve seen for myself how the original sin of slavery weaved white supremacy into our founding documents and principles.”pic.twitter.com/lODdbFeLob

The ambassador also mentioned multiple instances of alleged racism she personally faced around the world, but only managed to work in passing references to human rights violations such as Burma’s treatment of the Rohingya or China’s alleged genocide against the Uyghurs.

The Biden administration signaled its intent to rejoin the UNHRC earlier this year when Secretary of State Antony Blinken announced Feb. 8 that the U.S. would become a non-voting observer on the Council.

The Wall Street Journal editorial board argued Thursday that Thomas-Greenfield’s comments about “humility” assume a false moral equivalence between the U.S. and UNHRC member states currently committing genocide or other abuses.

The UNHRC has been criticized for corruption and including some of the world’s worst human rights offenders within its ranks. Current members include countries with documented histories of human rights violations such as China, Russia, Cuba and Venezuela. Saudi Arabia was previously elected UNHRC chair in 2015 despite criticism from watchdog groups.

The UNHRC also appears to share Thomas-Greenfield’s reflections on racial discrimination in the U.S., even though the agency has failed to hold China accountable for its alleged genocide in Xinjiang or other cases of human rights violations around the world.

After George Floyd’s death last year in a police-involved killing, the UNHRC voted unanimously to authorize a “report on systemic racism, violations of international human rights law against Africans and people of African descent by law enforcement agencies,” in the U.S.

The Russian envoy to the UNHRC denounced the “calamitous state of human rights” in the U.S. while the Chinese envoy called out the U.S. for “chronic and deep-rooted racial discrimination,” the Associated Press reported.

“International human-rights law protects the right to freedom of expression, association, and peaceful assembly,” she said. “It is regrettable that the United States has chosen to respond to the protests in a manner that undermines these fundamental rights.”

President Joe Biden claimed in a Feb. 4 speech that the U.S. will be “a much more credible partner” in international diplomacy if steps are taken to “acknowledge and address systemic racism and the scourge of white supremacy.”

But this strategy does not appear to be working. During a U.N. General Assembly meeting in March, Thomas-Greenfield accused China of abuses against Uyghurs and other minority groups, which her Chinese counterpart brushed off by shifting blame toward the U.S. 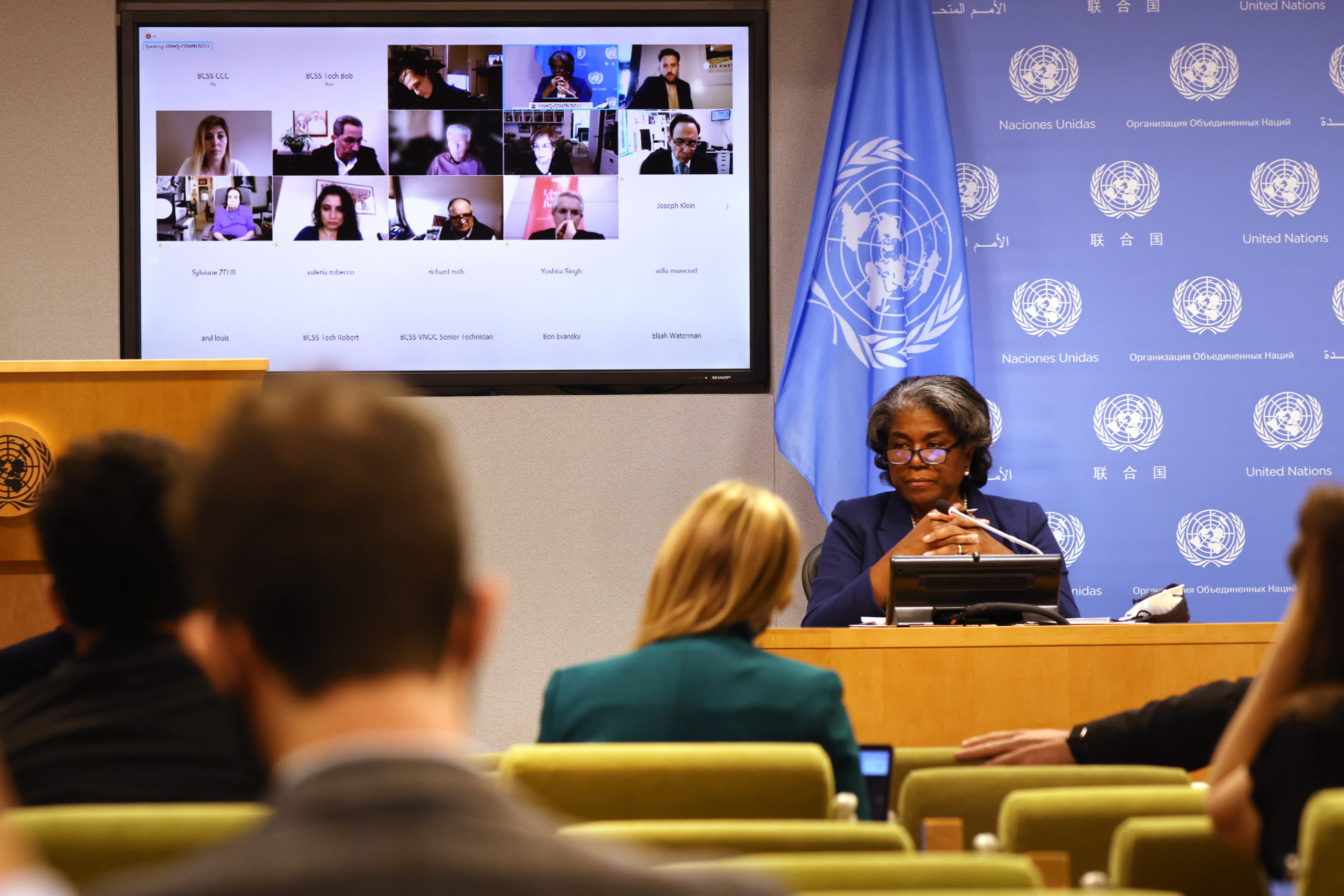 US Ambassador to the United Nations Linda Thomas-Greenfield speaks to the media on March 01, 2021 in New York City (Spencer Platt/Getty Images)

China’s deputy U.N. Ambassador Dai Bing said the U.S. does not have “the license to get on a high horse and tell other countries what to do,” according to Reuters.

“If the U.S. truly cared about human rights, they should address the deep-seated problems of racial discrimination, social injustice, and police brutality, on their own soil,” he added.

Thomas-Greenfield had an opportunity to more forcefully respond to her Chinese counterpart, perhaps by bringing up reports of forced labor and sterilization in Xinjiang. She instead reinforced China’s accusations by apologizing for America’s “serious flaws” and talking about her own experiences with racism. (RELATED: There’s A Fat Red Flag That America Has Already Lost The War With China)

“We have flaws. Deep, serious flaws,” Thomas-Greenfield said, according to Reuters. “But we talk about them. We work to address them. And we press on, in hopes that we can leave the country better than we found it.”

The Biden administration’s diplomatic apologia may be the perfect ammunition for human rights offenders like China to get away with actions like genocide. If Thomas-Greenfield is more intent on confronting America’s history of racial discrimination on the world stage, it may be no surprise that China and other countries no longer take the U.S. seriously.