Cardi B said she is “starting to hate America” after a Wisconsin Republican Rep. Glenn Grothman criticized her Grammy performance as “inconsistent with basic decency.”

“This is why I’m starting to hate America,” the 28-year-old rapper captioned her Thursday post on Instagram. “People are in need of therapy just of the shit we see on the internet alone when it comes ot police brutality.” (RELATED: Cardi B Defends Choosing Kylie Jenner For New Music Video After Fans Start A Petition To Remove Her)

“We have a real crisis in hour hand but this is what Wisconsin Representative [Glen Grothman] decided to speak on today-___-I’m fuckin done,” she added. (RELATED: Cardi B Rants About Taxes And The IRS In Incredible Video)

The post included a clip of Grothman on the House floor. She has since deleted the post. The screenshot of the comments can be seen below. 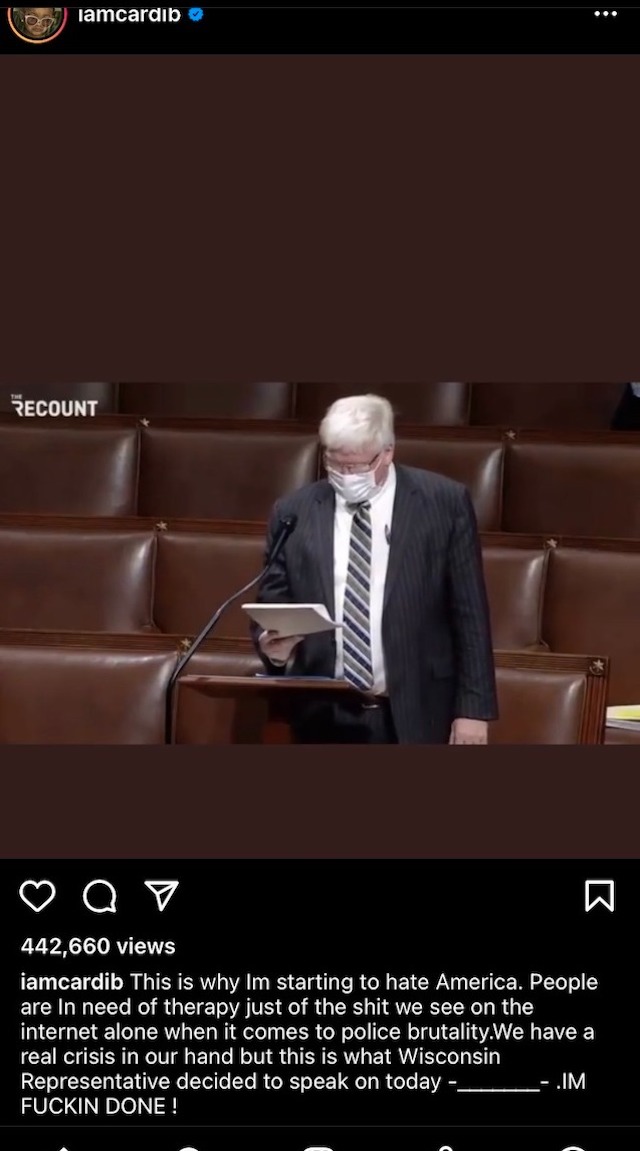 Here’s a clip of the congressman’s comments.

Rep. Glenn Grothman (R-WI) is complaining about @iamcardib’s Grammys performance and “the moral decline of America” on the House floor this morning. pic.twitter.com/gvBuAZTcQF

“I received complaints in my office, and rightfully so, about Cardi B and the Grammys,” Grothman shared on the House floor Thursday, UPROXX reported. “They wonder why we are paying the FCC if they feel that this should be in living rooms across the nation.”

“I realize that Kamala Harris has used her fame to promote this performer, but I assure the FCC that millions of Americans would view her performance as inconsistent with basic decency,” he added. “Wake up, FCC, and begin to do your job! The moral decline of America is partly due to your utter complacency.”

“This gets me so mad ya don’t even know!” Cardi tweeted to her millions of followers. “I think we all been on the edge this week since we seen police brutality back to back including watching one of the biggest case in history go down DUE to police brutality but wait ! This is [what] state representative decide to talk about.

The superstar performance at this year’s Grammy Awards with Megan Thee Stallion resulted in more than a thousand complaints to the Federal Communications Commission for its risque nature, the outlet noted.