The restaurant industry took a massive hit when the coronavirus pandemic hit and states began implementing severe lockdown measures that forced many to shutter their doors. While recovery is imminent and happening, there are still restaurants struggling to make a comeback – and their location isn’t surprising.

Google ad-words data reached a record number of 133 million searches in March for phrases like “restaurants near me” and other related terms, according to a study by Chef’s Pencil. March also saw the best sales month since the start of the pandemic, according to the study.

The success, however, has not been evenly distributed across the nation.

The National Restaurant Association revealed the restaurant industry lost more than three million jobs and $25 billion in sales in just three weeks of March of 2020. At the time, seven in 10 restaurant owners laid off employees and reduced hours worked, while approximately 50% anticipated more layoffs and hours reductions.

By September, the association found one in six restaurants, which translated to approximately 100,000 restaurants, closed either permanently or long term, and that nearly three million employees were still out of work.

Restaurants in Memphis could open without restrictions but have to follow social distancing guidelines, according to WREG Memphis.

Meanwhile in Texas, which implemented lockdown measures in 2020 but swiftly moved to reopen in some capacity by April of 2020, restaurants have been allowed to open at full capacity. In San Antonio, restaurants can open at 100% capacity but must follow health and safety guidelines.

The cities with the slowest rates of recovery are located in states that implemented severe lockdown restrictions.

California, home to both San Francisco and Oakland, implemented some of the toughest lockdown restrictions. (RELATED: Takeout Only: How California Elites Crushes LA’s Local Restaurants)

Democratic Gov. Gavin Newsom declared a stay-at-home order on March 19, 2020, and restaurants were forced to offer takeout, pickup and delivery services only, the Los Angeles Times (LA Times) reported. By the end of May, counties like Los Angeles County were allowed to reopen indoor dining facilities to 60% capacity, the LA Times reported.

Following a spike in cases, Newsom ordered seven counties, including Los Angles, to close bars, breweries and pubs that served alcohol without serving food, according to the report. The state also ordered 19 counties to stop indoor dining.

By September only certain counties had permitted indoor dining to resume and by December another stay-at-home order was issued.

Newsom lifted the state’s stay-at-home order and outdoor dining ban in January, both of which had been in effect since December. As of March, San Francisco restaurants can be open, but at limited capacity, just as other cities in the state must do.

Meanwhile in New York City, restaurants have struggled to regain standing, fighting the state on its indoor dining rules. 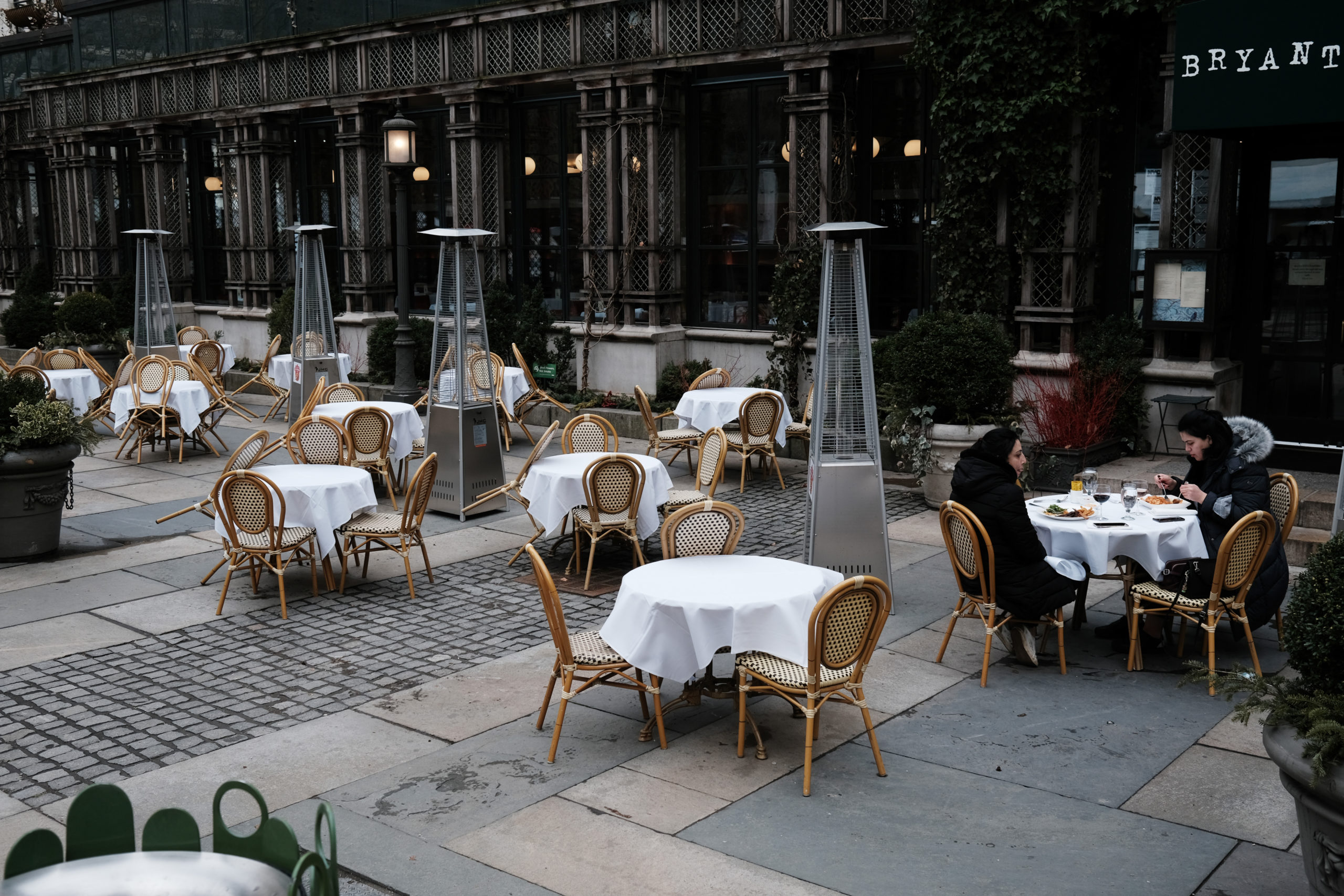 NEW YORK, NEW YORK – MARCH 01: Empty tables stand at a restaurant in Manhattan on March 01, 2021 in New York City. New York City, the nation’s largest city and cultural capital, is still suffering from a lack of tourists and workers who have not returned in large numbers since the pandemic outbreak. (Spencer Platt/Getty Images)

The state shut down all non-essential businesses on March 16, 2020. New York City restaurants were only allowed to open for takeout and delivery and could not open for outdoor service until June. Restaurants were able to resume indoor dining at limited capacity in September but were forced to resort to outdoor dining in December.

The back-and-forth prompted a group of restaurant and bar owners to file a class-action lawsuit against Democratic New York City Mayor Bill de Blasio and Democratic Gov. Andrew Cuomo, arguing indoor dining was safe as it didn’t force people to congregate in homes.

Indoor dining returned on Valentine’s Day at 25% capacity and was eventually expanded to 50% in mid-March.