As Palestinian youth tossed firecrackers and lit dumpster fires, far-right, ultra-nationalist Jewish groups chanted and displayed anti-Arab slogans such as “Death to Arabs,” “Revenge,” and “Death to terrorists,” with some throwing stones and also lighting fires, reported the Jerusalem Post and the Times of Israel.

The clashes came following recent attacks against Jews in Israel by Arabs during Ramadan.

Israeli Police on horseback and wearing riot gear struggled to keep both sides from harming each other in the riots, which went on for hours up until early morning Friday, according to reporting from Reuters. 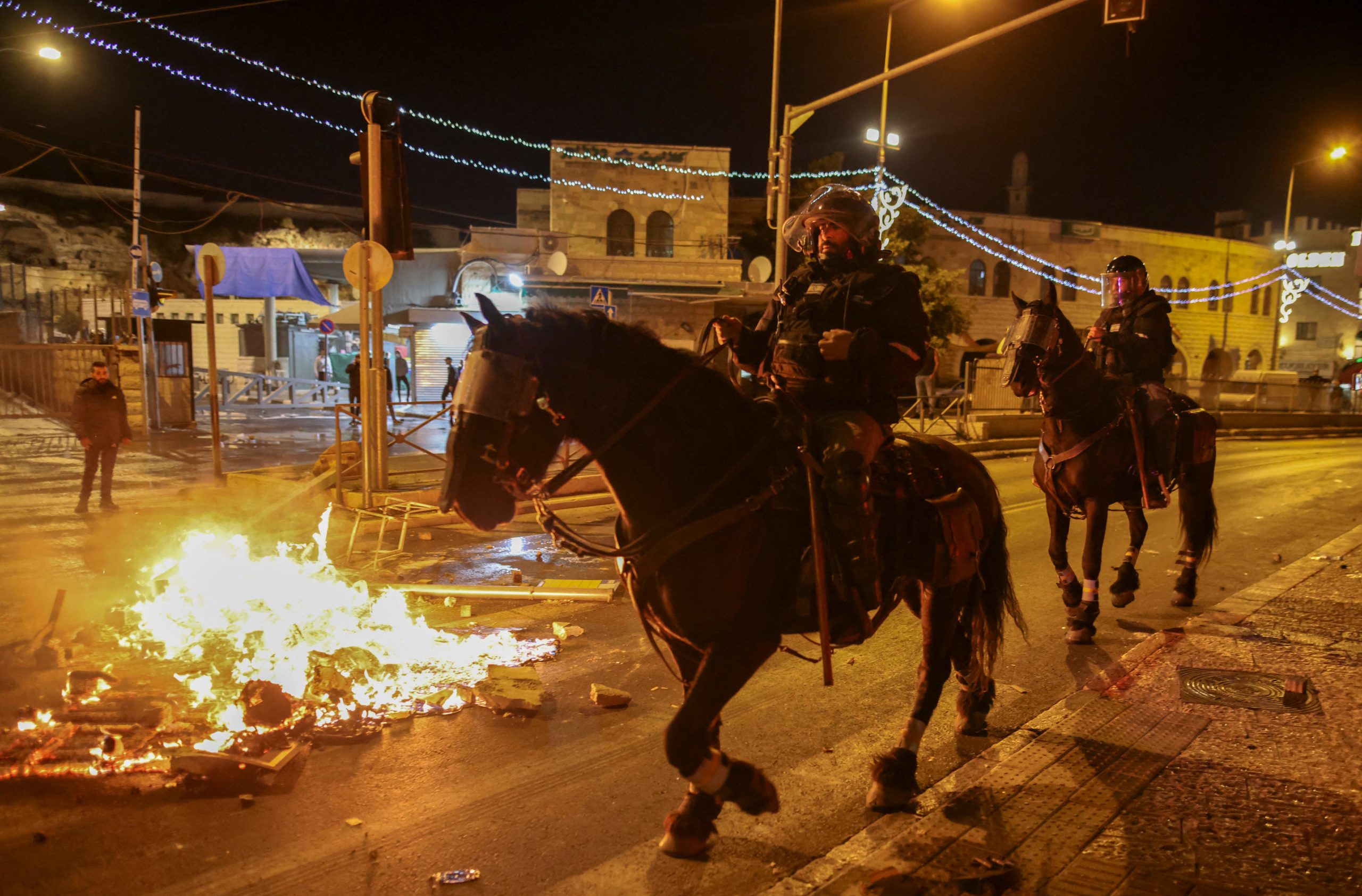 Members of the Israeli security forces deploy during clashes with Palestinian protesters outside the Damascus Gate in Jerusalem’s Old City on April 22, 2021. (Photo by AHMAD GHARABLI/AFP via Getty Images)

As officers used stun grenades, tear gas, and “skunk water” to disperse the riots, both sides hurled stones and bottles at each other, the BBC reported. Multiple police officers caught in the crossfire, trying to keep the peace, were injured. In numerous instances, officers tried to form human barricades to separate the groups, according to reports. (RELATED: ‘Dangerous For Israel’: Former Israeli Ambassador Criticizes Biden’s Potential Iran Deal)

Neighborhoods, where the riots took place, included areas near the Damascus Gate, Zacks Junction, Van Passen, Yehudai Junction, Shivtei Yisrael Junction, the Third Wall with Bar-Lev Road, Haneviim Junction, and those near the Nablus Gate, according to Israeli Police. 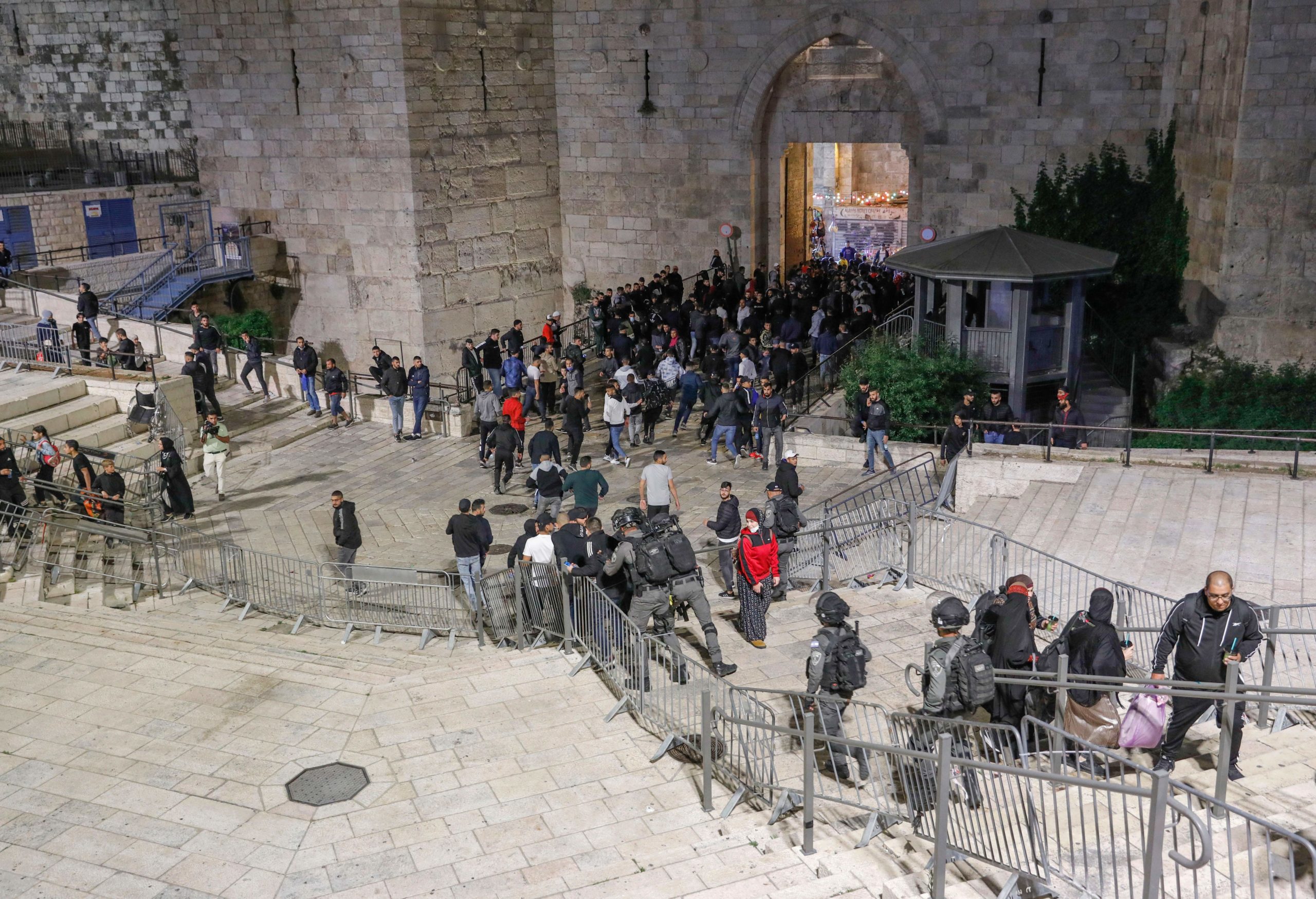 Members of Israeli security forces deploy amid clashes with Palestinian protesters in Jerusalem, on April 22, 2021. (Photo by AHMAD GHARABLI/AFP via Getty Images)

Yahya Gerdi, a Jewish father of nine, got caught in the violence while on his way to pray at the Western Wall, according to Arutz Sheva.  Palestinian rioters reportedly caught and beat him up before setting his car on fire.

“They came to me, they wanted to kill me there. I thought I would die. They wanted to stab me with a knife,” Gerdi recounted from his hospital bed in a video released by Kan News Israel.

Near Herod’s gate, a Jewish motorist’s car was stoned by Palestinian rioters who then beat him before similarly setting his car aflame, the Times of Israel reported.

A video circulated on social media that showed Jewish youth attacking what appeared to be an Arab home in the Old City. Sounds of children crying are heard. 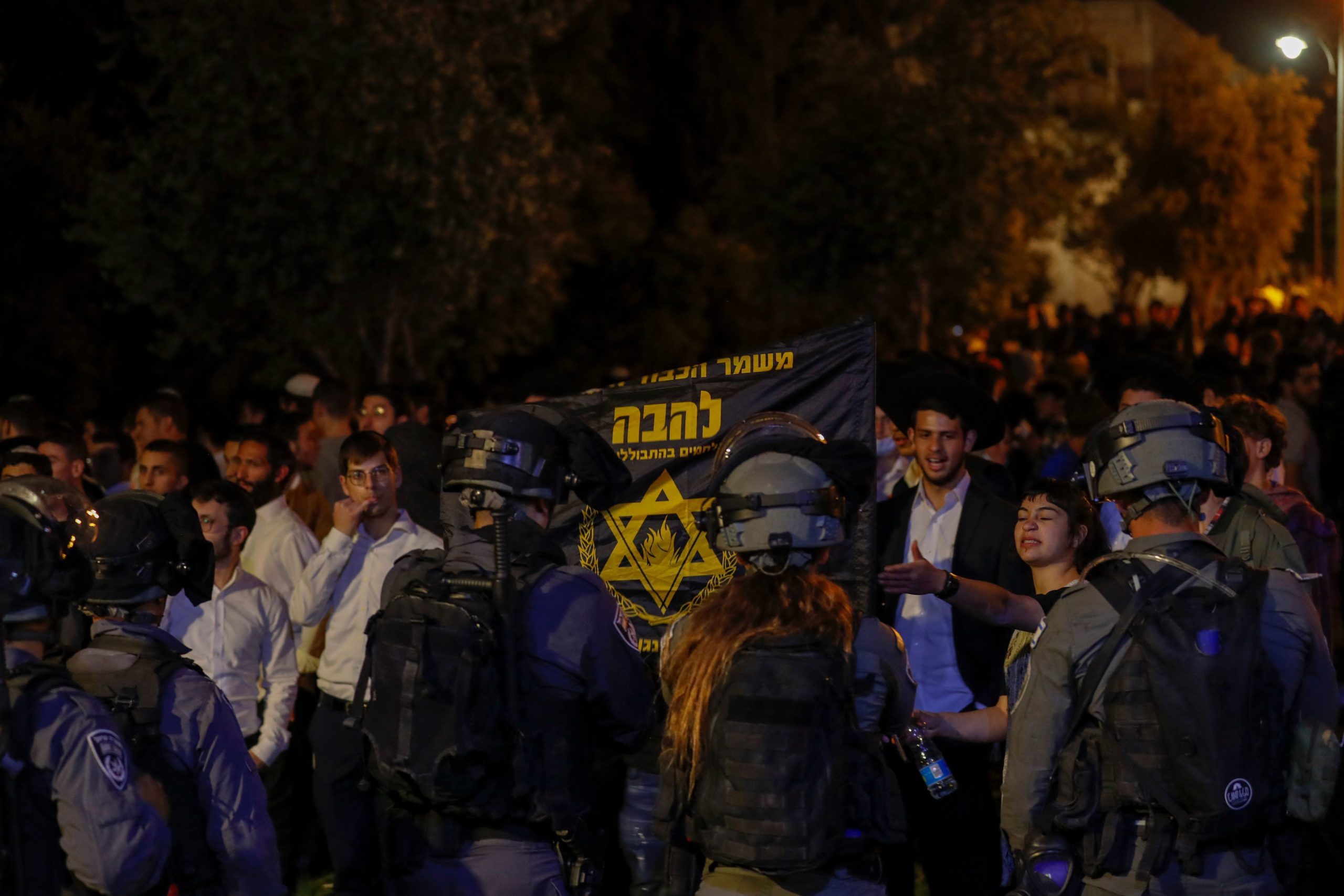 Members of the Israeli security forces stand guard as Jewish protesters gather outside the Damascus Gate in Jerusalem, April 22, 2021. (Photo by AHMAD GHARABLI/AFP via Getty Images)

Lehava had been planning what they called a demonstration of “national honor” for Thursday in response to viral videos on TikTok showing Arabs slapping Jews at random, according to Israel Hayom and Times of Israel.

Palestinians and Israeli Police have repeatedly clashed since the beginning of the Islamic holy month of Ramadan, on April 13, Reuters reported.

Palestinian residents of Jerusalem were upset that Israeli cops were setting up barricades preventing Palestinians from gathering on the steps of Damascus Gate, according to the Times of Israel and Al Jazeera. Sitting in the area after nighttime Ramadan prayers is a tradition for many Palestinian Muslims.

Interethnic clashes have also been occurring during Ramadan, with one of the most recent incidents occurring Sunday night after Arab residents attacked a Jewish rabbi looking for land to set up housing for his seminary students in a primarily Arab neighborhood of Tel Aviv, Arab News and Times of Israel reported.

On Friday afternoon local time, the United States Embassy in Jerusalem, Israel, issued a statement saying, “We are deeply concerned about the incidents of violence in Jerusalem over the last several days. We hope all responsible voices will promote an end to incitement, a return to calm, and respect for the safety and dignity of everyone in Jerusalem.”

A Statement by U.S. Embassy Jerusalem:

Palestinian terrorist group Hamas praised the violence committed by the Palestinian side during the clashes, calling it “an affirmation of the Arabism, Islamic and Palestinian [identity] of [Jerusalem], that [Jerusalem] cannot be subject to occupation or accept [Israel] and [Israel’s] fascist policies,” in a Friday press release.

Hamas further issued inciting statements, saying that “the battle of Jerusalem is a battle of civilization and a battle of identity and existence in this blessed city, and it is a battle of will between a people under occupation [Palestinians] and an occupying power [Israelis].”

Jerusalem is braced for further possible unrest Friday with the US Embassy, the United Nations, and Jordan calling for peace, according to the Times of Israel.