Yelp is no longer allowing reviews of Linnie’s Pub.

The bar went ultra-viral over the weekend after owner Jay Linneman made the decision to ban showing NBA games until LeBron James is thrown out of the league. (RELATED: David Hookstead Is The True King In The North When It Comes To College Football)

“If anyone wants to watch an NBA game, don’t come to Linnie’s Pub. We will not air them until LeBron James has been expelled from the NBA,” Linneman explained. The decision was made after LeBron James went after the police officer who shot Ma’Khia Bryant on Twitter. The officer shot Bryant as she appeared to try and stab another girl.

Ohio Bar Bans NBA Games On TV Until LeBron James Is Thrown Out Of The League https://t.co/fyRrPDVEH4

Well, you can no longer comment on the Ohio business’ Yelp page. According to Outkick, it was flooded with negative reviews.

When I went to check, I was greeted with a message that stated the following:

This business recently received increased public attention resulting in an influx of people posting their views to this page, so we have temporarily disabled the ability to post here as we work to investigate the content. While racism has no place on Yelp and we unequivocally reject racism in any form, all reviews on Yelp must reflect an actual first-hand consumer experience (even if that means disabling the ability for users to express points of view we might agree with). Learn more on Yelp Support. If you’re here to leave a review based on a first-hand experience with the business, please check back at a later date.

You can see a screenshot of the message below. 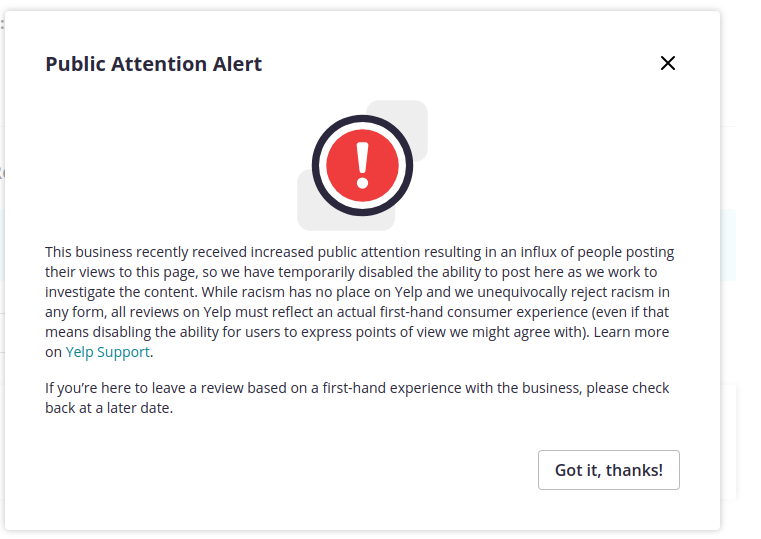 As of this moment, there are still many one-star and five-star reviews still up. So, it’s unclear whether or not Yelp purged any reviews or just stopped people from commenting any further.

I wish we could all say that we didn’t expect this to happen, but I think we all knew it would. Instead of having rational conversations, the internet just immediately goes for the throat.

It’s pathetic and sad, but it’s where we are. What LeBron did was so stupid that even O.J. Simpson came out as the voice of reason!

Hopefully, Linnie’s Pub isn’t destroyed over this decision, but people are clearly not handling the bar’s choice very well.