Police officers nationwide have quit in droves over the last year while law enforcement agencies have struggled to attract new recruits because of the increasingly “toxic” political environment, police groups said.

Major police departments across the country are reeling, reporting officer shortfalls in the hundreds, after a year that saw massive protests, riots and an uptick in anti-police attitudes, the groups told the Daily Caller News Foundation. The decline of morale and police officers in many major departments in the U.S. has coincided with large upticks in crime — the number of murders committed increased in 51 of the 57 cities with public data, according to data analytics reporter Jeff Asher.

“We’re very worried,” National Sheriffs’ Association (NSA) executive director and CEO Jonathan Thompson told the DCNF. “This may well have been the ulterior motive — to just make officers so uneasy and nervous to just retire and call it quits.”

Sheriffs in Minnesota and Wisconsin have reported “considerable morale challenges” since last summer, according to Thompson. He added that agencies in Arizona, New York and California have seen year-over-year retirements increase by up to 30%. (RELATED: This Lawyer Regularly Makes False And Unfounded Claims About Deaths That Inspired Riots)

“The community shows zero support. The city council are raging idiots, in addition to being stupid. Additionally, the mayor and council ignore actual facts on crime and policing in favor of radical leftist and anarchists fantasy,” a former Portland Police Department detective wrote in his exit interview statement, according to The Oregonian. 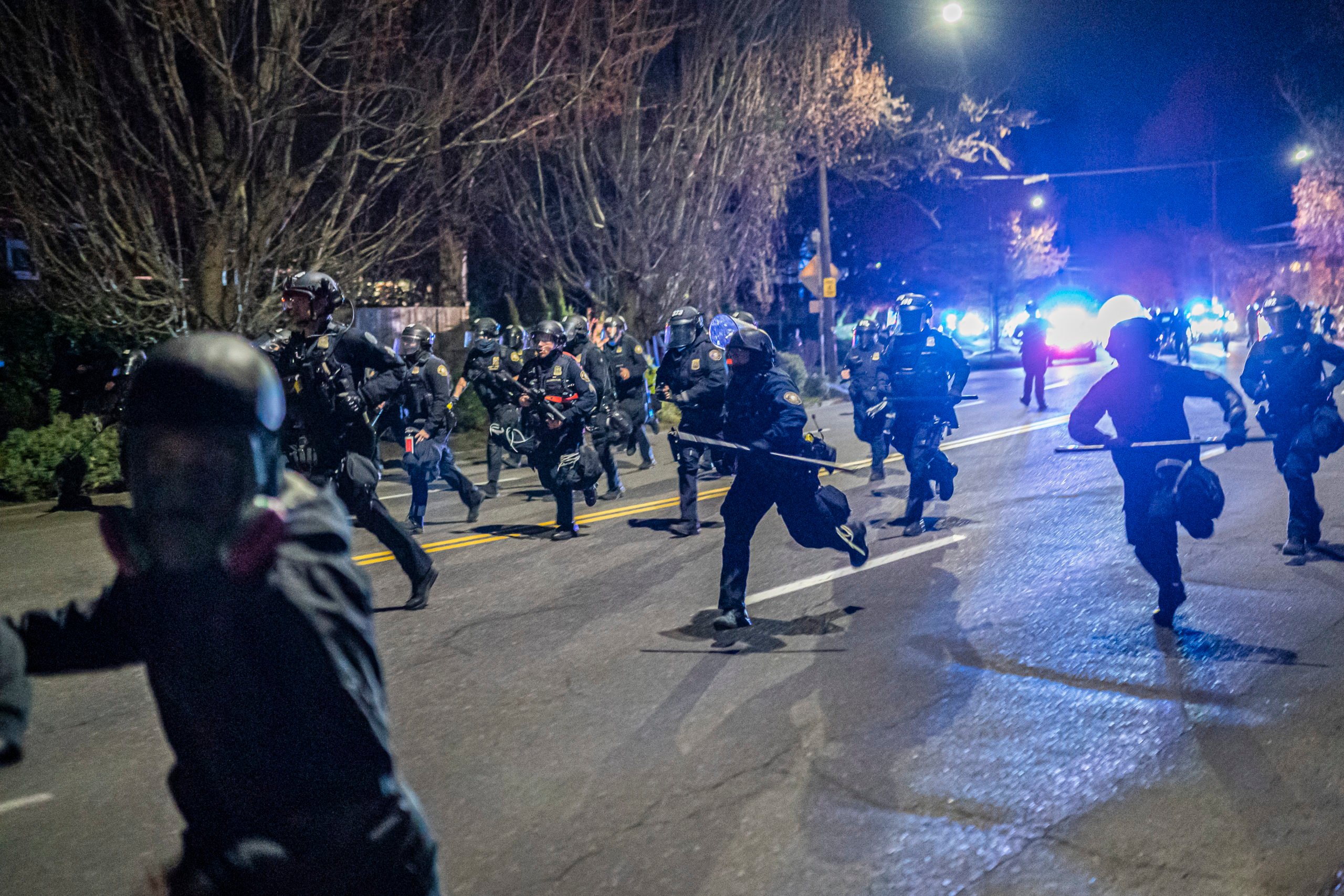 Portland police officers chase demonstrators after a riot was declared during a protest on April 12 in Portland, Oregon. (Nathan Howard/Getty Images)

The Fairfax County, Virginia, Police Department has also seen an exodus of officers in the last year, according to Inside NoVa. The department is down 188 officers and is expected to shed another 25 by the summer.

“We are seeing a large number of officers leaving the force,” Fairfax County Police Association (FCPA) President Jeremy Hoffman told the DCNF. “What’s just as disturbing as that is we’re having trouble recruiting, hiring and training people right now to replace those bodies as they leave.”

Violence, meanwhile, has reportedly surged in the county. More firearms have been seized in 2021 so far than in the previous ten years combined, Inside NoVa reported.

The widespread Black Lives Matter protests and the ensuing anti-police rhetoric in 2020 “injected steroids” into the issue of police feeling that county officials wouldn’t support them if they had to use deadly force while on patrol, Hoffman said. 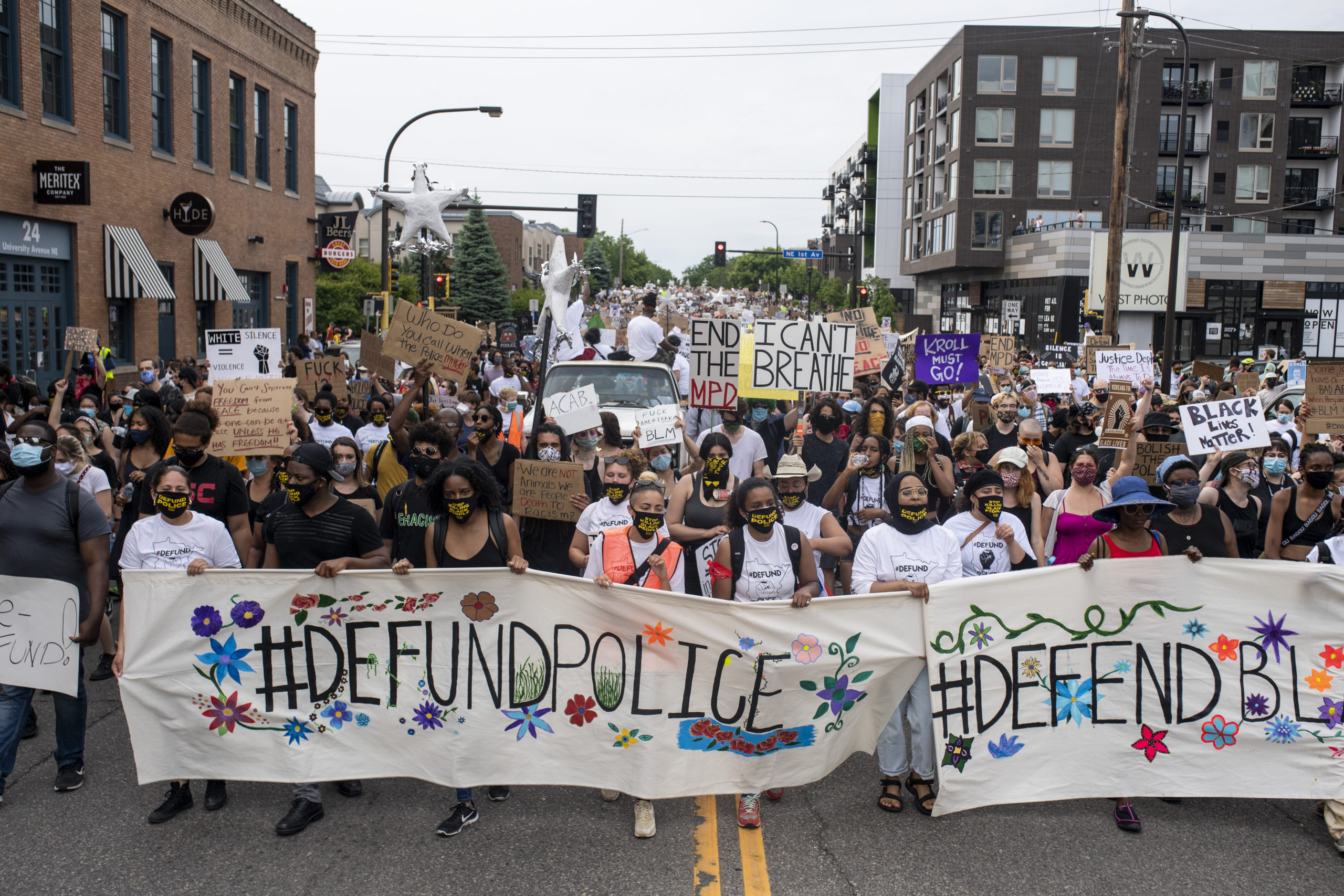 In the wake of the death of George Floyd, who died after former Minneapolis police officer Derek Chauvin kneeled on his neck for nine minutes, hundreds of protests and riots took place nationwide demanding greater police accountability. Chauvin was found guilty of second-degree and third-degree murder earlier this month.

But police almost universally condemned Chauvin’s actions in the aftermath of Floyd’s death. The National Fraternal Order of Police (FOP), the largest police union in the U.S., applauded Chauvin’s conviction and said due process was served.

“When you have a city council that is openly denigrating the men and women who are protecting them, and then turning around and insisting that they protect their house, it’s condescending, it’s terribly distracting, but it’s also demoralizing,” Thompson, the executive director and CEO of the NSA, told the DCNF. 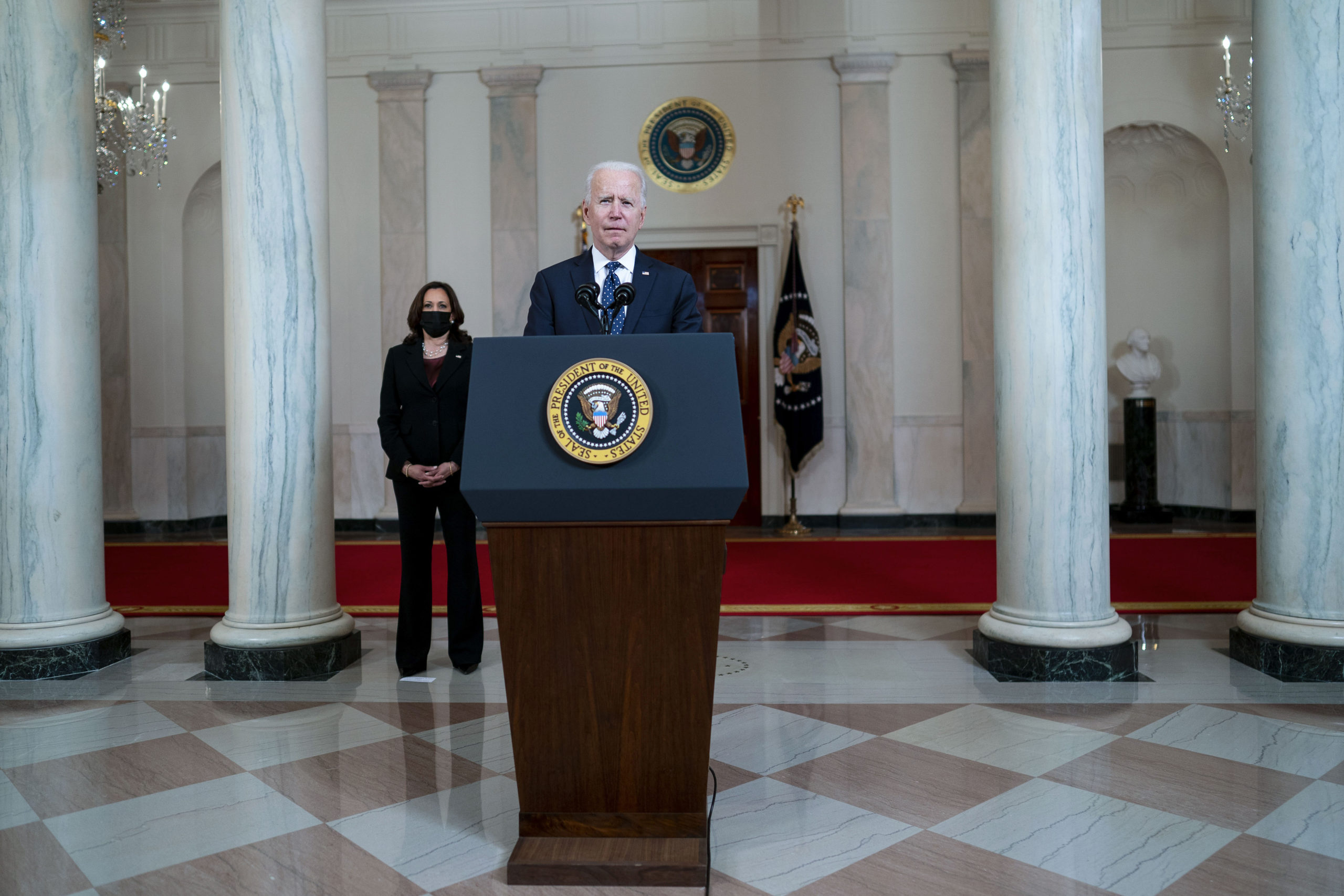 Additional protests and riots came as a result of the death of Breonna Taylor, who was shot and killed by officers during a drug raid in Louisville, Kentucky in March 2020. Taylor’s boyfriend fired the first gunshots during the late night raid.

Former Louisville police officer Brett Hankinson was charged with three counts of wanton endangerment for firing bullets into a nearby apartment during the gunfight, Kentucky Attorney General Daniel Cameron announced in September. The other officers, including the officer who killed Taylor, weren’t charged.

Roughly 230 officers have left the Louisville Metro Police Department in the last year, according to River City FOP Press Secretary Dave Mutchler. The department is now down to a total of around 1,070 officers even though its authorized strength is 1,325.

“We are definitely at a critical manpower shortage here,” Mutchler said in an interview. “The climate that we all find ourselves in right now is a lot more demanding and stressful on officers.”

“Morale is basically in the toilet,” he said. (RELATED: Debate Rages On Police Reform, Role Of Police Unions In Wake Of Floyd’s Death)

Mutchler noted the shortage affects rank-and-file officers who are on patrol, not department leadership. 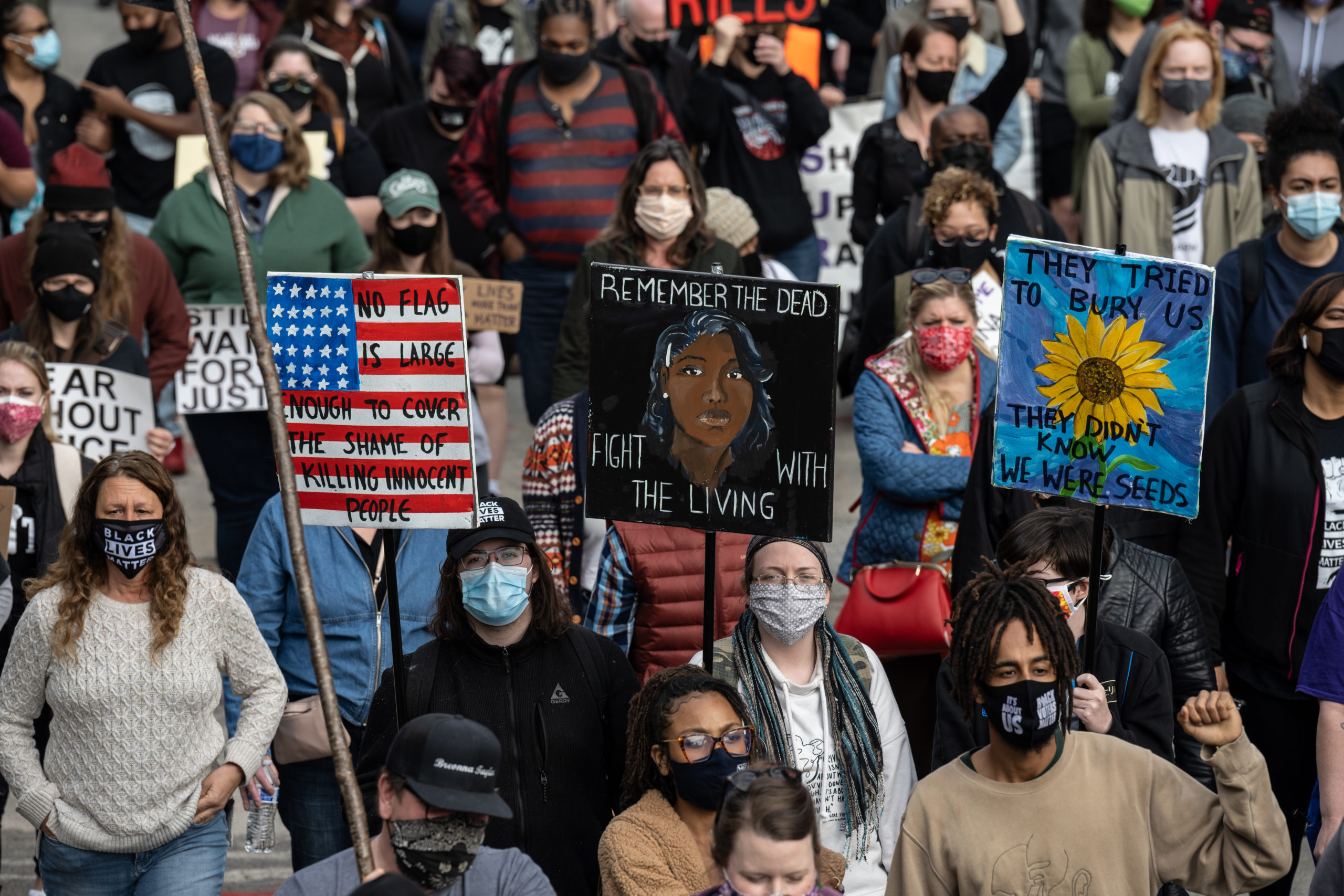 A crowd of protesters and activists on March 13 in Louisville, Kentucky. (Jon Cherry/Getty Images)

How Does It End?

Police departments continue to be open to reform, according to the law enforcement groups. However, they decried the “rush to judgment” that occurs after every deadly use-of-force incident that happens around the country.

“I don’t think we’re ever going to reach perfection, when it comes to something as intricate and complicated as law enforcement,” Mutchler told the DCNF. “There’s always going to be room for improvement.”

“There are going to be cases of misconduct, it’s going to happen, and those have to be handled appropriately,” he added. (RELATED: Activists Are Protesting Police Shooting Of Black Teen Wielding Knife. Here’s What They’re Saying)

But, he also noted that there are 800,000 law enforcement officers in the U.S. and potentially millions of peaceful interactions between police and the public. Only a few interactions get media attention.

He urged people, especially leaders, to dial their rhetoric back and wait for the facts in every instance of potential police misconduct.

“This rush to judgment is foolish. It’s more often wrong than it is right. It’s not how our system of justice works,” Thompson said. “We aren’t supposed to be about mob rule and instantaneous gratification.”

Thompson suggested that elected officials and local leaders need to assure police of their support. If they feel unsupported, officers will continue to quit.