According to the poll Singh leads the three other Republicans who look to take on incumbent Democratic Gov. Phil Murphy.

Singh, an engineer and entrepreneur, led in the poll by just over 2 percentage points with 22.2%, which is within the margin of error. A former member of the New Jersey General Assembly, Jack Ciattarelli, who has a past history of criticizing former President Donald Trump, came in second place with 19.9%.

A former real estate developer who is now a pastor came in third in the poll at 10.2%, 10 percentage points below Singh. The former mayor of Franklin Township, New Jersey Brian Levine polled at 3.2%.

“This poll shows the race is down to two choices — myself, or never-Trump RINO Jack Ciattarelli,” Singh told the Daily Caller. “I am proud to be the only pro-Trump, America-First leader, while Jack Ciattarelli trashes Trump and his supporters.”

“We collected complete survey results from over 1,200 respondents, sampled to be representative of the demographics of the New Jersey likely Gubernatorial GOP Primary voter population. After collection, responses were weighted in accordance with the New Jersey likely GOP Primary voter population to ensure that the results and conclusions drawn are reflective of this group. Respondent quality is ensured with attention screening mechanisms throughout the survey,” Singh added. 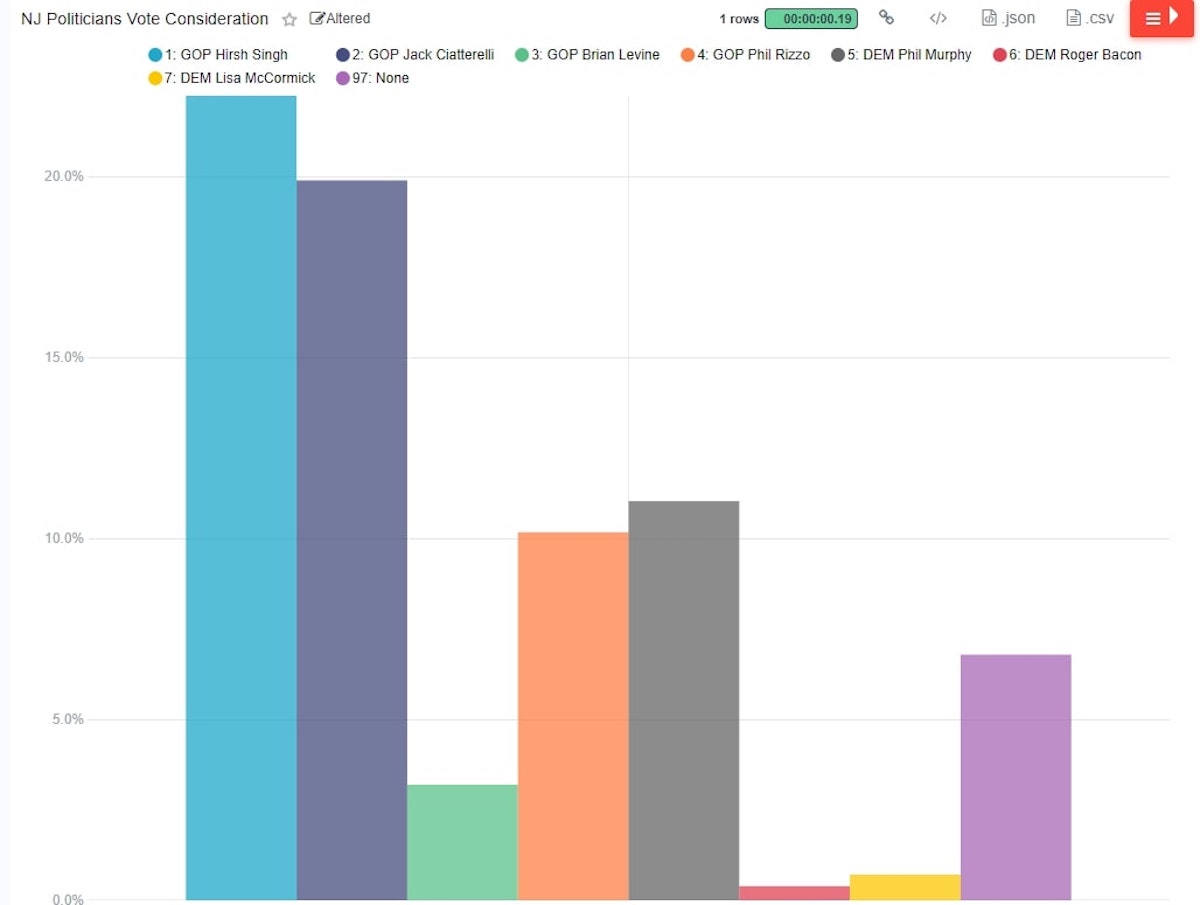 The Republican Party primary will happen on June 8, 2021. The winner will go on to run against Murphy in the state’s gubernatorial election on November 2, 2021. (RELATED: ‘Sanctuary State’ Governor Faces Backlash From Pro-Illegal Immigration Groups Over COVID-19 Relief Benefits)

“The New Jersey GOP Gubernatorial Primary offers some insight into the future direction of the Republican Party. Ciattarelli and his establishment backers are looking to move past Trump and his fervent base of supporters. Meanwhile, Singh and his supporters believe the future of the party goes through former President Trump and the America First movement,” a source familiar with the campaign told the Daily Caller.

A pollster with knowledge of this specific poll told the Daily Caller that the race will come down to undecided voters after reviewing the data.

The poll was conducted by landline and cellphone between April 16-April 21. Over 1,200 likely Republican voters were questioned. The margin of error is plus or minus three percent. (RELATED: Democratic New Jersey Gov. Phil Murphy Praises Trump Administration For Vaccine Development)

The Daily Caller asked Ciattarelli’s campaign about the poll, to which they declined to comment.