“Liz Cheney is a warmongering fool who has no business in Republican Party Leadership. We want leaders who believe in the Make America Great Again movement, and prioritize the values of America First,” Trump said in a statement.

“Elise Stefanik is a far superior choice, and she has my COMPLETE and TOTAL Endorsement for GOP Conference Chair. Elise is a tough and smart communicator!” Trump added.

Cheney, who is up for reelection in 2022, has continued to face criticism for voting in favor of impeaching Trump and continuing to be vocal about her disdain for the former president. The Wyoming Republican Party censured her in February over her vote to impeach Trump.

House Minority Leader Kevin McCarthy trashed Cheney before a Tuesday interview, saying she has real problems and that he has had it with her. 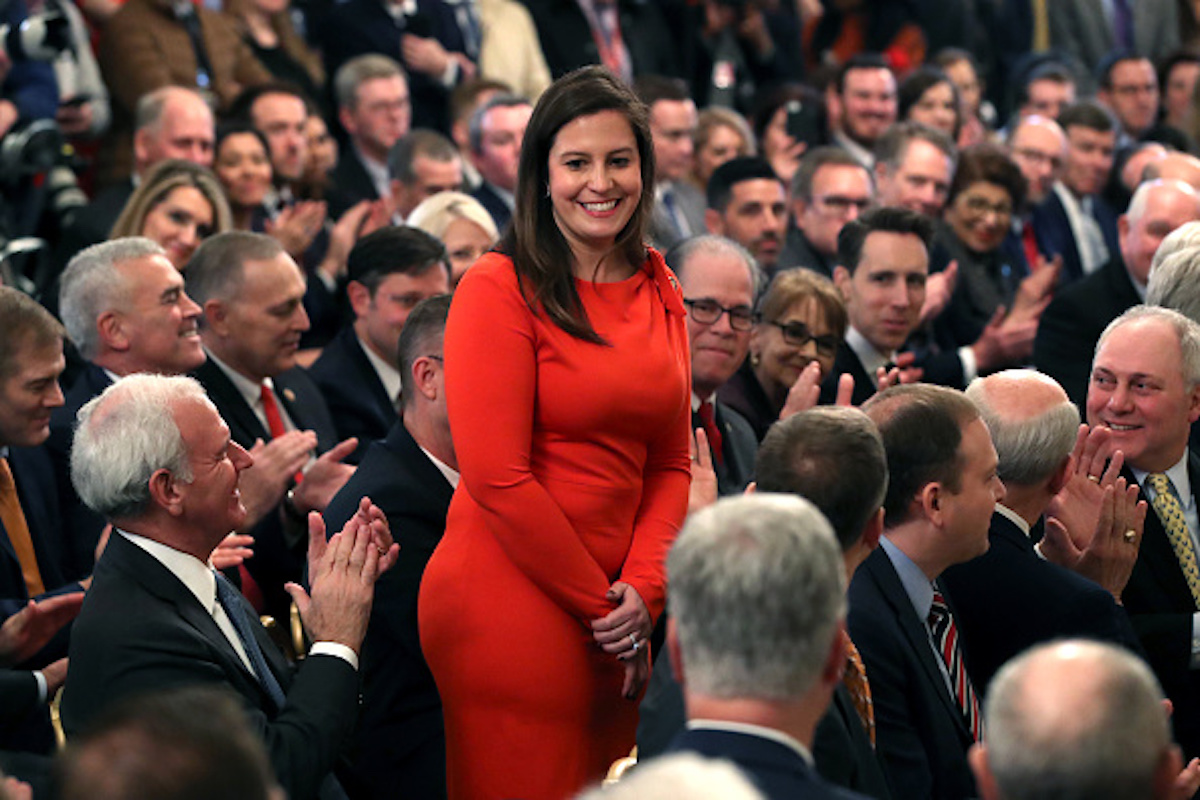 Rep. Elise Stefanik (R-NY) (C) stands as she’s acknowledged by U.S. President Donald Trump as he speaks one day after the U.S. Senate acquitted on two articles of impeachment, in the East Room of the White House February 6, 2020 in Washington, DC. (Photo by Mark Wilson/Getty Images)

McCarthy was caught on a hot microphone before a hit with “Fox & Friends,” where he said Republicans are not concerned about Cheney’s vote to impeach Trump, but said there are concerns about her ability to serve as conference chair. However, McCarthy had some different words about Cheney off-air. (RELATED: Rep. Stefanik Demands Cuomo Be Prosecuted After Report Says His Administration Hid Nursing Home Deaths)

“I think she’s got real problems,” McCarthy told Steve Doocy off-air before the interview, Axios reported. “I’ve had it with … I’ve had it with her. You know, I’ve lost confidence. … Well, someone just has to bring a motion, but I assume that will probably take place.” (RELATED: ‘I Think She’s Got Real Problems’: GOP Leader Kevin McCarthy Caught On Hot Mic Trashing Rep. Liz Cheney)

In late April, McCarthy dodged questions on whether he believes Cheney is a good fit for House leadership at the GOP retreat in Orlando, Florida. (RELATED: Q & A: Congresswoman Elise Stefanik (R-N.Y.)