Microchips are used in just about every modern technology from cars to smartphones. But manufacturers are concerned about a production shortage as supply chains have shifted away from the United States to Asia.

Intel CEO Pat Gelsinger expressed concerns during a 60 Minutes interview Sunday that supply chain disruptions and the rise of Asian chip manufacturing threaten domestic production. He noted that Asia accounts for nearly three-quarters of chip manufacturing while U.S. production has gone down.

“This is a big, critical industry and we want more of it on American soil,” Gelsinger told CBS. “The jobs that we want in America, the control of our long-term technology future, and as we’ve also said, the disruptions in the supply chain.”

“It doesn’t sound good,” he said. “And anybody who looks at supply chain says, ‘That’s a problem.'”

Intel is the largest U.S. chipmaker and produces microchips in advanced manufacturing facilities known as fabrication plants. Chips are made using a thin piece of silicon dioxide called wafers. Silicon is a semiconductor material, which means it can both conduct electrical currents or block them. (RELATED: Biden Admin Targets Seven Tech Companies Charged With Helping China’s Military Develop Supercomputers And WMDs)

Intel has lobbied the federal government for years in an attempt to revive chip manufacturing in the U.S., according to CBS News. Other manufacturing hubs like Taiwan and Israel have bolstered their microchip industries through financial incentives including tax breaks and subsidies.

The COVID-19 pandemic sent microchip demand soaring and domestic manufacturers have been unable to keep up with rising demand, according to Reuters. Manufacturing output declined 2.68% last year because of supply chain disruptions mostly attributed to the pandemic.

TSMC is the world’s most advanced chipmaker and produces chips that are at least 30% faster and more powerful than Intel’s, according to CBS News. TSMC announced in early 2021 that it would invest $100 billion into increasing capacity at its plants over the course of three years. The announcement came days after Intel announced it would spend $20 billion to build two new manufacturing plants in Arizona.

But Intel and other U.S. chipmakers aren’t just competing with Taiwan.

China’s latest five-year economic plan boosts research and development (R&D) for microchips and other “frontier technology,” which could make China more competitive against Intel and TSMC in the future, according to Bloomberg.

The development of microchips is “crucial” to the country’s economic development, China’s science and technology minister Wang Zhigang said at a press conference in February.

China currently imports around $300 billion of chips annually. However, its leaders are starting to promote more domestic manufacturing amid the current global shortage in microchips and an increasingly hostile business relationship with the U.S., according to Bloomberg.

President Joe Biden reportedly plans to keep the Commerce Department rule. Biden has also framed his China strategy as a battle against “techno-autocracies,” according to Bloomberg. 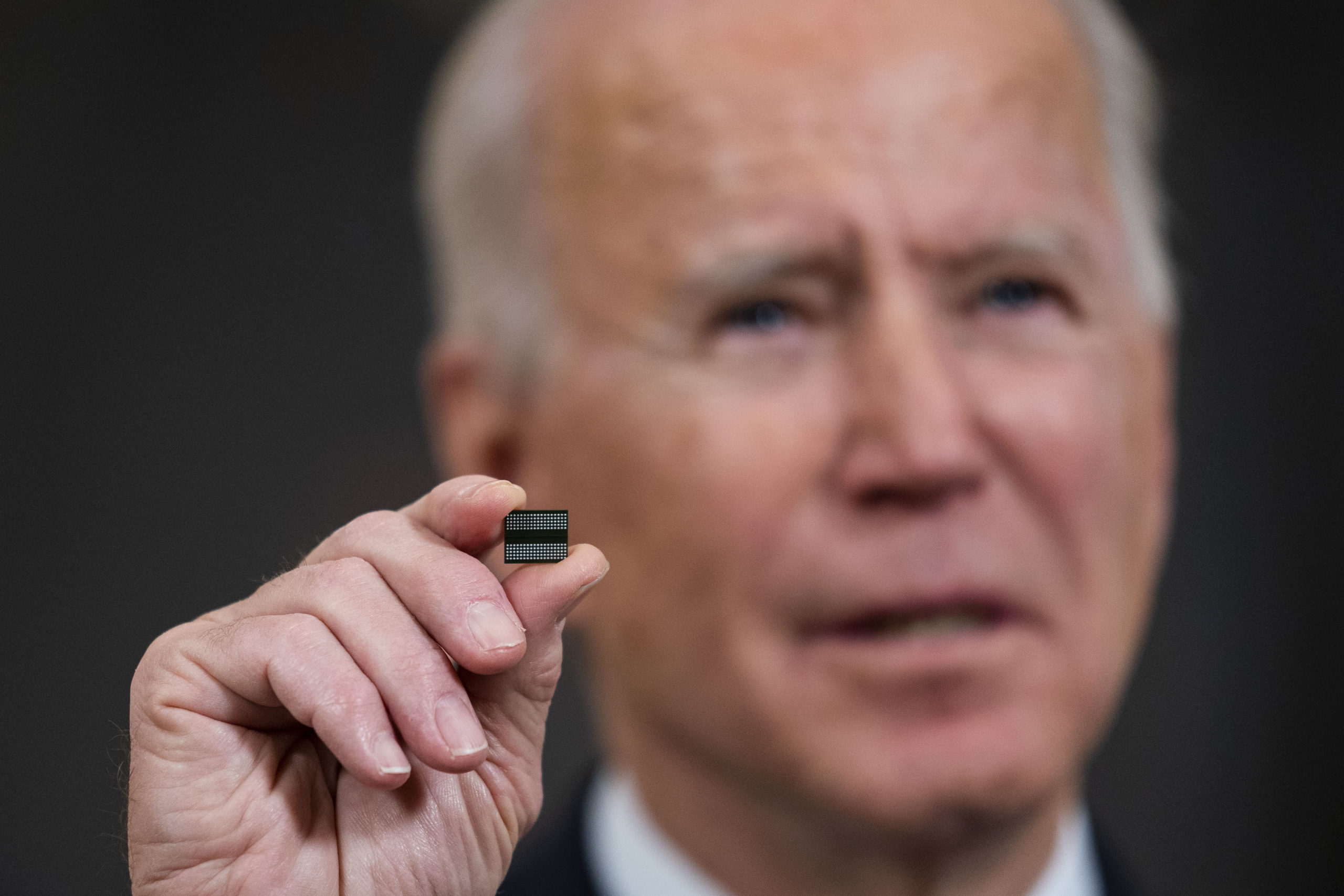 President Joe Biden holds a semiconductor during his remarks at the White House on February 24, 2021 (Doug Mills/Pool/Getty Images)

The White House has said a number of Trump-era actions on China remain “under review,” and the president has faced criticism from some Republicans for his administration’s slow review of specific policies, according to Reuters.

Industry executives at Intel, Qualcomm and other chipmakers wrote a letter to the White House in early February urging the president to push for “substantial funding for incentives for semiconductor manufacturing,” Bloomberg reported.

Biden has since taken executive action aimed at restoring U.S. supply chain security, with an emphasis on semiconductors. He also pushed for $37 billion in funding to boost R&D and chip manufacturing capabilities, Reuters reported.