The upswing of violent crime, including homicides, coincided with the protests, increased anti-police sentiment among Americans and declining morale in police departments, which have since struggled to recruit new officers. The number of murders alone increased by 36.7% in 2020 compared to 2019, according to public information compiled by data analytics reporter Jeff Asher.

“We are definitely at a critical manpower shortage here,” Louisville police union spokesperson Dave Mutchler told the Daily Caller News Foundation last week. “The climate that we all find ourselves in right now is a lot more demanding and stressful on officers.”

“Morale is basically in the toilet,” he continued.

In the wake of the death of George Floyd, who died after former Minneapolis police officer Derek Chauvin kneeled on his neck for about 10 minutes in May 2020, thousands of protests and riots took place across the country. Chauvin was found guilty of second-degree and third-degree murder last month.

Protests, in which demonstrators alleged widespread police brutality, occurred in about 1,700 different U.S. municipalities and cities within the span of just a few weeks in June 2020, USA Today reported. Overall, the protests and riots caused about $1 billion in damage. (RELATED: The War On Police Is In Full Swing. How Does It End?) 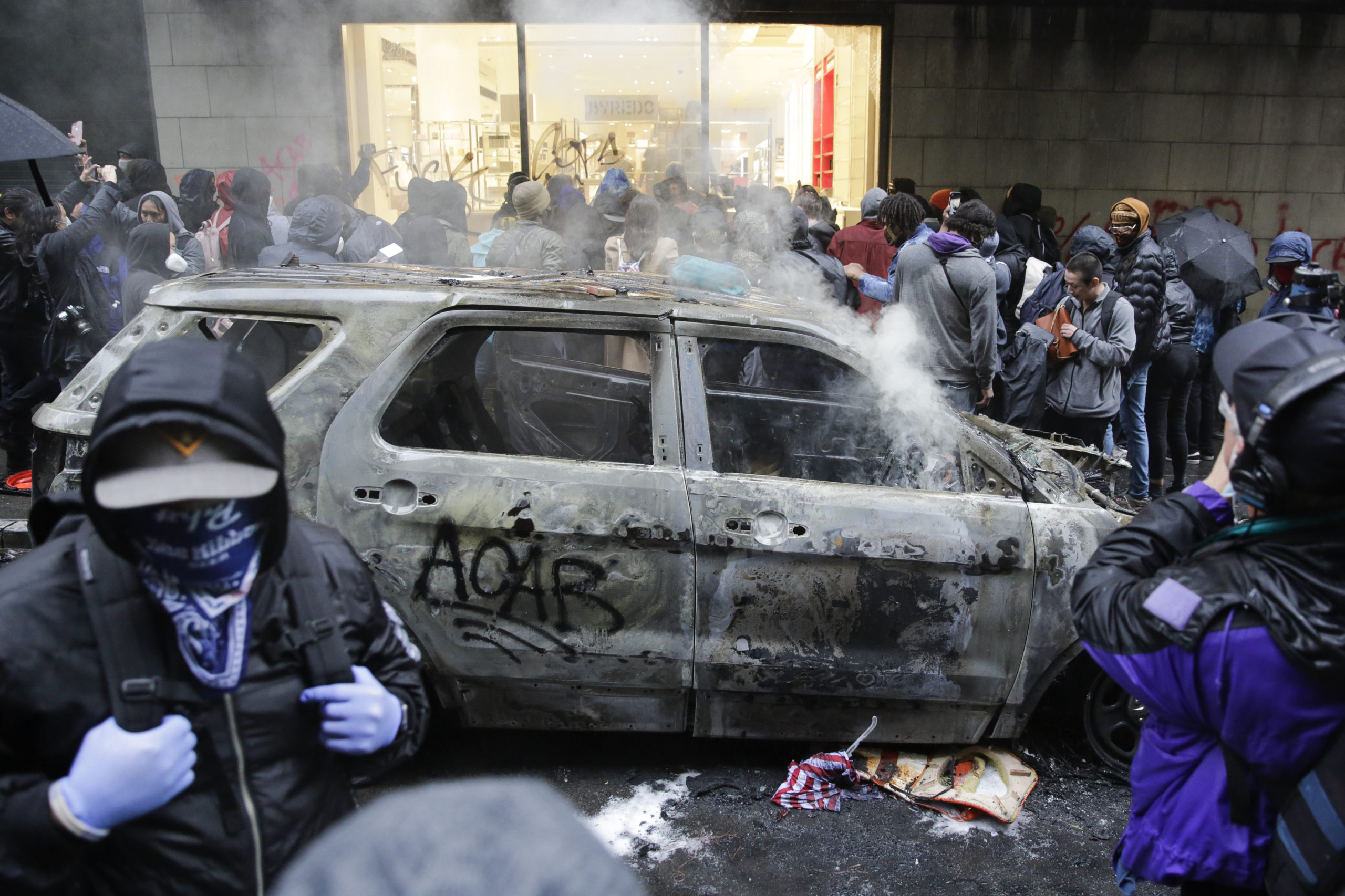 People loot a Nordstrom store near a burned police car in Seattle, Washington on May 30, 2020. (Jason Redmond/AFP via Getty Images)

Violent crime increased 17% in low-income communities and 30% in high-income neighborhoods in Minneapolis, the site of some of the earliest and most violent protests last year, the Star Tribune reported in September. Some neighborhoods experienced as much as 36% more violent crime.

Homicides, assaults, shootings and robberies all ticked up, according to the Star Tribune. Overall, murder in the city increased 72.3% in 2020 compared to 2019, according to Asher.

“‘I can sell drugs here, I can shoot here,’ they carry guns, they don’t care about anything,” Belal Hijazi, an owner of a gas station in Minneapolis, told the Star Tribune.

Hijazi said criminals were emboldened by the lack of police officers.

The Minneapolis city council voted to dismantle its police department in June. The council also approved a measure to cut the police budget.

Between May and August, the New York Police Department reported 791 shootings, or 140% more than the same period in 2019, and 180 murders, a 51% increase compared to 2019, the NYT reported. By August and with four months remaining in the year, the city had already surpassed the number of shootings that occurred every year since 2015. 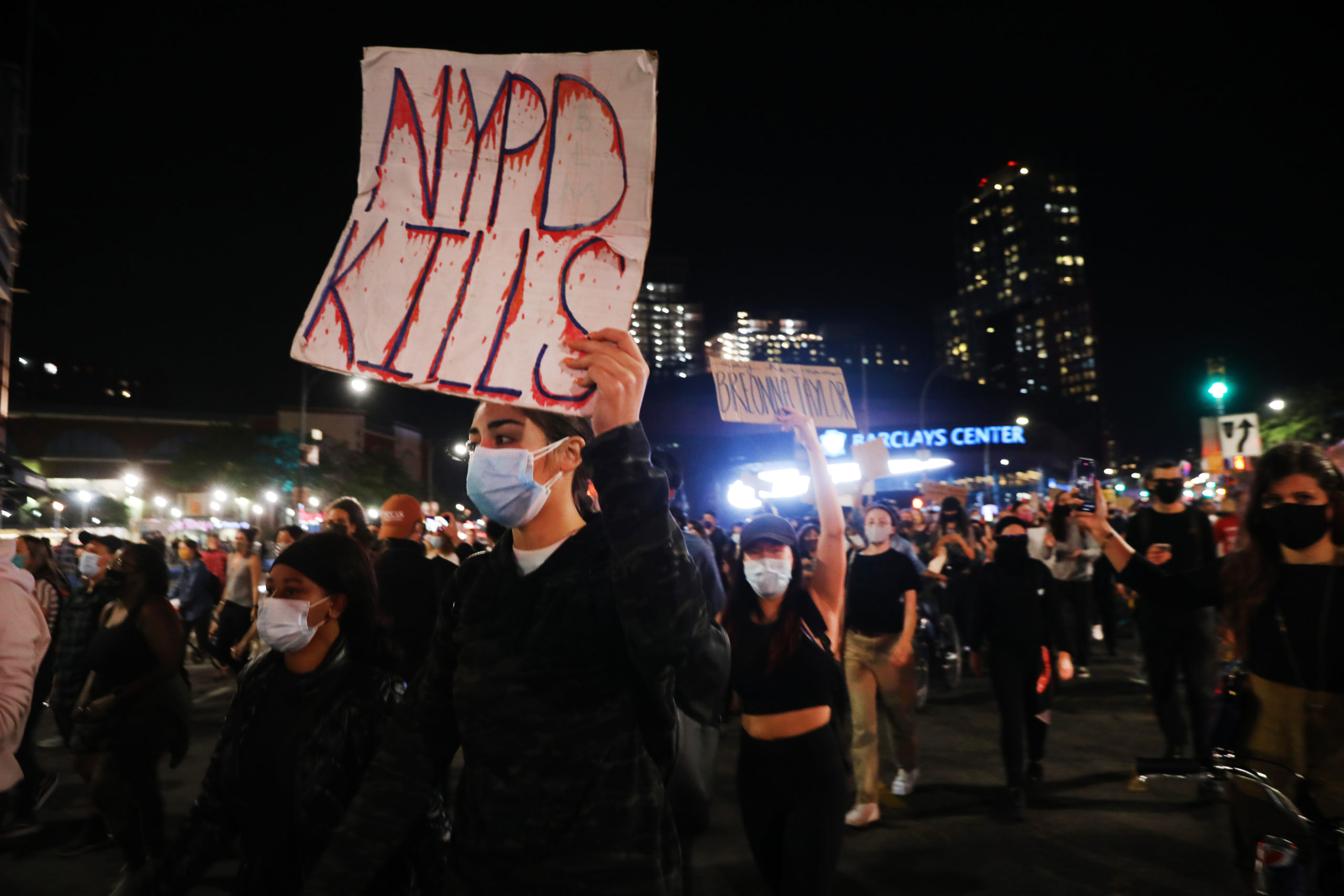 Members of Black Lives Matters are joined by hundreds of others during an evening protest on Sept. 23 in New York City. (Spencer Platt/Getty Images)

But, New York City officials approved a $1 billion cut to the city’s police department on June 30 after dozens of protests and riots. Protesters were filmed setting fires, destroying police cruisers and looting businesses in New York City during one of the riots.

“I took this job after my father did, and I will not let my sons take this job,” New York Sergeants Benevolent Association (SBA) Vice President Vincent Vallelong told the DCNF last summer.

“There’s no respect on the street anymore, which is going to take a lot of time to get back,” he continued.

Chicago reported more than 500 homicides between January 2020 and August 2020, according to WTTW-TV. The number represented a sharp increase compared to 2019, which saw 495 murders through the entire year.

“This has been an unprecedented year in policing, as coronavirus, civil unrest and violence have all converged in Chicago and in cities throughout the country,” Chicago Police Superintendent David Brown said, WTTW reported.

In the first eight months of 2020, shootings increased 52%, the number of shooting victims increased 56% and total homicides increased 49% compared to the same period in 2019, WTTW reported. Chicago concluded 2020 with a 55% total murder increase compared to 2019, according to Asher’s database. 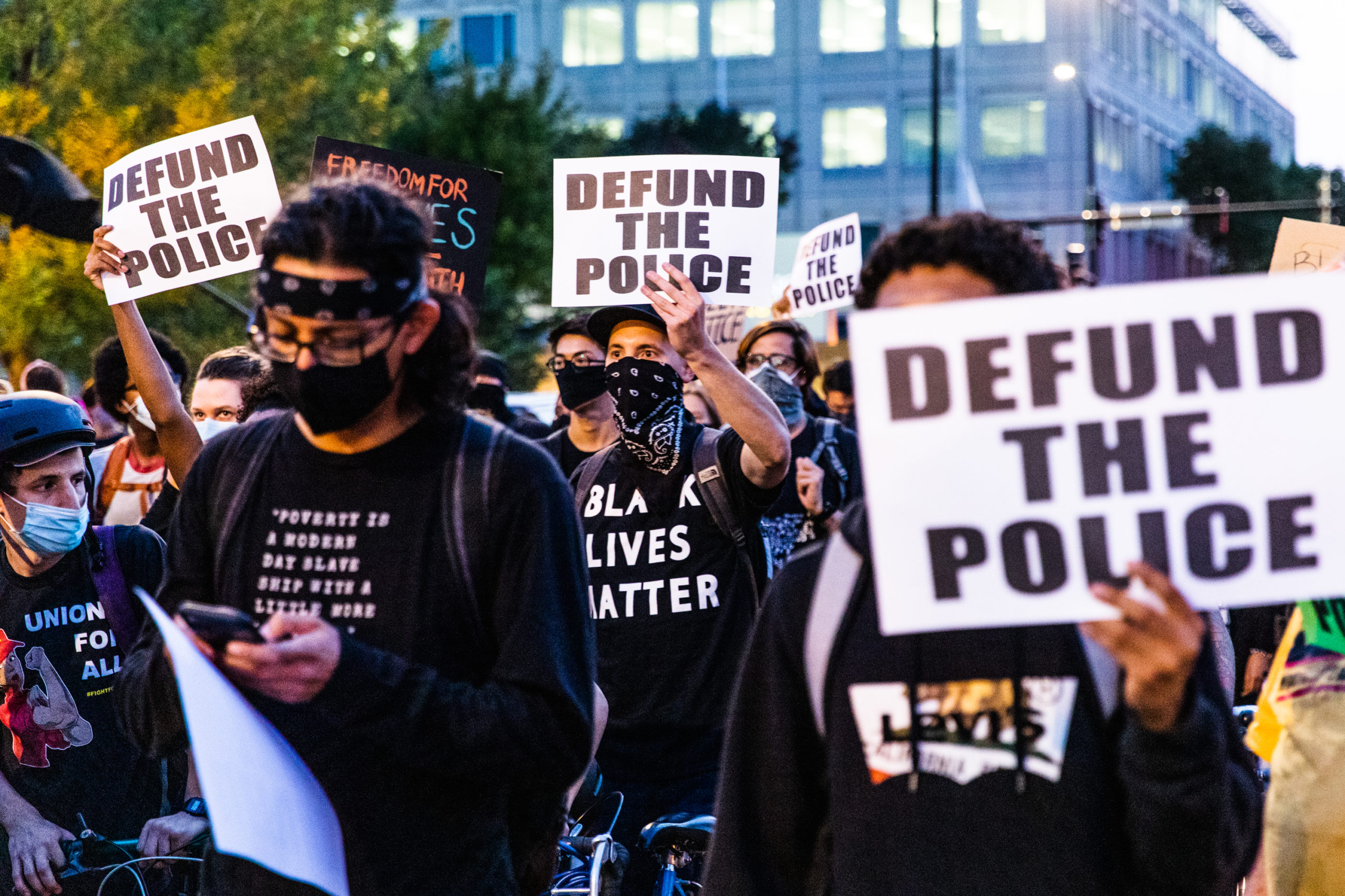 Protesters carry signs in support of defunding the police during a march on Sept. 23 in Chicago, Illinois. (Natasha Moustache/Getty Images)

Meanwhile, after a series of riots and demonstrations, the local Chicago branch of Black Lives Matter warned Mayor Lori Lightfoot in August that violent protests would continue unless substantive changes were made, the Chicago Tribune reported. The group downplayed the destruction of businesses “owned by the wealthy.”

“The mayor clearly has not learned anything since May, and she would be wise to understand that the people will keep rising up until the [Chicago Police Department] is abolished and our Black communities are fully invested in,” the group said, according to the Chicago Tribune.

During one protest, hundreds of looters and rioters were seen setting fires and breaking into storefronts. (RELATED: Police Departments Say Budget Cuts Are The Reason They’ve Been Unable To Hire New Officers)

Lightfoot asked the Chicago city council to cut nearly $60 million from the police budget in October, according to CBS Chicago.

In December, Washington, D.C., reached 187 homicides, the highest number of murders in the city since 2005, according to the Washingtonian. Homicides, assault from a dangerous weapon and motor vehicle theft all increased.

Murders increased 19.4% overall in 2020 compared to 2019, according to Asher’s database. Former Metropolitan Police Department Chief Peter Newsham blamed the increase in crime to “repeat violent gun offenders being released back into our community,” the Washingtonian reported. 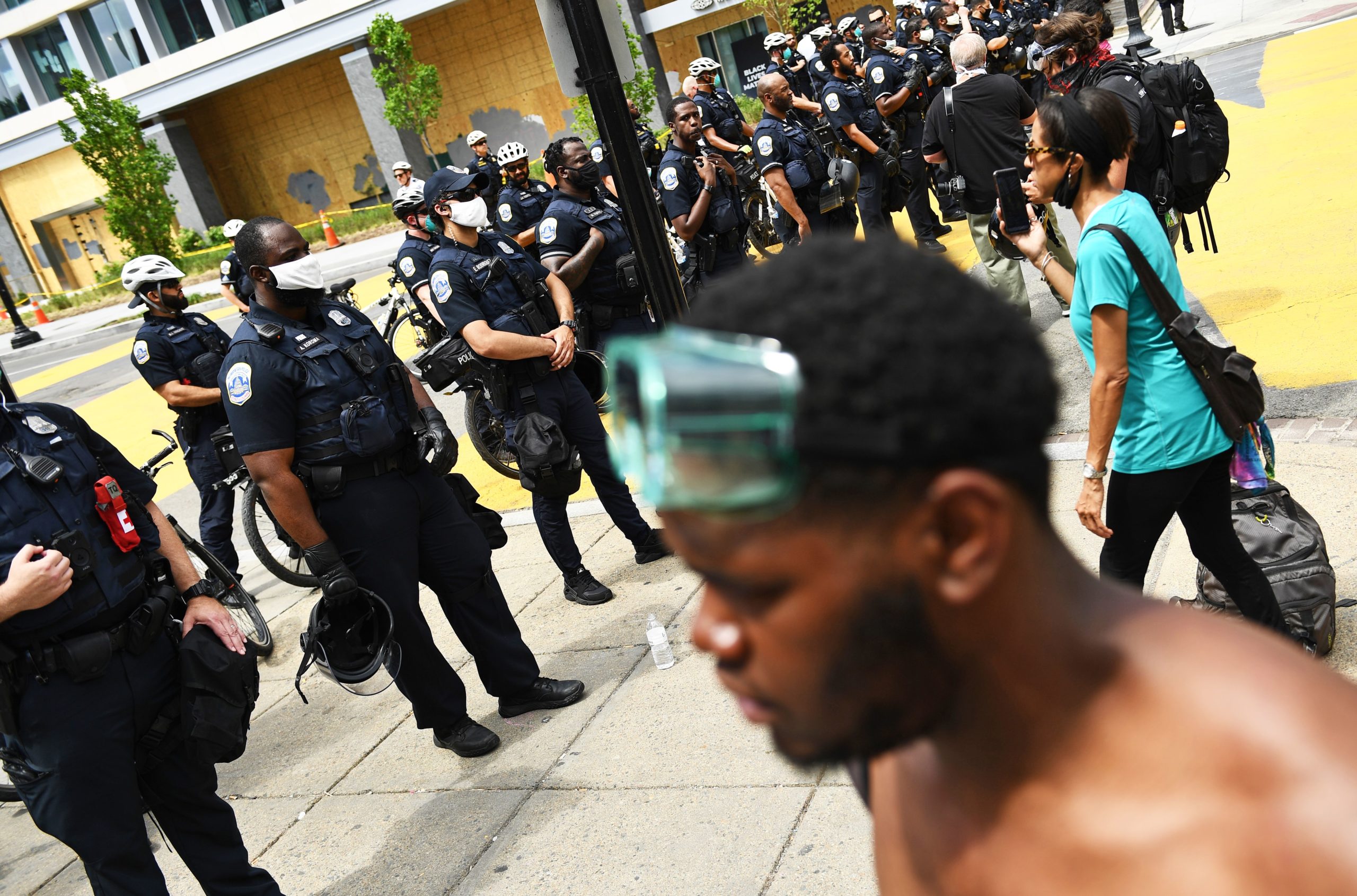 Protesters face a line of police officers in riot gear as they form a security perimeter in Washington, D.C. on June 23. (Brendan Smialowski/AFP via Getty Images)

In one June protest, tens of thousands gathered to demand greater police accountability, according to the Associated Press. The protest, in which police reported multiple fires and mass looting, required thousands of national guardsmen to help enforce a strict curfew that was ordered by city officials.

Last year was Atlanta’s deadliest year in more than two decades, according to The Atlanta Journal-Constitution. The city reported 150 murders in 2020, a whopping 58% increase compared to 2019.

“It’s ridiculous that now, even during this pandemic, we got more gun violence going on than ever before,” local activist Columbus Ward told the AJC. (RELATED: ‘Abolish ICE!’: Protesters Crash Biden’s Georgia Rally)

Atlanta experienced multiple protests throughout the summer last year, many of which led to mass violence, according to U.S. News and World Report. In some cases, protests left burned police cars and looted businesses in their wake.

Mayor Keisha Lance Bottoms characterized one May 2020 protest as “chaos.” During the demonstration, people were seen looting and setting fires as they called for police reform.

“In 2021, we cannot have a repeat of what’s going on this year,” Atlanta City Council President Felicia Moore said, according to the AJC. “And that’s going to mean addressing police accountability, but that’s also going to mean we have to support the police.”

In June, Lance Bottoms promised that the city would continue to reallocate funds from police to “social services and community enhancement initiatives,” which she said the city had been doing for years, according to Reporter Newspapers.