The bill’s advance followed a marathon markup session led by Minnesota Sen. Amy Klobuchar that featured dozens of amendments offered by both Democrats and Republicans. Unlike most legislative markups, Senate Majority Leader Chuck Schumer and Minority Leader Mitch McConnell also testified for and against the bill, respectively.

Though the legislation, formally known as the For the People Act, was not technically reported out of committee since the vote was tied 9-9 along party lines, Schumer still has the power to bring it to the Senate floor for a four-hour debate under Senate rules.

Ahead of the amendments offered, Schumer said that the bill was needed to safeguard against an array of election reform bills that Republicans have passed in multiple states across the country.

“In the wake of the 2020 elections, deemed the most secure in American history of the previous administration, former President Trump told a lie, a big lie, that the election was stolen,” Schumer said. “In states across the country, Republican legislatures seized on the big lie to restrict the franchise.”

“They are reprehensible in my judgement … and they carry the stench of oppression,” Schumer added, warning Republicans to “think twice” about their opposition to Democrats’ bill and support of election bills seen in numerous states.

McConnell, however, alleged Democrats of launching “hysterical attacks,” and labeled S.1 as a partisan power grab that would let “Washington Democrats dictate the terms of their own reelection races” and “neuter” popular security measures like voter ID.

“Our democracy is not in crisis,” McConnell said while rebutting Schumer. “This is a partisan effort to over how you conduct elections in our country.” (RELATED: House Democrats Pass The For The People Act Without Any GOP Votes) 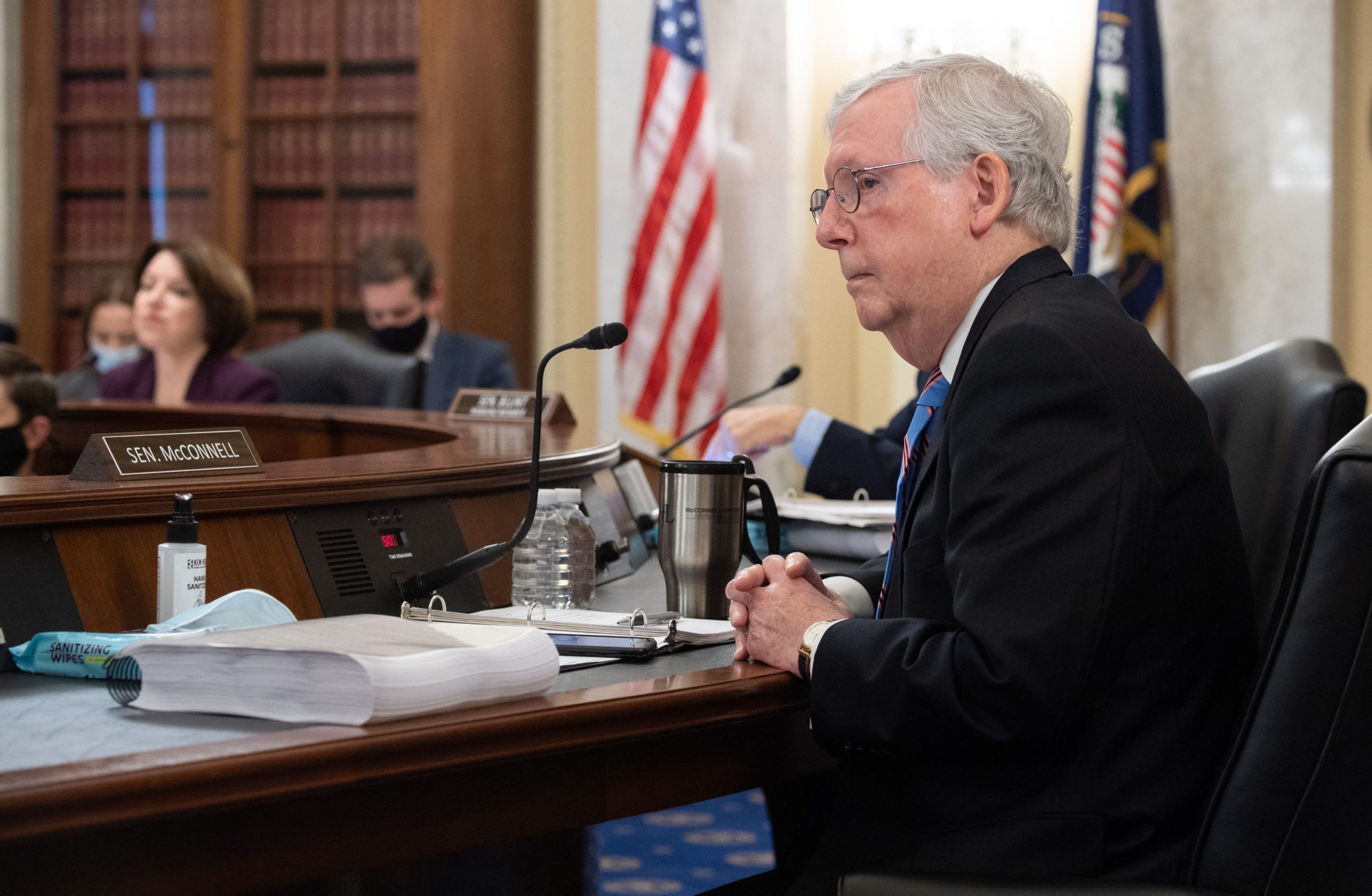 Senate Minority Leader Mitch McConnell spoke against S.1, amounting it to a “partisan effort” to take over elections. (Saul Loeb/AFP via Getty Images)

While the bill passed on a party-line vote, multiple amendments failed on the same lines since under committee rules they needed majority support for adoption.

The first, a manager’s amendment that Klobuchar introduced, was a comprehensive proposal that revised several controversial components of the House’s version of the bill. Some alterations included making early voting the day before Election Day optional instead of mandatory and allowing more leeway to smaller municipalities that would otherwise struggle to hold consecutive early voting days.

It failed on party lines, though some aspects were reintroduced as individual amendments later in the hearing.

The second amendment, introduced by Missouri Sen. Roy Blunt, the committee’s ranking member, sought to scrap a provision that would allow the federal government to match small-dollar donations to political campaigns at a 6-1 ratio if the candidates chose to accept it. While Democrats argued that the provision would grant a greater voice to Americans unable to cut large checks to campaigns, Republicans said that the government had no business giving to politicians in nearly every state, and the amendment failed along party lines as well.

One amendment that passed 13-5 was introduced by Virginia Democratic Sen. Mark Warner. His amendment would create a report examining how vote-by-mail expansions would affect the ability for active-duty servicemembers to vote by mail and have their ballots tabulated.

Another, introduced by Maine Independent Sen. Angus King, would authorize the Cybersecurity and Infrastructure Security Agency to issue guidelines and updates to state and local election officials to better prevent against election threats. That amendment passed 10-8. (RELATED: House Passes Legislation That Enables The DOJ To Demand The Removal Of Social Media Posts Deemed Disinformation)

An amendment brought by Texas Republican Sen. Ted Cruz prevented people’s religion from being considered when forming redistricting commissions, and it passed by voice vote. 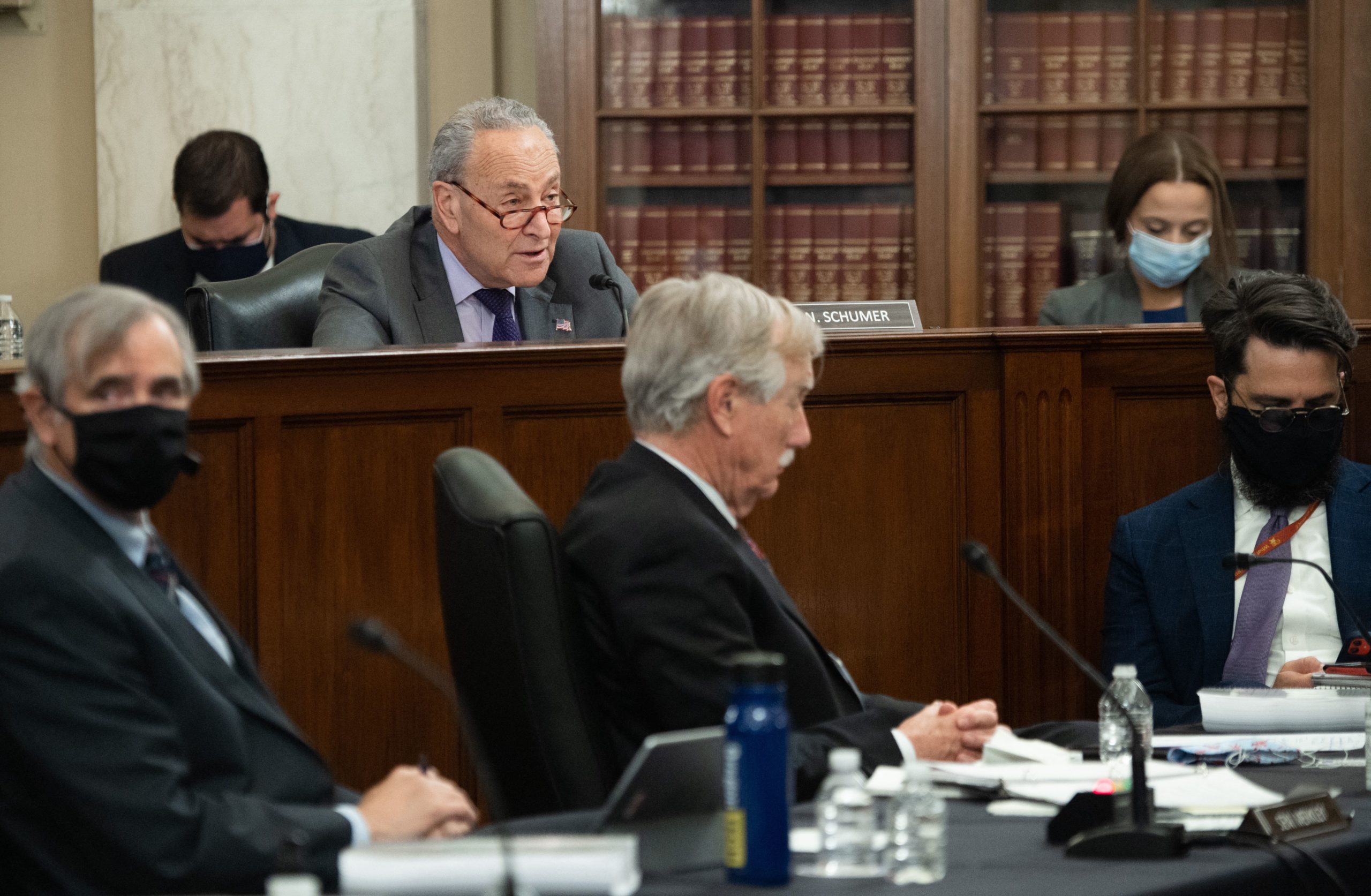 Some of the provisions in the Democrats’ bill have wide support. A Pew Research poll from April found that 61% of Americans supported automatic voter registration for eligible voters and that 78% supported at least two weeks of early, in-person voting ahead of election day.

The House passed H.R. 1 in the previous Congress, but it stalled in the Republican-controlled Senate. Schumer has vowed to bring the bill up for a vote this time around, but it does not currently have the support to pass.

With only 50 Democratic senators, 10 Republicans would need to vote in favor for the bill to overcome the Senate’s 60-vote threshold, and GOP members remain unanimously opposed to the bill.