Rocket alert sirens wailed across Central and Western Israel as Palestinian terrorist groups fired a massive barrage of rockets towards Israel from the Gaza Strip on Tuesday night.

The most recent barrage has targetted most of Israel’s west coast, according to data from the Israeli rocket warning system Red Alerts – Cumta.

A video released by the Israel Defense Forces shows one among several Israeli Iron Dome batteries working overtime to prevent missiles from raining down on civilians, homes and cities.

RAW FOOTAGE: This is the moment the Iron Dome intercepted a barrage of rockets over Tel Aviv and central Israel. pic.twitter.com/8jl8OTgWCl

The Iron Dome has been engaged in several areas of Israel.

JUST IN – Iron Dome lights up the sky in Israel as a massive rocket barrage is being intercepted.pic.twitter.com/Obrcn18LlZ

Another video of continious Iron Dome launches and interceptions. pic.twitter.com/jE0aIfZwv5

The recent barrage has also targeted areas near Israel’s primary and largest international airport in Tel Aviv – Ben Gurion Airport. Flights heading to Israel were directed to Greece and Cyprus, according to Greek City Times.

Air traffic in and outside Israel has reportedly been suspended.

Medics in Holon, Israel, which was hit by some rockets bypassing the Iron Dome, were forced to stop and take cover when sirens rang again just as they were heading to help injured civilians, according to Times of Israel.

“As we got close to the scene, we saw a bus and number of cars on fire. A woman in her 30s was lying on the ground, not moving. She was fully conscious and sustained shrapnel wounds to her upper body. We began treating her, giving her life-saving care, when another siren began,” Israeli medic Regina Mizrahi told the outlet.

“We immediately ran with the patient, who was in a stretcher, to a safe place under a building. Once the sirens ended and we could leave, we returned to the road, put her in the ambulance and took her to the hospital in stable condition,” Mizrahi added.

Tel Aviv’s suburbs of Holon and Givatayim and the city of Rishon le Zion are among those areas hit by the rocket barrage, according to reporting from the Times and the Jerusalem Post.

Israel has experienced more than 26 hours of constant rocket fire from Gaza since terror groups based in the territory. They began firing indiscriminate rockets at 6:00 p.m. local time (11:00 a.m. Eastern) on Monday, according to data from Cumta. Around 700 rockets have been fired from Gaza during this time, the Post reported. (RELATED: Parts Of Southern Israel Go Into Lockdown, Israel Recruits Reserve Army, As Hamas Sends A Hail Of 300 Rockets)

According to the Post, Rishon Lezion saw one woman killed and another individual injured. In Holon, four people were injured, along with the driver of a bus struck by a rocket. In Holon, three people are in “moderate condition,” including a 5-year-old child, the outlet reported. 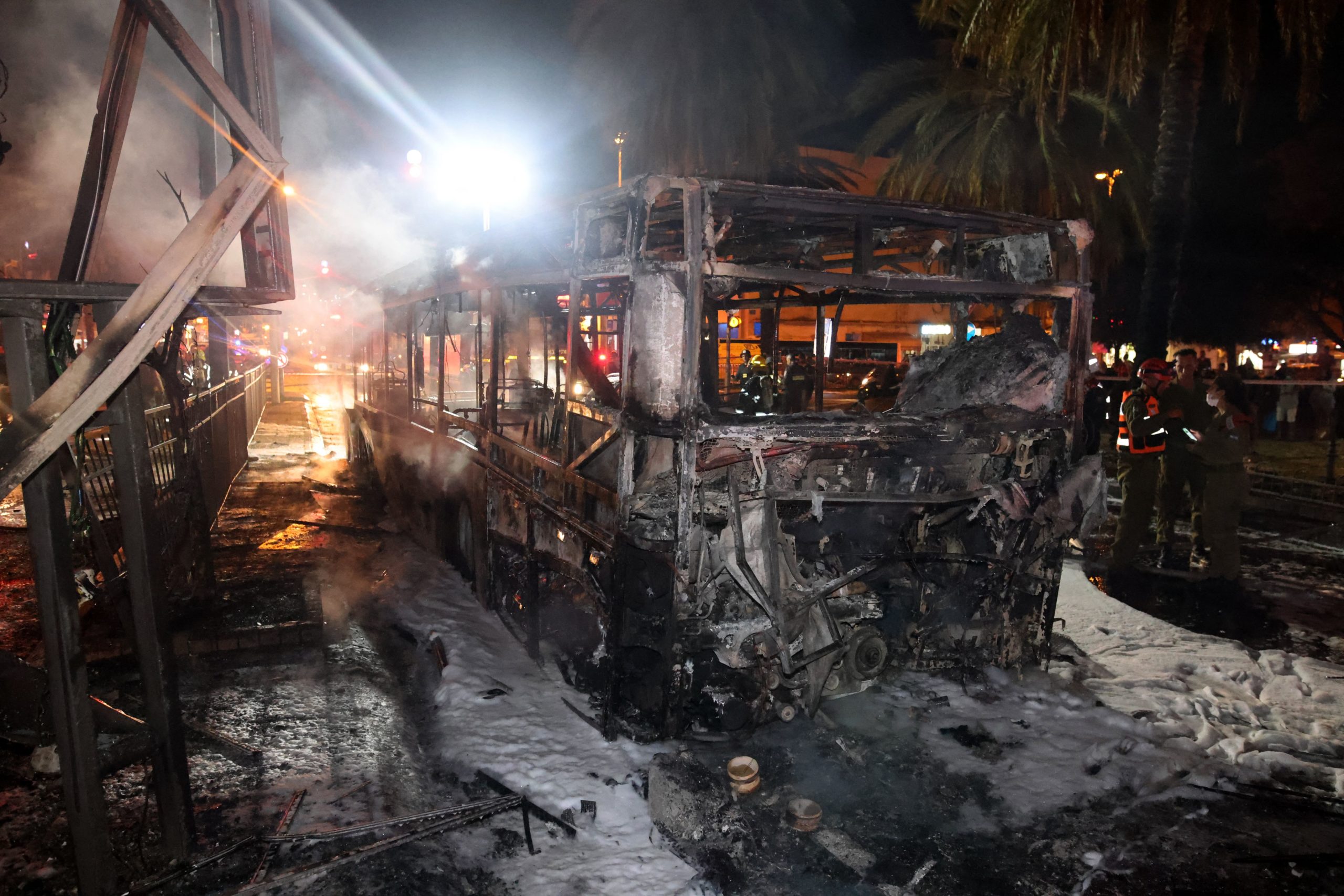 Israeli firefighters check out damages in the Israeli town of Holon near Tel Aviv, on May 11, 2021, after rockets are launched towards Israel from the Gaza Strip controlled by the Palestinian Hamas movement. (Photo by AHMAD GHARABLI/AFP via Getty Images)

Palestinian terrorist groups Hamas and the Palestine Islamic Jihad have claimed responsibility for the recent onslaught of rockets on their official Telegram channels. The attacks follow multiple Israeli retaliatory airstrikes on Gaza in response to previous rounds of rocket fire.

Many of the missiles fired into Israel have been prevented from striking their intended targets thanks to Israel’s Iron Dome.

The Iron Dome is a missile-defense system that “detects, assesses and intercepts a variety of shorter-range targets such as rockets, artillery and mortars,” that approach cities and communities in Israel and sends missiles to intercept the incoming projectiles from “from ranges of 4-70 km,” according to defense manufacturer Raytheon Missiles & Defense.

Israel first deployed the system in 2011 after multiple terror groups attacked Israel since the 1990s using rockets, Wall Street Journal reported. To date, it has intercepted more than “1,500 incoming targets with a success rate exceeding 90 percent,” according to Raytheon.