Companies like McDonald’s and Coca-Cola have become vocal supporters of the Black Lives Matter movement over the past few years, claiming that they stand against racial injustice and police violence.

While these companies engage in corporate activism to score points with woke activists, they conveniently ignore the fact that they target minority populations in marketing ads and profit off selling them products that are statistically more dangerous to black lives than encounters with police officers.

McDonald’s President Joe Erlinger issued a statement in May 2020 expressing support for racial justice after the death of George Floyd.

“In the past as a company, we tended to stay silent on issues that don’t directly involve our business. But since stepping into this role, I have assured you that I would communicate openly and transparently because I believe that it is critical to address issues that are affecting us all,” he wrote on LinkedIn. (RELATED: ANALYSIS: How Big Corporations Bought The Social Justice Movement)

“Quite simply, I am appalled by recent events in Louisville, Georgia, New York, and Minneapolis … Over the next several weeks, McDonald’s will provide several opportunities to discuss these issues and our commitment to diversity and inclusion,” he continued.

The company then aired an ad in June 2020 that listed names like Trayvon Martin, Michael Brown, Ahmaud Arbery and George Floyd.

“We do not tolerate inequity, injustice, or racism. Black lives matter,” the ad said.

McDonald’s announced April 14 that it would introduce anti-discrimination training at all of its restaurants after 52 former franchisees filed a $1 billion lawsuit alleging that McDonald’s engaged in decades-long discrimination against black franchisees.

The training is “aimed at furthering a culture of physical and psychological safety for employees and customers through the prevention of violence, harassment, and discrimination,” McDonald’s said in a statement. 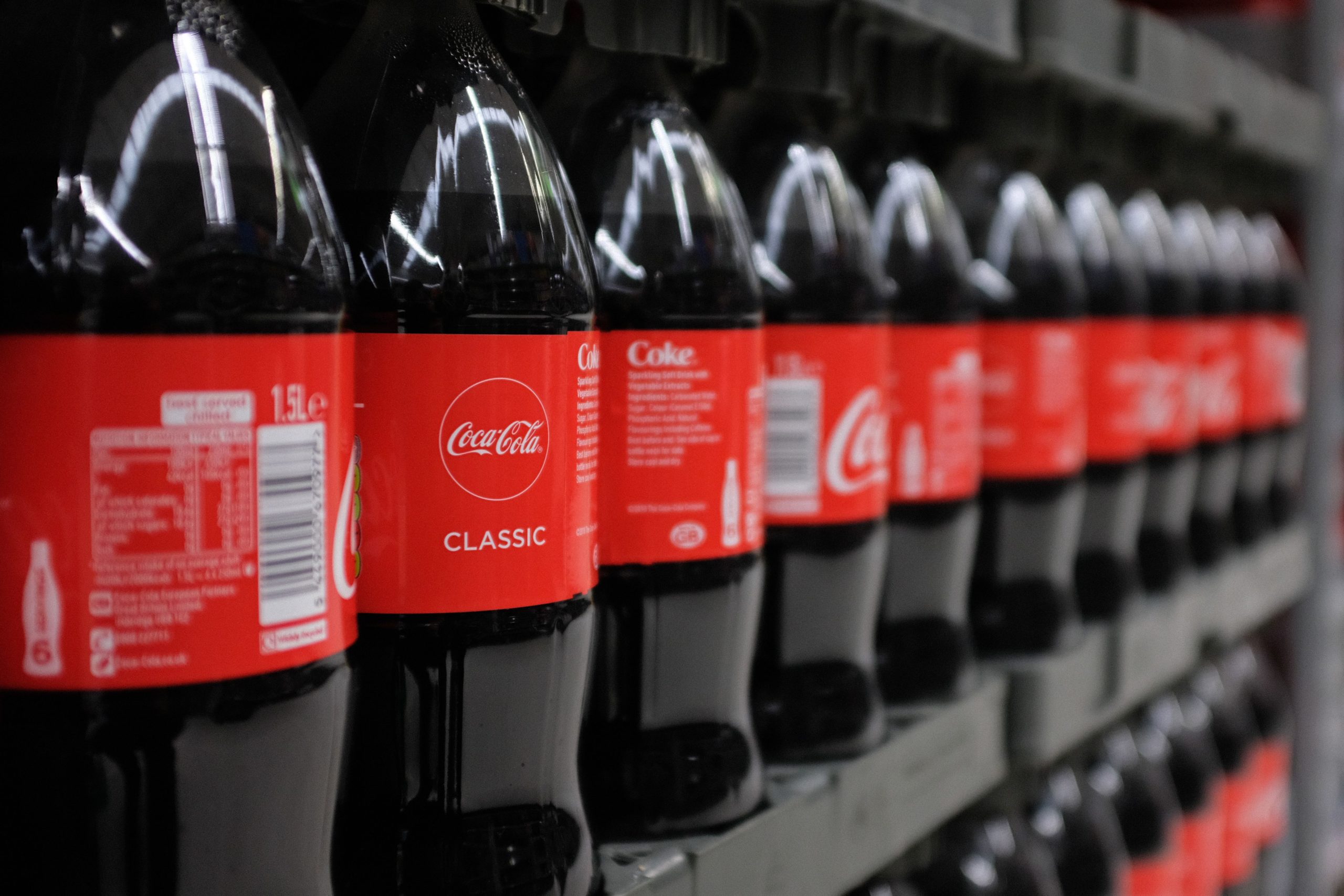 Bottles of Coca-Cola are pictured at a branch of Asda in north London, on April 27, 2018. (DANIEL LEAL-OLIVAS/AFP via Getty Images)

“I, like you, am outraged, sad, frustrated, angry. Companies like ours must speak up as allies to the Black Lives Matter movement. We stand with those seeking justice and equality.”

Coca Cola announced that it would create a “Racial Equity Action Plan” to explore diversity and inclusion within the company.

Sprite, which is owned by the Coca-Cola Company, donated $500,000 to the Black Lives Matter Global Network, according to a statement. (RELATED: Here’s A List Of Corporations Funding The ‘Defund The Police’ Movement)

Quincey also denounced Georgia’s voting law, which some activists have claimed is racist.

While these companies have only recently begun airing ads and statements advocating for racial justice, they have been targeting minorities with advertisements for decades.

Fast food and junk food companies began targeting black Americans in the 1970s to expand their consumer base. McDonald’s aired ads aimed at the demographic called “Makin’ it” and “Dinnertimin,’” purposefully dropping the “g,” according to The Atlantic. These ads used lines like “On the real, kids can really dig gettin’ down with McDonald’s” while ads intended for white audiences left them out.

Burger King took a similar route, using lines like “Have mercy!!” in its “Have It Your Way” ads.

In the 1970s, Jell-O became one of the first brands to recruit a black spokesperson — Bill Cosby.

Even today, black and Hispanic celebrities are more likely to appear in commercials for fast food and unhealthy foods, Aarti Ivanic, an associate professor of marketing at the University of San Diego’s School of Business, told Vox in an interview.

Blacks and Hispanics experience the highest rates of obesity in the United States, 49.6% and 44.8% respectively, according to the Centers for Disease Control and Prevention (CDC). Ivanic contended that how food is marketed to different groups has an effect on the obesity rate. (RELATED: Put The Burger Down America, The Secret To Our Covid-19 Crisis Is That You’re Too Fat)

“When you look at commercials for junk food, McDonald’s, soda, chips, you see more African Americans than Caucasians. Caucasians are targeted in ads like for Vita water, for example, but you’ll see more of the [junk food] ads on BET or on radio stations aimed toward a [lower-income] demographic. Whether that’s conscious or not, the research shows it intersects,” Ivanic said.

“Psychologically, we tend to associate with people who look like us. So if you’ve got these ads for unhealthy foods marketed toward a particular group, and you’re African American, you begin to think it’s normal for African Americans to eat unhealthy foods. Obesity now spans across races, but minorities are more overweight and obese,” Ivanic continued.

The amount of money used to specifically target black and Hispanic kids has increased in recent years, according to NBC News. While ad spending for food, drinks and restaurants decreased by about 4% from 2013 to 2017, spending targeted to attracting black teens increased from $217 million to $333 million over the same time period. Eighty percent of the over $11 billion spent by food companies on advertising went to programs showcasing fast food, candy and sugary drinks.

Several of the leading causes of death for black Americans are tied to obesity and unhealthy food habits promoted by companies like McDonald’s and Coca-Cola. 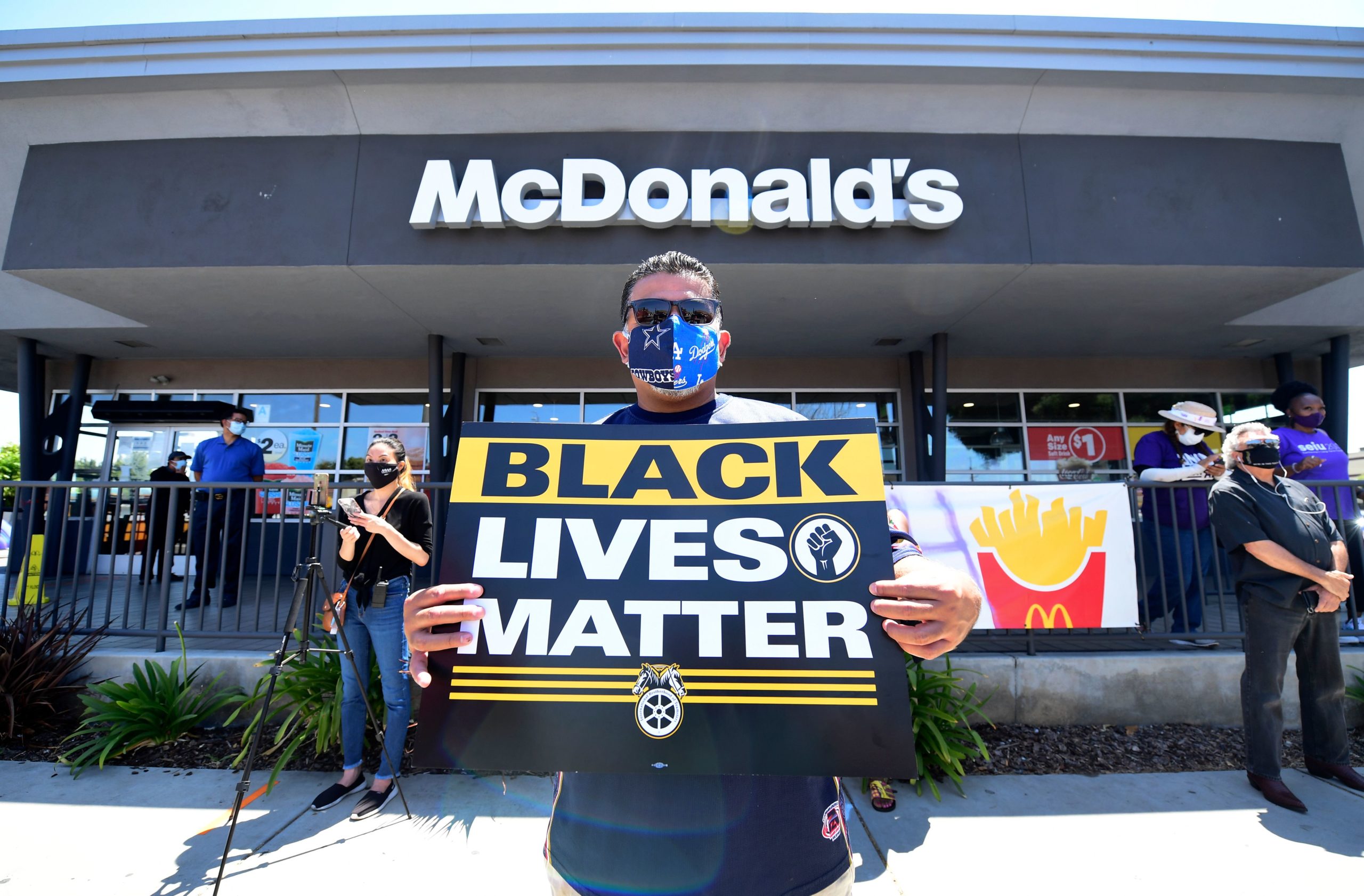 Activists protest in front of a McDonalds in Los Angeles, California, on July 20, 2020 during a Strike For Black Lives rally. (Photo by FREDERIC J. BROWN/AFP via Getty Images)

The overconsumption of fast food like McDonald’s and sugary drinks like Coca Cola is a major contributing factor to heart disease, diabetes, hypertension and stroke.

Eating salt-rich fast foods increases the risk of hypertension, and a study from the National Institute of Health suggested that the risk of stroke in an average neighborhood increased by as much as one percent for every fast food restaurant in the area.

Almost 350,000 black people died in 2019, according to the CDC. Data shows 251 black people were shot and killed by police, according to The Washington Post. That means only about 0.07% of all black deaths in 2019 were caused by officer-involved shootings. Meanwhile, heart disease, the leading cause of death for black people, caused around 23% of deaths.

Despite claims that they support “Black Lives Matter,” companies like McDonald’s and the Coca-Cola Company create products that contribute to health problems that cause far more black deaths than police encounters. On top of that, these companies have a long history of specifically targeting minorities to get them to buy these unhealthy products.

So, while these companies claim that they stand alongside Black Lives Matter in the fight against deadly police violence, they are profiting off the unhealthy eating habits that are killing thousands of black people every year.