Abortion advocates and Democrats reacted with anger and fear to news that the Supreme Court would review a case directly challenging aspects of Roe v. Wade, warning that “reproductive rights are in danger.”

The court announced Monday that it will hear Dobbs vs. Jackson Women’s Health Organization beginning in October, and a decision on the case will likely come by June 2022, CNBC reported. This will be the first major abortion case in which all three of former President Donald Trump’s Supreme Court justice appointees participate, including Justice Amy Coney Barrett, who gained a seat on the court after a contentious confirmation process in October.

Pro-abortion advocates and commentators were quick to warn that the case could have a tremendous impact on Roe v. Wade, and to predict that Justices Barrett and Brett Kavanaugh would fight to overturn the landmark ruling. (RELATED: Here’s A Timeline Of The 2018 Kavanaugh Confirmation)

“Never forget that [Senate Minority Leader Mitch] McConnell and others mocked us and gaslit us through the Kavanaugh fight for claiming that legal abortion was in jeopardy,” tweeted National Abortion and Reproductive Rights Action League (NARAL) President Ilyse Hogue. “They knew. They lied. We knew. We fought. And we’re so far from done fighting.” 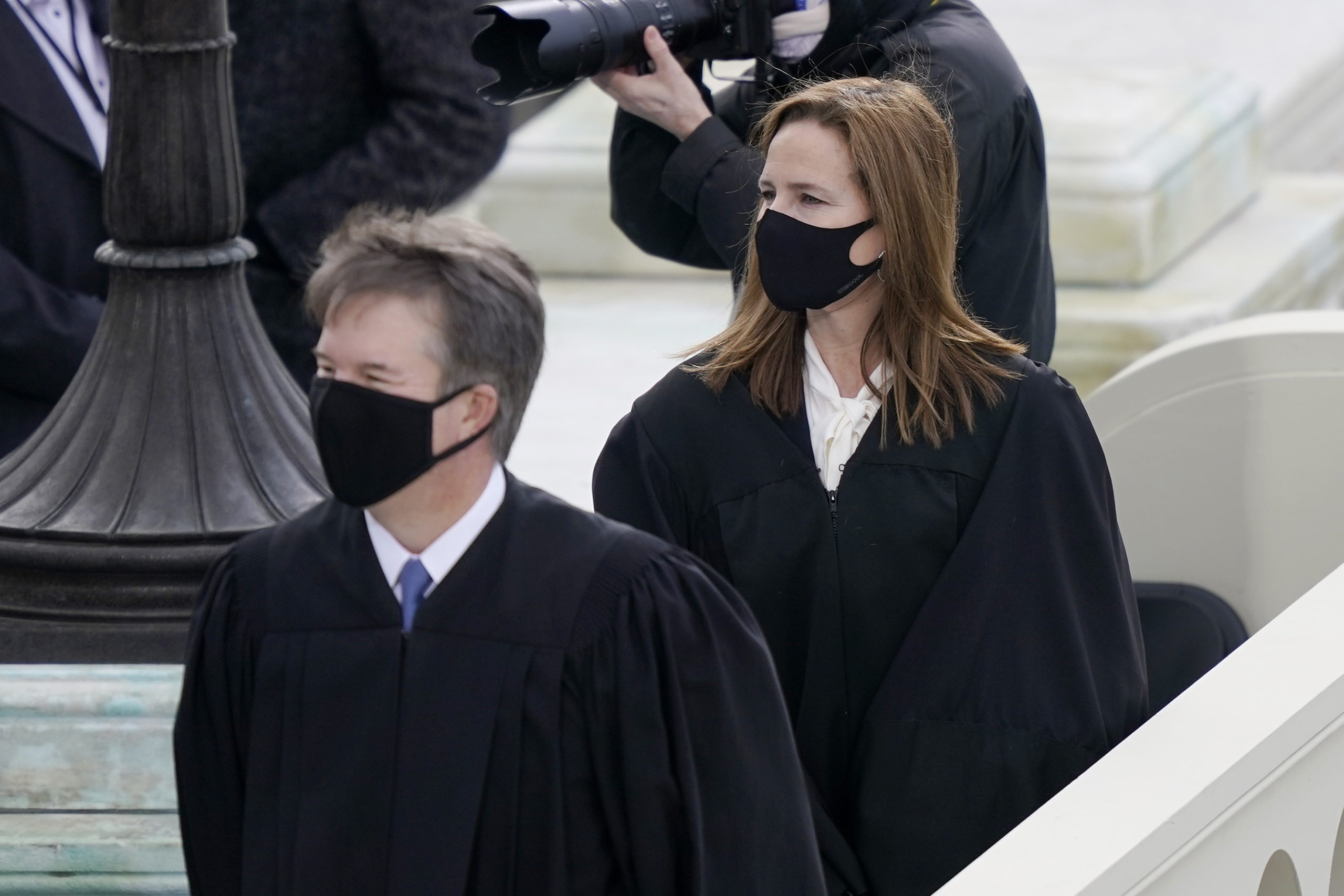 “Whether the Court rules in favor of MS or not, they’re normalizing narrowing the aperture, placing more people who need abortion further from service,” Hogue continued. “They have always understood, sometimes better than people who support Roe, that a right without access is not a right at all.”

The American people deserve to know who paid off Brett Kavanaugh’s seven- figure debts and bought themselves a SCOTUS seat.

Kavanaugh wants to overturn Roe vs. Wade. This will be a huge assault on women’s rights. We need to expand the Supreme Court!

“Gilead’s Supreme Court today began the process that will soon order forced childbirth for any and all women who become pregnant,” filmmaker Michael Moore captioned a Monday Instagram post, referencing the fictional totalitarian government of Gilead in “The Handmaid’s Tale.”

“No word yet on whether Justices Brett Kavanaugh and Amy Barrett have volunteered to physically hold down the women as they are forced to give birth,” he added.

Shoutout to all the gas-lighters who told us Kavanaugh and Coney Barrett wouldn’t touch Roe v. Wade pic.twitter.com/vVkadmD74a

The Women’s March warned in a tweet that the upcoming Supreme Court case is “what conservatives across the country have been rushing to accomplish ever since Amy Coney Barrett joined the Supreme Court.”

Remember when Neil Gorsuch, Brett Kavanaugh and Amy Coney Barrett evaded questions on Roe v Wade as settled law at their conformations – we all knew and now legal abortion is in jeopardy, but we’re not done yet.

11 is a really good number for SCOTUS.

Forced-birth advocates are poised to finally overturn Roe v Wade. As long as Kavanaugh and Barrett lied to the Senate and the American people, they have all the votes they need.
My latest in @thenation https://t.co/U9AvuSUzlh

The case deals with a 2018 Mississippi law banning abortions after 15 weeks, a law challenged by the Center for Reproductive Rights, the law firm Paul, Weiss, Rifkind, Wharton & Garrison, and the Mississippi Center for Justice on behalf of the last remaining abortion clinic in Mississippi — Jackson Women’s Health Organization. After the Fifth Circuit Court of Appeals struck down the law in December 2019, the state of Mississippi asked the Supreme Court to take up the case.

An unborn baby is considered viable at 24 weeks, though medical intervention and a stay in the NICU are usually required this early. Babies born before 23 weeks have a survival rate of about 5% to 6%, and analysis by Charlotte Lozier Institute medical experts found that unborn babies can feel pain as early as 12 weeks.

The Supreme Court will hear one out of the three questions presented by Mississippi, the pro-life group Americans United for Life said in a press release: “Whether all pre-viability prohibitions on elective abortions are unconstitutional.” This signals that the Court is focused on the constitutionality of legal limits on late-term abortions, AUL said.

“That the Supreme Court is considering this Mississippi law is a promising signal that perhaps a majority of Justices wish to give states greater power to regulate abortion,” Steven H. Aden, AUL Chief Legal Officer & General Counsel, said in a Monday statement. “At the same time, if the Court rejects Mississippi’s common sense HB 1510 protections, the pro-life movement will face a fundamental reckoning.”