Black Lives Matter PAC, which was founded and led by activist Patrisse Cullors, paid an art company run by the father of her only child nearly $150,000 to co-produce live election coverage, campaign and social media records show. Industry experts said it should have cost a fraction of that price.

The owners of two video production companies that have been in business for a combined six decades lampooned the quality of the live stream and said it should have cost no more than $55,000 to competently produce such an event.

“Preproduction and the night of the shoot — everything all-in — $50,000 to $55,000 is what our estimate would be. And it would look awesome,” said Tim Cramer, the owner of Mosaic, a video production company that has been in business for 24 years. “That’s the set, the venue, that’s everything. And that’s all top tier.”

The owner of a second video production company that works with a wide range of ideological groups, including some black-led organizations, said he could have done the job for $20,000.

“There’s definitely something amiss between just the cost, and when you add who the benefactor of this project was, that alone is a conflict of interest,” said the video producer, who asked to stay anonymous out of fear of professional retaliation. “You add the amount of money they got paid for such a useless, awful piece of video production. It just smells really, really bad.”

“I was just blasted away by how awful everything looked,” the video producer, who has worked in the industry for more than 40 years, told the DCNF. “It was just cheap and nasty looking.”

“Besides paying Trap Heals almost $150,000 to produce an unprofessional video that high school students would be embarrassed to produce, the excessive payments by Cullors to Trap Heals that she co-chairs with the father of her child raises serious questions whether political contributions to BLM PAC were not only misspent but also enriched her personally,” said Paul Kamenar, counsel to the conservative watchdog group National Legal and Policy Center.

“NLPC filed a complaint last year with the Federal Election Commission against Representative Ilhan Omar for paying consulting fees to her husband’s firm, which forced her to terminate her arrangement with his firm, and we’re considering filing a similar one against Cullors and BLM PAC,” Kamenar added. (RELATED: Ilhan Omar Cuts Ties With Husband’s Consulting Firm After Nearly $3 Million In Campaign Payments)

Cullors identified Trap Heals founder and CEO Damon Turner as the father of her only child on her verified Instagram page. She was also identified as a co-chair of the art company in a 2020 press release, the DCNF previously reported. (RELATED: ‘Huge Number Of Problems’: Charity Experts Sound Off On BLM Co-Founder Patrisse Cullors’ Potential Self-Dealing)

Multiple charity experts previously told the DCNF that Cullors’ connection to Trap Heals, combined with the fact that multiple activist groups under her control have engaged in business with the art company, raises ethical and legal questions.

Cullors was identified as the co-founder and chair of BLM PAC in a January 2021 statement the group issued.

Cullors, Trap Heals and BLM PAC did not return requests for comment.

The BLM PAC election-night live stream was mired in technical issues the moment Cullors and her co-host went live.

Multiple viewers complained in the live stream’s chat that Cullors’ co-host, activist Richie Reseda, and their data analyst Alex, whose last name was not disclosed when he was first introduced, could not be heard for about 20 minutes after they first appeared on the stream. 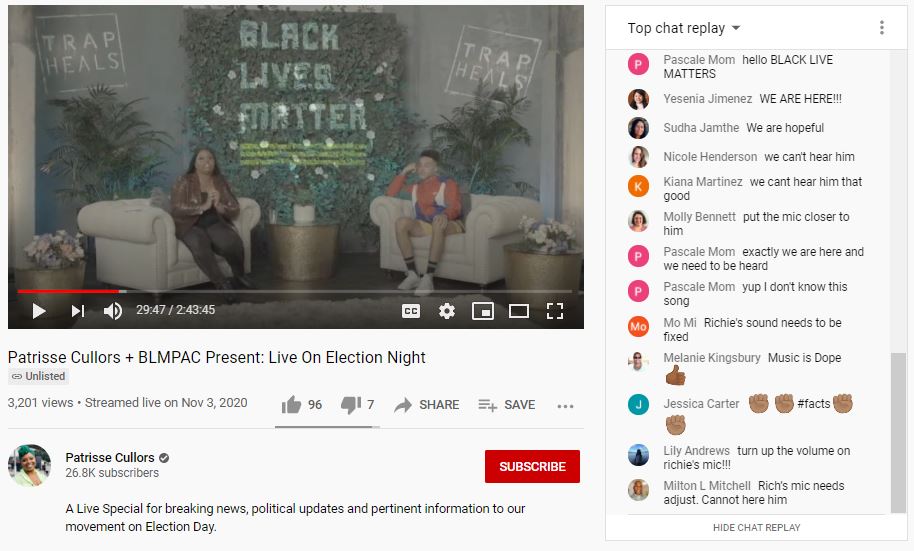 “Richie’s sound needs to be fixed,” one viewer wrote.

“Turn up the volume on richie’s mic!!!” another viewer wrote.

“FIX HIS MIC,” wrote another viewer.

“Uh oh Alex needs a mic too,” wrote another viewer when the data analyst first appeared on the stream. 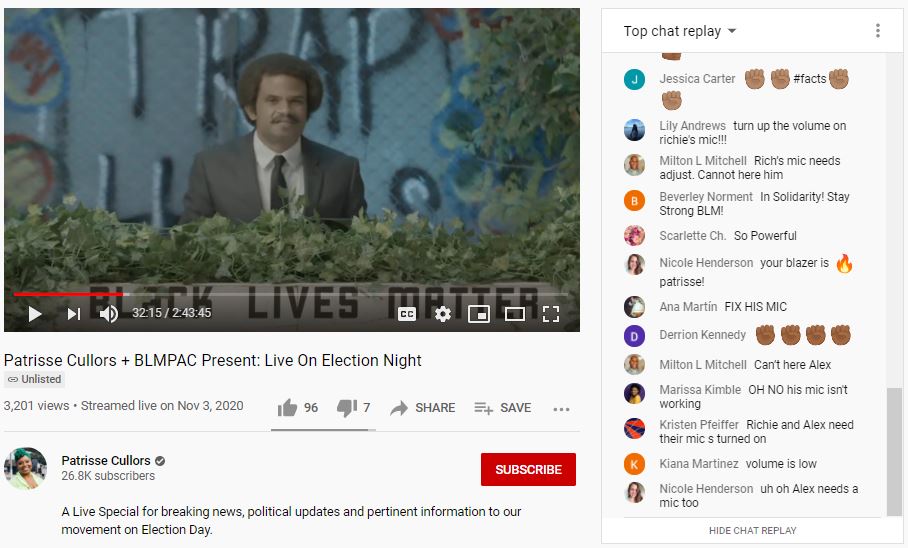 The stream suffered further audio and visual issues when Cullors’ first guest, comedian Ramy Youssef, was brought onto the show via a Zoom call.

Youssef’s audio was completely cut off when he first attempted to connect to the stream. As Youssef and Cullors’ producers tried unsuccessfully to fix the audio issue while live, Youssef’s visual feed was mirrored and repeated at least five times on the stream. 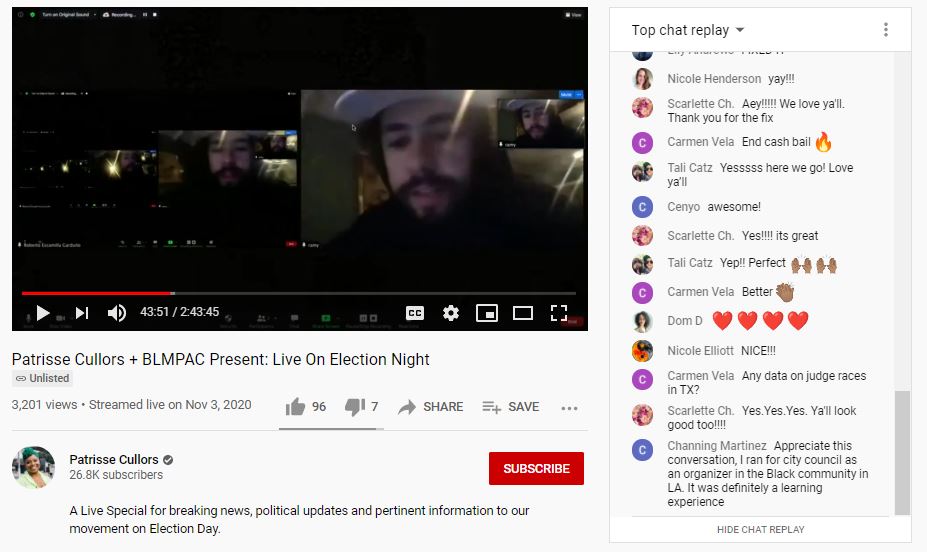 Youssef attempted to reconnect to the stream minutes later, but his audio feed remained completely cut off.

“This is rough,” Reseda said after Youssef left the stream a second time.

“I feel bad for you all,” someone can then be heard saying off-camera.

Youssef’s audio issues were resolved his third time calling into the show, more than 11 minutes after his first attempt to join the stream.

Later in the stream, however, the stream’s audio cut out entirely, starting when Cullors began interviewing content creator Phillip Agnew over Zoom.

The stream’s audio remained completely cut off when Agnew left the stream. Cullors and her co-host can be seen speaking on the set as multiple viewers complained that they couldn’t hear any sound.

“No sound again!” one viewer wrote.

“I don’t hear anything,” another said.

“just the way we like BLM…..muted,” one viewer added.

The stream’s audio returned after nearly five minutes of complete silence as Cullors and her co-host were engaged in the middle of a conversation. Agnew’s audio issues were resolved on his second attempt to join the stream later on in the show.

The stream also featured a number of pre-taped segments, some of which exhibited significant levels of audio distortion.

One viewer even offered technical advice about an hour into the stream as Cullors’ producers were working to resolve the issues plaguing the stream.

“You can hear the floor director or sound engineer prompting artists,” the viewer wrote. “Sounds like a break in the feed or crossed cables inputs.”

Cramer, the owner of the video production company Mosaic, highlighted one aspect of the BLM PAC stream that proved to him the production was the work of amateurs.

“The cameras they used, they didn’t know how to use them. I know what they did because I made the same mistake when I first got my cameras,” Cramer said. “They shoot in what’s called LOG. It’s flat. It allows you to do a lot of stuff in post-production, but you never shoot a live event in LOG because it looks terrible.”

Cramer explained that when high-quality cameras shoot in LOG mode, they shift skin tones either green or red.

“And it depends on what your skin tone is as to which one it’s going to shift to. Well, if you’re black, it shifts green on your face and if you’re white, it shifts red on your face,” Cramer explained. “Take a look at the video. Everybody who is shot on that set — their face is shifting green.”

“They never took it out of the default settings the camera shipped with,” Cramer said. “That’s the first thing I noticed.”

The owner of the second video production company who spoke with the DCNF anonymously also noted that the BLM PAC live stream was shot in LOG mode.

“They had to work hard to make it look as crappy as it did, as far as I’m concerned,” the video producer said. “Looking at that ridiculous set that they had, and the horrible look in the video. It’s flat, not lit. Off-color. It was just poorly produced.”

“It’s just amateur hour to me,” the producer added.