Belarus President Alexander Lukashenko condemned sanctions imposed by Europe after a passenger jet was diverted and a journalist on board arrested in Minsk over the weekend.

The longtime Belarus leader  – who has a history of suppressing free speech – had a military aircraft intercept, divert and force down a Ryanair flight carrying about 170 passengers Sunday. Belarusian air traffic controllers told pilots there was a possible “security threat on board” while the plane was flying over Belarus. The aircraft was subsequently escorted by a fighter jet and landed in Minsk, according to The New York Times.

Once on the ground, opposition journalist Raman Protasevich and his girlfriend were removed and arrested. The incident caused international uproar, with European Union (EU) leaders banning Belarusian airlines from using certain airspace, drafting sanctioning on officials with ties to the incident and more, The Associated Press reported.

“I acted in a lawful way, protecting people in line with international rules,” Lukashenko claimed on Wednesday following sanctions. “Our ill-wishers outside and inside the country have changed their methods of attacking the state. That’s why they switched from organizing riots to trying to strangle us.” 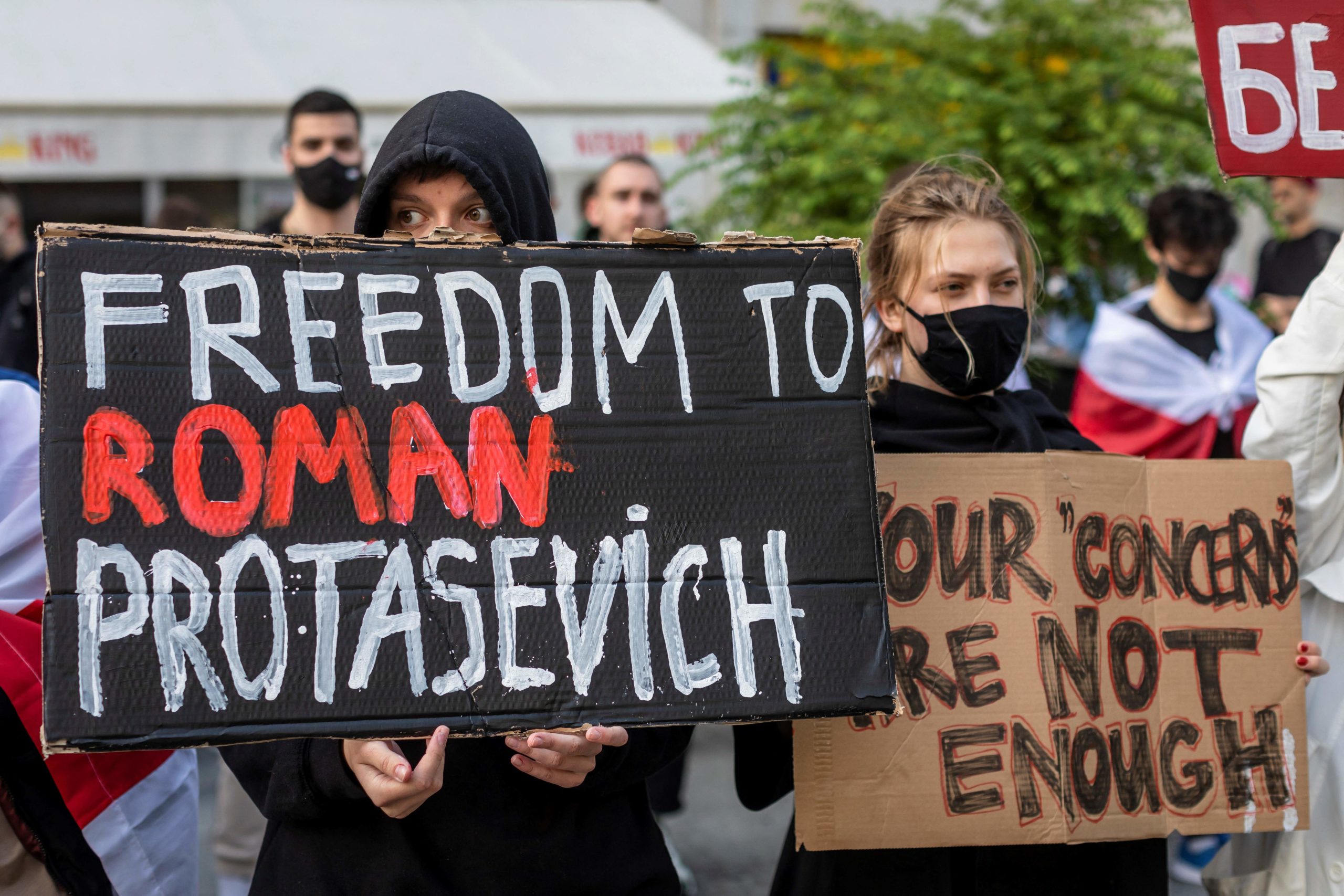 Belarusians living in Poland and Poles supporting them hold up a placard reading ‘Freedom to Roman Protasevich’ during a demonstration in front of the European Commission office in Warsaw on May 24, 2021, demanding freedom for Belarus opposition activist Roman Protasevich a day after a Ryanair flight from Athens to Vilnius carrying the dissident journalist was diverted while in Belarusian airspace. (WOJTEK RADWANSKI/AFP via Getty Images)

Lukashenko called allegations that a fighter jet forced the plane’s landing an “absolute lie” and continued to back his story that there was a bomb threat, the AP reported. He accused 26-year-old Protasevich, who ran a messaging app that helped organize massive protests against Lukashenko’s re-election, of instigating a “bloody rebellion.” (RELATED: Biden Admin Condemns ‘Shocking Act’ After Belarus Forces Down Passenger Plane, Seizes Journalist On Board)

Pratasevich was charged in absentia with staging mass riots and encouraging social hatred and faces up to 15 years in prison, according to the AP. He recently confessed to some charges in a video released after his arrest, although many have alleged the confession was coerced.

In response to the sanctions, Lukashenko threatened to weaken border processes that help limit things like drug trafficking.

“We were stopping migrants and drugs — now you will catch them and eat them yourself,” Lukashenko said according to the AP.