“USA doesn’t acknowledge Taiwan as a country – look it up. Stop conflating standing with USA and a statement,” Layfield said in one comment.

“Actually, it’s not. Never asked for full independence,” Layfield said in response to another Instagram user commenting “You people do realize Taiwan is a country? Just searched it up.” 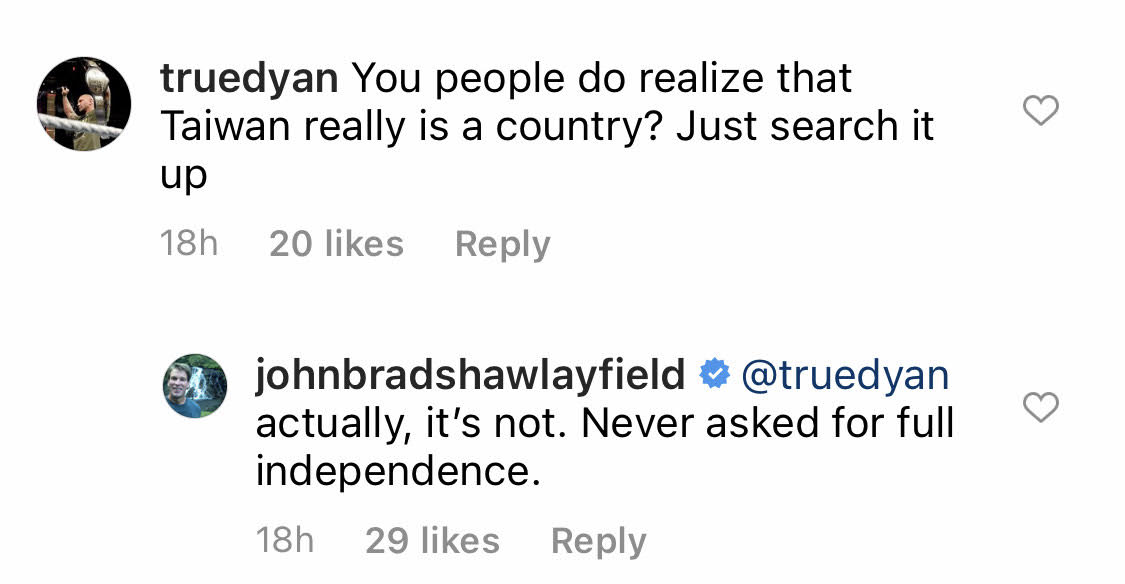 Cena made an apology video after he said that “Taiwan will be the first country to see” his new film “Fast and Furious 9.”

In the video, Cena apologized for claiming Taiwan was its own country and stated his “love and respect” for China.

Per popular request, here’s Mr. John Cena’s apology video with English subtitles. I kept all the incoherence in the video, as well as the curious absence of what he’s actually apologizing for pic.twitter.com/WmJlRcyOID

“.@johncena has granted 600+ Make a Wishes-a record. Supported cancer research, rise above hate, and a million of his own dollars for racial equality. I’ve been to Iraq and Afghanistan with him many times and have seen his tireless support for our soldiers. An incredible track record of making the world a better place. I’ll stand with this guy,” Layfield said in the post.

NBA star LeBron James criticized Houston Rockets general manager Daryl Morey in 2019 after he made comments in support of protestors in Hong Kong, lamenting that the comments would harm people “financially” and that the NBA had a “difficult week” because of Morey’s statement.

NBA Commissioner Adam Silver refused to boycott China after securing a major telecom deal in 2020 allowing NBA games to be broadcast in China.

“Fast and Furious 9” is currently projected to earn $160 million at the box office, according to Variety. The majority of the earnings so far, $105 million, have come from China.

The WWE did not respond to the Daily Caller’s request for comment.