Florida Agricultural Commissioner Nikki Fried will run in the Democratic primary for governor.

“Those in power will do whatever harm it takes to stay there. But I’ve spent my whole life taking on the system. I’m unafraid. I’m tested. I’m ready,” Fried said in an announcement video posted to Twitter.

Fried joins Rep. Charlie Crist in the primary field. Crist, a former Republican, served as the state’s governor from 2007-2011.

It’s time to break the rigged, corrupt system in Florida with #SomethingNew.

That’s why I’m running for Governor.
Join us at https://t.co/pSDjoC7HWW. pic.twitter.com/Vzb1MnBuSB

During her time in office, Fried has shared multiple conspiracy theories about Republican Florida Gov. Ron DeSantis. She has also promoted Rebekah Jones, a former state employee who claimed, without evidence, that she was ordered to change the number of Florida’s COVID-19 cases and deaths. Jones was later arrested for allegedly hacking Florida’s emergency alert system. 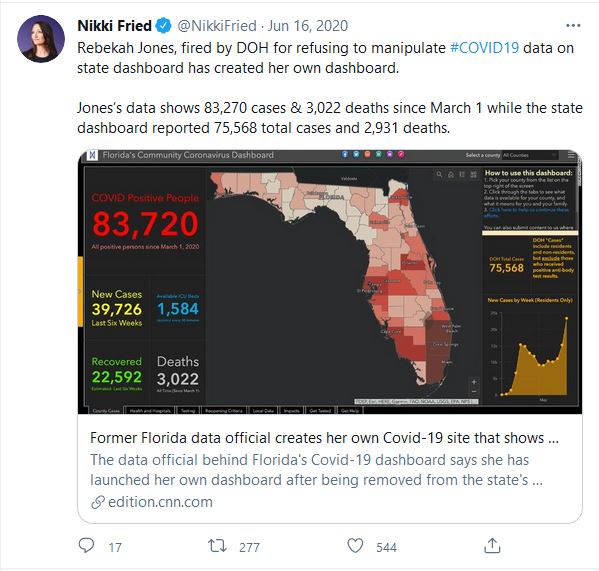 After the Miami Herald reported that DeSantis donors were among the elderly members of a Florida gated community that was one of the first to receive COVID-19 vaccines, Fried announced that she would meet with the FBI over the state’s lack of “equal opportunity and equal access” to vaccines.

“There are numerous alarming reports of alleged political favoritism by Gov. Ron DeSantis in the distribution of COVID-19 vaccine doses throughout the State of Florida,” she wrote.

In addition to the “pop-up” sites, Fried claimed that DeSantis “withheld vaccine doses, in an act of potential political retribution, from the largely Hispanic, predominantly Cuban-American city of Hialeah whose mayor has been critical of DeSantis.”

Fried also praised a since-debunked 60 Minutes segment alleging that the state of Florida partnered with the grocery-store chain Publix to distribute COVID-19 vaccines because it donated to DeSantis’ election campaign.

“Tonight 60 Minutes is exposing the nation to Gov. Ron DeSantis’ failings & corruption during the pandemic,” she tweeted. 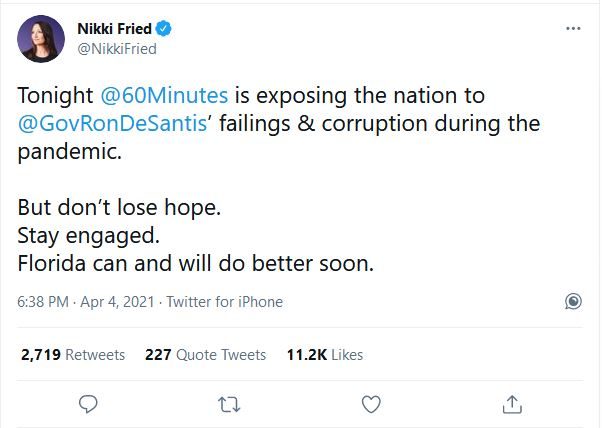 Multiple Florida officials, including Democrats, called out the 60 Minutes segment for its inaccuracies.

“I told them that the Publix story was ‘bullshit,’ he continued. “Walked them through the whole process. The fact that I didn’t sit down on ‘camera’ because I am responding to a 100 year emergency doesn’t change the truth.”

“The reporting was not just based on bad information—it was intentionally false,” Democratic Palm Beach Mayor Dave Kerner added. “I know this because I offered to provide my insight into Palm Beach County’s vaccination efforts and 60 Minutes declined.”

Fried also refused to follow a DeSantis order calling for state flags to be flown at half-staff in honor of the late radio host Rush Limbaugh. “We will not celebrate hate speech, bigotry, and division,” she said.

Fried did not immediately respond to the Daily Caller’s request for comment.