A 9-year-old boy is the lone survivor of an attack on a Muslim family in Canada that police believe was “premeditated,” numerous sources reported.

Police say a suspect driving a truck in London, Ontario, jumped a curb in his vehicle and struck five members of the family Sunday, Reuters reported. Two women, aged 74 and 44, a 46-year-old man, and a 15-year-old girl were killed, the BBC reported. 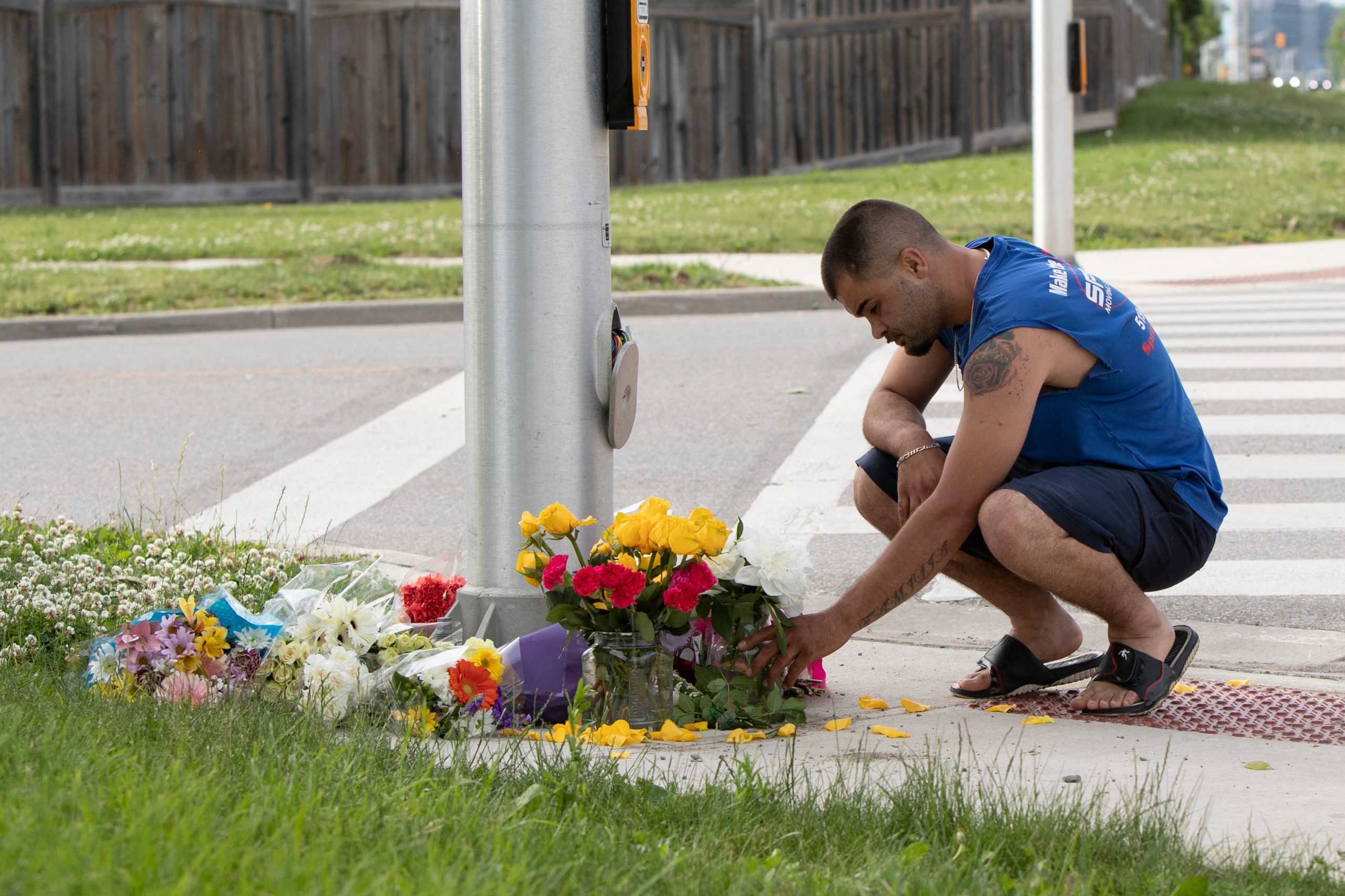 A man brings flowers and pays his respects at the scene where a man driving a pickup truck struck and killed four members of a Muslim family in London, Ontario, Canada on June 7, 2021. (Photo by NICOLE OSBORNE/AFP via Getty Images)

The 9-year-old boy is in the hospital with serious injuries after the attack, according to the BBC.

The extended family of the victims in the attack identified the dead as Salman Afzal, 46; his wife Madiha, 44; their daughter Yumna, 15; and a 74-year-old grandmother whose name was withheld, according to NPR. The boy in the hospital was identified as Fayez. The family had reportedly immigrated to the Canada from Pakistan.

Police believe the suspect, who was wearing a vest that appeared to resemble “body armour” at the time of his arrest, had allegedly targeted the family, Reuters reported.

“It is believed that these victims were targeted because they were Muslim,” Det Supt. Paul Waight said Monday, according to the BBC.

“There is evidence that this was a planned, premeditated act, motivated by hate,” he said, according to Reuters.

Police had not announced ties between the suspect and any hate groups. Veltman does not have a criminal record and there was no evidence he had accomplices, according to Reuters.

A witness of the attack told CTV that she shielded her daughter’s eyes from the bodies during the attack, and another described the incident as “chaos,” with people running and screaming.

“This was an act of mass murder, perpetrated against Muslims, against Londoners, and rooted in unspeakable hatred,” London Mayor Ed Holder said, according to the BBC.

London has a large Muslim and Arab community, and Arabic is the second-most spoken language in the city after English, Holder said, according to Reuters.

Saddened to learn of the killing of a Muslim Pakistani-origin Canadian family in London, Ontario. This condemnable act of terrorism reveals the growing Islamophobia in Western countries. Islamophonia needs to be countered holistically by the international community.

“This condemnable act of terrorism reveals the growing Islamophobia in Western countries. Islamophobia needs to be countered holistically by the international community,” Khan said on Twitter.

Canadian Prime Minister Justin Trudeau said in a tweet that leaders would use “every tool we have to combat Islamophobia.”

The vehicle attack was the most deadly one against Muslims in Canada since 2017, when Alexandre Bissonnette stormed a mosque in Quebec City, fatally shooting six people. He pleaded guilty to the attack and was given a life sentence in November, meaning he will be eligible for parole after 25 years, the BBC reported. (RELATED: Quebec City Attacker On Mosque Identified)