Environmental group Sierra Club’s Colorado chapter protested an event by an oil and natural gas advocacy organization by flying a gas-powered airplane over it.

Colorado Sierra Club used a gas-powered plane to conduct a flyover of a golf outing hosted by the Western Energy Alliance on Monday. The environmental group tweeted a photo of their plane over the event, but deleted the post after receiving criticism for the flyover.

“[Western Energy Alliance] hosted a golf outing yesterday to raise money to fight regulations so they can make Coloradans pay for their unplugged gas wells, healthy & safety hazards, and toxic messes,” the environmental group tweeted Tuesday, according to a screen grab of the tweet. “We did a flyover to show them how Coloradans really felt about it.”

Leaders of the energy organization thought it was laughable that an environmental group would waste so much gasoline for the sake of a “sophomoric” stunt, Western Energy Alliance President Kathleen Sgamma told the Daily Caller News Foundation. (RELATED: 13 States Sue Biden Administration Over Federal Oil And Gas Leasing Ban)

“It’s even more laughable for them to think they speak for any Coloradans other than far left activists opposed to any oil and gas or that we’re unfamiliar with their juvenile rhetoric and need to be schooled in it,” Sgamma told the DCNF.

“We return over a billion dollars to the state every year for schools, public health, safety and other vital services, so what tab they think they’re entitled to is contradicted by the funds they have to waste on a private plane and a social media stunt that lasted about an hour,” she continued. 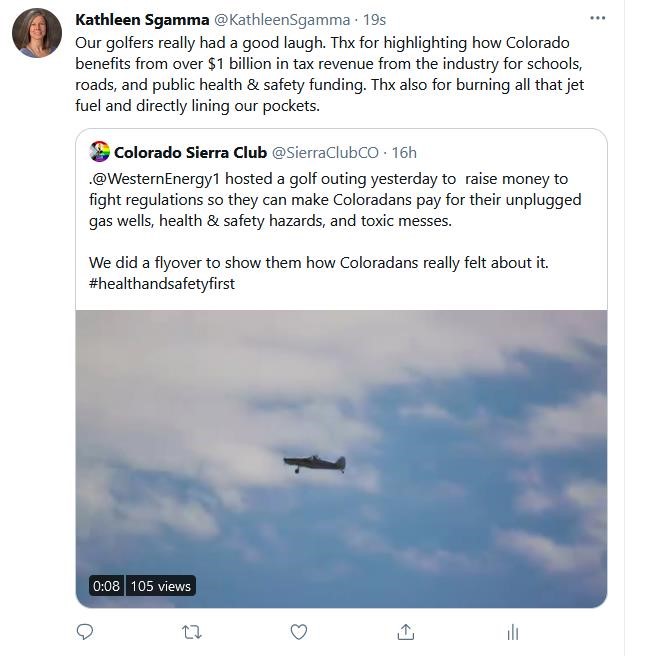 Colorado Sierra Club did not respond to a request for comment.

The Western Energy Alliance, which is based in Denver, Colorado, represents about 200 oil and natural gas companies that operate across more than 10 states. The organization advocates on behalf of their member companies at the federal and local level.

The alliance regularly hosts networking events such as golf outings, wine tastings and happy hours, according to its website.

In January, the Western Energy Alliance filed a lawsuit against President Joe Biden’s administration, challenging an executive order that banned new oil and gas leasing on federal lands. The lawsuit alleged that Biden’s executive order would result in tens of thousands of lost jobs, lower wages and economic damage worth upwards of $30 billion.