The federal government restored $1 billion in funding for California’s much-criticized bullet train project that critics have dubbed the “train to nowhere.”

The Department of Transportation agreed to return the funds, which had previously been stripped by former President Donald Trump’s administration, for the California High-Speed Rail Project on Thursday evening, Democratic Gov. Gavin Newsom announced. The 119-mile project has a total of 35 construction sites in California’s Central Valley and averages 1,100 workers per day.

“Tonight’s action by the federal government is further proof that California and the Biden-Harris Administration share a common vision — clean, electrified transportation that will serve generations to come,” Newsom said in a statement.

“Restoring nearly $929 million in grant funding back to California’s High-Speed Rail project will continue to spur job creation, advance the project and move the state one step closer to getting trains running in California as soon as possible,” he continued. “We thank the Biden-Harris Administration and Secretary [Pete] Buttigieg for their partnership on this important step forward.”

Transportation Secretary Buttigieg had been noncommittal when asked about whether the government would help fund the project during an April news conference. He responded, saying “communities of different types” would benefit from high-speed rail. (RELATED: Trump Slams High-Speed Rail: ‘Hundreds Of Times More Expensive’ Than A Wall) 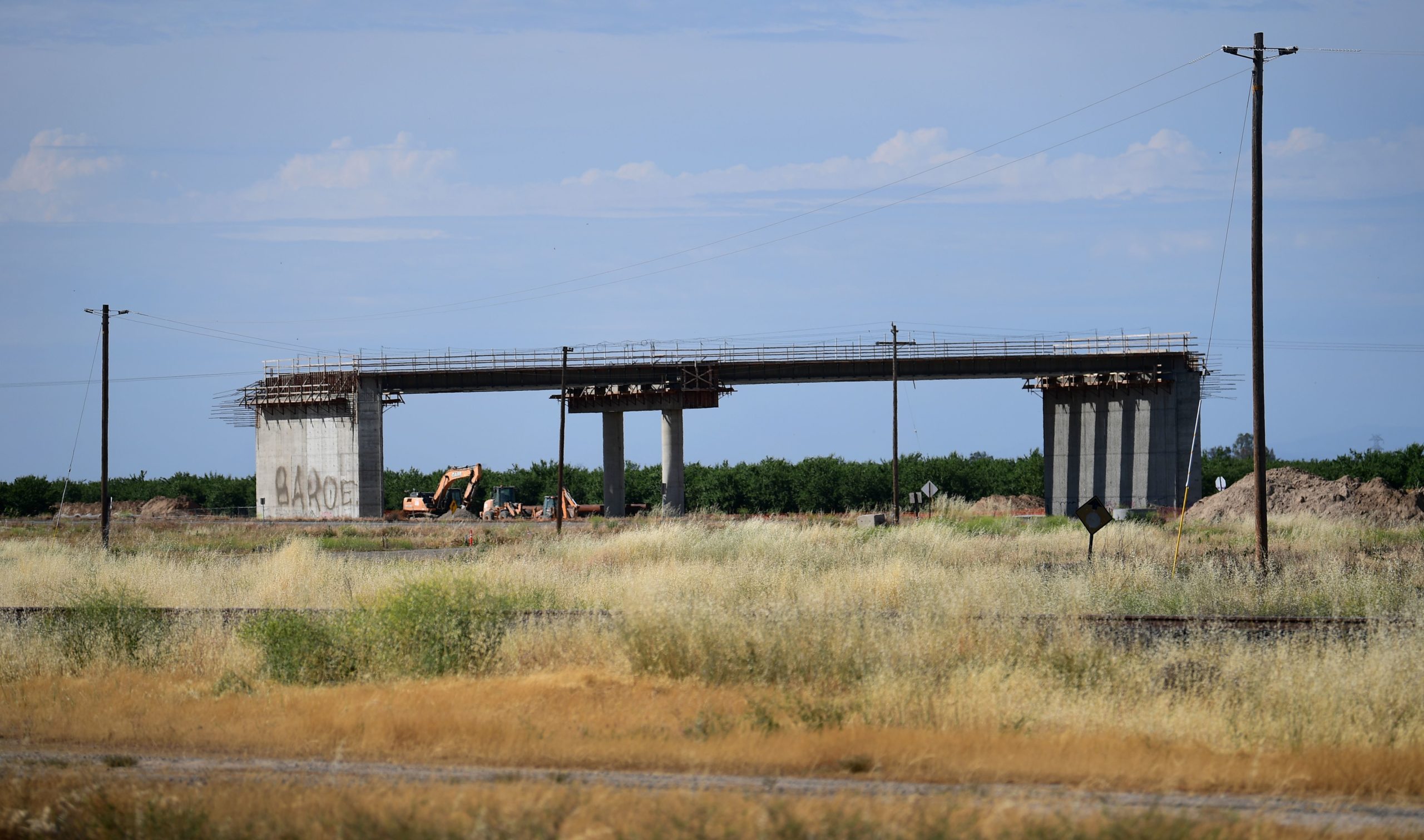 A construction site is seen on the California High Speed-Railway in Fresno, California on May 5, 2019. (Frederic J. Brown/AFP via Getty Images)

Former Gov. Arnold Schwarzenegger had first introduced the plan for the high-speed rail system and his successor Gov. Jerry Brown continued the project. In 2010, the federal government agreed to give California $3.5 billion for proposed railway.

But, Newsom scaled the project back significantly after taking office in 2019. The over-budget, behind-schedule project would now travel from Merced to Fresno to Bakersfield — the 5th, 9th and 102nd largest cities in the state — Newsom said.

“Let’s be real. The project, as currently planned, would cost too much and take too long. There’s been too little oversight and not enough transparency,” Newsom said during his first State of the State Address in February 2019. “Right now, there simply isn’t a path to get from Sacramento to San Diego, let alone from San Francisco to L.A. I wish there were.”

In response, the Trump administration attempted to take its $3.5 billion in funds back, but could only obtain the nearly $1 billion that had not been spent. The Federal Railroad Administration (FRA) said it would strip the unused funds from the State of California in a scathing 25-page letter sent in May 2019. (RELATED: Newsom Attempts To Clarify Incoherent Comments On High-Speed Rail Project) 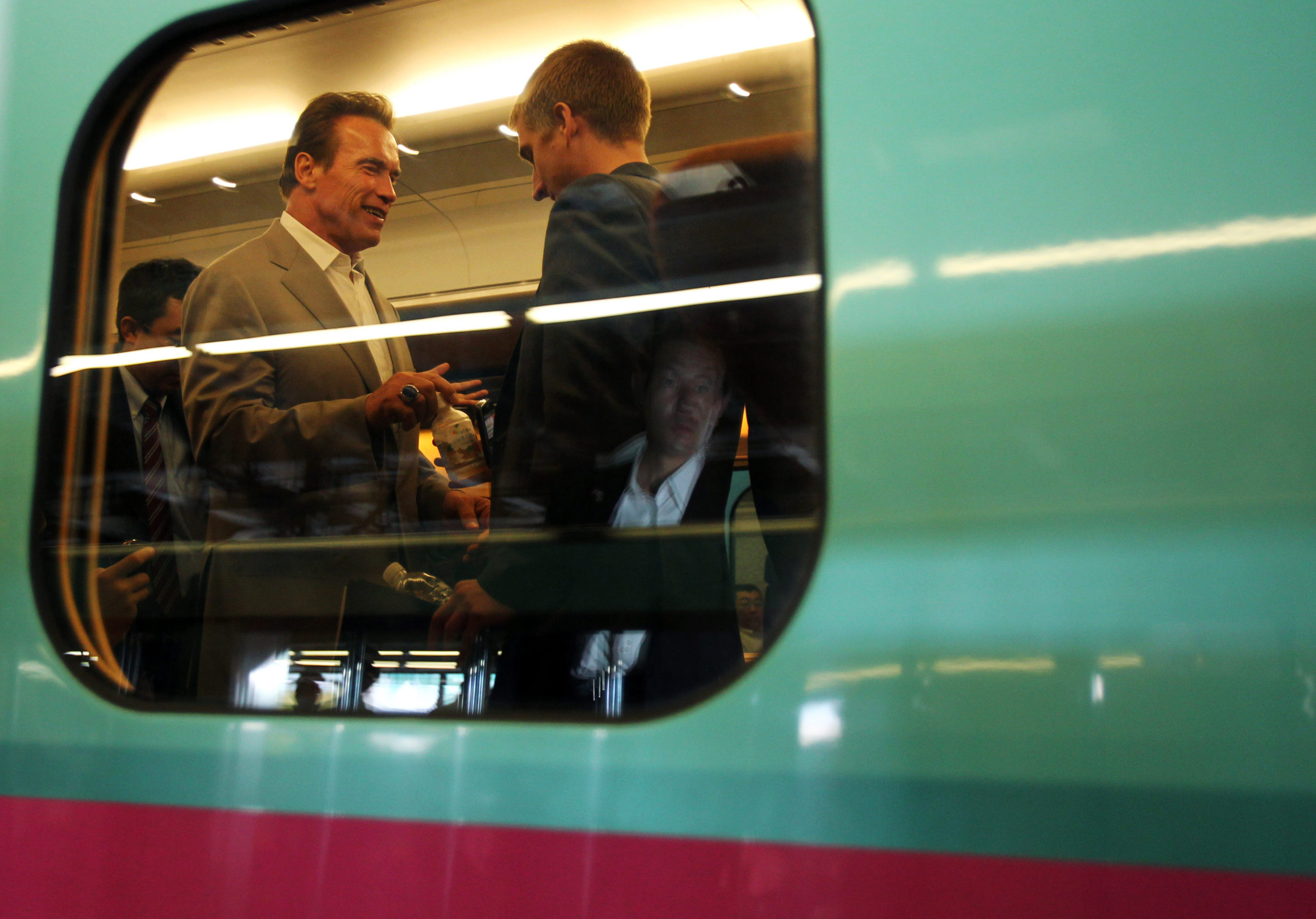 Former California Gov. Arnold Schwarzenegger chats during an inspection of a high-speed train on Sept. 14, 2010. (Shuji Kajiyama/AFP via Getty Images)

“It is now clear that California has no foreseeable plans, nor the capability, to pursue that statewide [High-Speed Rail] System as originally proposed,” former FRA Administrator Ronald Batory wrote in the letter. “[California] is chronically behind in Project construction activities and has not been able to correct or mitigate its deficiencies.”

Due to its numerous failures, critics have called the project the “boondoggle bullet train to nowhere,” according to the Los Angeles Times.

If completed, the project would become the nation’s first high-speed rail system, according to Newsom.