Biden and Putin’s much-anticipated meeting comes on the heels of the 2021 G-7 summit. The duo will speak for the first time since Biden took office in Geneva, Switzerland. Two U.S. officials familiar with the matter told CNN that plans currently don’t include a joint press conference.

This would mark a change from Biden’s predecessor, former President Donald Trump, who met with Putin on June 16, 2018, and held a joint press conference afterwards. The details of this particular summit are still being hashed out, though – and likely will be until just before the event begins – so plans could change, according to CNN.

Kremlin spokesman Dmitry Peskov told CNN that Putin is willing to hold a joint press conference, but added that they aren’t expecting one to happen.

“We heard about such a possibility from our American counterparts, but we are still waiting for final confirmation,” he reportedly said.

The administration has given reporters a small glimpse into topics expected to be discussed during Biden’s meeting with Putin. The American president will press Putin on recent hacking attacks against U.S. companies that originated from Russia-based hacking groups. Biden is also looking “to restore predictability and stability to the U.S.-Russia relationship,” White House press secretary Jen Psaki previously noted.

Still, Biden is keeping most details private. When asked for his message to Putin on Friday, Biden said he would give up that information after speaking with the Russian president.

“I’ll tell you after I deliver it,” Biden said at the G-7 summit. 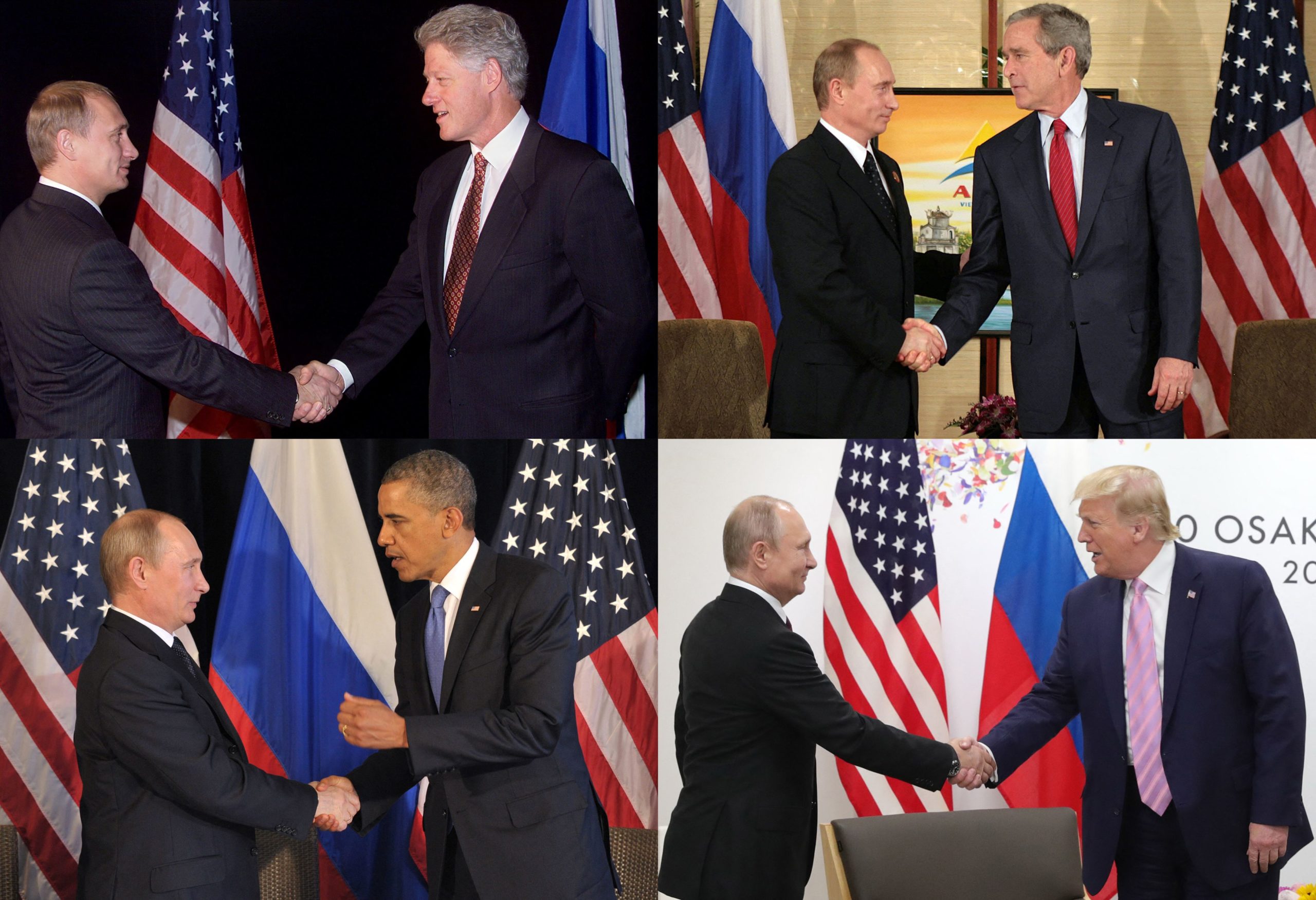 (COMBO) This combination of pictures created on June 11, 2021 shows Russian President Vladimir Putin (L) shaking hands with US Presidents (from top left) Bill Clinton in the lobby of the Stamford Hotel in Auckland, New Zealand on September 12, 1999 on the first day of the annual Asia Pacific Economic Cooperation (APEC) meeting, US President George W. Bush during a bilateral meeting on the sidelines of the Asian Pacific Economic Cooperation (APEC) summit in Hanoi on November 19, 2006, US President Barack Obama in Los Cabos, Mexico, on June 18, 2012, during the G20 leaders Summit and US President Donald Trump during the G20 summit in Osaka on June 28, 2019. (Photo by STEPHEN JAFFE,JIM WATSON,ALEXEY NIKOLSKY,MIKHAIL KLIMENTYEV/RIA NOVOSTI/AFP via Getty Images)

“He does want to have an opportunity after that meeting to read it out and speak about his impressions and what he sees as the way forward,” Sullivan explained.

Relations between the U.S. and Russia as struggling. The U.S. previously finalized sanctions on Russia after multiple incidents, including its decision to jail opposition leader Alexei Navalny. Biden hasn’t been entirely silent on his feelings about the Russian president either, calling him a “killer” in March.

In retaliation, Putin recalled Russia’s ambassador to the U.S. just hours later. More recently, Russia warned America and said it should expect “uncomfortable” signals leading up to Biden and Putin’s meeting. (RELATED: Putin Blasts US As Hypocritical Ahead Of Meeting With Biden, Points To Prosecution Of Capitol Rioters)

“The Americans must assume that a number of signals from Moscow … will be uncomfortable for them, including in the coming days,” Russia’s Deputy Foreign Minister Sergei Ryabkov said according to RIA news agency, Reuters reported.

Biden said the trip “is about realizing America’s renewed commitment to our allies and partners,” according to an op-ed published by The Washington Post prior to his trip.

“Whether it is ending the COVID-19 pandemic everywhere, meeting the demands of an accelerating climate crisis, or confronting the harmful activities of the governments of China and Russia, the United States must lead the world from a position of strength,” the president wrote.