A spokesperson for the Portland Police Bureau told the Daily Caller News Foundation Thursday that the department doesn’t track gang activity despite reports detailing an increase in gang violence in the city.

Police officials estimate half of the 470 shootings that have injured more than 140 people in Portland, Oregon, this year were gang-related, the Associated Press reported June 10. Law enforcement officials have been investigating multiple shooting incidents a week where between 50 and 70 shots were fired as gang attacks increase.

“In Portland, ‘gang violence’ is not a category of crime,” a department spokesperson told the DCNF Wednesday.

“We investigate criminal activity. The terms ‘gang violence’ and ‘gang activity’ are phrases which could be variously defined,” the spokesperson told the DCNF.

“The Police Bureau prefers to focus on that which is clearly defined and crimes each have a definition under the law. Those other phrases do not. It would be hard to measure or investigate something that is not clearly defined,” the spokesperson added. 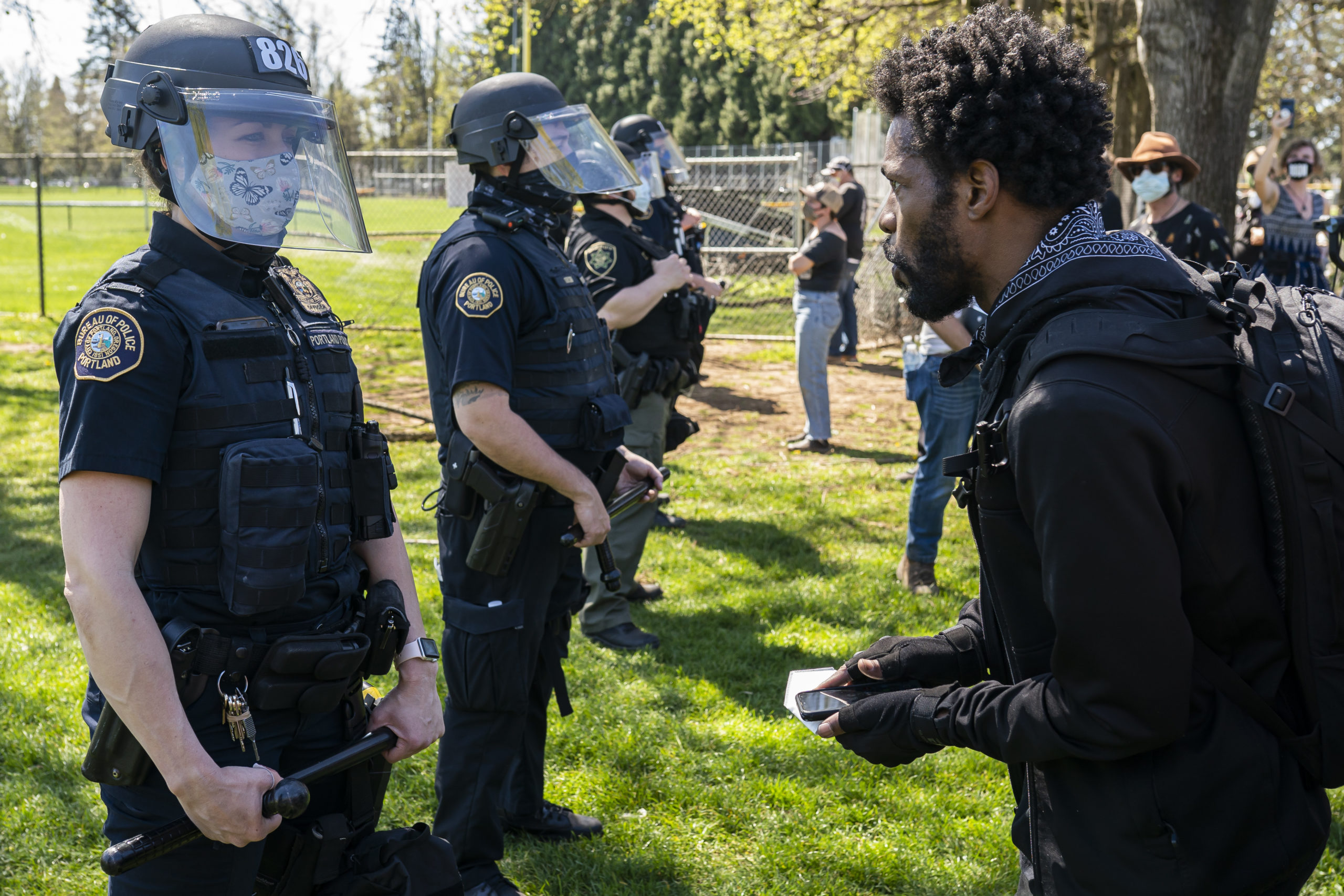 A protester argues with a Portland riot officer following the police shooting of a homeless man in Lents Park on April 16, 2021 in Portland, Oregon. (Nathan Howard/Getty Images)

Democratic Portland Mayor Ted Wheeler announced an increase in federal law enforcement presence around the city in May after “groups involved in this violence” instructed members to shoot someone within 30 days or risk being shot themselves. Some gang members traveled to Portland from other states to engage in the violence, though Wheeler did not use the term “gang.”

“Groups involved in this violence have issued an order to shoot someone in the next 30 days or be shot for not showing loyalty,” Wheeler said in a statement. Wheeler added that “individuals and groups” came from California and Washington to “engage in and advance gun violence.”

Community leaders say gang activity has increased in the city because of COVID-19 restrictions, George Floyd’s murder and a decrease in police presence, according to the AP. Gangs are targeting vigils and not following the previous pattern of “tit-for-tat” attacks. (RELATED: Months After Gutting Police Budget, Portland Mayor Asks For $2 Million To Stop Surging Murder Rate)

“You have multiple shooters — that’s kind of a new phenomenon — multiple guns and lots of shots being fired,” Portland Police Sgt. Ken Duilio said, the AP reported. “There are a lot of bullets being fired in this area — all over the place. But the police bureau is underfunded, understaffed and under supported.”

Portland officials recorded 37 homicides in the city this year, over six times the number recorded over the same period last year, according to the AP. Over 120 police officers have left the Portland Police Bureau for reasons including low morale and burnout from responding to civil unrest.

“You took away the gun violence reduction team. There is nobody in this city doing traffic stops of these armed, violent shooters traveling the city looking for their rivals to shoot and who are going to vigils and lighting up an entire crowd,” Duilio said, the AP reported.

More officers were assigned to investigate shootings in 2021, and Portland City Council voted to create a team of officers dedicated to gun violence, but the officers will likely have to be pulled from other duties since additional funding was not provided, the AP reported.