Two teachers at Barrington High School in Rhode Island encouraged their students to testify against a state bill that would prohibit teaching Critical Race Theory (CRT), and one of them offered extra credit for doing so.

House Bill 6070 would prohibit teaching “divisive concepts” that would make “any individual feel discomfort, guilty, anguish or any distress on account of their race or sex.”

The bill, introduced by Republican Rep. Patricia Morgan, also prohibits teaching that the United States or Rhode Island is fundamentally racist or sexist.

Two teachers at Barrington, Jennifer Bergevine and Alison Grieco, sent emails to their classes encouraging students to testify against the bill at a Rhode Island House education subcommittee hearing. Emails sent by the two were publicly released after a FOIA request was filed by Parents Defending Education, a grassroots organization that seeks to push back against CRT-infused agendas being taught in American schools.

On the afternoon of March 30, Grieco emailed her students the following: “Hello everyone, I have just learned that H6070 is in committee in the RI House of Representatives. This bill essentially states that there should be no discussion of race or gender in classrooms. As News Channel 10 puts it, ‘Bill would prohibit teaching of concepts around racism and sexism in Rhode Island’…Here is a link to the news story about it.”

The education subcommittee hearing was held on March 31. (RELATED: 85% Of Democrats Believe CRT Is ‘Good For America,’ Poll Finds) 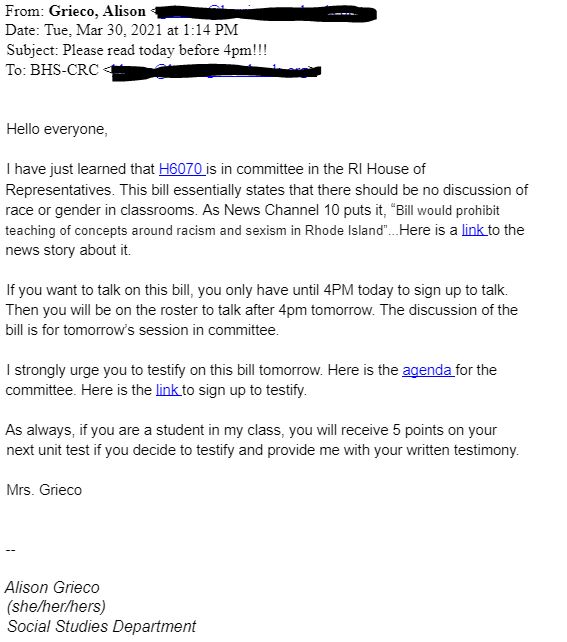 “I strongly urge you to testify on this bill tomorrow. Here is the agenda for the committee. Here is the link to sign up to testify,” she continued. “As always, if you are a student in my class, you will receive 5 points on your next unit test if you decide to testify and provide me with your written testimony.”

Minutes later, Greico received an email from Bergevine in which Bergevine says she had emailed her English students about the bill as well.

Bergevine told her students, “If this passes I would no longer be able to teach the unit on Race or Gender. I have requested to testify in opposition and will be submitting written testimony. Directions on how to do this are at the bottom of the agenda for the meeting.”

“As I prepare my statement, I would like to be able to include student voices. Please feel free to share with me what you believe is the benefit of potentially ‘divisive concepts’ such as Race and Gender,” she added.

At the hearing, 120 people testified against the bill, with just three in support. Of the handful of students who did testify, all of them were in opposition to the bill.

PDE says it has not taken a position on the bill, and merely inquired after receiving a tip about the situation. (RELATED: School District To Begin ‘Anti-Racist’ And LGBTQ Education In Pre-K)

When she was made aware of PDE’s inquiry, Greico responded by arguing that she had not promoted any particular position on the bill and was simply encouraging students to be “active members of our democracy.” She also claimed that she encourages students to participate in the political process any time a bill relevant to them is introduced, including by testifying before lawmakers.

Greico also wrote that in addition to her testimony against the bill, Bergevine also testified, while the school’s co-chair of the Diversity, Equity & Inclusivity Advisory Committee Gina Bae submitted testimony as well.