The US Special Operations Command reinstated its head of diversity on Thursday after an investigation concluded he did not violate any Defense Department policies in a series of controversial Facebook posts.

Richard Torres-Estrada was named Chief of Diversity & Inclusion for the Defense Department’s US Special Operations Command (USSOCOM) in March, but was reassigned pending an investigation into his social media activity, which included a post comparing then-president Donald Trump to Adolf Hitler.

The investigation found that Torres-Estrada’s posts violated no Defense Department (DoD) policies and he could return to his job, Military Times reported Thursday.

“Mr. Torres-Estrada has resumed the duties of the Chief of Diversity & Inclusion for United States Special Operations Command after a USSOCOM commander-directed investigation into the circumstances surrounding his hiring concluded and found no violations of law or DoD regulation,” USSOCOM spokesman Ken McGraw told the Daily Caller News Foundation in a statement Friday. 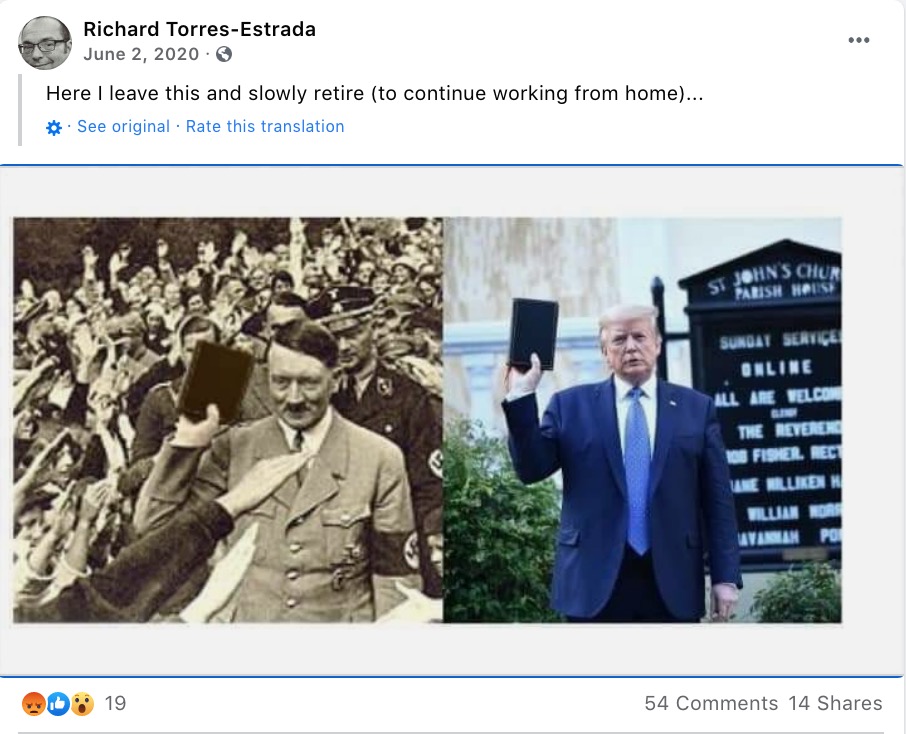 Torres-Estrada had posted a photo on his Facebook last June of Trump standing outside St. John’s Church in Washington, D.C., holding a Bible, next to a picture of Hitler holding up a book during a Nazi rally. He also made derogatory comments about Trump and his Cabinet, and posted a meme mocking Republican Sen. Ted Cruz in February, Military.com reports.

Richard Clarke, the USSOCOM commander, had personally called for an investigation into the posts, which were made before Torres-Estrada was hired, according to Stars and Stripes.

The contents of the USSOCOM investigation into Torres-Estrada’s posts were not made public. However, USSOCOM spokesman Ken McGraw told CNN that DOD policies “specifically prohibit the screening of candidates’ social media during the hiring process and requires adherence to the merit-based system principles codified in law.”

USSOCOM announced Torres-Estrada’s hiring in a tweet looking forward to his contribution “helping us recruit the best of the best.” However, the Chief Diversity & Inclusion Officer’s duties do not include recruiting or hiring, according to McGraw, and Torres-Estrada would not be in a position to make employment decisions.

“USSOCOM is sharing the lessons learned from this investigation with the appropriate agencies in the Dept. of the Air Force and Dept. of Defense so they can determine if further review of current hiring procedures is warranted,” he told the Daily Caller News Foundation.

Editor’s note: This story has been updated to reflect additional comments from USSOCOM spokesperson Ken McGraw.