Though Adams holds a sizable lead over the field, preliminary results show, the data released Tuesday by the city’s Board of Elections is just the first-choice numbers from early and in-person ballots, meaning that the race is far from concluded. Former de Blasio counsel Maya Wiley and former city sanitation commissioner Kathryn Garcia stood in second and third with the overwhelming majority of round one votes counted.

Yang, who held a commanding lead earlier in the race, stood in fourth Tuesday night, and promptly conceded the race.

“I am not going to be the next mayor of New York City based upon the numbers that have come in tonight,” Yang told his supporters. “Though we’re not sure ultimately who the next mayor is going to be, but whoever that person is I will be very happy to work with them to help improve the lives of the 8.3 million people who live in our great city.”

The election is the first in New York City to use ranked-choice voting, meaning voters can rank up to five candidates in order of preference instead of picking just one. However, the ranked-choice process does not kick off for another week and absentee ballots will not be counted until July 6, meaning that the winner may not be known until the week of July 12.

Adams, a former New York Police Department officer who has campaigned on lowering the city’s crime rate and obtained the endorsement of most of the city’s police organizations, has led in recent polls. He has supported past use of stop-and-frisk, opposes the “defund the police” movement and has said that he will carry if elected, putting him at odds with many of his fellow candidates and making him a target of the progressive left and several of his fellow candidates.

Yang has campaigned on a universal basic income like he did while running for president, and Garcia has emphasized policies aimed at rejuvenating small businesses and helping the city combat climate change. The two teamed up this past weekend, urging their respective supporters to rank the other second in a bid to blunt Adams’ momentum going into election day. (RELATED: Voters Set To Pick Who Will Lead New York City’s Economic Recovery, Fight Against Rising Crime And More) 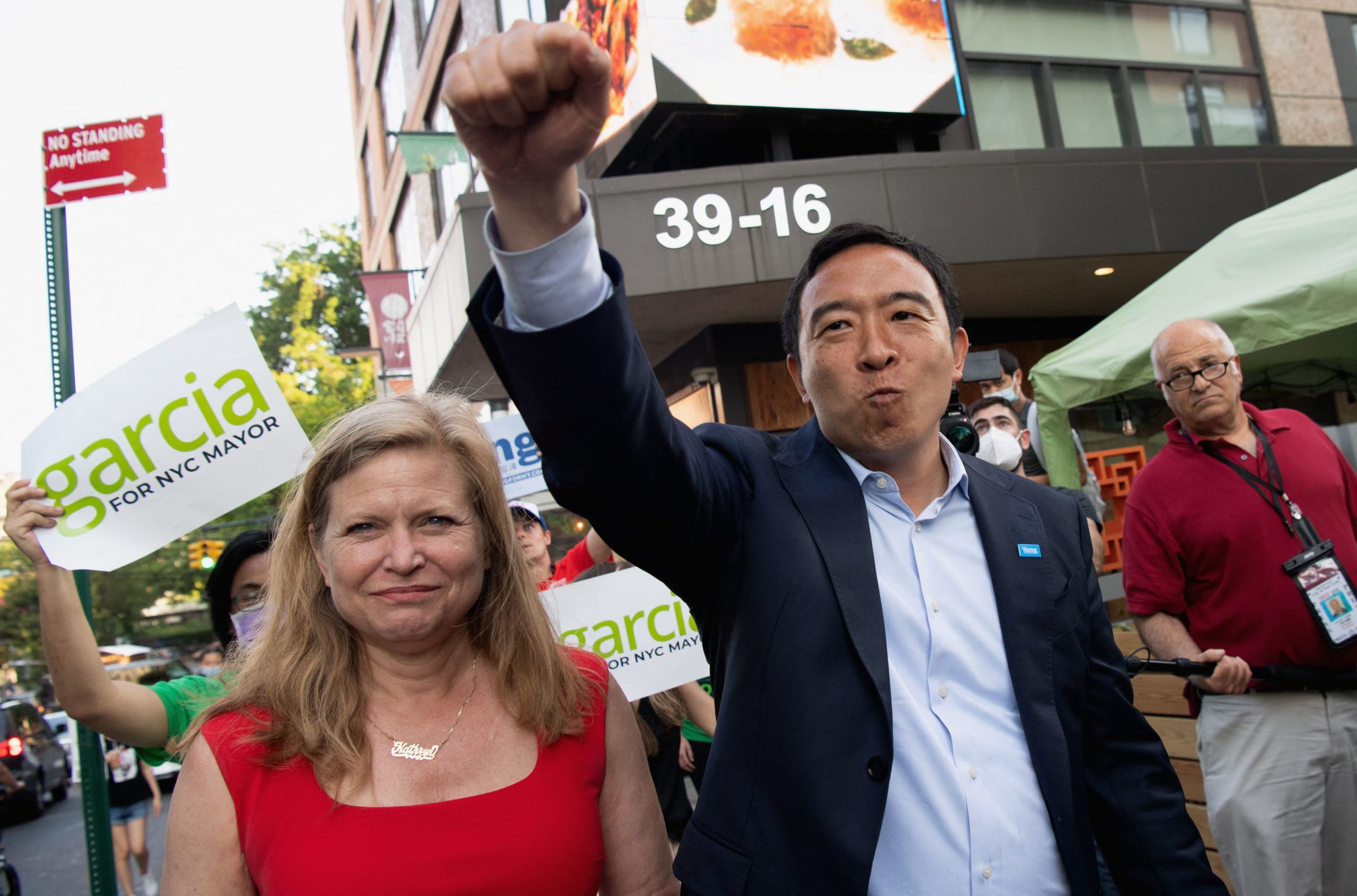 Kathryn Garcia and Andrew Yang campaign in Queens on the eve of Tuesday’s primary. (ANGELA WEISS/AFP via Getty Images)

In response, Adams baselessly suggested that their alliance was an attempt to suppress votes from people of color, and warned that their efforts to “steal” the election from him would not be successful.

His comments were rebuked by Wiley, the most progressive of the top four candidates who has received endorsements from prominent figures including the Working Families Party, Massachusetts Sen. Elizabeth Warren and New York Rep. Alexandria Ocasio-Cortez.

“These accusations are a weaponization of real fears and concerns about our democracy, and have no place here,” Wiley said in a statement Sunday. “Ranked Choice Voting protects the voice of Black and brown voters … [It] – or alliances formed from it – is not voter suppression, it’s not a poll tax and to compare it to that denigrates the work of so many who have come before us.”

Though the eventual Democratic nominee will face one of two Republicans also vying to be mayor, any Democrat would enter November’s general election as the overwhelming favorite in New York City.