Legacy media misrepresents the Catholic faith in its defense of President Joe Biden, pitting “conservative” bishops against the pope and accusing the bishops of politicizing Catholic teaching on the reception of the Eucharist.

Biden’s Catholicism, often praised by the media as “devout,” has become a media focal point as Catholic bishops discuss whether they should deny him and other pro-abortion politicians Holy Communion for their pro-abortion stances. The Catholic Church teaches that the Eucharist is the body and blood of Jesus Christ, and that to receive the Eucharist, one must be in “a state of grace” obtained by confessing any serious sins in the sacrament of confession.

The United States Conference of Catholic Bishops (USCCB) overwhelmingly approved a measure Friday to draft a statement discussing whether high profile pro-abortion politicians, such as Biden and Speaker of the House Nancy Pelosi, may be denied communion, since the Church teaches that publicly advocating for or supporting abortion is a sin of scandal.

“The doctrine committee of the bishops’ conference will now begin drafting this document and, in the months ahead, the bishops will continue our prayer and discernment through a series of regional meetings and consultations,” USCCB president Archbishop José H. Gomez said in a Monday statement. “In November, the bishops will gather to discuss the document draft.”

News of the bishops’ discussions quickly aroused the ire of Democrats Friday afternoon. Sixty Catholic Democrats issued a statement accusing the bishops of weaponizing the Eucharist, and Democratic California Rep. Ted Lieu publicly challenged the bishops to deny him communion.

Legacy media outlets also jumped to Biden’s defense, not only defending his Catholicism but also suggesting that the bishops’ discussions are headed towards a change in Catholic teaching.

The Elusive ‘Warning From The Vatican’

The New York Times, The Washington Post, Vox and multiple other outlets published stories saying that the bishops were “flouting a warning from the Vatican” — a warning not to reprimand Biden for his pro-abortion stances.

The allegation that the Vatican warned the bishops appears to stem from a May letter in which the Vatican’s Prefect of the Congregation for the Doctrine of the Faith, Cardinal Luis Ladaria, warned the archbishops to approach public discussion of the matter with caution.

Any new policy “requires that dialogue occurs in two stages: first among the bishops themselves, and then between bishops and Catholic pro-choice politicians within their jurisdictions,” Ladaria wrote, according to the Catholic News Service. 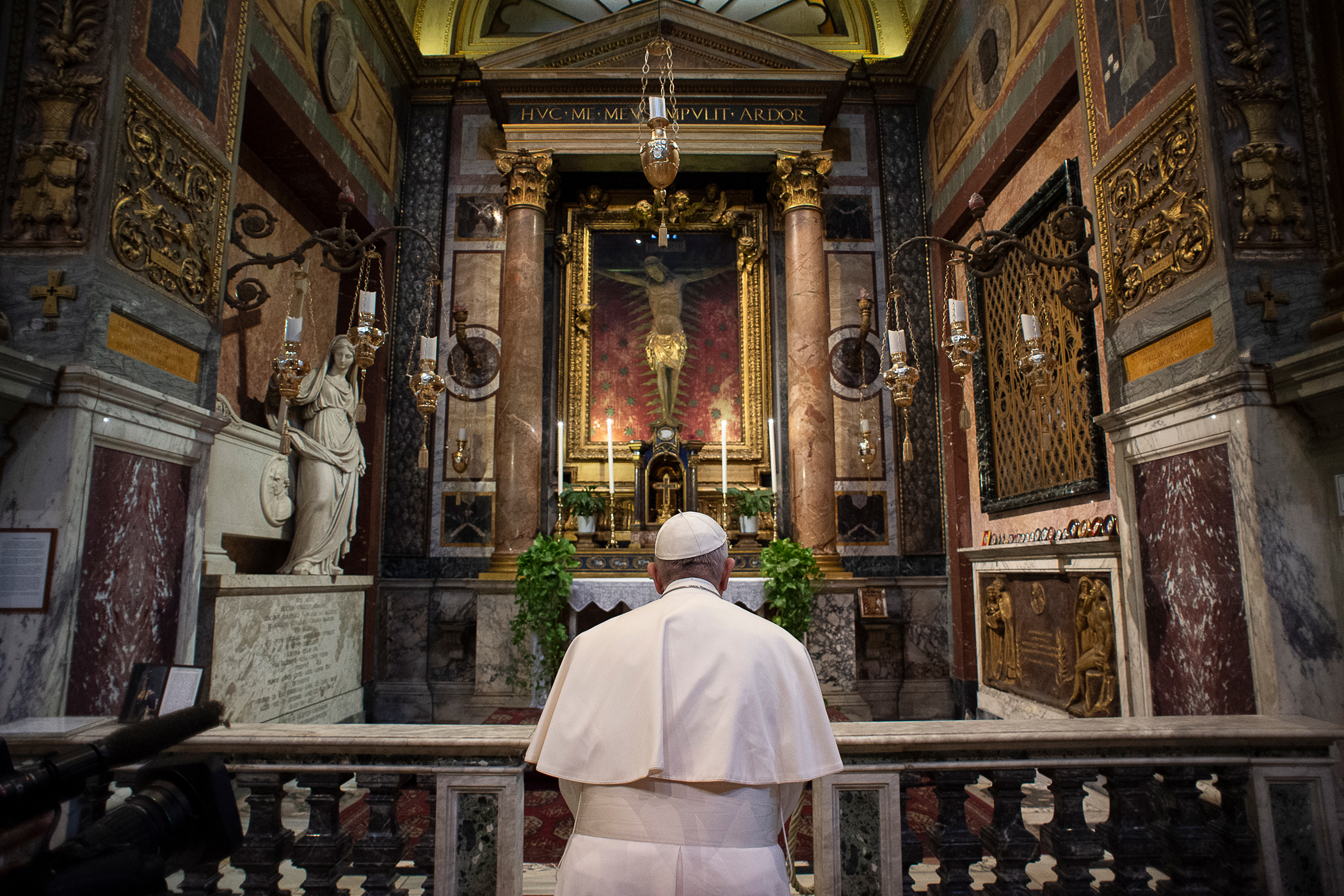 TOPSHOT – This handout picture released by the Vatican Media shows Pope Francis, in Rome on March 15, 2020, prays in S. Marcello al Corso church, where there is a miraculous crucifix that in 1552 was carried in a procession around Rome to stop the great plague. (Photo by -/VATICAN MEDIA/AFP via Getty Images)

Media reporting on Ladaria’s statement has framed the letter as an admonishment from the Vatican, though Ladaria explicitly wrote that the conference had an obligation to oppose pro-abortion laws: “The bishops should affirm as a Conference that ‘those who are directly involved in lawmaking bodies have a grave and clear obligation to oppose any law that attacks human life.”

Earlier last week, the Times published a story claiming with little to no sourcing, except one comment from a reported close ally to the pope, that the Vatican was warning bishops to “hit the brakes” on discussions to deny Biden communion. The publication repeatedly cited this story, “Vatican Warns U.S. Bishops: Don’t Deny Biden Communion Over Abortion,” as evidence that the Vatican warned the bishops not to reprimand Biden.

There is no public statement from Pope Francis telling the bishops to halt the discussions. The Catholic News Agency reported that the Biden team requested last week that the president attend Mass with the pope — a request the Vatican reportedly denied in light of current controversy over Biden’s reception of Holy Communion.

The White House did not address whether this report is true to the Daily Caller News Foundation, though a White House spokesman denied a separate report to the DCNF that the Vatican had canceled a meeting between the Holy Father and the president.

The Times continuously refers to priests and bishops who criticized Biden’s abortion stances as “heroes of the Catholic Right,” “conservative,” and “right-wing” — though these clergy are citing established Catholic Church teaching.

The publication also emphasized that “conservative” bishops are driving the move to deny Biden communion, framing the controversy as political and pitting Pope Francis’ “agenda” against the bishops, and pointed out that the pope has not commented on the current uproar over Biden and the Eucharist.

The publication reported that the “conservative American bishops” are so far from Francis’s agenda that there is nothing for the pope to say, and Times faith and politics reporter Elizabeth Dias wrote that the bishops’ decision “reveals a uniquely American Catholicism increasingly at odds with Rome and Pope Francis.”

But the bishops’ discussion deals with the president’s public support for abortion, which the Catholic Church, and Pope Francis himself, condemns. (RELATED: Here’s How Joe Biden Has Evolved On Abortion As He Attempts To Become President)

The bishops have repeatedly said that though the Catholic Church neither participates in partisan politics nor identifies with a particular political party, Catholic leaders “cannot stay silent when nearly a million unborn lives are being cast aside in our country year after year through abortion.”

“Let the abortion and killing of innocent lives end,” Pope Francis said at Easter. “May the hearts of those who have enough be open to filling the empty hands of those who do not have the bare necessities.”

The USCCB has previously warned that Catholics in politics “have an obligation in conscience to work toward correcting morally defective laws, lest they be guilty of cooperating in evil and in sinning against the common good.” 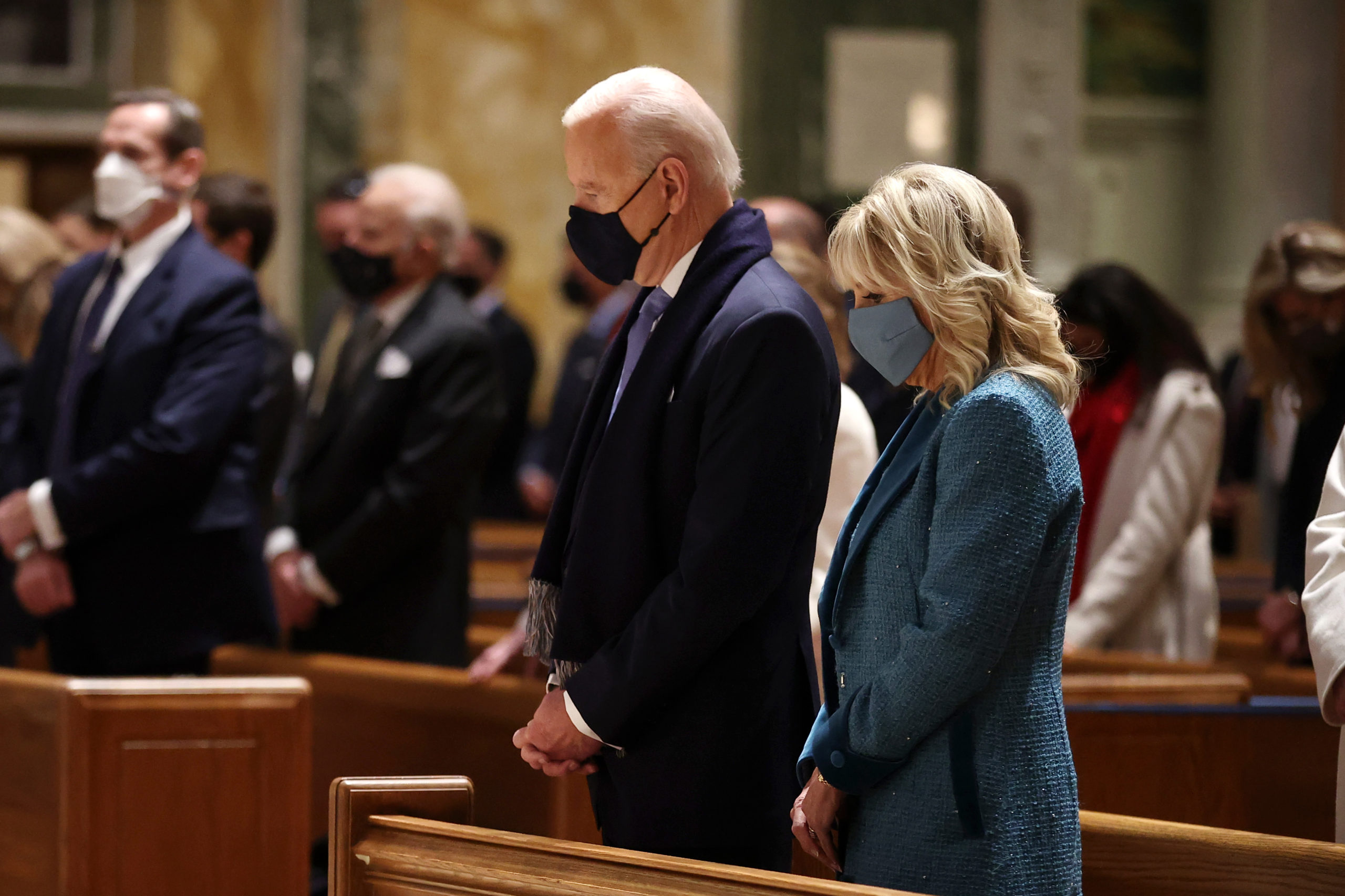 Catholics who “obstinately” persevere in “manifest grave sin are not to be admitted to holy communion,” according to Canon 915 of the Church’s Code of Canon Law. In a 2004 memo, former Pope Benedict XVI (known as Cardinal Joseph Ratzinger at the time) wrote that Catholic politicians who are “consistently campaigning and voting for permissive abortion and euthanasia laws” should be viewed as publicly cooperating in sin.

“Regarding the grave sin of abortion or euthanasia, when a person’s formal cooperation becomes manifest (understood, in the case of a Catholic politician, as his consistently campaigning and voting for permissive abortion and euthanasia laws), his Pastor should meet with him, instructing him about the Church’s teaching, informing him that he is not to present himself for Holy Communion until he brings to an end the objective situation of sin, and warning him that he will otherwise be denied the Eucharist,” the former pope wrote, adding that if the person ignores these precautions and attempts to take communion anyways, the minister should “refuse to distribute it.”

Despite clear Catholic Church teaching on the Eucharist and on abortion, legacy media outlets suggest that “conservative” bishops wish to “rethink” the “rules” on the Eucharist.

The headline widely misinterprets both the goal and the result of the bishops’ discussions: on Friday, the bishops approved a measure to draft a statement on pro-abortion politicians receiving the Eucharist. The statement will not “rethink Communion rules” but will examine the “meaning of the Eucharist in the life of the church.”

In their defenses of Biden’s faith, outlets like the New York Times, Politico, CNN, and Vox described Biden as “perhaps the most religiously observant commander in chief since Jimmy Carter” (NYT), “an observant Catholic who regularly attends Mass” (VOX), and “a deeply religious man” (Politico).

Why Are Media So Loyal To ‘Devout’ Catholic Biden?

An examination by the DCNF previously found that major media outlets and reporters frequently celebrate Biden’s Catholicism as “devout” without noting the significance of his divergence from Catholic teaching. Yet outlets and reporters also criticized the Catholicism of Supreme Court Justice Amy Coney Barrett for her adherence to certain Catholic principles. (RELATED: Media Outlets Link Catholic Group Associated With Amy Coney Barrett To ‘The Handmaid’s Tale’)

Professor Patrick Deneen previously told the DCNF that Catholics who follow traditional Catholic teaching are viewed as “the enemy of the regime” whose faith represents “a hostile threat, a view of Catholicism that has remained consistent since the arrival of Catholics in the Protestant new world.”

“The faith of an Amy Coney Barrett must be vilified and denounced as outside the pale, unacceptable to the regime,” Deneen said. “In effect, they must be ostracized, excluded, defeated, even suppressed.”

Those who call Biden a “devout Catholic” may do so in attempts to suggest that “Catholicism is indistinguishable” from liberal ideology, Dr. Chad Pecknold previously told the DCNF.

“When a U.S. President cloaks himself in the outward signs of Catholic identity in order to expand access to abortion, or to use executive power to enforce a gender ideology that will inevitably threaten the freedom of the Church in this country, what you have before you is a Trojan Horse,” said Pecknold, an associate professor of Theology at the Catholic University of America.

Earlier in his career, Biden frequently referenced his faith as a reason for his pro-life votes in the Senate, but he has since changed his abortion stances and today champions almost unlimited abortion access. His stances prompted a priest to deny him the Eucharist in October 2019. (RELATED: Here’s How Joe Biden Has Evolved On Abortion As He Attempts To Become President)

“The greatest triumph over the Catholic Faith for the Liberal is not in burning Catholics at the stakes, but ensuring that they come to believe that their Catholicism is indistinguishable from liberal pieties,” Pecknold previously told the DCNF.

“As Joe Biden enacts law after law, executive order after executive order, the false impression will be given that liberal laws enjoy a kind of Catholic imprimatur,” he added, “and that is the prize that Democrats all in government and all across the media seek.”