The Republican Study Committee is urging the GOP to “lean into the culture war” as a “winning” issue, according to an internal strategy memo obtained by the Daily Caller News Foundation.

RSC Chairman Jim Banks sent the memo Thursday to approximately 154 Republicans urging his colleagues to fight back against the ideology of Critical Race Theory (CRT) and the “racial essentialism” that it teaches. Banks wrote that Republicans believe “individuals should be judged based on the contents of their character, not their skin,” and that America’s institution should be “colorblind, just as our Constitution is colorblind.”

“Here’s the good news,” the RSC chairman told his colleagues. “We are winning.” (RELATED: A Parent-Led Rebellion Against Critical Race Theory Is Storming School Boards Across The Country)

“My encouragement to you is lean into it,” Banks said, citing polling showing only a small fraction of Americans want their children being taught CRT. “Lean into the culture war.”

The congressman emphasized that backlash against CRT is “real,” pointing to the parent-led rebellion rising against CRT across the country. At least 165 local and national groups have formed to combat CRT instruction in schools across the U.S., an NBC analysis found. 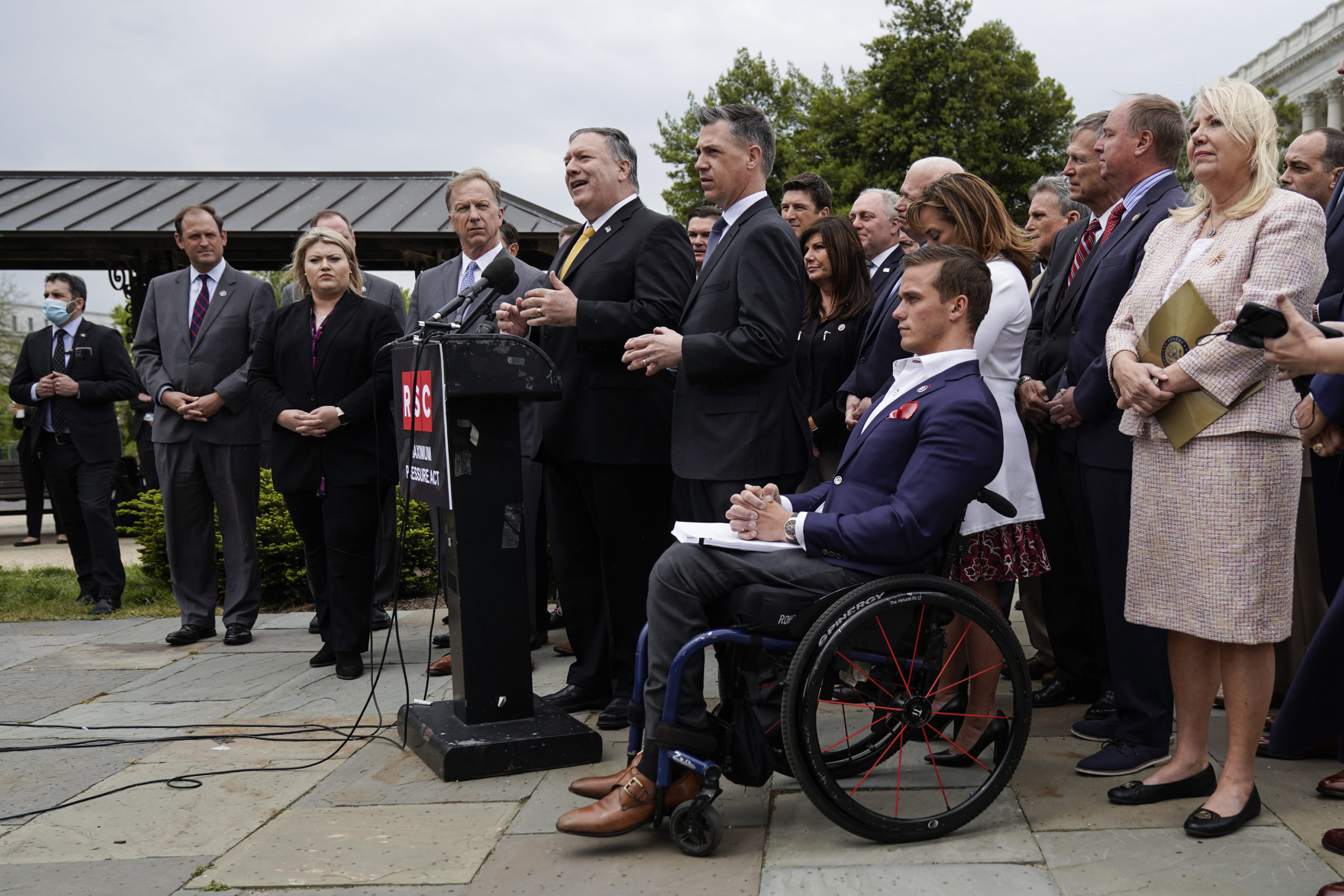 Former Secretary of State Mike Pompeo speaks to the media with members of the Republican Study Committee about Iran on April 21, 2021 in Washington, DC. The group has proposed legislation that would expand sanctions on Iran and aim to prevent the U.S. reentering the Iran deal. (Joshua Roberts/Getty Images)

“We are beginning to see an organic movement from parents across the country in places like Loudon County, VA, Pelham, NY, South Lake, TX, and Bloomington, IL who are fed up with the lessons their kids are being taught,” Banks told RSC members. “As House conservatives, we should be sending a signal to these concerned parents: We have your back.”

CRT holds that America is fundamentally racist, yet it teaches people to view every social interaction and person in terms of race. Its adherents pursue “antiracism” through the end of merit, objective truth and the adoption of race-based policies. (RELATED: Liberal Activists Rebrand Sex Changes As ‘Gender-Affirming Medical Care’ To Bully State Officials Into Allowing The Mutilation Of Children)

Pro-CRT media and activists frequently say the divisive theory is not being taught in schools, but countless examples show its principles in the classroom, identifiable through buzzwords such as “systemic racism,” “racial equity,” “anti-racism,” or “implicit bias.”

In Oregon, Seattle Public Schools reportedly held a training  for white teachers to learn how to “bankrupt their privilege” and understand the “centrality of whiteness” in society. In Virginia, former parents and staff of Loudoun County Public Schools formed a group called “Anti-Racist Parents of Loudoun County,” compiling long lists of parents suspected of disagreeing with the school’s progressive agenda.

In a letter published by a Columbia University professor, an unnamed student who allegedly attended middle school at New York’s Dwight-Englewood School described how his teacher “taught us for the first two weeks about pretty much how awful white men are,” adding “those teachings made me feel like horse shit.”

The group Parents Defending Education released documents earlier this month showing that the leaders at Massachusetts’ Wellesley Public School have been pushing both teachers and students to report on one another for “incidents of bias” or “any concerning pattern of biased behavior,” the National Review reported.

Included in the documents are the school policy on “Responding to Incidents of Bias or Discrimination” as well as slides from a staff equity training course, according to the publication. The school suggested disciplining students who violate the policy through “detention, suspension, or other restorative responses that require them to acknowledge their responsibility and minimize its impact.”

One mother who fled communist China highlighted similarities between China’s class propaganda and the way in which students and teachers are encouraged to report on one another for CRT infractions during a Loudoun County school board meeting in June.

“During the cultural revolution, I witnessed students and teachers turn against each other,” she said. “We changed school names to be politically correct. We were taught to denounce our heritage. The Red Guards destroyed anything that is not communist: oaths, statues, books, and anything else.”

“We are also encouraged to report on each other just like the student equity ambassador program and the bias reporting system,” she continued. “This is indeed the American version of the Chinese cultural revolution. Critical Race Theory has its roots in cultural Marxism. It should have no place in our schools.”