A hammer thrower turned away from the American flag and covered her head with a T-shirt that read “Activist Athlete” when the national anthem was playing during the Saturday U.S. Olympic track and field trials.

Gwen Berry, 31, qualified for the Olympic Games in Tokyo, having placed third on Saturday. On the podium, Berry took a quarter turn to face the stands, while the event’s winner DeAnna Price and the second-place finisher Brooke Andersen stood facing the flag, ESPN reported.

We’re going to see more of this. It’s going to make patriotic Americans cheer for foreign competitors and against the anti-American Americans.

Hammer thrower Gwen Berry turns away from flag while anthem plays at trials – ‘I feel like it was a set-up’ https://t.co/TnIFwzy5Fh

When the “Star-Spangled Banner” played, Berry put her left hand on her hip and shuffled her feet. Towards the end of the anthem, the Olympian put a shirt with the words “Activist Athlete” over her head, according to ESPN. (RELATED: Transgender Olympian Wants To Burn US Flag On The Podium)

“I feel like it was a set-up, and they did it on purpose,” Berry complained about a 5-minute delay, which resulted in the anthem coinciding with her being on the podium. “I was pissed, to be honest.” 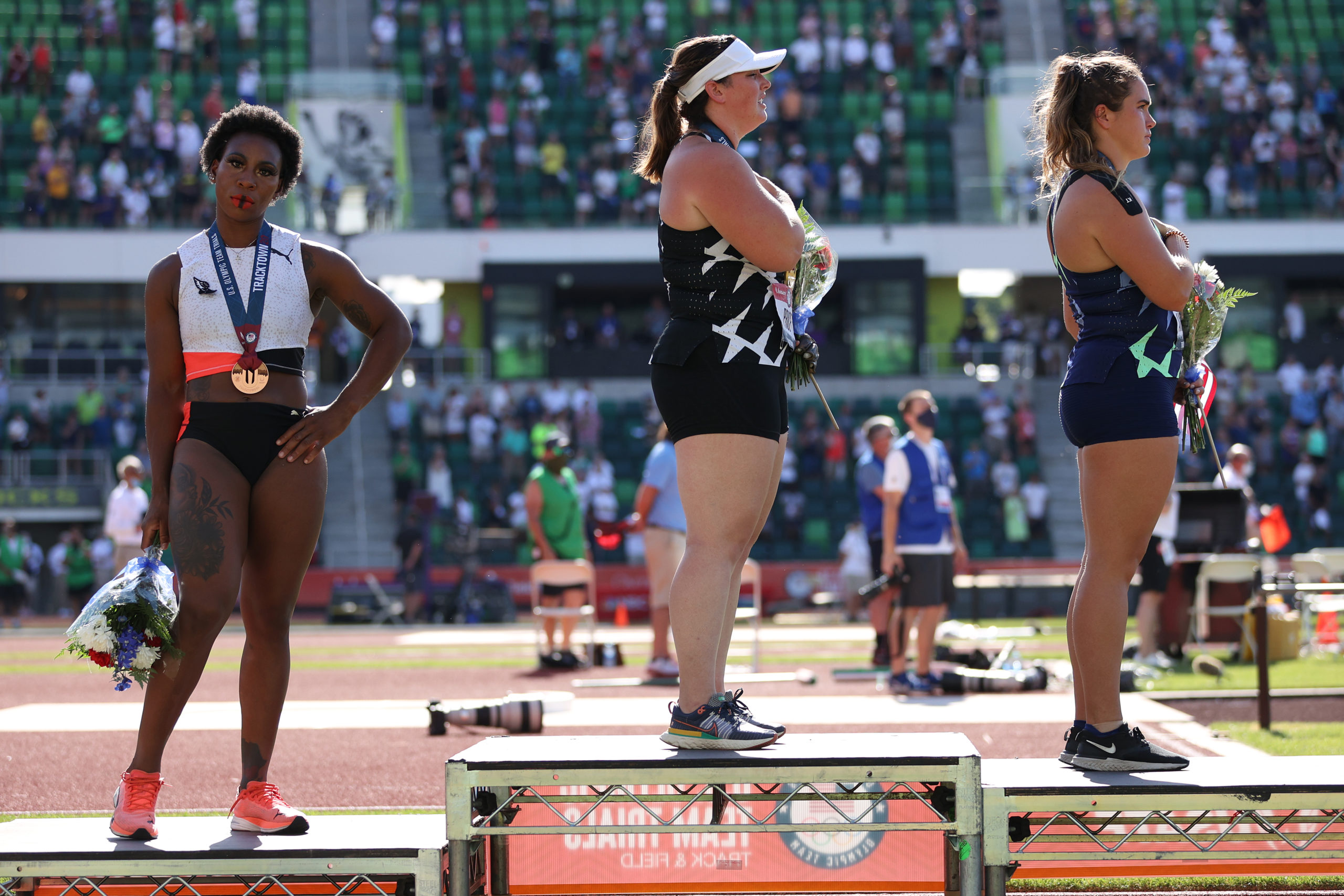 EUGENE, OREGON – JUNE 26: Gwendolyn Berry (L), third place, turns away from U.S. flag during the U.S. National Anthem as DeAnna Price (C), first place, and Brooke Andersen, second place, also stand on the podium after the Women’s Hammer Throw final on day nine of the 2020 U.S. Olympic Track & Field Team Trials at Hayward Field on June 26, 2021 in Eugene, Oregon. In 2019, the USOPC reprimanded Berry after her demonstration on the podium at the Lima Pan-American Games. (Photo by Patrick Smith/Getty Images)

“I really don’t want to talk about the anthem because that’s not important. The anthem doesn’t speak for me. It never has,” Berry added.

“The national anthem was scheduled to play at 5:20 p.m. today,” USA Track and Field spokeswoman Susan Hazzard said Saturday, according to ESPN.

“We didn’t wait until the athletes were on the podium for the hammer throw awards. The national anthem is played every day according to a previously published schedule,” Hazzard said.

On Saturday, the music reportedly started at 5:25, which spurred Berry’s protest.

Stop playing with me pic.twitter.com/WLN3clqOCM

Berry tweeted the photo of her protest Sunday, captioning it, “Stop playing with me.”

The athlete has previously pledged to use her position at the Olympics in Tokyo to raise awareness about social injustices in the U.S., according to The Hill.