As the U.S. carries out its planned withdrawal from Afghanistan, the Taliban continues its encroachment of bases, check posts, districts, and towns across the land-locked Central Asian nation. The insurgents have seized several key areas in recent days.

Taliban militants captured the key Imam Sahib district in the Kunduz province, Afghan police said, according to France 24. The conquest places them closer to taking the provincial capital, Kunduz, in their “swift” offensive in Northern Afghanistan, according to The New York Times. Roughly 5,000 Afghan families have escaped from their homes in Kunduz, Afghan officials said Saturday, according to Al Jazeera.

Seeing shocking reports from Andkhoy District of #Faryab. The Taliban’s burning of shops & govt buildings, detaining of people, & destruction of infrastructure & communication networks demonstrates their extremism & their disregard for the human rights of the Afghan people.- IM

West of Kunduz, Taliban militants have managed to come up to the entrance of Maimana, the capital of Faryab Province, before retreating to its edge, the Times reported. The insurgents reached thus far after an intense fight with Afghan forces over the preceding days for control of districts surrounding the city. The battle saw the killing of over 20 elite Afghan soldiers and the surrender of “dozens” of soldiers who ran out of ammunition, the outlet reported.

The U.S. exit amid such disorder raises questions about the condition Afghanistan will be left in by Biden’s 9/11 deadline for the withdrawal and the future of the country.

Under President Joe Biden, the U.S. has now reached over 50% of its withdrawal process, according to a U.S. Central Command’s (CENTCOM) update. About 763 “C-17 loads” of goods have been moved out of Afghanistan, and the Defense Logistics Agency received about 14,790 pieces of equipment for “disposition.”

Update on the #ResponsibleExit of U.S. forces from Afghanistan June 22, 2021https://t.co/x43pAfJ8jP

The U.S. intelligence community reportedly believes the reigns of the Afghan government could fall into the hands of the Taliban in as soon as six months post-withdrawal.

The Taliban, an Islamist militant movement that arose from the chaos following the Soviet withdrawal from the country in the 80s, ruled Afghanistan from 1996 to 2001 as the “Islamic Emirate of Afghanistan” until the U.S. and its NATO allies deposed it in Operation Enduring Freedom.

Since then, after regrouping as insurgents, the Taliban has conducted guerilla warfare and terrorist attacks in Afghanistan to achieve its goals of restoring the “Islamic Emirate.” The Taliban wants an “Afghan-inclusive Islamic system” to replace the country’s current democratic regime, which the U.S. helped to set up.

The Taliban has stepped up attacks in Afghanistan ever since the U.S. under President Donald Trump agreed to withdraw in February 2020, according to NBC News. Since Biden’s announcement, the Taliban has seized over 30 districts in the country, Reuters reported. (RELATED: Afghan Forces Begin To Collapse, Surrender To Taliban Amid US Withdrawal)

Data gathered by the Foundation for Defense of Democracies reveal that the Taliban rules around 26% of Afghanistan’s 421 districts. The insurgent group and the Afghan government reportedly contest for roughly 46%, while 21% are either under the control of the Kabul government or are “undetermined.”

Kabul-based journalists Ali Latifi and Hikmat Noori told the Daily Caller that the Taliban has indeed been increasing its attacks throughout 2020, stepping up what Latifi describes as a gradual rise in violence over the last decade.

“Right after the [February 2020] peace deal, there were hopes that [after] the Taliban made a deal with the U.S., things would be better, but surprisingly it has gotten worse,” Noori told the Daily Caller.

“Targeted killing has increased. They’ve been targeting activists, journalists, vaccinators, school teachers, university professors, students, minorities. These attacks have increased in the last one-and-a-half years,” he said. According to his observations, the Afghan government’s release of 5,000 Taliban prisoners under pressure from the Trump administration to fulfill a provision in the February 2020 peace deal played a major role in the “spike in the violence.”

Noori said that many target lists have been circulating on social media with the names of “people, civil society activists, government officials, people working for the education sector” on them. He added that a friend of his who runs a mobile library for children is on one of such lists. 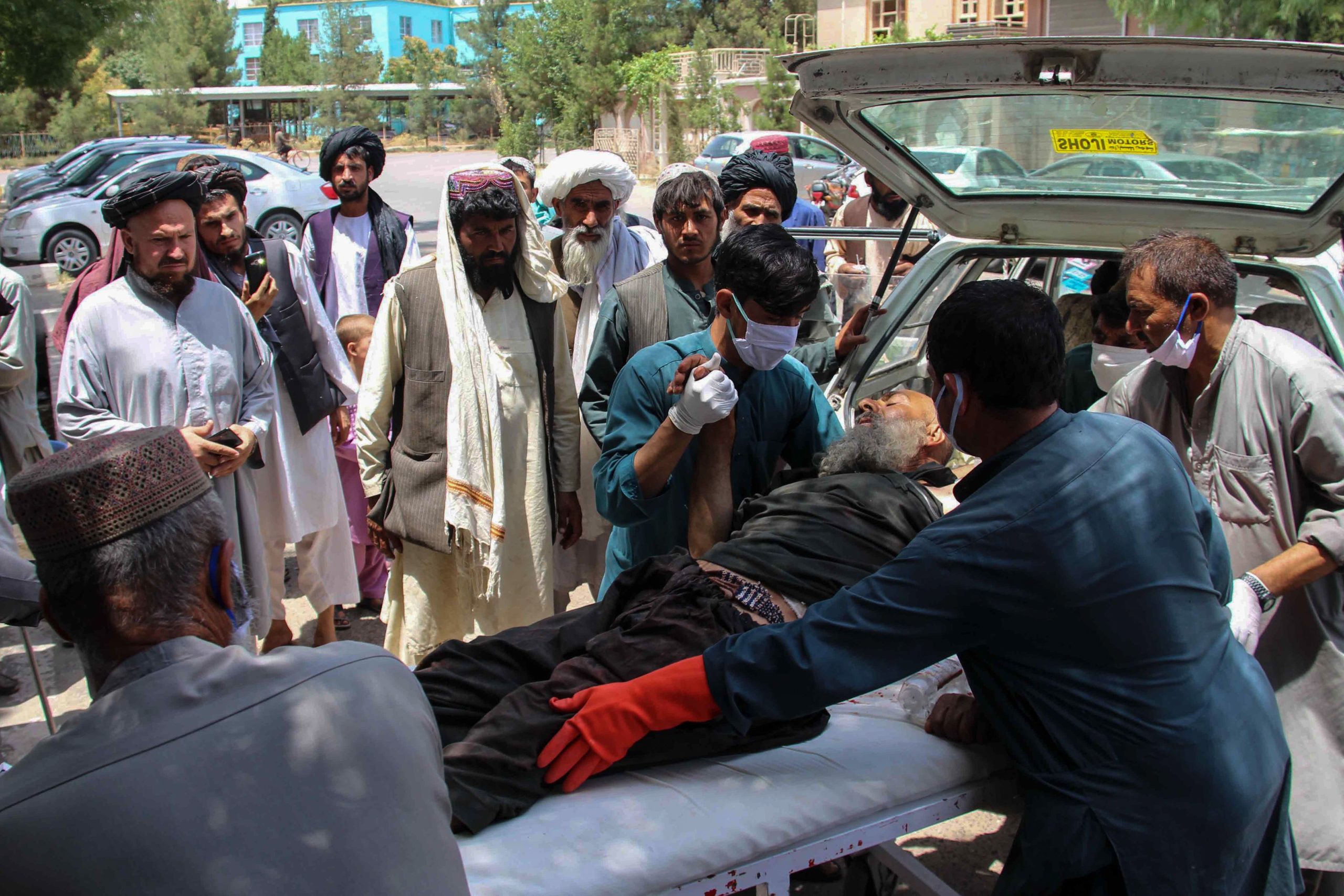 A victim, injured in an explosion at a cattle market in Sangin district, is brought to a hospital in Lashkar Gah city of Helmand province on June 29, 2020, blamed on the Taliban (Photo by NOOR MOHAMMAD/AFP via Getty Images)

Latifi agreed that there was a step-up in violence over the “last year.” However, he told the Daily Caller that it’s inaccurate to put the step-up in attacks entirely in the frame of U.S. withdrawal.

“It’s not as if prior to Biden’s announcement, one day before in April everything was great and then all of a sudden we’re in some kind of dark season,” he said, adding that “[the security situation] hasn’t been good in a long time”—a point Noori also mentioned while speaking to the Daily Caller.

Latifi described to the Daily Caller that the fight between Afghan forces and the Taliban has been like a game of “whack-a-mole.” He explained that the Taliban concentrates on some provinces for a few months, trying to conquer them. In response, the Afghan government pools resources from other places to “fend off that attack,” but then “fires burn in other places.” 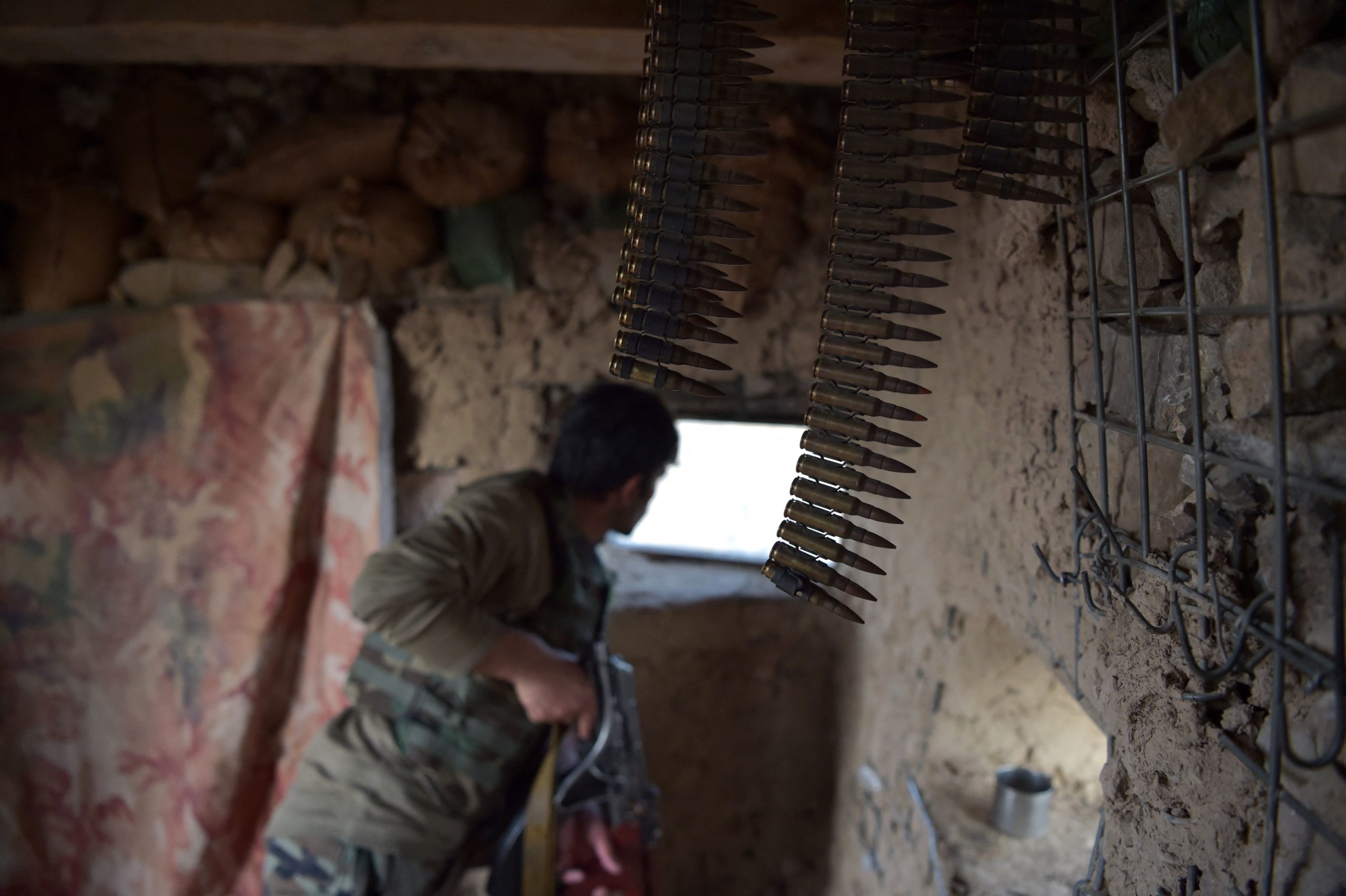 In this photograph taken on March 23, 2021, an Afghan National Army (ANA) soldier keeps watching at an outpost set up against Taliban fighters in Kajaki, northeast of Helmand Province. (Photo by WAKIL KOHSAR/AFP via Getty Images)

When asked about the Afghan government’s preparedness and steps to counter a potential Taliban resurgence before and after the U.S. withdrawal, Noori said that while the government in Kabul has been carrying out offensives and airstrikes supported by NATO allies, their efforts have not “been really successful” because “in the end, civilians also die from these attacks.”

Latifi told the Daily Caller that “[The Afghan government] do[es] say that we’re prepared, we can do this, don’t worry, but they haven’t shown it to the people.”

According to TOLO News, many Afghan civilians are forming militias to resist the Taliban advance. This includes ethnic minority Hazaras who have been forming “self-protection groups,” according to the Times.

Photos: Kapisa residents take up arms to support security forces in the fight against the Taliban in the province. #Afghanistan pic.twitter.com/URfqJbrrpL

“The sense to those who are familiar with what is going on in [government] circles is there wasn’t a plan ahead of time. There seems to be no real plan for what happens on Sep. 12,” Latifi said.

Center for Strategic and International Studies (CSIS) national security analyst Anthony H. Cordesman told the Daily Caller that the problem with Afghanistan is that “the central government is dependent on outside financing” and that it “is a country that can’t pay for its own military, civil government.” 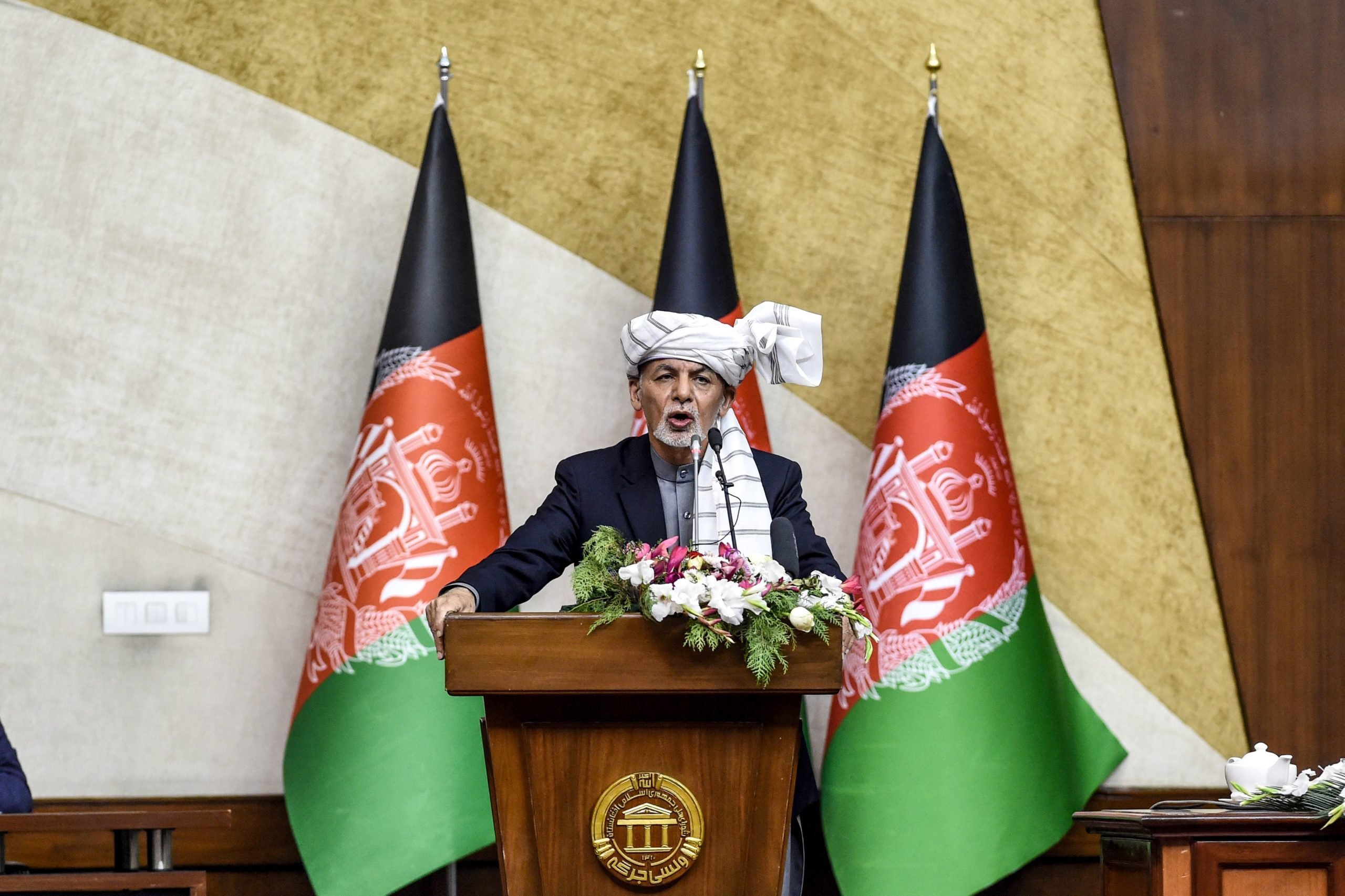 Afghanistan’s President Ashraf Ghani speaks at the Parliament in Kabul on October 21, 2020. (Photo by WAKIL KOHSAR/AFP via Getty Images)

Furthermore, Cordesman said that Afghanistan has “a weak and deeply corrupt government” running the country, affecting its ability to provide necessary services to the people, a point both journalists also mentioned.

“The massive influx of U.S. dollars for assistance programs, construction, and contractors, together with the deeply rooted and extensive narcotics trade, turbocharged corruption” in the country, wrote former Defense Secretary Robert M. Gates in an opinion piece for the Times. “It even extended to Afghan security forces: Promotions were for sale, officers stole troops’ wages and weapons appeared on the black market.”

Exploiting the frustrations many Afghans face with the current system, the Taliban has tried to present its interpretation of the ideal Islamic state as a better alternative to the current regime, Noori said, making what he said were “false promises.” 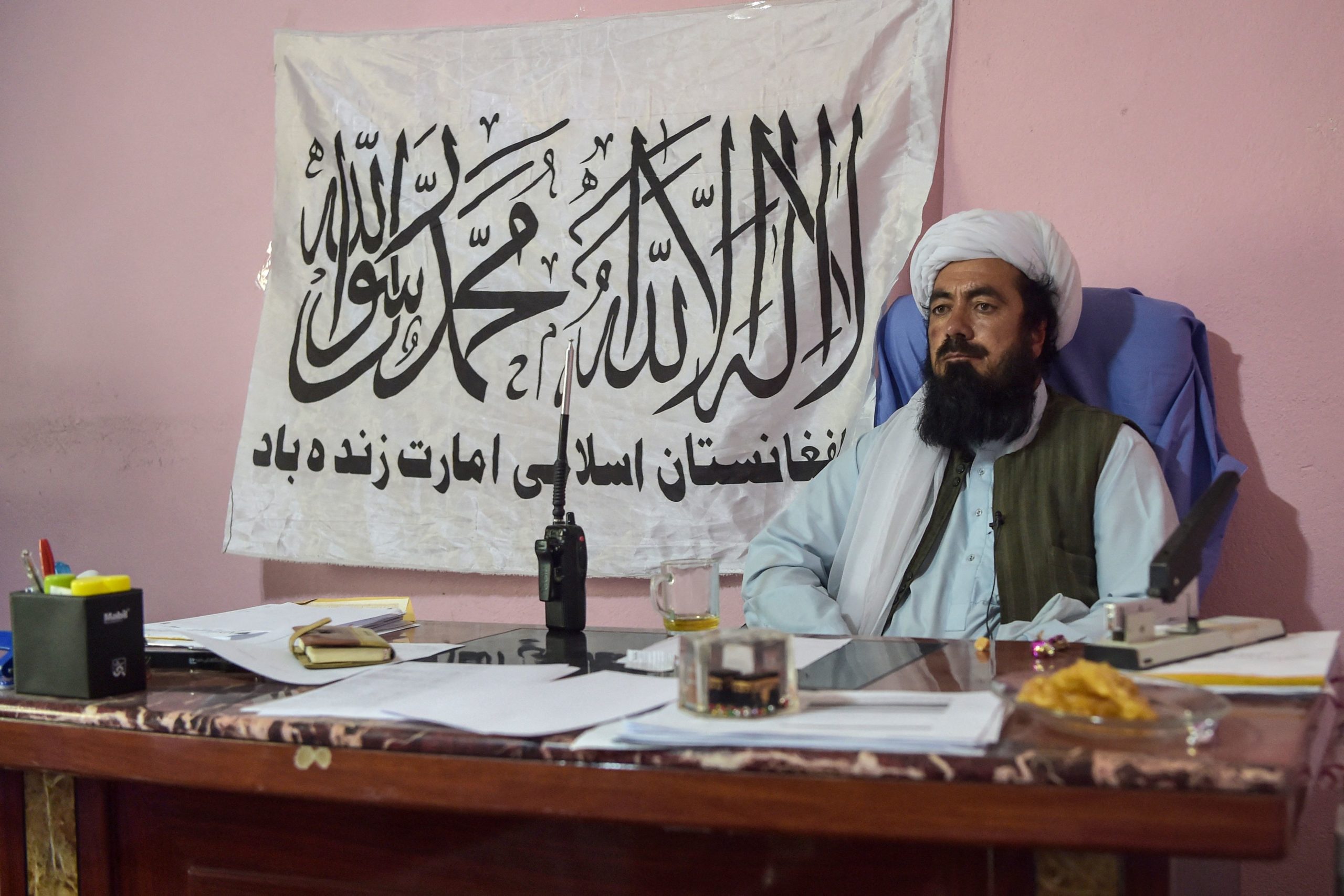 Mullah Misbah, Taliban commander and director of the public health for Ghazni on the Taliban-controlled side, speaks during an interview with AFP. With Afghan troops in retreat and soon to lose vital US air support, Taliban commanders seek to re-establish their version of an Islamic state. (Photo by WAKIL KOHSAR/AFP via Getty Images)

“Do I think the country will slowly emerge into some sort of de facto partition between the pro-government and the pro-Taliban camps? Yes, but that’s kind of what we see today,” Coffey said. “We’re not going to see the Taliban take back power completely any time soon.” 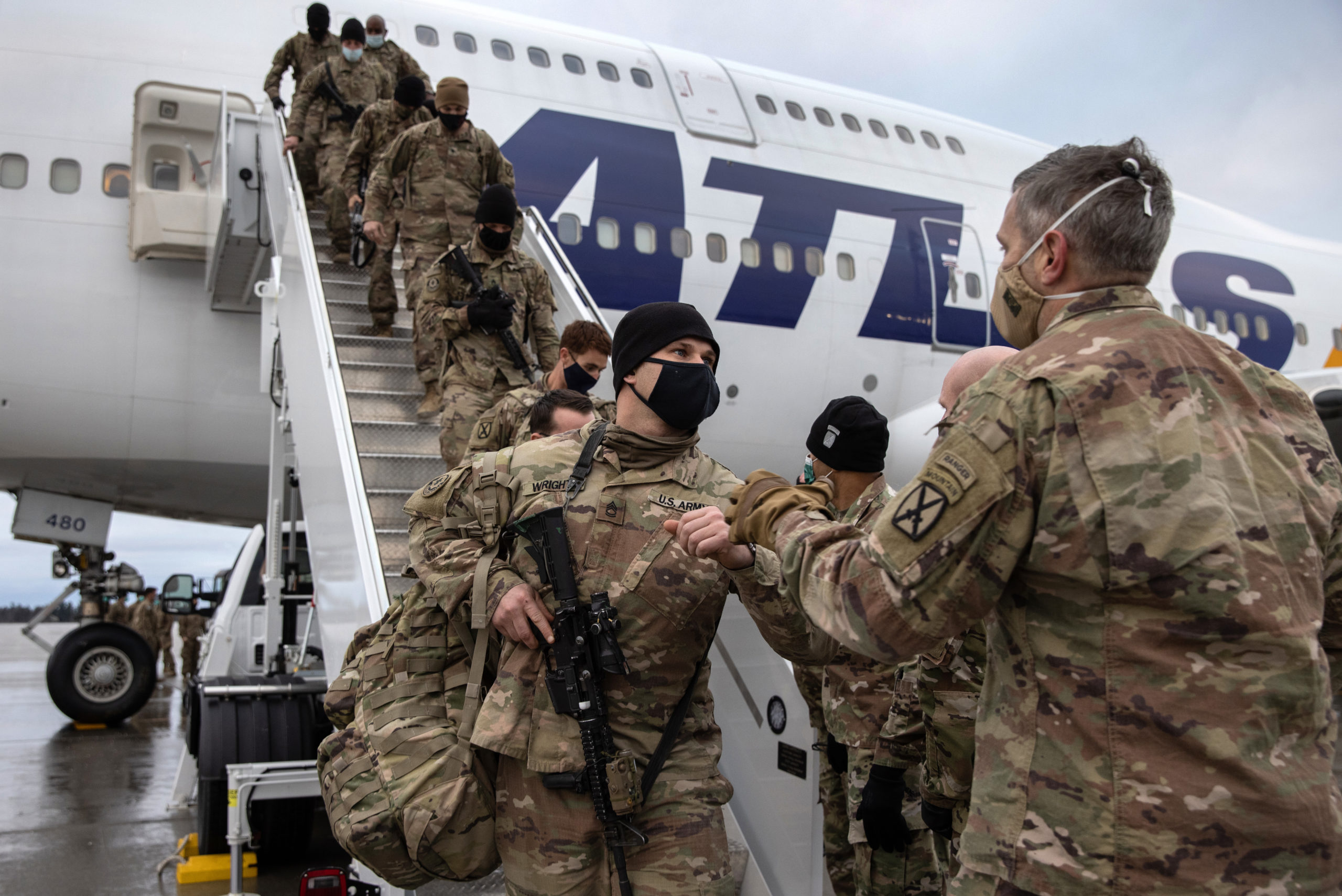 “There is fear and there is trepidation because people don’t know what’s going to happen,” Latifi said. “There’s unease. People who can get out, are trying to find ways to get out” —something Noori also mentioned when he said that “people are leaving in [the] hundreds daily, to at least Iran.”

“I do remember the arrival of the U.S. forces and NATO allies. It did give hope to a lot of people, it did give smile[s] to a lot of people, it gave a lot of freedom to Afghan women because they didn’t have freedom under the Taliban,” Noori said. “There was a lot of hope that now that the Americans are here, they will save us from terrorism. But after 20 years, we do feel betrayed by the U.S. They are leaving us behind.” 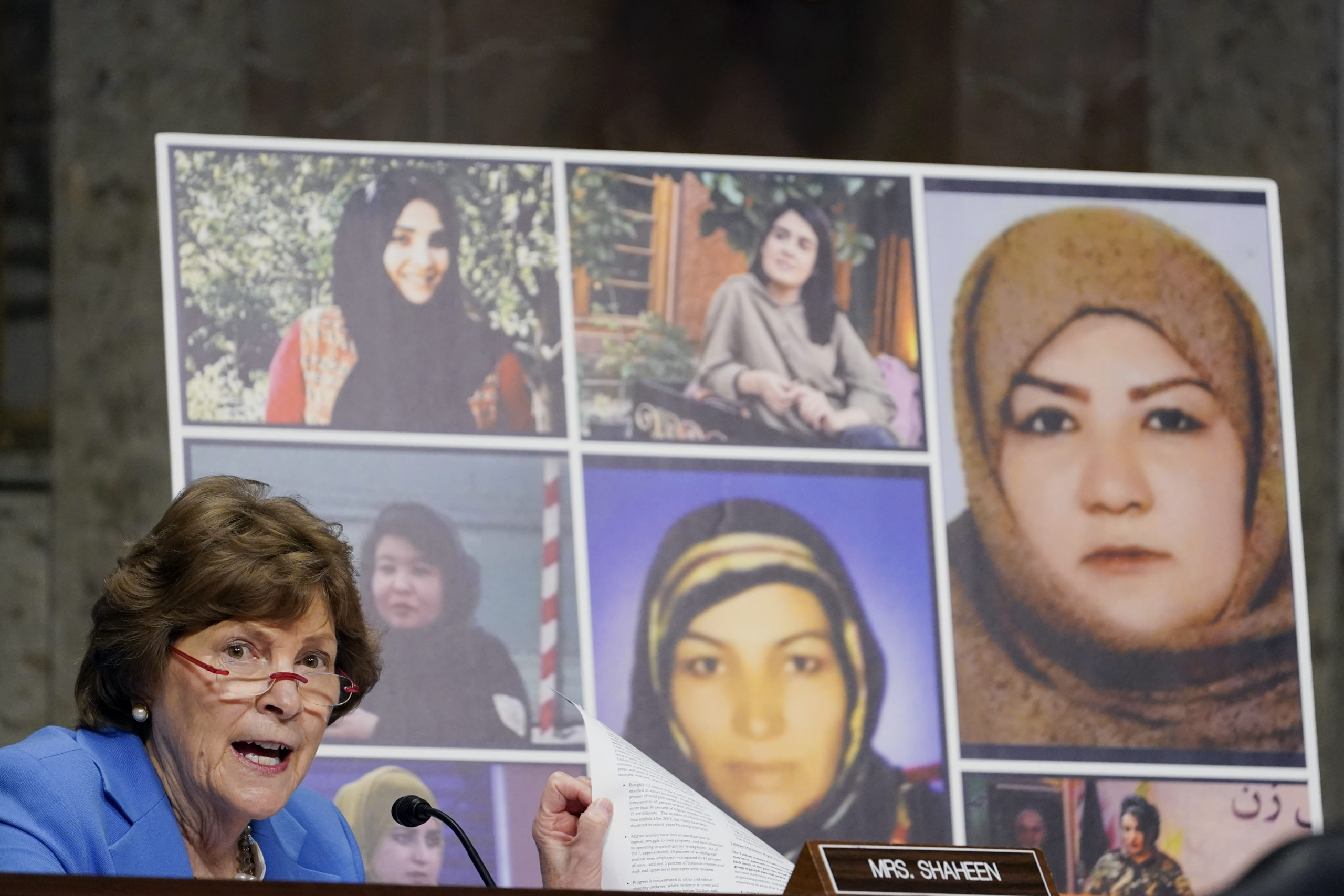 U.S. Sen. Jeanne Shaheen (D-NH) talks about women in Afghanistan, including the seven pictured women who were killed in Afghanistan, as she questions Zalmay Khalilzad, special envoy for Afghanistan Reconciliation, while he testifies before the Senate Foreign Relations Committee on April 27, 2021, in Washington, DC. (Photo by Susan Walsh-Pool/Getty Images)

Despite the issues on the ground, Director of Foreign Policy Studies at the Cato Institute John Glaser told the Daily Caller that he believes it is not in the U.S.’ best interest to remain in Afghanistan. “The war was really lost a long time ago. The delay in withdrawing has really been about the inability of U.S. leaders to withdraw in a way that satisfies them politically,” he said.

“It’s really tragic that policymakers have led us down this road and continued to ignore all the sub costs that have happened, and instead continue to let the costs impose themselves on America, on the military, on our overall foreign policy.”

Glaser said that some people believe there will be a “spike” in the civil war. “But well, it’s already a civil war,” he said. “It might boil over a little bit more once the occupying forces are gone. The reason is that the Taliban insurgency is as strong now as it has ever been.”

An image the Taliban released, saying it is of their militants, through their official network Al-Emarah. (Al Emarah/Media Release)

“Does the mess in the aftermath of withdrawal obligate us to stay longer? The obvious answer is no,” he said. “There will always be a mess after we leave. We can stay there another 20 years and it’s going to be the same thing.”

He further said that in a world where people can communicate over the internet and radio waves, thinking terrorists gather around in some remote area to plan attacks “misunderstands the nature of the terrorist threat.”