An environmentalist organization claims “dozens” of its activists were arrested by Secret Service in front of the White House Monday.

The Sunrise Movement, an organization focused on stopping climate change, brought its members outside the White House Monday demanding more from the infrastructure agreement Democratic President Joe Biden endorsed, according to Yahoo News.

“Whether we’re inside or outside the White House, Biden is going to hear our demands,” a description for the event said on their site.

It’s on. Shutting down the main entrances to the @WhiteHouse with @sunrisemvmt. @POTUS @JoeBiden you can avoid these kind of disruptions by saying #NoClimateNoDeal and following through on your promise to #BuildBackFossilFree & fund the #civilianclimatecorps #NoClimateNoDeal pic.twitter.com/KrrQwKlvtG

Activists chanted “shut it down” as they made a barricade in front of an entrance to the White House, according to Yahoo News. The organization demanded Biden include funding for a “civilian climate corps,” which it says is a government jobs program to combat climate change. (RELATED: EDITORIAL — The Hypocrisy Of This Leftist Group Is Stunning)

“It’s a program organized through the Department of the Interior and Agriculture and aims to conserve and restore public lands and waters, bolster community resilience, increase reforestation, increase carbon sequestration in the agricultural sector, protect biodiversity, improve access to recreation, and address the changing climate,” the group said.

The Sunrise Movement didn’t respond to a request for comment from the Daily Caller News Foundation.

Today we showed up to @JoeBiden’s doorstep with 500+ people and blockaded every entrance to the white house, demanding that he include a fully funded #CivilianClimateCorps in his infrastructure bill.

Secret Service then arrested dozens of us. pic.twitter.com/hpBSrhnhF1

White House press secretary Jen Psaki on Monday denied the group’s claim that the infrastructure bill failed to address climate change. “I would dispute the notion that it doesn’t do anything for climate, which some are arguing,” Psaki said in a press briefing. 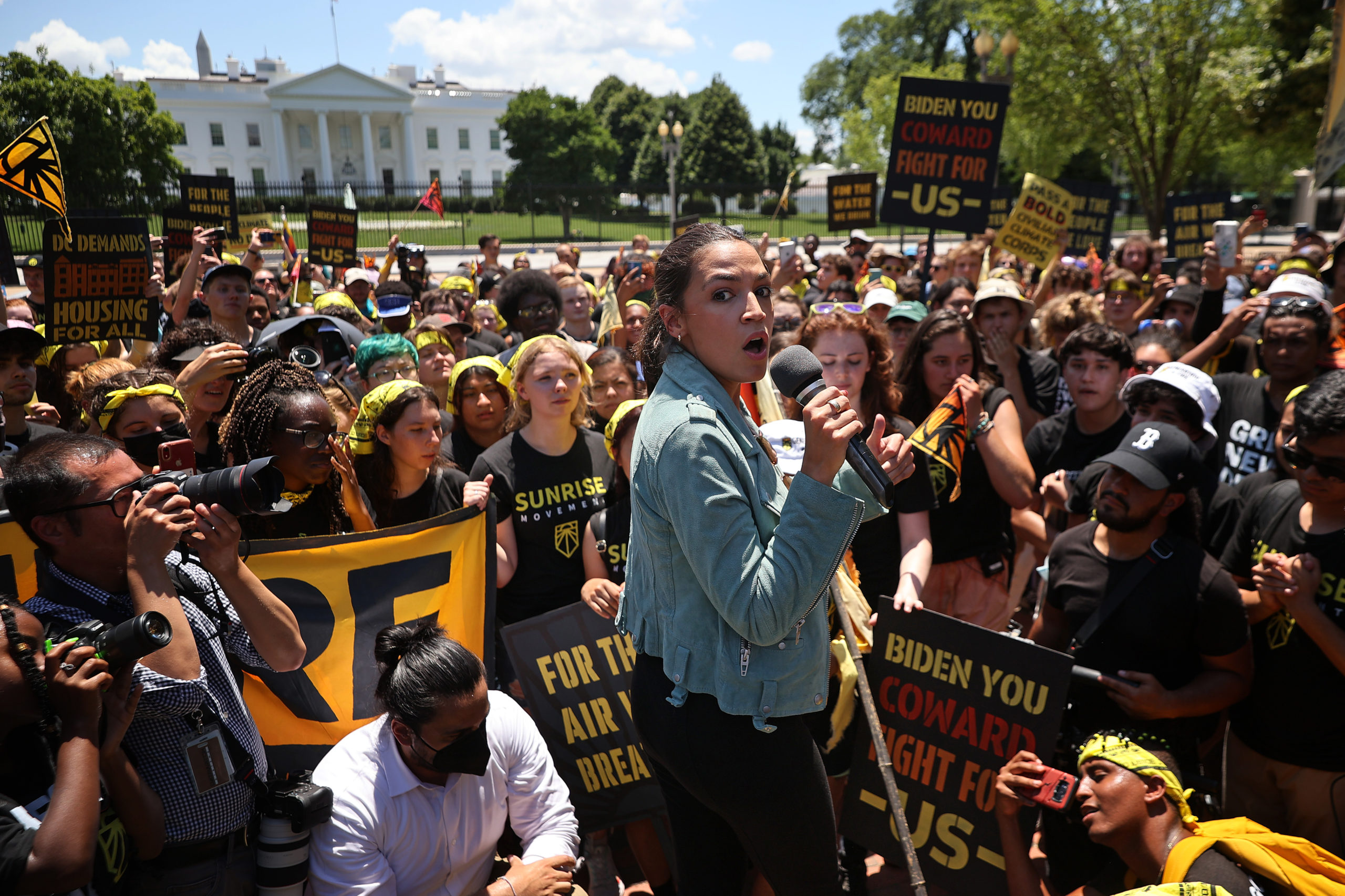 Democratic Rep. Alexandria Ocasio-Cortez rallies hundreds of young climate activists in Lafayette Square on the north side of the White House to demand that U.S. President Joe Biden work to make the Green New Deal into law on June 28, 2021 in Washington, DC. (Photo by Chip Somodevilla/Getty Images)

“They(politicians) occupy our streets. They mass incarcerate us, but they leave us food insecure, in transportation deserts, and our buildings and schools falling apart. Fuck that,” Bowman said demonstrators, according to Yahoo News.

Sunrise Movement’s activists have been arrested at protests multiple times. They were arrested for demonstrating on Republican Texas Sen. Ted Cruz’s property on June 21, and for storming the Russell Senate Office Building in February 2019.

When Cortez was first elected into Congress, she joined protestors from the Sunrise Movement at Democratic House Speaker Nancy Pelosi’s office to support a “Green New Deal” in November 2018.