Violence surged in the U.S. throughout the coronavirus pandemic, but declining police morale and staffing shortages aren’t the only reason why there was an uptick.

The growth of violence in the U.S. doesn’t seem to cut between party lines. Murders in Democrat-controlled cities increased 36.2% in 2020, and the homicide rate in Republican-led cities rose to 35.6% in 2020, according to data analytics reporter Jeff Asher.

Experts have said that there are many more reasons why violence has shot up during the coronavirus pandemic. Police morale and staffing shortages are only one factor that leads to violent crime, Richard Rosenfeld, professor of criminology at the University of Missouri, told the Daily Caller News Foundation (DCNF).

“Reductions in police morale and staffing have almost certainly contributed to the increases in violent crime, but that’s probably not the only explanation for the increases,” Rosenfeld said. “If it were, we’d also have seen increases in nonviolent street crimes, which declined during the pandemic.”

Homicide rates were on the rise even before the riots in May 2020. The FBI reported an almost 15% increase in homicides between January 2020 to June 2020.

However, certain areas like San Francisco have signed softer shoplifting laws which have led to what Brendan Dugan, who leads the retail crime division at CVS Health, called “organized retail crime.” Proposition 47 reclassified nonviolent larceny as a misdemeanor so long as the value of the goods stolen was less than $950, which has encouraged people to shoplift more and restrict employees from stopping the crimes, according to many retail executives, police officers and city officials.

Police morale isn’t the only reason why violence is increasing, John Kleinig, professor of philosophy at John Jay College, told the DCNF. “Lots of other options to look at — the pandemic and its various effects; the large increase in gun sales; opportunities created by the pandemic (more stray targets in subways, etc); economic factors; political polarization. And if you look at the stats, the violence is now declining.”

The coronavirus ripped apart many areas of the U.S., leading to business closures, increased unemployment and a spike in domestic violence in homes.

Law enforcement officers during the pandemic did continue to do many of the same tasks, but in some cases, they were limited due to social distancing constraints, according to Oxygen.

Detectives in the Dallas Police Department’s Crimes Against Persons Division, which investigates homicides, robberies, and assaults, needed to spread working in nine libraries rather than a central location to comply with social distancing guidelines, according to Oxygen.

Sergeant Warren Mitchell told Oxygen the change “has not hindered” the department’s capability to do their tasks but has added an extra barrier to go over when doing investigations.

“Officers are still conducting traffic stops. However, officers are not requiring violators to sign the citation. Instead, officers are documenting COVID-19 in the signature block and making a note of the stop on their body cams,” Mitchell told Oxygen.

Domestic violence did see an increase in spite of overall crime dropping at the beginning of the pandemic, a 2020 study from the American Journal of Criminal Justice found.

The National Domestic Violence Hotline’s contact volume in April 2020 increased by 15% as compared to the previous year, and from March 2020 there was an overall increase of 9% in contact volume in the next 3 months.

1,765 hotline callers reported in the second half of March that their abusive partner was using COVID-19 to “further isolate, coerce, or increase fear in the relationship,” Katie Ray-Jones, CEO of the National Domestic Violence Hotline, told NBC News.

Rosenfeld told Salon in February that COVID-19 did have a “very significant” effect on policing.

“That reduces the kind of so-called smart policing that research shows can help keep violence in check and to reduce it,” Rosenfeld the outlet. “So you have the impact of COVID on policing, in particular on police presence, and police activity in communities hard hit by the uptick in violence.” 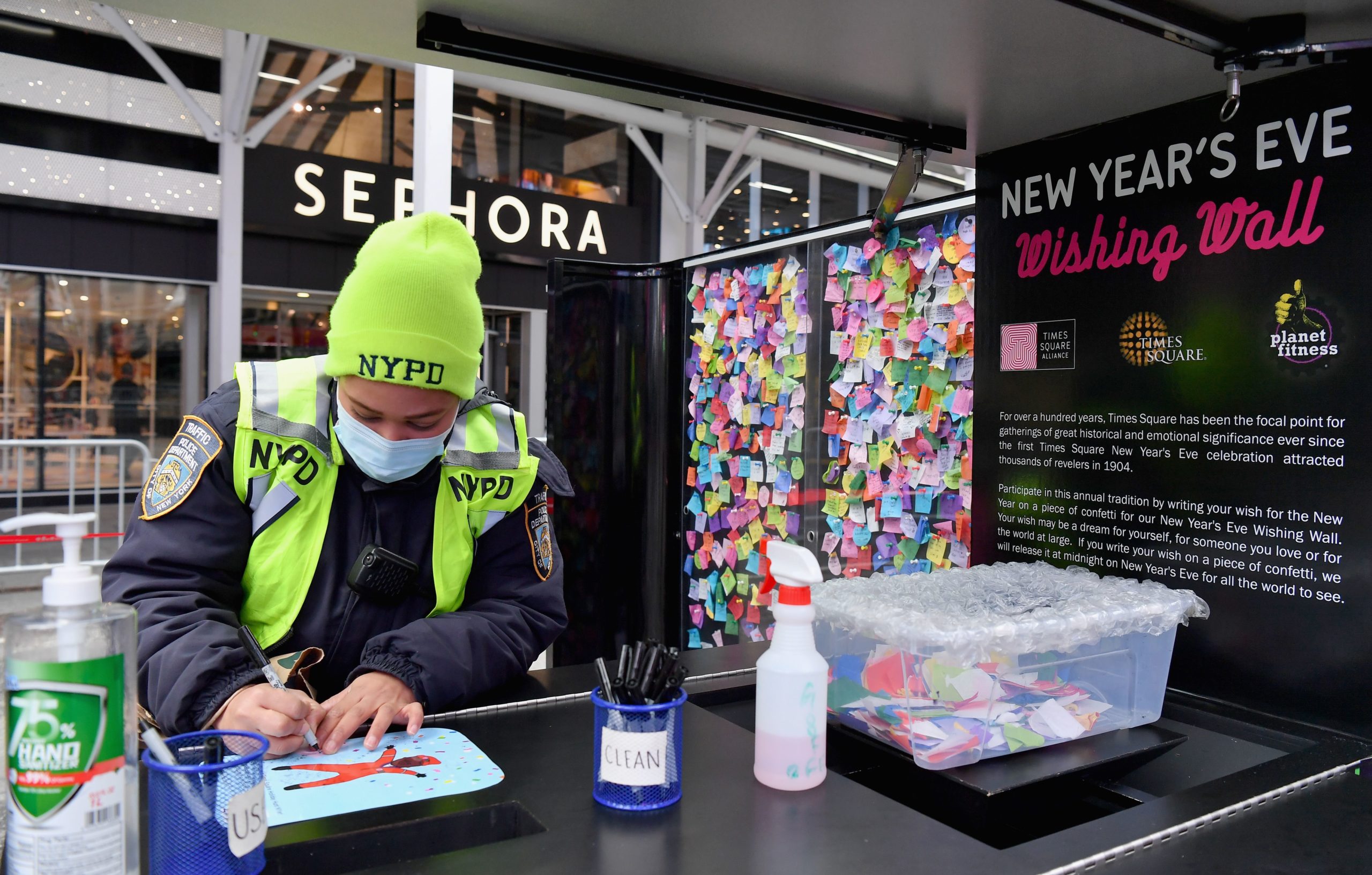 An NYPD officer writes down a note on confetti during the 14th annual Good Riddance Day in Times Square ahead of New year’s Eve on December 28, 2020 in New York City. (Photo by ANGELA WEISS/AFP via Getty Images)

Mental health has become a larger issue in the U.S., hundreds of thousands of people took the anxiety screen in the first 9 months of 2020, which is a 93% increase over 2019, according to data from Mental Health America. The data also showed that the number of people who took depression screens increased by 62% over 2019.

Violence is elevated among people with issues such as depression and anxiety, according to a study in April from the RAND Corporation.

“It has nothing to do with police funding, we have a rise in mental health (depression and anxiety) due to Covid-19 and related stress,” Ali Mokdad, professor of Health Metrics Sciences at the Institute for Health Metrics and Evaluation, told the DCNF. “Many countries have the same issue and a rise in drug and alcohol abuse. Also a rise in suicide.”

Anxiety disorders affect 40 million adults every year, according to data from the Anxiety and Depression Association of America.

Americans stocked up on equipment such as guns and ammunition as the coronavirus created shortages in supplies.

Minnesota gun sales surged over anxieties of the pandemic, civil unrest and shortages of resources.

Gun dealers in Wisconsin were having trouble keeping products on the shelves even 10 months after the first COVID-19 cases emerged. Gun sales at Superior Shooters Supply have reportedly risen by as much as 500% since the start of the pandemic.

The FBI’s data showed a total of 3.2 million firearm-related background checks. The number of firearm sales in May 2021 represents the second-highest May on record, with the first highest in 2020 during the coronavirus pandemic.

A July 2020 medRxiv study showed a significant increase in firearm violence associated with the coronavirus pandemic-related surge in firearm purchasing. The study estimated that there was a 1% increase in death and injury with every 100 excessive firearm purchases, the difference between the predicted number of guns sold and the actual amount sold.

Some critics say the increase in homicides is a direct result of America’s culture and history of gun ownership.

Gun violence is uniquely an American epidemic, America’s culture and history have made it normal for citizens to own guns, Megan Ranney, an associate professor at Brown University told the American Medical Association. “There are so many shootings that happen every day that never make it on the news, that most of us never hear about.”

“There are more than 300 people who are injured and more than a hundred who are killed every day across the United States, including during the pandemic,” Ranney said. “This is an underlying epidemic that seems to have worsened, but certainly has not gone away during COVID-19.”

People who committed gun-related crimes tended to illegally own the firearm, according to a 2012 journal of Injury Prevention study.

A separate 2013 Department of Justice survey found that 10% of state prison inmates had legally purchased a gun at the time of the crime, while another 40% of respondents said they had obtained the weapon illegally. 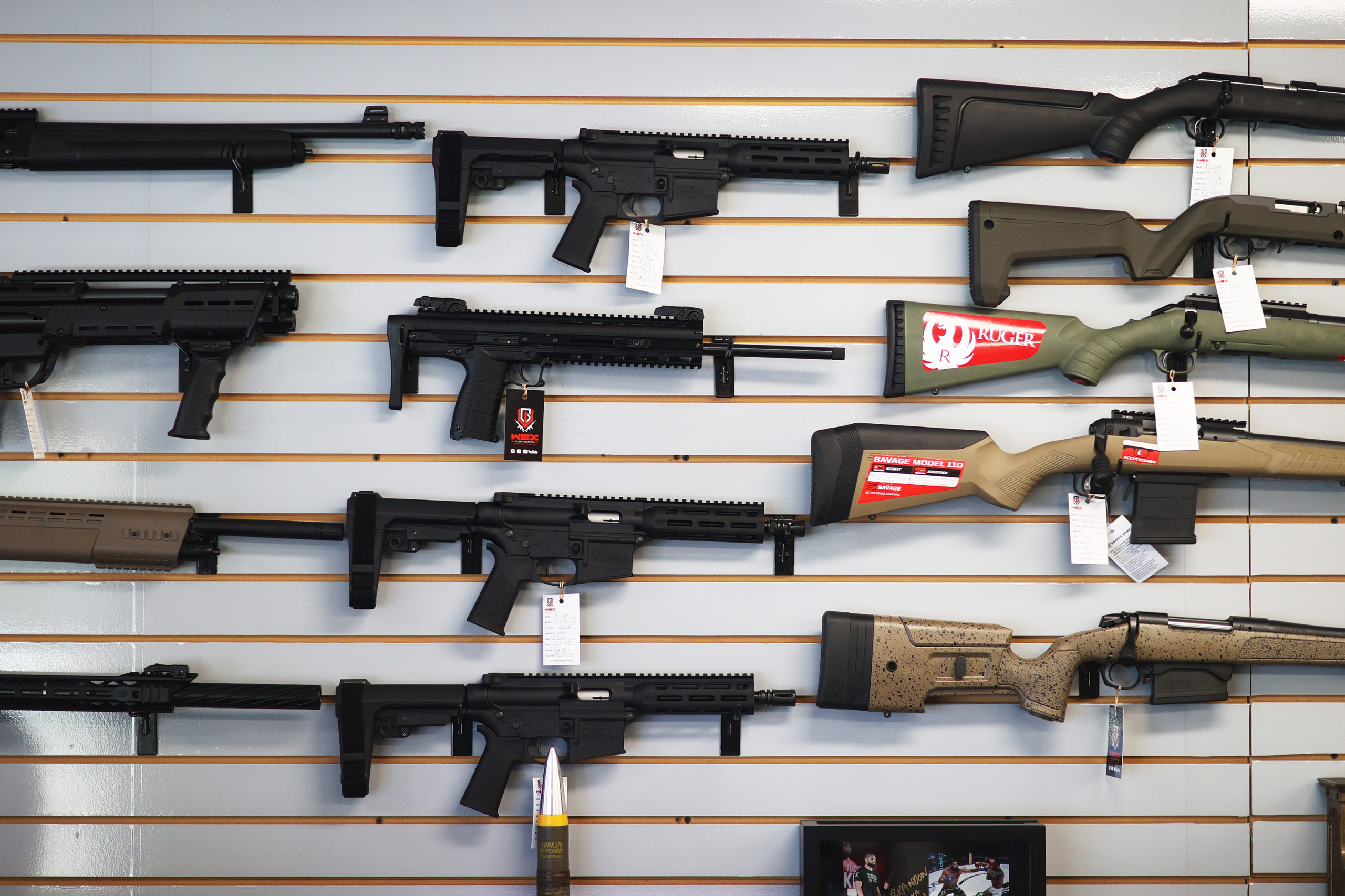 Weapons for sale hang on the wall at WEX Gunworks on March 24, 2021 in Delray Beach, Florida. (Photo by Joe Raedle/Getty Images)

After the death of George Floyd in May 2020 and the riots soon after, police morale decreased across the country, according to WBUR.

Chuck Wexler, executive director of the Police Executive Research Forum, told WBUR that policing has become even more difficult with the nationwide criticism over their conduct. “I don’t think there’s been a more challenging time to be a police officer for a whole set of reasons,” he said.

“You have these two deputies in Los Angeles who are just sitting in a car and someone comes in and tries to kill them,” he says. “So, you know, getting up every morning, putting on your uniform and sort of thinking out loud, ‘What’s today going to be like?’,” Wexler told WBUR, referring to a shooting in 2020 where a man allegedly ambushed and shot two Los Angeles County sheriff’s deputies.

A total of 179 NYPD officers retired in 2020 which is a 411% increase compared to 2019. More than 200 officers in Seattle, Washington, quit over the past year because of anti-police rhetoric, resulting in a staffing shortage.

The University of Utah College of Law observed that the rise in violence was caused by a “Minneapolis Effect,” where police diverted resources from regular policing to patrolling demonstrations, and it found a 29.6% increase in homicides because of the effect. It also found that officers reduced proactive policing, the practice of deterring criminal activity by showing police presence.

The FBI’s 2018 homicide statistics, which is the most recent year of completed data, showed 14,575 incidents occurred in major cities including Minneapolis, Chicago, Philadelphia, Milwaukee, and New York City, an average of about 1,200 homicides per month, the university said.

A 29.6% increase from the 2018 statistics would mean an additional 355 homicides per month, and more than 2,800 victims were shot due to this effect during June and July 2020, the university said. (RELATED: The War On Police Is In Full Swing. How Does It End?)

“It also seems likely that police legitimacy has suffered, particularly in disadvantaged communities of color,” Rosenfeld told the DCNF. “Reduced legitimacy means fewer people trust and cooperate with the police, which impedes police responses to crime.”

Some experts have a different conclusion, saying a decline in government legitimacy is leading to violence.

Ernesto Lopez, a research specialist at the Council on Criminal Justice, told the DCNF that it is likely that multiple factors, including police defunding, attrition and low morale, do play a role in the violent crime surge. “As police legitimacy decreases, or even government legitimacy more generally decreases, crime can increase,” Lopez said.

“This can occur because as people view government (including police) as less legitimate, they are less likely to obey the law,” Lopez said. “Furthermore, people may be less likely to report crimes to police (homicide tends to be an exception), thus reducing the ability of police to solve crime and apprehend suspects.”